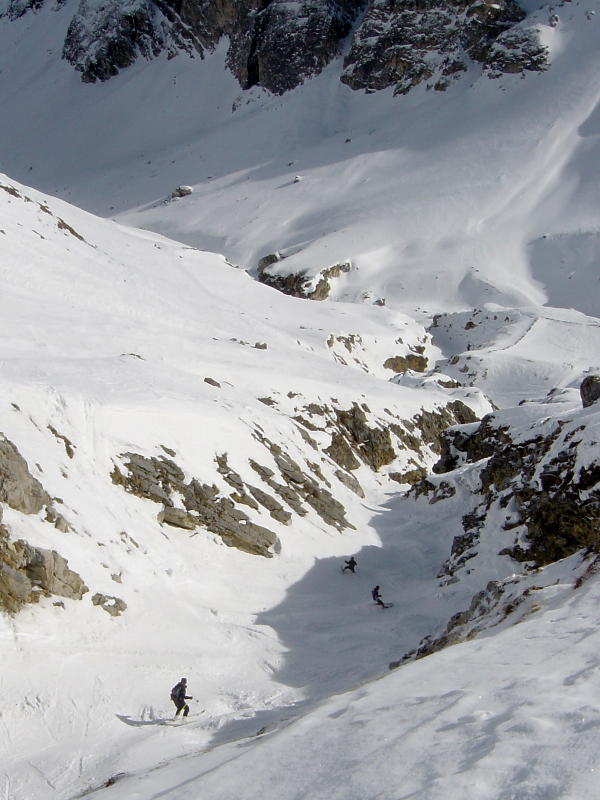 Another busy year with plenty of excitement. As usual we started with skiing. This time we went to Val D’Isère and the children didn’t go to ski school. The sun was shining, the pistes were good and the sensible “lets do a few blues and reds to warm up” lasted just as far as the top of the first off-piste run…. Eventually we hit the intersection with the black run and it all got a bit easier after that. We then progressed to downclimbing bits of the Piste Perdu on the fixed ropes and a long off-piste (a good 3 km away from any piste, which was anyway above us up a 200m cliff…) tour without a map. Next year we’re going with the cousins. Sea kayaking started in February when North Wales rivers were empty, so the Penrhyn Mawr races off Anglesey provided nearly as much excitement. The dry winter inhibited our whitewater paddling quite a lot, but we went from famine to feast at New Year and at least there was enough water for the annual Swale Charity Paddle which Andy was “in charge” of for the second year. Easter saw Andy paddling around Raasay and Rona in strong winds and lots of rain. Mary circumnavigated Lismore over May bank holiday weekend and then we all went to “Back of Keppoch” for Summer half term. Camping on the beach, kayaks ready to go, lots of safe paddling around the little rock skerries in Arisaig Bay (everyone saw an otter during the week, some saw five in one day) and the fierce sign saying “no fires” was clearly only there for show because everybody barbequed on the beach – one family had even brought a sack of coal for their beach fire. The children made friends and so did Fern. If there was a down side it was the weather which was typically Scottish (looks idyllic until you spot the white horses).

After that we managed a trip to Coquet Island, famed for the roseate terns. It was rough, we were in the doubles. There were seals: lots and lots of seals all around the kayaks. Suddenly the peace and tranquillity was interrupted by the most terrible screaming. Michael had realised that Sarah had Mary’s waterproof camera but Andy had his tucked inaccessibly in his pocket, so Michael was unable to take pictures. On the way back we passed rafts of puffins and on the beach the children found pipefish in the rock pools.

Sarah went to Sweden with the Scouts for nearly 2 weeks and she went skiing with school, this means she had more foreign holidays than Andy this year (much to his disgust).

In the summer we went to Iceland. We managed to find Steini who agreed to take us out sea kayaking with the children on an overnight camping trip. We had blue sky, friendly tide races, seals, puffins, sea eagles and they even put on a firework display (it just happened to coincide with their annual festival). Then we joined Eldhestar for an 8 day Icelandic horse ride. We had taken a few lessons but riding Icelandic ponies is rather different, the saddle goes further back and you are supposed to use your upper leg to control them rather than your lower leg and they run in tolt rather than trot. When you trek, the herd comes too so there is a large group of “wild” horses in the middle of the riders. To add to the difficulties they change your horse 2 or 3 times a day so just as you get used to the one you’re riding it is swapped. Oh, and they all have totally unpronounceable names. Andy was lent a sheepskin saddle cover whichristmas-missivech allowed him to continue riding (he did walk on the middle, 45 km+ day, keeping up with the ponies until lunchtime. We don’t talk about after that). 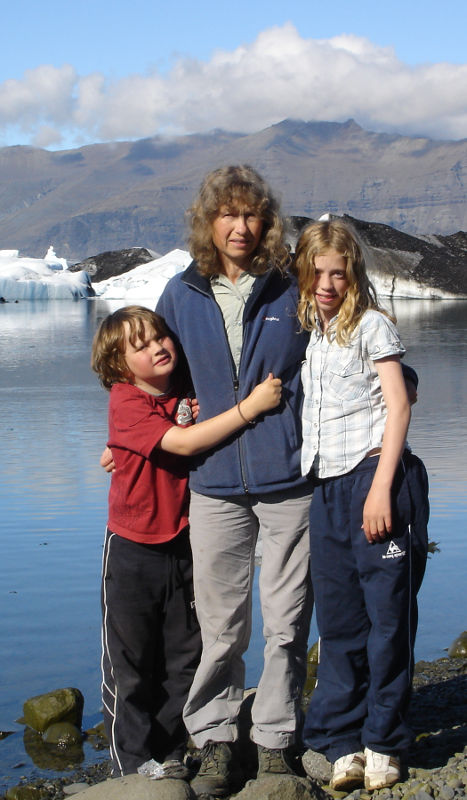 We visited some amazing places on the tour, travelled through wilderness, stayed in mountain huts and did lots of river crossings. We spent the last few days driving down the Southern coast, the scenery was amazing. There were sea arches, waterfalls and glaciers with outwash plains. The other thing about Iceland is the swimming pools containing geothermally heated water, wonderful! 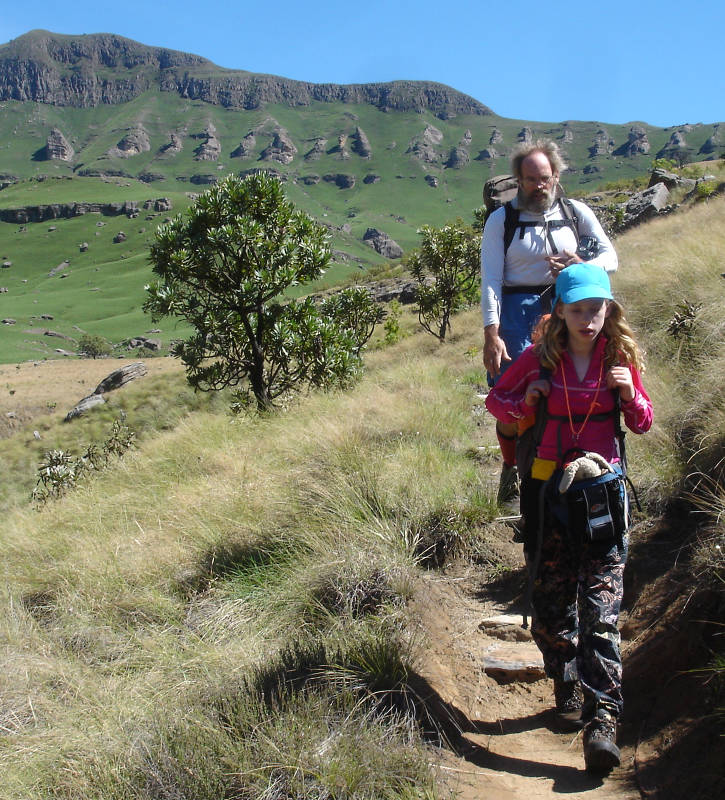 We all went to South Africa over Autumn half term. We had researched and booked the five day Giant’s Cup trail in the Drakensberg mountains. The scenery was amazing, huge sandstone escarpments all weathered into imposing towers. A day trip into Lesotho meant Andy could have a beer in the highest pub in Africa, watching the ice-rats. It had been raining lots just before we arrived so the spring flowers had all started to come out. For once the weather was too hot and dry. We found ourselves getting up earlier every day to get the climbs done before it became too hot. We saw lots of baboons and eland during the walk but fortunately the snakes kept away. We even found the bushmen’s paintings under some of the overhangs. After the walk we went to some game parks where we saw a variety of game and took lots of pictures. Mary had booked a horse safari in the St. Lucia wetlands park, we all had an amazing ride along the beach and were shown turtle nest sites. 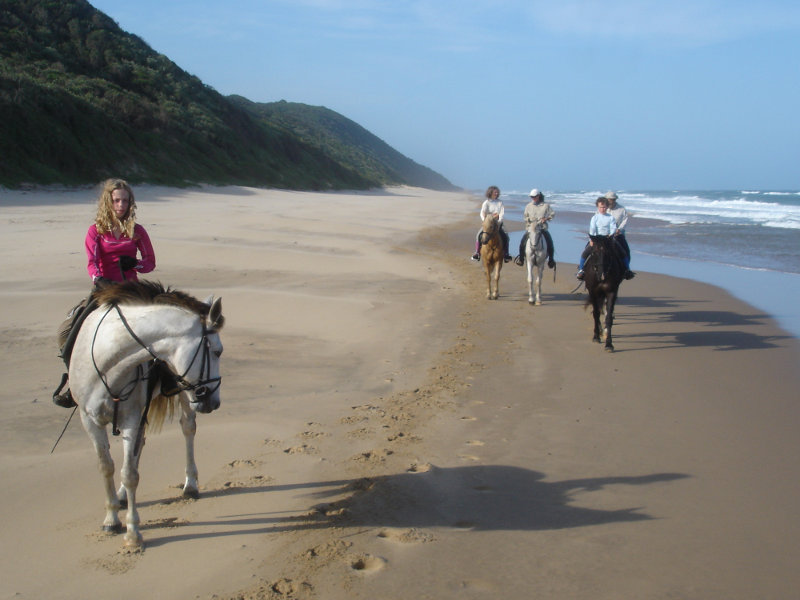 Christmas is approaching fast now, Michael is performing in the school nativity play, Sarah is attending the school disco and we’re all off to Auntie Joy’s 80th birthday party.