This year I am applying the “leave it until the last minute and if it doesn’t get done that’s just tough” approach to Christmas so I have only just bought cards and stamps and I’m only just starting my preparations now with 2 weeks to go! So what have we done this year? February half term found us in Val D’Isère along with the Florences, Chrissy and Johnny. A good week was had by all but the children no longer wish to ski with grumpy parents and don’t want to go unless we can guarantee a bunch of teenagers. Oh! and Andy and my skis fell off the back of the minibus and Andy is still having to hassle Ski France to sort out their insurance claim on the bus company, so we’re not skiing in 2010. Michael still gets to go with school at Easter. 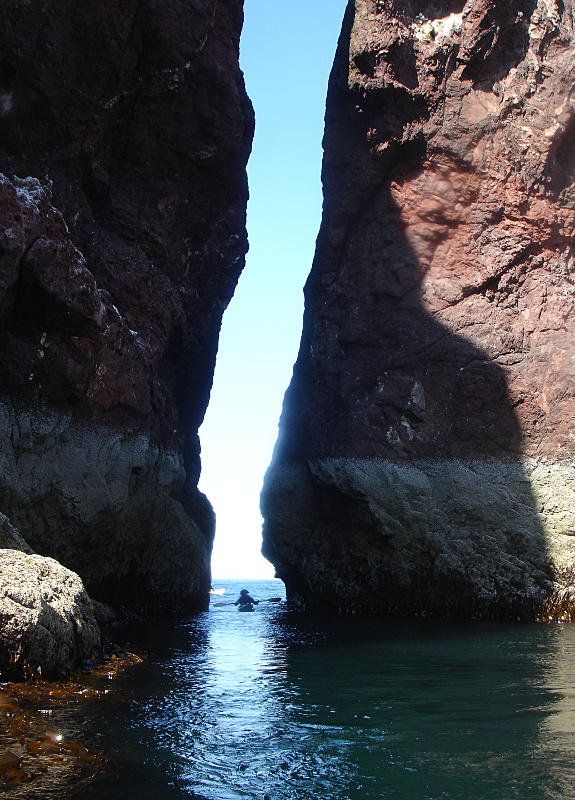 This was the year of wet windy weather over every bank holiday so we didn’t get a sea kayak camping trip but we did have a lovely trip to the Farnes with just enough wind and waves to make it moderately exciting without becoming frightening. Good puffins and seals. Andy also got out on a stunning day at St. Abbs, poking into the zawns and geos, though most of the birds had finished nesting. Sarah, Michael and I went to the Durham scout canoe camp in June. Michael found himself in the position of acting as an instructor and taught everyone (including me) several new kayak games. We also went to Aldwark canoe weekend with their school, Michael had fun again, Sarah got a bit grumpy, but afterwards said she learnt lots about coaching so that was a result. We then had the annual Durham Scouts advanced canoe camp here. This year water levels were just about right and we had the best ever day at Sleningford. Mary and Michael managed to jam the big open canoe across the top of the drop and then catapult Michael over the front and into the water, fun was had by all. Andy joined in this year, did his 3 * and FSRT so he’s no longer the least qualified member of the family. He’s even filled out his application form to help with next year’s scout canoe camps.

Sarah and Michael went to Wales with school on their walking trip. Sarah and her friend Katherine managed to get to stay in a B and B whilst all the boys had to stay in a hostel. I think they had fun. I don’t think they did much walking. Then we went to the French Alps with caravan, six kayaks and four bikes. We booked with a bunch called “Canoe Control” for some instruction and safety cover. They weren’t very nice to Michael or Mary but Sarah and Andy had a good time and the best bit was we met Bill and Nikki who kindly paddled with us during our second week, we also met up with them in Wales in August and they’re coming to paddle with us at New Year. We had one of those small-world experiences as well. Whilst messing about by the river, a voice suddenly called “Michael, Michael !” and there were the Westies, fellow SOC paddlers, just arrived on holiday but without kayaks. We had six, so Alistair and Dave joined us for a river trip and we’re now arranging a club trip for next summer. You may wonder why four people needed six kayaks. Well, Sarah wanted her pink play boat (‘cos its cool) and her bigger volume river-runner (some of the rivers might be hard), and Andy wasn’t about to take only one boat if Sarah got two. He had to make special extension bars for the roofrack (I don’t want to think about how heavy it all was). After that, Sarah and Michael went to Plas-y-Brenin for the “young peoples'” week. Sarah was playboating with Rosie Florence and Michael was doing whitewater, sea and surf. I think they will both go again next year. Andy and Mary had a week in Shetland with Glenmore Lodge. We stayed in a hostel and the week was fully catered. Luckily we weren’t camping, because it was windy all week. The good day was force 6 and the most windy day was storm force 10. We didn’t paddle as much as we’d like, due to the wind, but still managed to get out at some point every day. 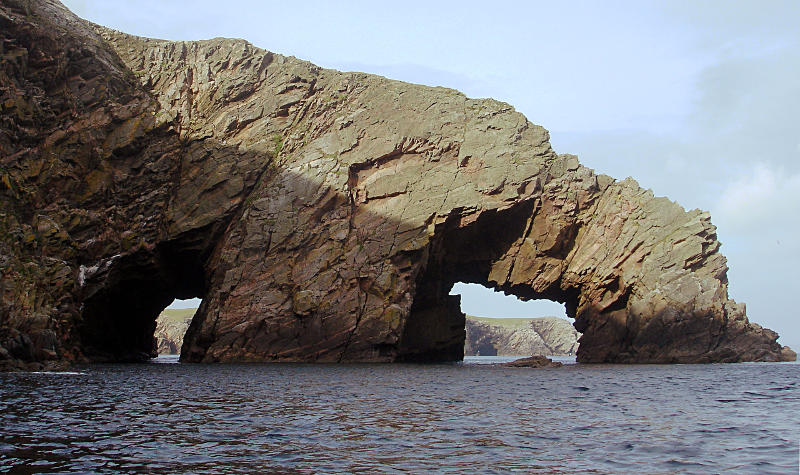 Shetland’s coast is spectacular with cliffs, stacks, sea caves and arches all over. We also saw two otters, a minke whale and two groups of Great Northern Divers. The sound of the Loons is really special and to be paddling close up was wonderful. Sarah and Michael stayed at home. Auntie Christine and David kindly did child minding duties. Sarah and Michael complained that they were made to do their homework but they liked getting pudding every night.

Mary returned to Plas-y-Brenin, this time with Gail. Of the eight participants, five had been there last year. This time Mary didn’t fall in and bang her head but Gail did, big time, and lost two teeth, she’s now got a new helmet and she’s already bored of hearing “all I want for Christmas is my two front teeth”. 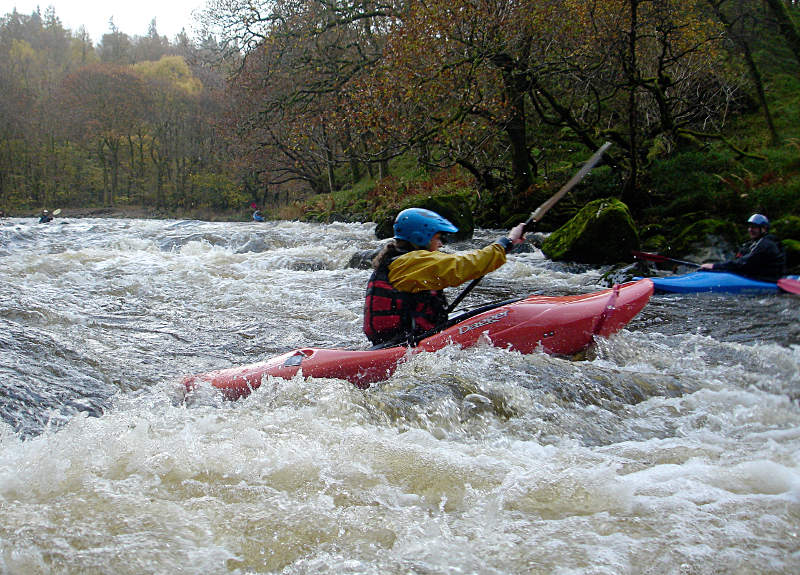 Apart from that, we’ve been getting out on the rivers pretty often all autumn, not always helped by the water levels – more often too much than too little. Andy moans that he is the only one taking photographs, so there are none of him! The building work is finished, apart from all those annoying little jobs that never get done. Mary is bored of painting and Andy doesn’t want to go to IKEA again. We still have about 40 pallets that require breaking up and burning, but that’s OK because we have a woodburning fire in the sitting room. We also now have a pizza oven (outside) and a woodburning stove in the conservatory, but the oven, in particular, is only supposed to burn hardwood. Fortunately, enough branches fall off our trees in the autumn gales… 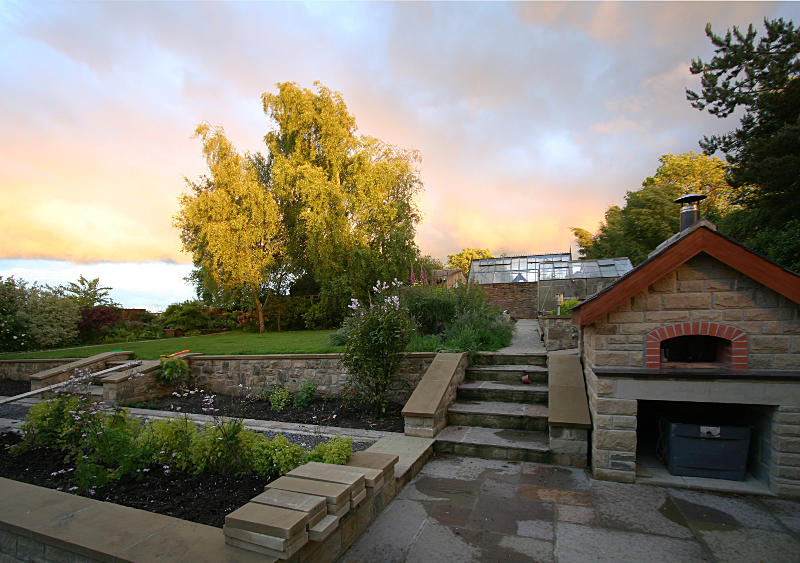 The garden is starting to look less of a building site and the new pond has four fish, Joe, Gabriel, Mr. T, and God. (Don’t ask why!)