Almost two dozen NPC members were in action on the slopes of Glenshee during Easter week, but as the slopes got more crowded during the weekend, Mike Thomas and I abandoned the lifts (provided for beginners who can’t yet go uphill) and took off for some real skiing.

The first trip was to the Cairngorms, where Bynack More was to be the target. Unusually, it wasn’t windy in the Cairngorms so, inevitably, it was thick fog above 600m instead. This made for an interesting traverse across Coire Laogh Mor, where we went too high and got into an area of boulders where skis were something of a liability. However, we eventually hacked our way to the col where the view down into Strath Nethy was particularly eerie. The thick mist meant that we could only catch glimpses of the valley floor 200m below, and what we saw looked uncompromisingly steep. We decided that it would be safer to continue up the ridge and onto Cairngorm, rather than risk the longer trek over Bynack More and down to the Saddle above Loch Avon.

The ridge was easy enough to follow, and some measure of progress could be judged by the occasional rock poking through the snow which loomed up ahead then steadily fell behind. One of the boulders turned out to be a reindeer, forlornly waiting on the ridge for the moss to reappear. A small summit provided us with a much needed landmark. Unfortunately, it wasn’t the one marked on the map, which resulted in about half an hour skiing on bearings, counting paces and generally becoming confused and emotional (much like closing time at the New Inn). Eventually the land started to conform to expectations and we ascended the final slopes of Cnap Coire na Spreidhe, confident in the knowledge that we would find the Cairngorm weather station at the top.

The rather diminutive cairn came as a disappointment and maps, at all scales available, were hastily consulted. A reconstruction of our wanderings led to another bearing, and off we went. Now, skiing in a straight line in 5m visibility is a skill only mastered by a few. We are of the many, and continually slewed off to the right, bringing ourselves very near the head of the Coire na Ciste ski tows. Sound carries very well in mist, so the sounds of merriment and jollity as people were disgorged from the tow and fell over in the mist were a strange contrast with the earlier silence. We skied with this noise for half a kilometre with no sight of its source, then pylons suddenly loomed out of the mist. The final slog up to the real summit was fairly straightforward, and we were soon removing the skins for the run down into Coire na Ciste. By now, the lifts had closed, so we had the slopes almost to ourselves. Perversely, we had hardly started the descent when the skies were swept clear and the sun came out, revealing the whole of the ridge we had climbed. Had we wasted just a little more time, we would have had superb views from the top !

Since everyone who had stayed at Glenshee had been in the sun all day, we decided to avoid another “educational” day at excessive altitude, and ski the lower peaks to the west of Devil’s Elbow. Starting early from the car park, we skinned up the piste to the Cairnwell. Though only a few tens of metres from the top of the Chairlift, it is surprising how few people actually take these last few steps to the top. Skiing back towards Butchart’s corrie, we tried to maximise the speed to get up a small summit at the top of the slalom course. Then we bid farewell to the groomed and crowded pistes and headed west. 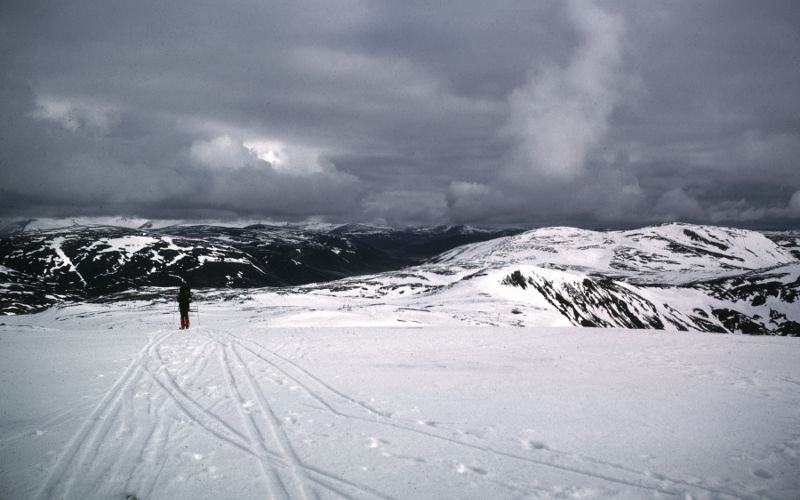 This is a gently undulating ridge, and the skins went on at the first col. Here, two nordic skiers overtook us, having no need to don skins and thus demonstrating the superiority of skinny skis over very gentle terrain. We set off in lukewarm pursuit, and caught up at the summit of Carn nan Sac. Here there were quite a few tracks of like-minded skiers. Another 1.5 Km west brought us to the Munro summit of Carn a’Gheoidh where we removed the skins – the next bit would be fun. A 300m descent on the north side of the ridge gave us the best snow we had skied all weekend. The final section down to the col above the Baddoch Burn had us picking a careful line down patchier snow, but we were able to ski right down the col. 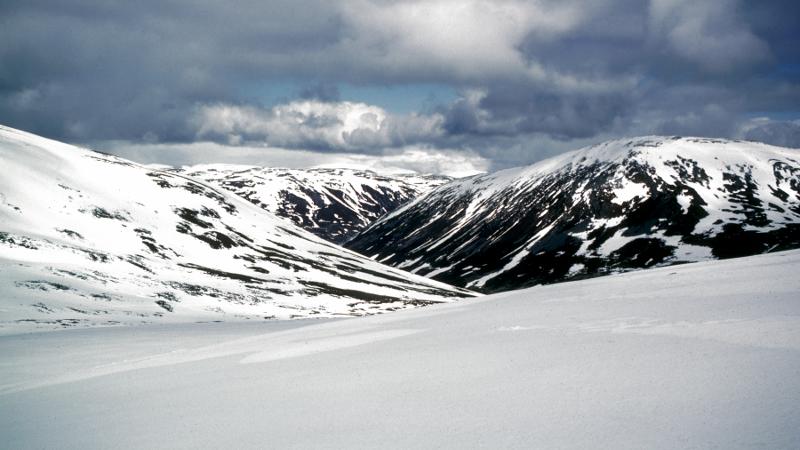 The ascent over Southeast-facing slopes was on soggier snow, but over the ridge of Carn a’Chlarsaich, we had another excellent run down to Loch nan Eun where we skied to an island and had lunch. 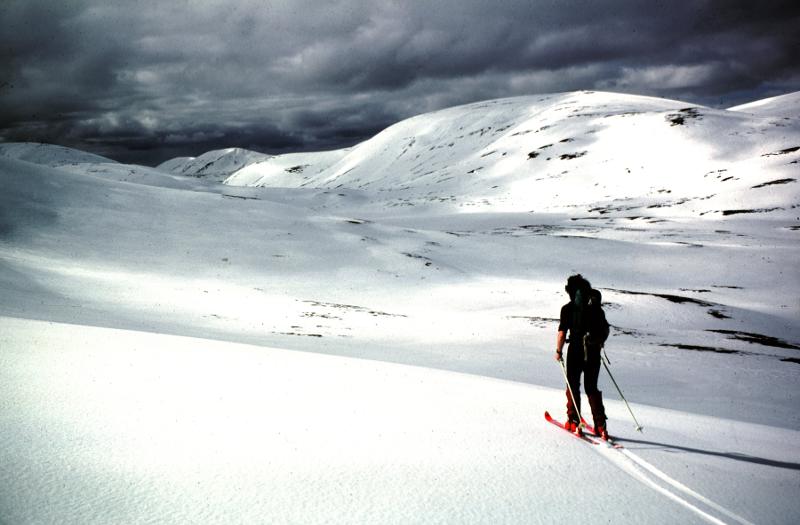 The smooth flat snow surface of the loch was too much of a temptation, so we skied the half kilometre across the middle to start our ascent of Glas Tulaichean. 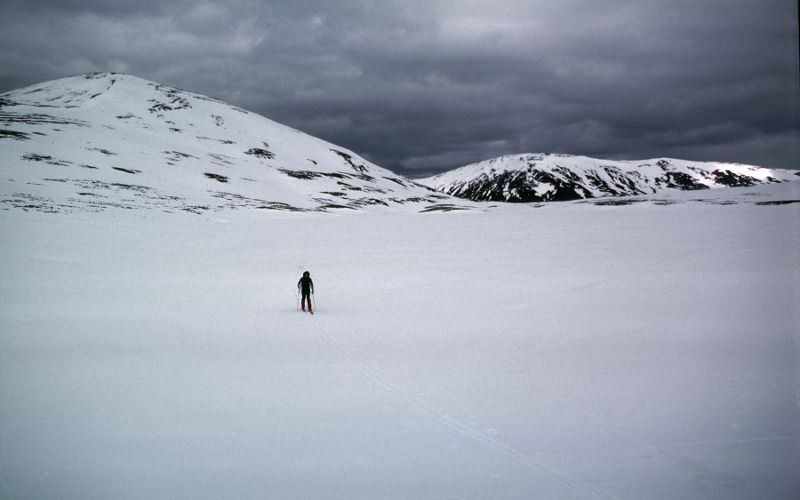 From a shoulder half way up, Beinn A’Ghlo came into view – another superb ski mountain and a definite ‘must’ for next winter. The last section of our ridge was quite steep and it was a relief to finish the uphill for the day as we reached the trig. point. The view across to the Cairngorms was superlative and such a change from the previous year when I had climbed the mountain in 15m visibility and pouring rain. 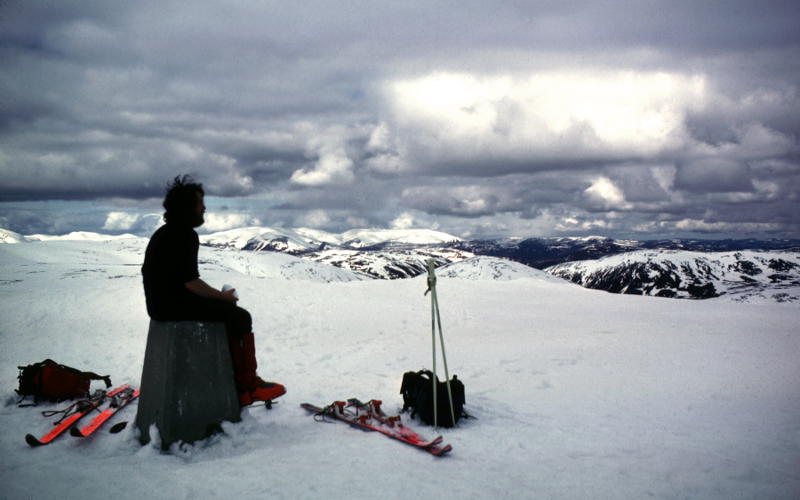 The corniced summit ridge curved round to the Southeast towards Glen Lochsie and gave excellent skiing for a while. However, late afternoon is not the best time to ski down to the snow line in a gentle traverse, and the snow soon became heavy. South of Creag Dhearg, we dropped into a small valley and kept on ‘interesting’ snow in the stream bed for quite a way below the general snow level. A short hack down the heather then brought us to the Glen Lochsie path and the cottages.

Easter Monday saw us seeking the high plateaux in search of good snow, but once at Spittal of Glen Muick, the lack of snow low down decided us against a long horseshoe. Instead, we carried skis up the path to Lochnagar until finally, at the col, we could put on the skins and get back to business. As the gradient steepened, we sailed past a couple of nordic skiers who were continually sliding back and falling over. A final steepening brought us the col south of Meikle Pap, where we were greeted by a stupendous vision of the cliffs and gullies of Lochnagar. Three traverses linked by kick turns brought us to a rocky area where harscheisen were really needed. Since Mike didn’t have any, we removed the skis and hacked our way onto the gentler ridge above with the ice axes. The remaining two kilometres round the corrie rim to Cac Carn Beag were excellent skiing with fantastic views.

The view indicator on the summit suggests that you can see peaks from the far north to the Cheviot, 90 miles to the south. However, heather burning and haze ensured that we could ‘only’ see about 30 miles in all directions. In particular, we could see countless acres of snow, all above 900m, and dotted with small parties of ski tourers.

Another long descending traverse took us to the south, then east of Cuidhe Crom from where we could follow Northeast-facing slopes down towards our day’s starting point. The snow was getting heavy again, resulting in one or two spectacular head-plants. Again we found patchy snow in the stream beds so we skied well below the general snow line. Starting to walk out back to the main path, I stopped just short of stepping on a snake. It was quite a laid-back Adder, and only decided to move when Mike arrived. The walk back to the car was quite a slog. I’m sure that the way to solve this is to carry the skis up nearer to the snow line on the mountain bike – but that’s another story !