We were in too mixed a bunch of kayaks to compete in the race – Doug in his white water boat, myself in the new Cormorant and Heather (a couple of years older than Sarah) paddling Geyrfugl. Those not racing get a somewhat later start, so the channel is that bit deeper and wider and the line less critical. We did find that cutting corners led us into slower water, so those who know exactly where the deepest point of the channel is must have a distinct advantage in the race. We were going quite fast enough, thank-you – we were hardly paddling at all as the tide carried us under the bridge (though some steering was very necessary to avoid being smeared onto the bows of moored boats) at a speed of 7 knots by the GPS. 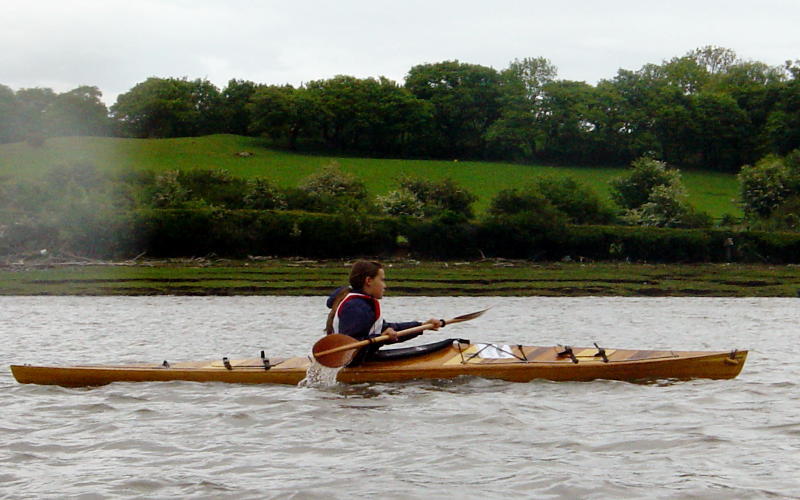 On Saturday morning we made our way along the south shore of Loch Sunart until, a short way on the minor dead-end road, we found a suitable beach and parking spot. Here we packed the boats and shuttled cars to the Lochaline ferry terminal where we parked them out of the way. We were still off fairly early, and paddled west toward the Sound of Mull. It was dry while we were packing up, but did look a little threatening. 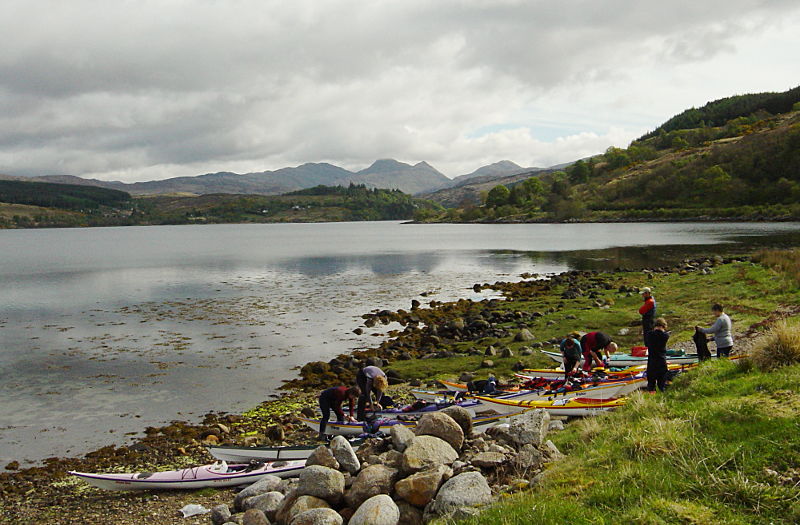 Packing boats on the shore at Loch Sunart

Although the road soon ends on the south side of the Loch and it seems quite remote, there are a lot of fish farms to skirt round, and some brief bits of current at the narrows. It felt cooler after our lunch stop with heavy showers. 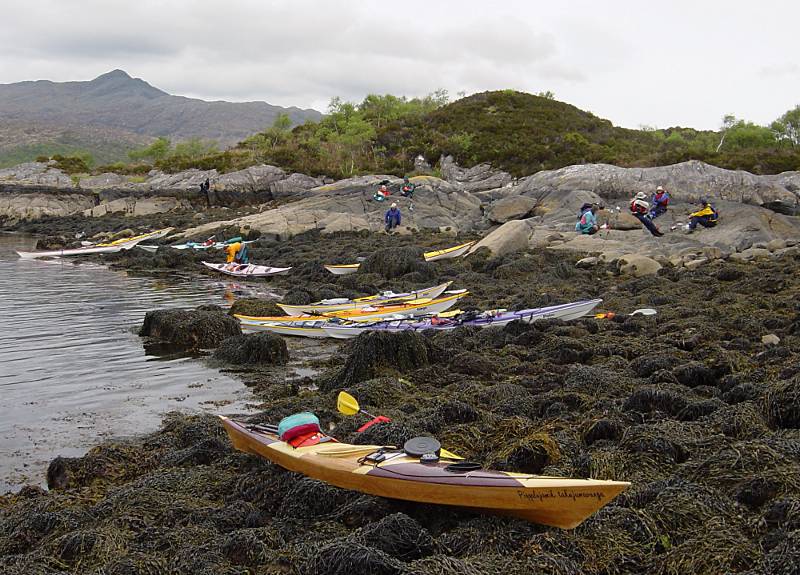 Down the Loch, we turned down the side of Carna and headed against the quite strong tide into Loch Teacuis (a bit of eddy-hopping here) to look for a campsite. All that’s needed is a small patch of ground that’s neither rock nor bog and is above the high tide, but this was not as easy as you’d think, as this area is both rocky and wooded! We eventually cut back towards Loch Sunart on the other side of Carna, and found a spot on a little island between Oronsay and Carna.

The rain started in earnest as we put our tents up. Pete and Wendy’s tarp rigged as a shelter gave us some respite from the weather whilst we were cooking, but we gave up the social scene a bit earlier than usual and scurried off to our tents. 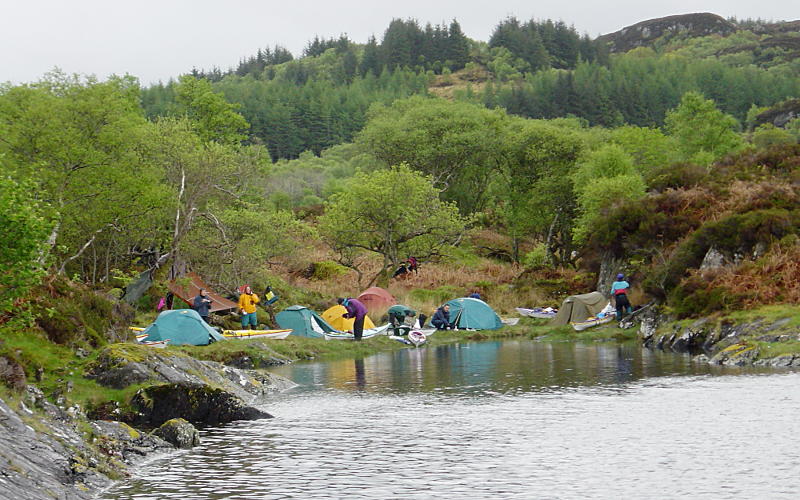 Camp in the rain between Oronsay and Carna

Morning brought an end to the continuous rain, just the odd shower, but these could be quite squally at times, and even in the bright intervals, it was at least breezy leading to rather more challenging sea conditions. Anna had already decided that we would stick to the east shore of the Sound rather than crossing to Tobermory. We stopped for a break on a little shingle beach at Auliston Point, as everyone was a bit chilly. Firstly you get warm by looking for wood, then try to figure out how to get it to burn. By the time we were ready to resume, Andy and Clive had a nice little fire going, and it seemed a shame to leave.

Heading south into the Sound of Mull, Claire was keeping close inshore – did she know something we didn’t? Suddenly she was pointing madly at something in the water, an Otter crunching on a fish, right in front of her boat. Later we all watched a pair of Otters playing and feeding only feet away from us. We needed to get far enough down the Sound to get a bit of shelter from Mull itself and be within an easy day’s paddle of the cars, but didn’t want to be so far that we were next to the road. There aren’t many beaches, and we found an awkward landing but a raised grassy site with bluebells and primroses. Nearby was a wood to gather fuel, and an interesting old ruined chapel to go exploring. Nick lit the fire after we had eaten and in the conditions, a small one didn’t seem appropriate. A decent bonfire warmed us through (and a bit more running around for more wood did no harm) some managed to get gear dry, if a little smoky. There were still some sharp squalls, but a good sunset and a couple of fantastic rainbows over the islands in the sound. 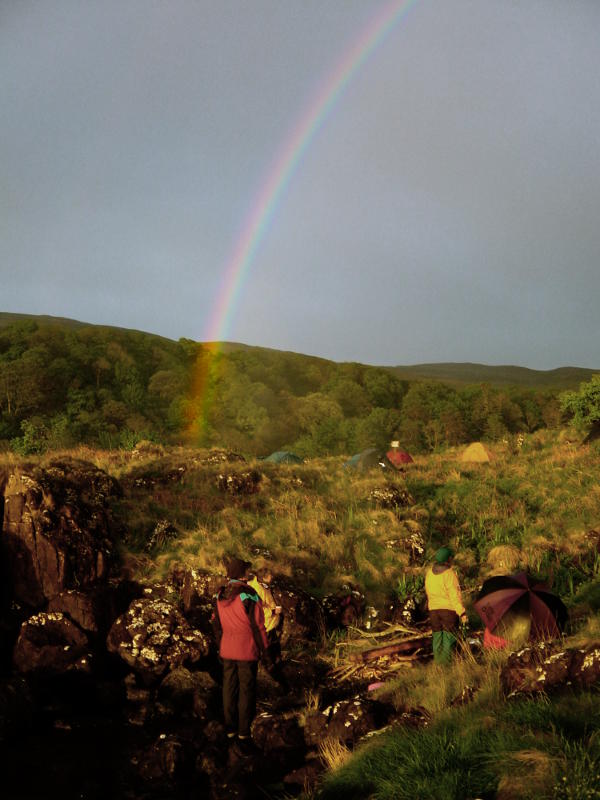 On Bank holiday Monday, the wind was from the West imposing a short chop on the swell running down the Sound almost with us. This made it made it tricky to hold our Southerly course but those who were comfortable in the conditions were soon catching waves to surf. We watched one of the ferries to the Outer Hebrides go past and thought no more of it for a while, keeping fairly close inshore. After what seemed a long time, the wake arrived, giving us quite a big beam sea as the waves steepened in the shallow water. Sunshine and showers over dark hills and reflecting waves always makes for a dramatic scene to paddle through and in quite a short time we were at the ferry terminal at Lochaline, shuttling for the remaining car from Loch Sunart and on our way home.