As the wet spring continued, Andy was woken by the news that Dave was looking to paddle some spate becks in Teesdale, including the elusive Eggleston Burn. An opportunity not to be missed ! We started with Bowlees Beck, where the waterfall at Gibson’s cave was crashing down spectacularly over its full width. Dave and Andy elected to put on below the next drops, setting up safety for Jamie Conn, who made it look… quite difficult. Good decision. The rest was fast and furious down to the carpark, and on to the next venue. 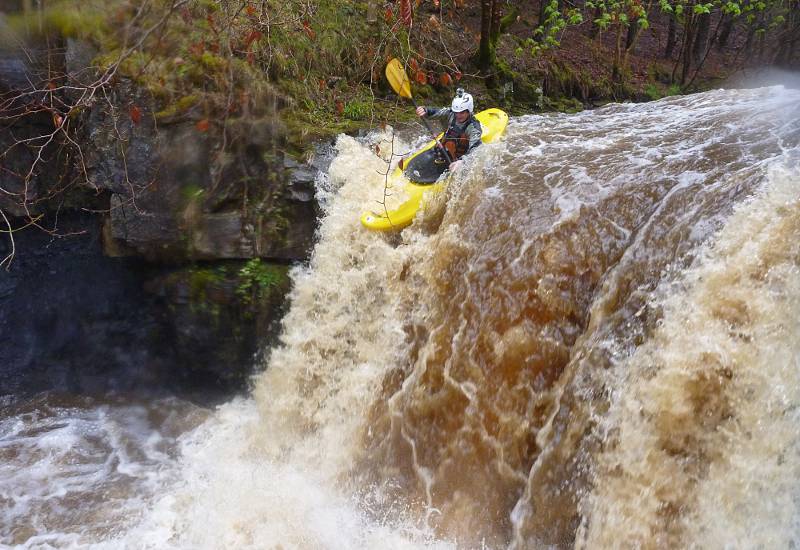 The drop under the bridge at Middleton looked a bit meaty, and with an awkward portage in prospect a bit further up, we chose to paddle a one kilometre section in the middle of Hudeshope Beck, with a couple of drops and a fast schuss under a bridge round a blind bend which we’d failed to eyeball, as we had parked the car above it. The first drop caught Andy out, as he landed perfectly then caught something unexpected on the outflow, and found it too fast and shallow to roll. One down.

The next drop is the big one, and Jamie favoured a line left, which looked a bit bruising, so Andy chose to boof on the right, whilst Dave reserved judgement and watched. Andy’s line worked for him, so Dave followed, and found that a swift roll at the bottom of the fall ensured his survival too. 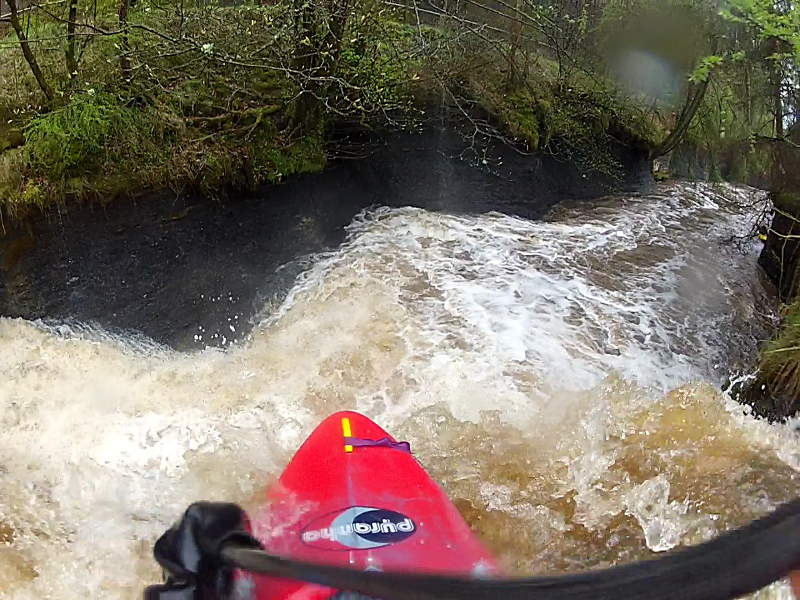 More fast water, then a last eddy on the wrong side, below the car. Drat. Send a probe. The probe (Jamie) lived to report back, so Dave (it was his turn) went next and looked OK as far as I could see round the bend. Andy came last with the helmet camera and got a bit low in the take-out eddy, but graunched over the rocks to make it to the car. The wave on the blind bend – easier than it looked!

Finally we headed up to Eggleston Burn. This was a bit higher than when Dave had run it two weeks earlier, so we were a bit nervous. The flattish first klick went well, but eddies were noticeable by their scarcity and the difficulty in staying in them. As the gorge narrowed down, Dave blinked first and decided to get off. Andy swiftly decided he’d better follow suit. Jamie, veteran of some epic descents, just carried on solo. His video is on vimeo, and, suffice it to say, looking at that, the SOC contingent considered their unanimous decision to walk out to have been a good call. Oh well, next time !

Video from Bowlees Beck and Hudeshope features in the “Ditches compilation”:

The SOC mailing list proved its worth again here, with some members busy organising an evening trip to the Washburn. But as the weather was foul, John Wootton put out a suggestion that perhaps a real river was on the cards. Andy agreed, and the pair met up at 6:30 at Yockenthwaite (since both had independently arrived early and decided to have a quick drive up Langstrothdale for a reccy). We decided it would be best to take out here, and shuttled boats up to the top. We’d already unloaded the boats before we spotted that Greenfield Beck was quite low, but Oughershaw Beck was well up and perhaps if we’d looked first it would have been worth taking a look for a higher put-in. Ah well, next time perhaps. Putting on at the confluence, there was enough water to avoid a scrape and all the drops were good fun – so much so that some begged to be run twice. Or three times. Nonetheless, it only took us an hour to be back at the cars, and in for a swift pint at the George. Just as well, perhaps, as the hill fog was right down, even between Reeth and Langthwaite, and it took Andy an hour longer to drive home than the outward journey. 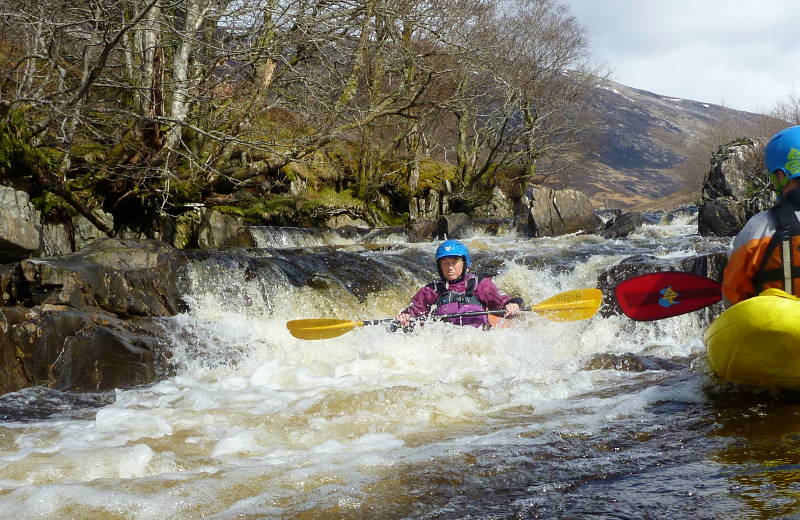