There are various blog posts about boat building and boat modifying – but blog posts aren’t the ideal way of capturing the process of boat building when both building and testing occupy so many individual days. The old (vintage 2002) website probably did a better job of documenting things with no “event date” like the rationale for building a boat or the design process. That’s especially the case for boats which have not actually been built yet. So this section of the site is to move the 2002 stuff into a modern presentation, and bring it more up to date. There are two boats that I have built, one that has been designed and bits of work done on it by way of experiment, two commercially built fibreglass boats that I have modified significantly, and various other bits of hardware. Some aspects of the built boats are to my own design, details of which others may find useful. Everything is now gathered together in this new part of the website… 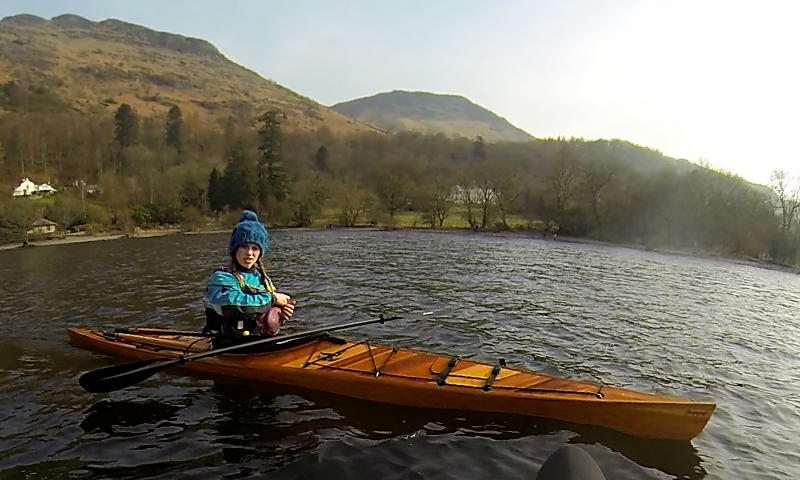 Geyrfugl was the first sea kayak I built, for my daughter, then aged seven, but carefully sized to be suitable as a daytripper even when she was adult. I didn’t work continuously on the build process which therefore stretched over seven months. Sarah has probably grown a little bigger than I’d calculated using official child growth charts, but the boat is still a good fit. It also proved possible (more by design error than intent) for me to fit in the boat, so there is first hand detail on paddling the kayal. For any of those paddling her, rebuilding the cockpit with a recess and knee braces would be an improvement, however.

Although I had some fun paddling Sarah’s boat, I was really 40 kg too heavy for it, so the next project was a boat for me. As I already had a commercially built fibreglass boat good for trips up to a week, I had a choice between building an expedition boat for longer trips, or a lighter and more “sporty” day boat, which would also double as a boat for longer trips for lighter members of the family. As I was busy developing my own design for an expedition boat, but it was not ready to build, I picked Squeedunk Kayak’s “Cormorant” design (a stitch-and-glue boat) and modified the design to be a little smaller, with a more rounded (and to my mind, elegant) strip deck. Building her was considerably quicker than Geyrgfugl. I really enjoy paddling my own boat and she has proven to be capable of carrying enough gear for a week if I only have a half-share of a tent and cooking gear…

Even before starting on the Cormorant, I had an idea to build a boat for longer trips, and I wanted this to be something rather out of the ordinary. Most modern sea kayaks owe their origins to the skin-on-frame boats of Greenland, most especially the boat brought back to the UK by Ken Taylor, and surveyed by him and Duncan Winning. Drawing were widely circulated, and a modified version was built in plywood, which became the basis for Valley’s Anas Acuta. An entirely different tradition of skin-on-frame boats evolved on the other side of North America where the Aleuts hunted in the open ocean. Enslaved as a race by Russian Fur Traders, the boats became known as Baidarkas (a Russian name) and changed form as steel tools became available to the builders. A few people have built replicas and more modern designs developed from these origins, and one designer in particular, Rob Macks, has produced a series of boats which are at once both beautiful and very seaworthy. A boat in the Lowie Museum, surveyed by David Zimmerley, has proved to be the most popular starting point, and I made this the basis for my own design, which became known as the “Borealis project”. A decade and half on, the boat is still not built, though some work has been done (and a strongback was set up years ago and is just waiting for work to start). 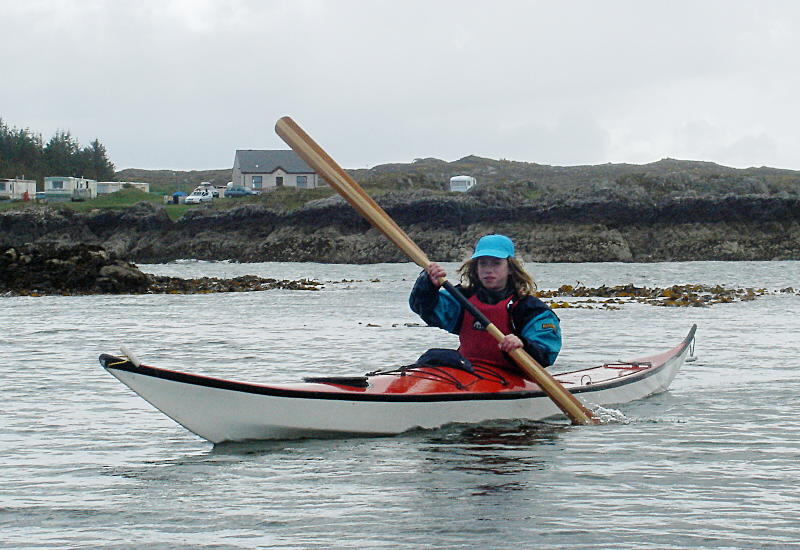 The Anas was the earliest design of fibreglass sea kayak produced in the UK, and our club, the Swaledale Outdoor Club, had an early model. It’s a brilliant boat to paddle in rough water but “early model” (early 1970’s) meant “tiny cockpit, no bulkheads or hatches”. The club had had one or two epics with rescuing people when the boat had capsized, as it was much harder to empty the water out and put the paddler back than modern boats. My solution to this was to fit bulkheads and hatches, and replace the rather amateurish deck fittings which someone had added (and which now leaked water into the boat) with rather stronger and more permanent ones of my own design, giving a rather more complete set of deck lines. Tragically (in my view) the boat remained less popular than beamier beginner boats and the club sold her in 2018. I would have bought her myself if we didn’t have a “four boats per person” rule at home, and I’ve already got seven… Both the bulkhead and hatch upgrade, and, later, the recessed deck fittings, are written up as a single blog post.

Still not having built an expedition boat (and still tweaking my design fifteen years on) I was mindful of the much quoted maxim that if one hadn’t paddled a Nordkapp, one would always wonder if one had missed out on the best expedition boat ever designed. However, Nordkapps had developed a reputation for being very unstable and difficult to paddle. Valley reckon that the boat had gradually transformed over the years as moulds were replaced, so that they had been producing boats that increasingly did deserve that reputation. The Nordkapp Forti was designed by going back to one of the earliest boats and reproducing the shape, and was supposedly a much better design. However, new ones are approaching three grand, and this is not the sort of money you would lash out on a boat just to see if was any good. The solution, for only £150, was to buy a very early Nordkapp HM and start to hack about with it. It’s actually a very good boat, but work is still in progress. The work so far is reported in this blog post

This is a more radical design – for a whitewater playboat, not a sea kayak. Playboats have been built in plywood, a very unlikely idea (hence the names “Spurious” and “Facetious”) but this was intended to be a stripper. It’s loosely based a Fluid’s “Flirt” (hence my name “Promiscuous”, partly in homage to Mike Allen’s boats) , though the design was worked up before I had access to an actual boat to measure. It is not entirely clear that it is buildable in strips, and having got a real (plastic) playboat, and since I’m not actually brilliant at playboating, it remains on the drawing board.