The maiden voyage was 2003-04-09, on Ullswater, when I did a 7½ mile paddle in flat calm conditions. I managed 7.4 km/h average, coincidentally exactly the same speed as I had paddled Geyrfugl over a very similar course the previous October in quite choppy conditions. I paddled the Cormorant early season when less paddling fit, and using smaller Kinetic Touring blades, rather than the Nordkapp blades I had used in October, but formed the impression that the new boat was a little more sluggish, much as I expected from a hard chined boat of greater design displacement. A couple of shorter paddles at the weekend after opening the skeg slot suggested that the boat produced significantly more wake than Geyrfugl when paddled hard, so the wave-making drag experienced at higher speeds does seem to be greater. However, with another paddler for a pace comparison, I didn’t paddle quite so hard, and the boat is very easy to drive at cruising speeds. She also tracks amazingly well – much better than I had expected – this is the only boat I have ever paddled where you can simply stop paddling and the boat will continue on a straight course. She responds well to a lean and carves a turn well at speed, but is quite an effort to spin when stationary – I had expected her to be a little more manoeuvrable at low speeds. 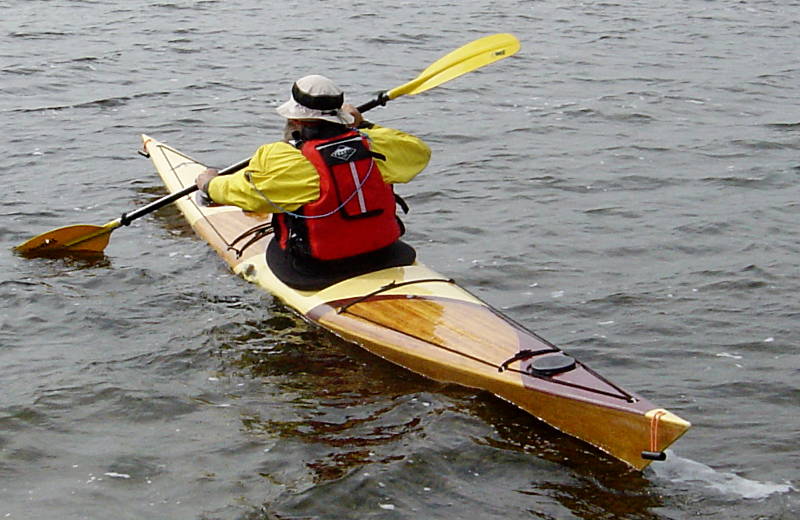 When stationary, she seems to be fairly wind-neutral, but weathercocks slightly when being paddled. The weathercocking is most noticeable in a quartering sea, and she wanted to broach when we were overtaken by a squall on Lake Bala. When the drop skeg is fitted, this should be exactly what is needed to counteract this effect, and enable me to continue putting all my effort into forward paddling. This is just as well, since at 52 cm overall beam, she feels quite tippy when stopped or slow moving in choppy water. A sea trial will be needed to see how she handles in a swell, which may be bigger, but should be less steep.

Having a bigger displacement than Geyrfugl, and a more pronounced sheer, it is no surprise to find the bows ride higher and a much drier ride results. With the boat empty of equipment, and no split paddle on the aft deck, the trim is perhaps slightly bow heavy. A trial pack shows that I can readily get gear for a long weekend into the boat, though she would be expected to ride a little low in the water with me paddling – the design displacement makes her about right as a day boat for me, or a tripping boat for lighter members of the family.

An eight mile paddle on Derwent Water 2003-04-15 with the skeg fitted, and quite a lot of gear stowed (but not a full weekend’s camping load) was revealing. With a bit of breeze (but no squalls) and some reasonable waves, the boat doesn’t track quite as solidly as she did at the weekend, but dropping the skeg seems to counteract the broaching pretty well. Using Nordkapp blades, I managed to circumnavigate the lake at an average of 7.6 km/h, but this paddle involved quite a lot of very shallow water, where the boat really slows down, so that figure is undoubtedly an underestimate of the pace I could maintain in open water. Over one section, I managed to maintain over 9 km/h for quite a way as I worked to overhaul a motor boat – and this was directly into the force two to three headwind. With the load, the ride was a little wetter, but the stability was quite reassuring.

Well, I would have liked to start with a day trip in calm seas, but as fate dictated that the first opportunity would be a four day trip and the weather looked calm, I decided to take the risk. As it turned out, there was more wind than we had expected, and the two mile crossing from Great Cumbrae Island to Bute was across the incoming tide (from our port side), with a wind from the starboard quarter, making for a steep chop, though not too big. With the skeg now fitted, she was tracking well, and I was starting to relax, about two thirds of the way across and within sight of calmer water when I was caught unawares and flipped. Paddling in just a T-shirt (and PFD), I nevertheless managed two attempts to roll up, but they were a tad too hurried, and I had failed to retract the skeg, which would have helped. I got a good breath, but eventually decided this was not going to work. Not an auspicious start. Back in the boat, I paddled very hard to warm up, and never looked back. Just like a white water trip, once I’d swum, I relaxed and paddled better.

Round the east side of Bute, the boat handled beautifully in the more sheltered waters, and into a stiff headwind at the Kyles, I easily outpaced the bigger boats. Another open crossing at the end of the second day went well, though the wind was dropping by this time. We had got round faster than expected, and the weather was forecast to get worse, so we decided to cut and run, with a five mile diagonal crossing of the Clyde back towards Largs on the third day. As we left the shelter of the point into open water, the waves were bigger, but not so steep, and the boat rode them well, as I started to relax and not fight it. By a mile out, the wake from the Isle of Arran ferry coming from port quarter added to the swell from the port bow, but the wind was less and it got progressively easier.

The next day out was with a light load – just some safety gear, a change of clothes and a bit of food on a short paddle. The forecast weather for the Conwy ascent had us envisioning a strong headwind against a fast tide through the estuary, but on the day the wind was not significant and the steep chop that we had worried about never materialised. The tide for the first two miles was very fast – about 7 knots – with lots of moored boats to avoid and some very interesting boils and cross-currents. The boat felt quite tippy and unnerving through some of this, but I remember exactly the same feeling in my fibreglass boat through the Swellies. I think it is more the disorientation of suddenly being moved sideways than any actual heeling moment. The rest of the trip was a breeze – very relaxed going with the tide. Geyrfugl also went on this trip – paddled by Heather Florence, who is just about the right size.

Next trip: well, the next trip was a six-day expedition to the West of Mull. I reckoned I’d paddle the Cormorant if the weather looked OK, and if I could be really minimalist with the gear. Everyone else would be in NDK Romanies or Romany Explorers, so it was to be an interesting contrast… The weather was less than OK (mostly force fives) and the boat pretty heavily loaded. It does superbly into a big head sea, but is unnerving in a quartering sea with lots of chop, or reflecting waves. It did really well rock-hopping along the west of Iona and the Ross of Mull. By the final day, surfing white horses up Loch na Keal, I was starting to feel pretty confident, but seeing as I was getting ahead of the others, slowed down to wait. Whilst turned slightly to look behind me, I didn’t react fast enough to a steeper wave, and over I went. A successful roll up was rather spoilt by going over again before I’d got a breath, but at least it shows promise.

A day trip with the boat completely empty out to Coquet Island on the North East coast of England had little wind, and not a great deal of swell, but I had a really nervous day which I can’t quite explain. A two person paddle out of Ventry Bay in Kerry, Ireland, ventured almost out to the Atlantic swell, and the bay proved an excellent place to practice rolling in both the Cormorant and the Mistral. In County Clare, we had a while on Fanore beach playing in the Galway Bay surf – surf landings are a little unnerving on a crowded beach where you can’t afford to lose it, but the boat performed faultlessly both on launch and landing.

August 17th was to be a long-planned trip to the Farne islands, but a promising inshore waters forecast 24 hours ahead of time didn’t agree with the conditions we observed driving up, and a call to the coastguard revealed that the forecast had been changed and force five was expected for “a time”, so we headed off to St. Abbs Head instead, where conditions were quite rough in the bay, but somewhat less fraught beyond the first headland. Given foreknowledge of the conditions, I would definitely not have chosen to bring the Cormorant, but by now I was committed, so, with a small amount of ballast in an otherwise empty boat, I braved the chop and survived, though the amount of bracing I was doing at times kept my forward paddling pace a lot lower than acceptable. Once into somewhat calmer conditions round the head, I got better, though these were definitely seas I couldn’t have handled in the boat back in April. I’m definitely growing into this boat… What’s needed now is some rough sea with a very easy escape route, to reduce the psychological pressure – I don’t paddle at my best when feeling that I can’t afford to capsize and fail to roll. If I was relaxed enough to let the secondary stability deal with the waves, I’m sure this boat would perform extremely well.

At Anglesey over August bank Holiday, seas were pretty calm on the west side (and when it was choppy at Puffin Island, it was Mary’s turn to go out whilst I pootled round Porth Dafarch and Trearddur Bay). This was good for rock-hopping and playing with kids and beginners. The best bit of this was another fine photo by Sue Sharman:

Over the years, the Cormorant has been mostly used for daytrips, many on the late May bank holiday week in Mull, but it also turns out that I’ve paddled the Farnes more times in this boat than in any other. One of the main reasons for not using the Cormorant more often is that on many trips now, we are the more experienced paddlers, and the possibility of needing to rescue another boat has tended to favour being in the Mistral – not only is this a little more stable, but I have less qualms about scratching the deck emptying another boat. 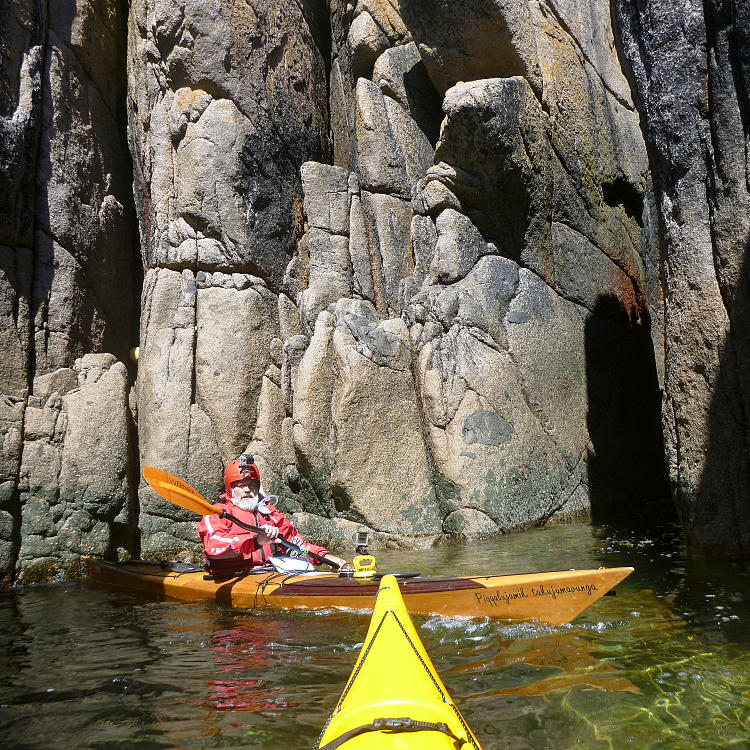