A slightly less effortsome method of fabrication became available for my second boat with the discovery that I could buy 5 cm diameter wooden balls with a hole through the centre from the Art Shop in Darlington. This is the method I will describe, which starts by feeding these balls into the bandsaw to cut them into two hemispheres. The centre of each hemisphere is then hollowed out, initially with a router, finishing with a high-speed cutter in a Minicraft drill, then with abrasives. The result is coated with epoxy. Small diameter anodised aluminium rod is now bent into a series of curves and corners to fit inside the groove. The photos show the final bend in the vice (all done by eye and not measured – no doubt a jig could be devised), and the bar in position on a ball. The right angle bends outside the ball leave sections of the rod which will lie flat against the inside of the deck, resisting any tendency of the rod to be rotated, which could lead to a failure of the epoxy and leakage of water. For deck fittings used to hold 20mm tape for hatch hold-downs, the rod remains straight across the hollow in the hemisphere, but the bulge up is definitely an improvement for those fittings holding deck lines (not so much of an issue for the straight bars used for retaining straps on haches on Geyrfugl). 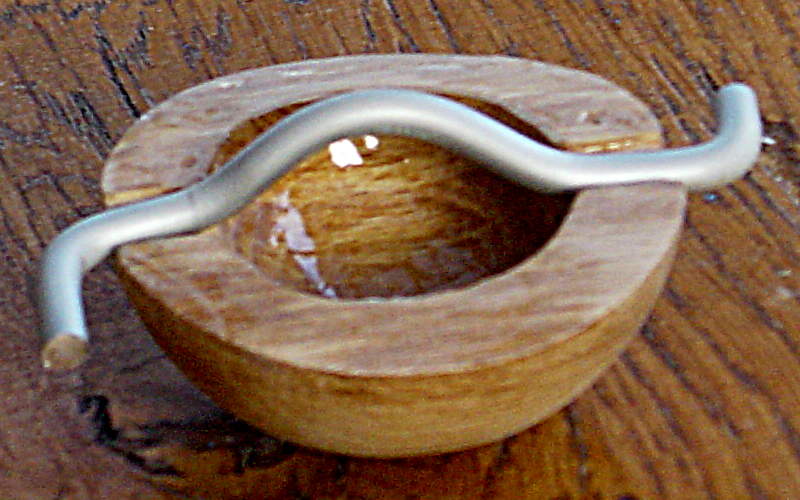 Holes are now drilled in the deck. I did these well undersized and then reamed out the holes with a small sanding drum, to get the position exactly right and to avoid tearing off glass from the surface when drilling. The holes are a little wider on the outside surface. 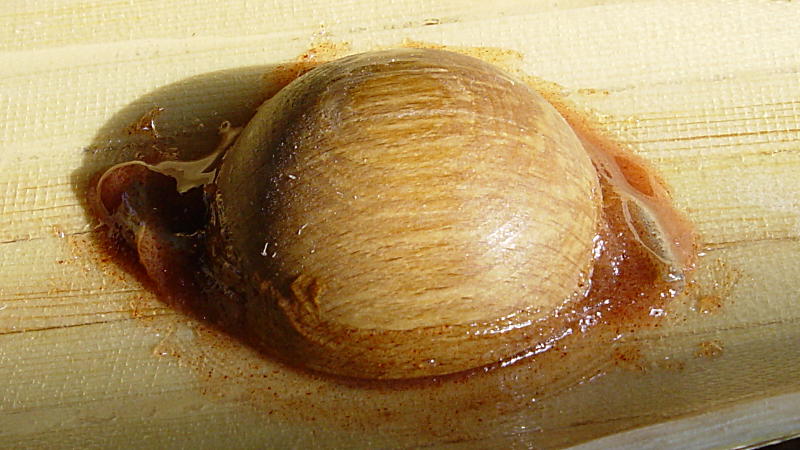 A needle file cuts small grooves on the edges of the hole inside the deck, which helps the rod lie closer to the inner surface and thus stand a little higher on the outside, and helps hold it in position when gluing. The left photo shows a rod in position inside the deck (this hole happens to have intersected one of the thin ash laminations on the inside of the deck acting as a minimalist deck beam – bad planning). The wooden hemisphere is filed/sanded to fit the curve of the deck and ensure it will be a snug fit over the aluminium rod. The photo right shows the fitting glued in place using epoxy thickened with (in this case) silica and Padauk sawdust. I haven’t found it necessary to glass over these fittings. 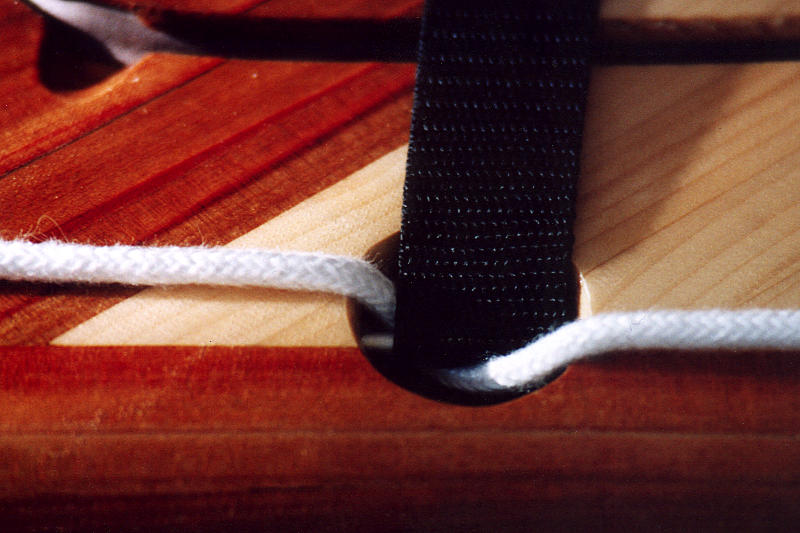 The fittings on Geyrfugl are of two types. 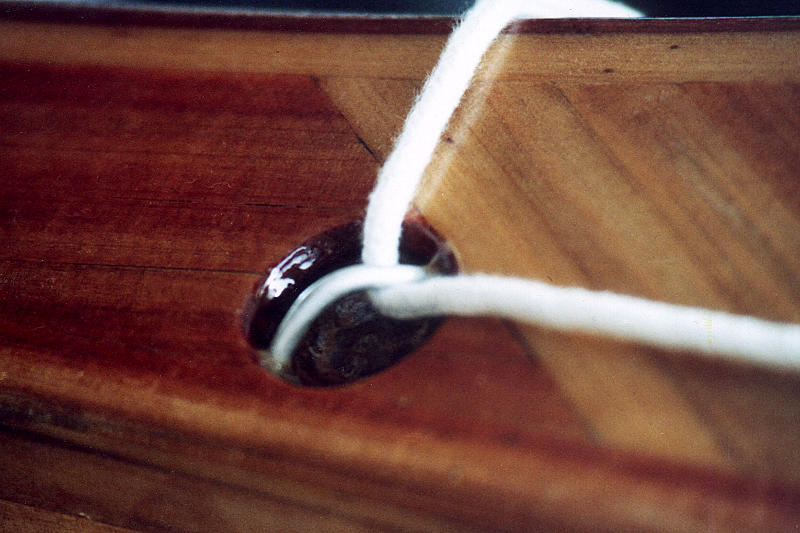 The 20mm tape straps for the hatch covers fit onto straight anodised aluminium rod in recesses either side, whilst the deck elastics and deck lines have fittings in similar recesses, but with the aluminium rod bent to stick up somewhat above the deck, giving more room to thread the cords. All the fittings on the Cormorant are of the latter variety. There are nineteen fittings on Geyrfugl, which was actually a considerable amount of work, but they do look good and won’t catch on clothing. Very little cleaning up of squeezed out epoxy was needed, though one or two small voids had to be filled later with thickened epoxy. The hardwood used on Geyrfugl was Olive – perhaps a bit heavy, but this was what was to hand, and a dark colour seems to work well. The Art Shop balls are a light coloured hardwood, which fitted well with the pine parts of the Cormorant deck, and didn’t look bad with the Cedar or Purpleheart, either.