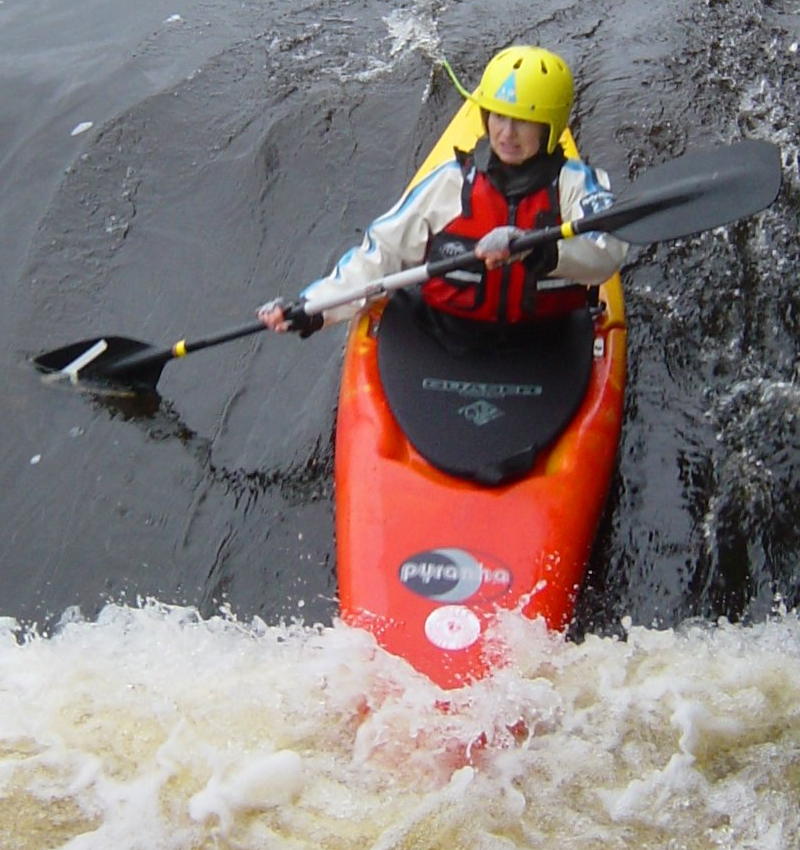 Andrew’s birthday canoeing week was cancelled owing to lack of participants so the day after Michael’s party sleepover I was sent off down the Tees in Andrew’s kayak. “You’ll be all right” they said (without conviction), and I was. 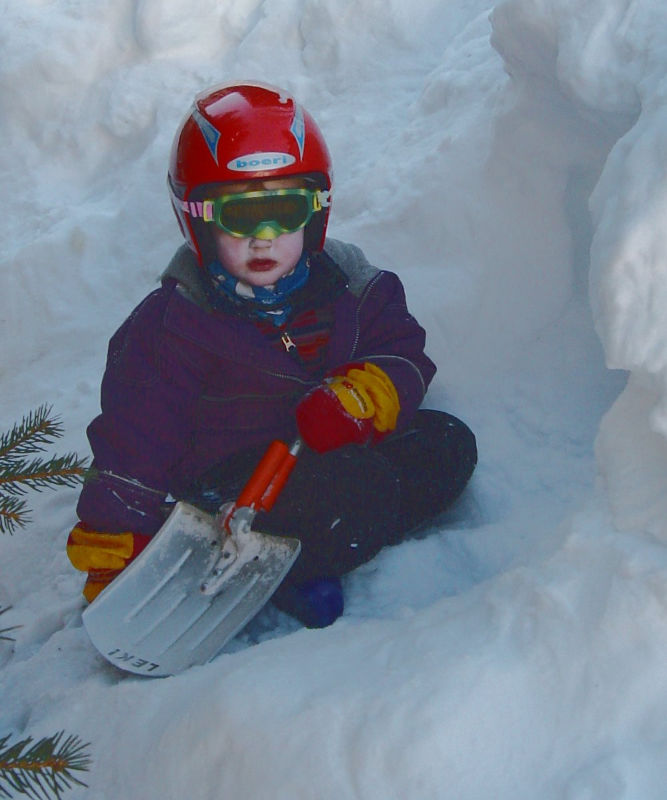 Andrew got some nice photos.

We all went skiing in February half term. It was a little disappointing to discover that the children preferred building snow houses with multiple toilets to skiing but there’s no accounting for taste.

Andrew took himself off sea kayaking over Easter in his home made wooden boat. Apart from a swim in the Clyde he was accosted by Duncan Winning O.B.E. (for services to kayaking) who asked him about his boat and then handed him his business card. Andy then had to make himself a business card with a picture of his kayak on it (and a URL) that he hands out to anyone foolish enough to ask him about it.

This was followed by a further sea-kayaking trip originally billed as the Treshnish but subsequently downgraded to Loch Sunart. The weather was truly awful although it did stop raining briefly. On the other hand we did see porpoises and several otters. In fact we were treated to a close up view of two otters fishing in a small bay, something I won’t forget in a hurry.

Andy and I then had yet another sea-kayaking trip to Mull, again the weather wasn’t brilliant and again we failed to get to the Treshnish. We did get round Iona where we were accompanied by a pair of dolphins and we did camp on Insh Kenneth so I got to see the wonderful medieval carved grave stones. The children stayed with Auntie Cath and Auntie Christine and acquired the wonky donkey plus a large collection of spent cartridge cases and painted stones. 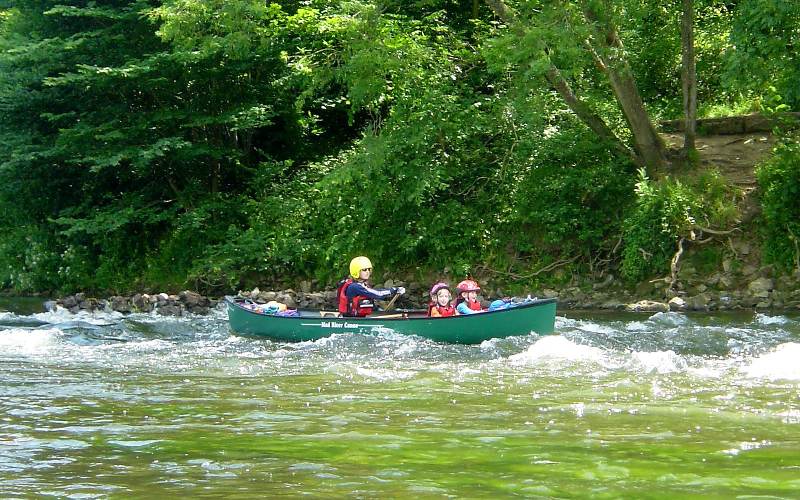 Then followed two weekends in Wales; one to Symonds Yat where both Michael and Sarah ran their first rapid although Michael did do it backwards. The next was to South Wales for caving. It was gloriously hot; the campsite had a brilliant climbing tree and den for the children and someone left their knickers in Steven’s car, which got him into bother. The caves were pretty good too. Ireland was again our summer holiday destination. This time we spent a week in Dingle where Sarah got to see Fungie the dolphin. Andrew got invited to go sea kayaking with a guy from the campsite. By all accounts the waves were rather bigger than they anticipated so once they got out of the harbour they had to go way out beyond the reflecting waves to turn round – then came back gibbering. It made a good tale at the campsite annual barbeque to which we were all invited.

We then went back to the Burren. It was red hot, I got lots of climbing done, we had one caving trip when I managed to blow up my new carbide lamp and we spent lots of time on the beach. 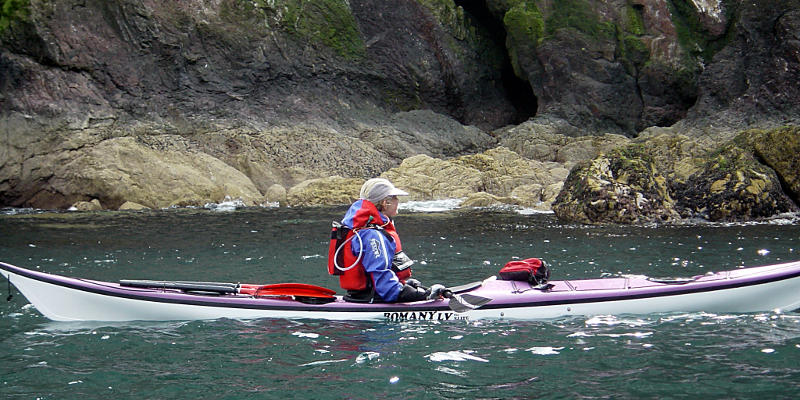 Our trip to the Farnes got downgraded to a bimble round St. Abbs Head when the weather rather exceeded the early inshore forecast with some exciting wind and big waves (Andy wished he’d taken the more stable fibreglass kayak). Over August bank holiday we all went to Anglesey where I finally managed to do the trip round the Stacks on Holyhead Island. It was idyllic; the sea was calm, the sun was shining and the views were amazing. The following day we went out to Puffin Island and it was back to the usual winds, waves and strong tides.

In September, Andy went to Spain caving for a week (as an excuse to buy a huge block of Queso Cabrales which is managing to make the freezer stink, even at -18°C!) He managed to paddle down twenty miles of the Dordogne in his sea kayak on the way home, though the return bike trip to get the car proved a little epic as it got dark.

Soon after, Mary had several days climbing in the south of France, having left Andy with instructions to buy her a whitewater boat in time for the first easy trips of the autumn. However, she isn’t taking rivers seriously and still hasn’t swum.

The school took Sarah to an outdoor centre in October. I think she mostly enjoyed it although she did complain that she spent a lot of time changing her shoes.

Over half term we went to London with Auntie Joy. She taught Michael that you step out into the road waving your hands wildly in order to attract a taxi and thus avoid having to walk. We did a variety of museums and galleries then we went to Hamleys where Sarah discovered the Bear Factory. For the uninitiated, this is a place where you collect your carcass, take it to the stuffing machine then kiss a red satin heart, insert it into the stuffed carcass and it gets sewn up and given a birth certificate. You then have to select a full wardrobe for it to wear. We had to do it all again the next day when Michael decided he wanted one too.

Andy went to North Wales where he discovered that when it rains heavily all night, the rivers get exceedingly big, but a week later on the Tees it was all frozen back to bump and scrape. This is perhaps the first winter where we have both been hoping for a miserable downpour every weekend (except when Mary wants to go caving :).

We are now in the process of preparing for Christmas; both Sarah and Michael have speaking parts in their Nativity plays so we are enduring the trauma of learning the lines. They both helped make mince pies last weekend and I even got them to do some art work.