We started with last Christmas in Uganda, kayaking on the Nile in the sunshine. It was wonderful. We ran all the bits we did last time plus a few extra ones, some even more scary than last time. 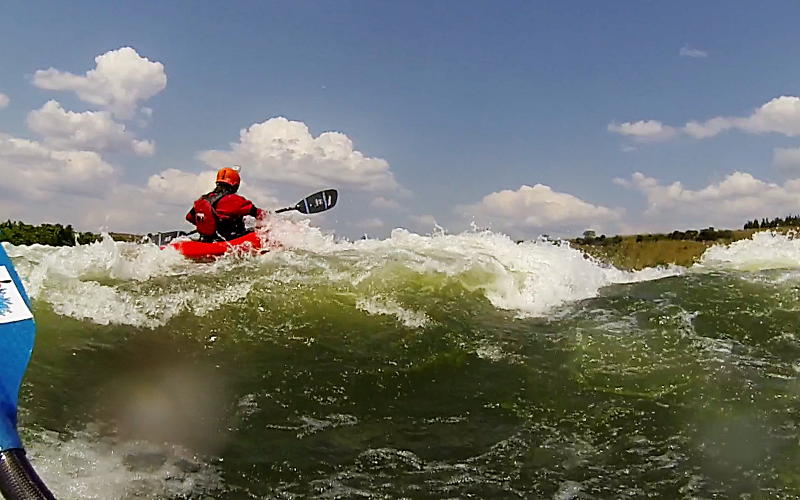 Next up was skiing at Easter, but first the saga of the ski boots sold by Ryan. Sarah wanted her boots fitted. She tried on every pair in the shop in her size, had them individually adjusted, then decided the hours of fitting and adjustment hadn’t produced the desired outcome so made Ryan put them back to how they first were. Ryan had the patience of a Saint. I lost the will to live and went home. Anyway, Sarah and Ryan got talking kayaking. It turned out Ryan is a boater but was stuck in Leeds with no one to paddle with, so Sarah took him boating, and he split his boat! Then we took him walking and Sarah and I watched him fall all the way down a gully below Sharp Edge. Now he’s run away from us to China! 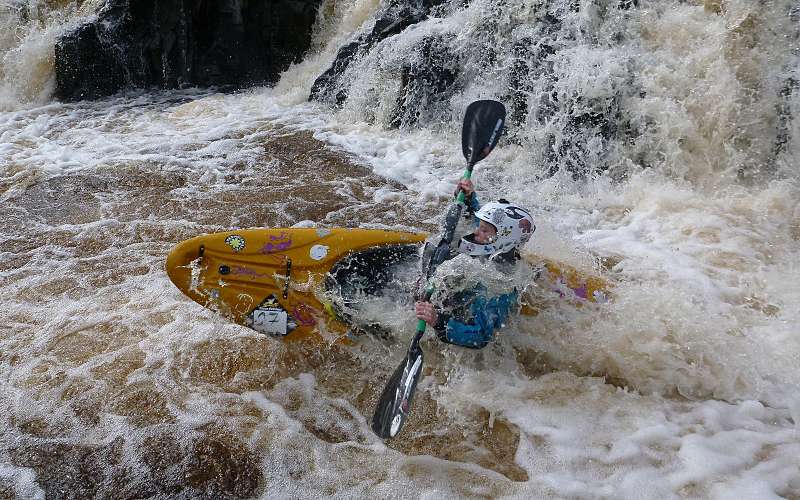 Back to skiing: friends Bill and Niki Norman joined us in Sölden. Despite being end-of-season, we got lucky with fresh powder. Mary managed to take Niki down a black run instead of a blue; sorry! Sarah and Andy were having various problems, so Mike and Mary left them to it and had an amazing day skiing couloirs. Soon we’re off to Mayrhofen for New Year – the only week the kids can realistically escape exam revision.

With Leeds University Canoe Club, Sarah went to the National Student Rodeo (a kayak and drinking event at Holme Pierrepont white water course). Shortly afterward, she became one (of two) of LUCC’s Competitions Secretaries who will be organising the 2015 event for up to 1000 students. Andy seems to be doing most of the website for her at
nationalstudentrodeo.org.uk

The following weekend was the first ever Upper Tees Creek Race – a time trial down the grade 4, seeding for boater-cross on a shorter section, both running Low Force at the end. Mike got the fastest time of the three of us, Andy was the only one that got a second boater-X heat, but Sarah was the one that got actual prizes !

Then Mary retired and the holidays just keep coming! At the start of May, Andy and Mary went to the Anglesey Sea Symposium where fun was had in spring tides – definitely a date for next year. 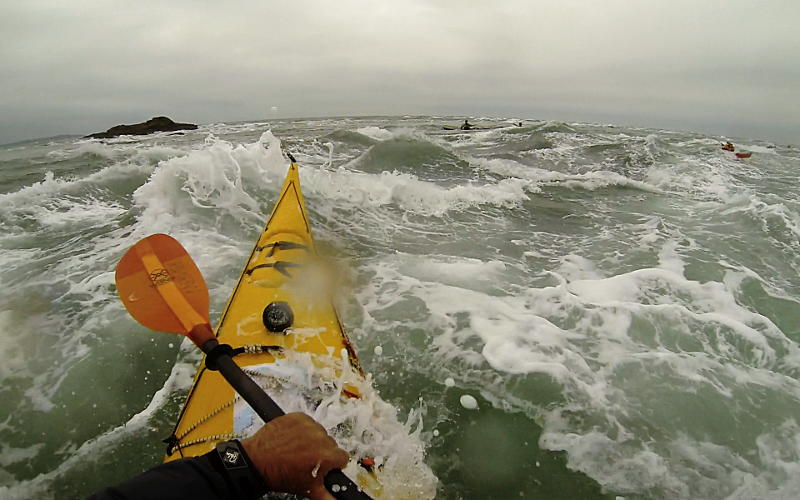 Andy, Sarah, Fern and Mary went to Mull where we did some walking, sea kayaking, and geologising. Sarah found an ammonite on the beach, Mary found a much smaller one. Andy spent hours and hours searching but didn’t. We came home with a car full of rocks! Mike stayed at home, ostensibly to do some revision, but there were an awful lot of take-away remains suggesting there had been some sort of a party. Sarah and Mary went to Northumberland on a sea kayaking course. Our coach had to cry off with a knee injury after a couple of days so we explored the coast on foot and came back with another car full of rocks. (We resumed in August with trips to the Farne Islands and round St. Abbs). Andy and Mary went on the club trip to “not St. Kilda” kayaking from the MV Cuma. Five days around the west coast of Lewis and Harris in fairly rough conditions with amazing beaches, coves and caves but no St. Kilda as the wind persistently blew from the Southeast right into the only anchorage. Maybe next time. 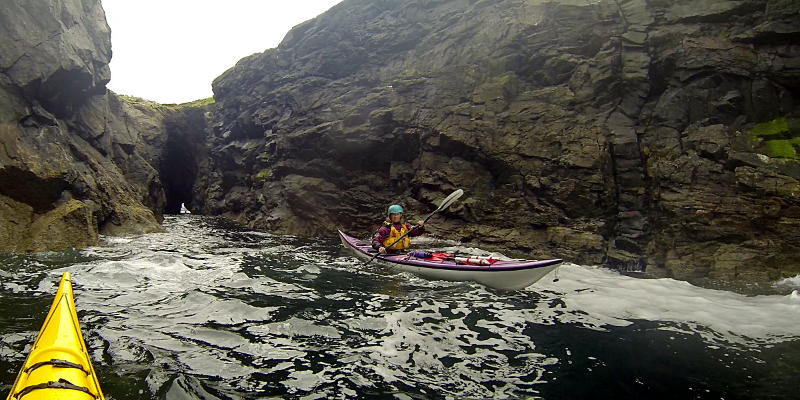 We had a three day turnaround before we set off for almost a month in the Alps: France first, then Austria. Turns out whilst everyone here was having a warm dry summer all the rain was further south. This meant that we got to run some rivers that previously were too low but Mary also got completely creamed on some bits she’d previously survived. One night the Inn reached a ten year high, was full of enormous tree trunks and threatened to flood the campsite. Walking was higher on the agenda than usual… Mary had a week in the Pyrenees with friends Kath and Ursula doing girlie walking and climbing. A week earlier, following a momentary lapse of attention whilst trying to open her rusty leatherman Mary managed to slice her thumb most convincingly, so no climbing. In October, Mike, Andy and Mary (with Lowri) went to Scotland, but overnight it rained four inches:- a landslip blocked the Fort William road and the rivers were massive. Mary got creamed yet again and added another selection of scratches to her helmet. Andy added three videos to his portfolio. 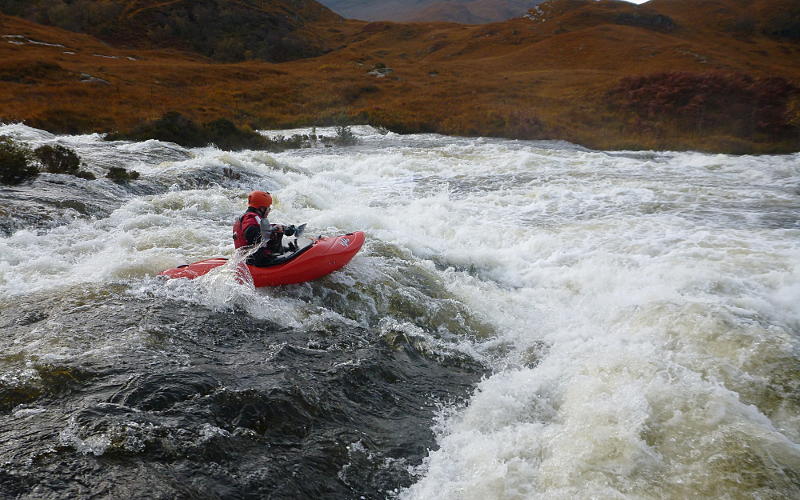 Sarah was one of twenty two paddlers who made it to selection weekend (involving serious paddling in N.Wales) for the British Universities Kayaking Expedition. Her research was for a trip to Iran, but eventually she decided that she was perhaps over-committed with a six-week geological mapping project next summer and so didn’t go into the final selection for what turns out to be a six-man expedition to Madagascar.

Mike is applying for Uni.:- so far 3 offers from the 3 places he doesn’t actually want to go (Exeter “has the best course, but the worst kayak club”), but fingers crossed he does get an offer from one of the others. Like Sarah, he, too, is planning a gap year, at which point Andy and Mary can have even more holidays! So this year’s message; retire and go on holiday:- it’s great!