I have an extremely long and detailed log book account of this trip which really does seem a bit more than I’d expect anyone to wade through, so there follows a much-abridged account.

First job was to rig County Pot, where we found an ULSA party going down ahead of us, including the legendary Dave Brook. As they offered to leave our tackle at the head of the second pitch for us (and there was tackle which would be rigged until tomorrow anyway), we gratefully accepted and scurried back to Lancaster in the teeth of a remarkably vicious hail shower.

We were descending this on ladders, so everyone got a lifeline down, leaving me as last man to abseil. We met an NPC party coming down from Cow Pot via an impressive freehanging rope into Fall Pot, then had a look downstream to the sump as well as up various side passages. Upstream of Fall Pot, apart from a boulder blockage below Stake Pot, is all superb romping streamway until a final boulder collapse where Martin led up via the fixed rope whilst I found the way under the boulders and out to an easy climb up the far side. Both groups reunited in Collapsed Boulder Cavern (my route proving somewhat quicker in the low prevailing water level) and on we went to join the high level route to Oakes Cavern. I rushed ahead to photograph the Minarets, then on through Cornes Cavern. 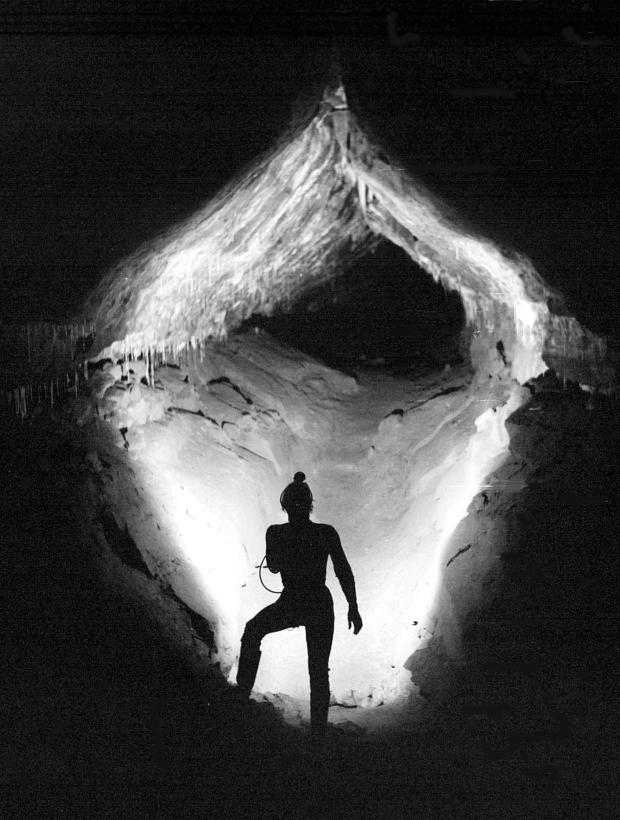 The boulder-hopping beyond is strenuous and care is needed as the mud can get slippery. We passed through Snail Cavern and Monster Cavern, to reach Main Line Terminus where a bit of thought soon saw us finding the right way to Stop Pot (which had a fixed ladder – one of many obtained from scrapped railway signal boxes in the fifties).

We detoured to find Gypsum Cavern, but instead almost found the way to Easter Grotto, having failed to recognise Holbeck Junction. The final obscure climb up eluded us, and on our return, we spotted Holbeck and briefly visited Gypsum cavern as originally intended. By now we’d been underground quite a while and so we headed on towards Eureka Junction. It was apparent that there was now more water in the streamway, suggesting rain on the surface, though not a significant increase. From Eureka Junction, the passages of County Pot were fairly familiar, so we made good time out to the second pitch where we used the in situ ladder and removed our own which was coiled ready at the top. We almost missed the climb to Poetic Justice, but having spotted it, we soon got through to Spout Hall and off up towards Confusion Corner. The Showerbath was running freely, confirming wet surface conditions, but it is no distance to the first pitch and only a brief struggle up the thrutchy climbs to the entrance, where we found Easegill Beck flowing gently. Martin led a sub-group to derig Lancaster whilst the rest made their way more directly to Bull Pot Farm.

My log shows that we took a leisurely seven hours over this trip, mainly due to the amount of side-passage exploration and photography that we did, rather than to any navigational blunders or inefficiencies in progress.