We’d arranged to drive to South Wales pretty much the instant I could get out of my Physics practical exam in the Cavendish Lab (West Cambridge). This was the last exam any of us had this academic year and I finished ahead of the official end time, so we were speeding west by shortly after five, non-drivers already swigging celebratory canned beer in the back.

After fruitlessly searching for a campsite shortly before Abergavenny, we eventually arrived at Crickhowell at about ten. After the pub we moved onto a campsite which we left the next day since it was 50p a night (exorbitant in 1977). We were the only people at Whitewalls on the Friday morning after the van had graunched its way up the steepest hill of its life. Since no-one except Piete had been in Aggie before, and him ten years ago, we decided that a trip down to the main streamway to be sure of our navigation for the next day was in order.

We took the van as far along the track as possible for any vehicle and partially changed in the sun before walking to the entrance in swimming trunks and wellies. We opened the Ogof Gam entrance and changed in the draught. Piete and I were in claggies while the others were in wetsuits. We signed into the book and set off. Keeping left everywhere proved to be fairly simple and we soon arrived at an area of boulders which we assumed was the first boulder pile. Accordingly, we climbed over until we arrived at a much more massive collapse. Here we treated them as boulder choke one and this led to a confused group of cavers emerging from the far side to find the real boulder choke one. This was in fact more recognisable from the CRG description than I expected and I was able to find a route through the famous “advance only one yard” section to the streamway. The CRG route is not the same as at present from the streamway to Main Passage where we succeeded by following plentiful thrutch marks and polished boulders. We all emerged from the choke into Main Passage very hot, but pleased with our progress.

After a brief gonk, we strode off down the massive tunnel until we were able to hear running water down a hole in the floor. Nearby was a larger way down under the right wall with a ‘Keep Aggie Tidy’ sign above it. After a piccy of Main Passage, we descended this to a streamway. This led quickly to a junction with Meander Passage, but we continued downstream to discover what ‘bouldery’ really means.

Much hopping over boulders led us to an area of more significant collapse, through which we were fairly easily able to find a way, with only one error just before we reached the ‘second boulder choke – unstable’ sign. We cautiously followed the wire through this 50′ section and up into the large muddy tube of Keyhole Passage. Here there is a rescue dump and we had a gonk while we looked around. I took a photo and then we proceeded along, avoiding the deep trench in the floor, using a couple of fixed traverse wires until we arrived at a very muddy fixed rope down a hole in the boulders. I was last down this and various persons had different degrees of difficulty – I found the rope useless and the rock reasonable, Simon and John found they could get a good grip on the rope, but the rock was too greasy. Needless to say, we all got down by different techniques and soon regained the stream, no less boulder-strewn than before.

Fairly rapid progress led past some very large fallen blocks and a flowstone inlet to an enlargement at North West Junction, where the Turkey Series stream comes in from the right. We put up a small cairn here since the main streamway was the less obvious upstream way on, and we were unfamiliar with the place. Downstream was less bouldery, in that you could climb over most obstructions and rarely had to thrutch under or past them. The streamway continued tall, but not too wide, for a long way, but was certainly not the magnificent streamway I had expected to find.

After a while, the roof started to lower and ahead was a sight much like a sump, but, in fact, the roof dips lower and the water deepens, while the passage steps sideways and the roof rises again, though over quite a deep canal. We knew that we could not be far from the third choke, so those in wetsuits went ahead while Piete and I waited for them.

The others all reached BC3 and Doug and Mike went through to BC4, passing an unexpected intermediate boulder pile which they reported to be very loose on the way. Simon and John remained behind at BC3 when they saw the old guide wire disappearing into impenetrable boulders.

After what seemed a long wait, they returned and we set off back upstream pausing only for a Mars bar and a piccy, and to empty gravel out of wellies. 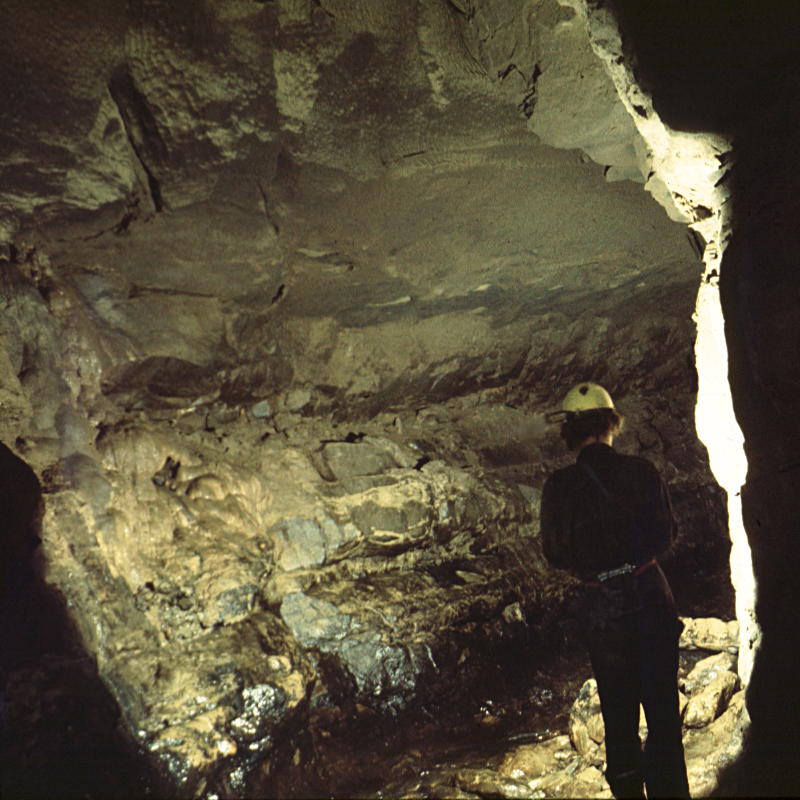 The journey up to NW Junction seemed shorter than on the way in, but luckily the cairn stopped us from missing it. The first section of the Main Stream upstream of here seemed to be uncomfortably low after the larger combined streamway, but the passage is higher further up, and we were soon scrambling over yet more boulders.

We soon came to a section where the boulders were threatening to force us to crawl in the stream when someone thought to look up and saw the rope hanging down. We climbed up the boulders and then up the hole, where the handlines were again of varying amounts of use to various people. The two ammo cans were passed carefully up and we were soon making easy progress along the floor of Keyhole Passage. We had another brief rest at the food dump before starting down into the second choke, again being fairly careful. I was ahead in the section after the ‘unstable’ bit and managed to miss the crushed ammo can which Simon and John spotted in the supposedly stable section.

Once back into the streamway, progress was faster, though still hampered by millions of boulders all over the place. There is no navigation to worry about here as the only junction I actually saw was the one with Meander Passage and this is immediately before the way back up to Main Passage. We emerged from here feeling quite pleased with our navigation and set off for BC1. We failed to find the mud ‘statue’ of GNH in Main Passage and almost failed to find the way back into the first choke. Once Simon and Piete had located the way down, however, we made good progress back down to the stream and then back into the boulders. I was almost last and was the first to spot the error when the leaders had failed to ‘advance only one yard’ and were heading for the tributary stream. I went up the hole and quickly out of the choke after calling the others back, and from here navigation was easy, just a case of keeping right all the way. This first taste of the entrance series made it seem fairly tiring, hopping over large boulders and traversing, but we were to know it better later.

We signed out after a reasonable 5½ hour trip in which navigation proved to be far less of a problem than expected, and felt confident that we could find our way round the Grand Circle tomorrow. We spent the rest of the afternoon sunbathing on the edge of the escarpment before returning to move to a cheaper campsite.