A long weekend trip to Belgium, via the Felixstowe Zeebrugge ferry, and staying at the Centre YMCA de Réchereche et Exlorations Spéléologique, a remarkably well-equipped caving hut. The club here has close connections with the management of the Han sur Lesse show cave, so we had managed to arrange a caving trip into the Père Nöel cave which lies behind this large resurgence (rather than the standard showcave trip which is all rather tame and involves a large boat load of oohing and aahing tourists). We were supposed to be underground by 9 am, but in practice this meant leaving the cottage at 9:30 to drive up to the Nature Reserve behind the Han sur Lesse show cave. Through the rather serious chain link and barbed wire fence, we soon reached the entrance in the wall of a large rift in the ground. The cave is mainly easy boulder-hopping, but the formations are very impressive. Nearly all are pure white and some are very large indeed.

From the entrance, we descended steeply through a couple of digs and some small steep chambers on the dip, finally to emerge into a large sloping bouldery chamber, La Salle Bivouac, where the first of the good formations appeared. As we moved across the chamber, a large mass of curtains became visible hanging from the slanting roof on our left, and large stalagmite bosses towered over the boulders on the right. We were already impressed, but much bigger formations were soon to be seen as we arrived in La Salle Blanche. From the top of the boulder slope in this chamber, we looked across many large white stalagmite bosses and other massive formations which I couldn’t photograph owing to inadequate flash power. We left Salle Blanche by passing under a huge calcite bridge formed by the collapse of boulders from under a large stalagmite flow and topped by a colossal multi-tiered boss looming up into the roof somewhere. 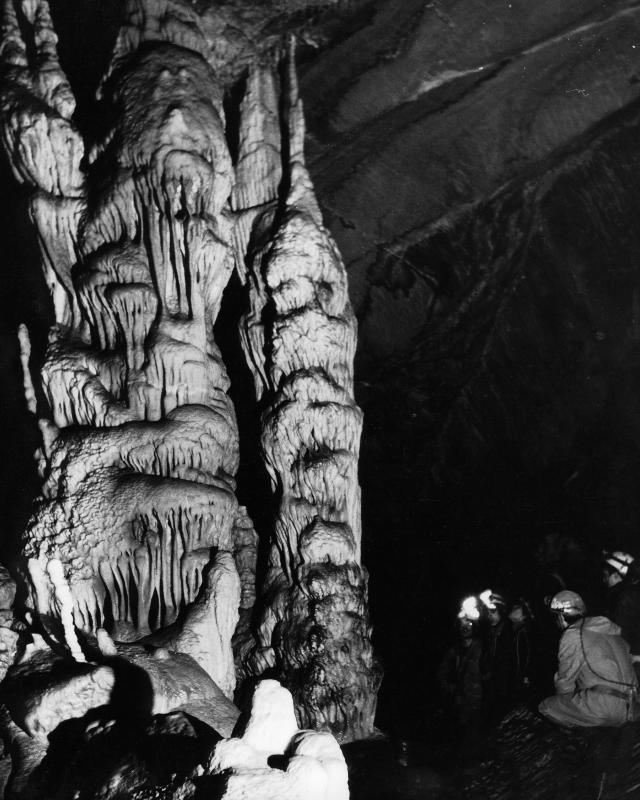 A short section of muddy walking followed, then a short thrutch up into another large chamber with formations. Scrambling over boulders brought us to the top of a mudbank in Salle du Cobra, named after a remarkable stalagmite which was tall and thin but with a wide flattish top like a Cobra’s head. From here we scrambled down and up to a small passage up on the left, which turned out to be a bedding with rows of formations aligned along joints in the roof. This soon led out onto the Balcony, a spatially interesting ledge up to 20m above the floor of the chamber, La Salle du Balcon, with the usual huge towering stalagmites in it. This chamber, and the ledge, ended at a large stalagmite barrier over which we climbed to reach further chambers and lesser passages, eventually descending to a muddy place which was supposed to be a siphon but looked more like a silt choke. 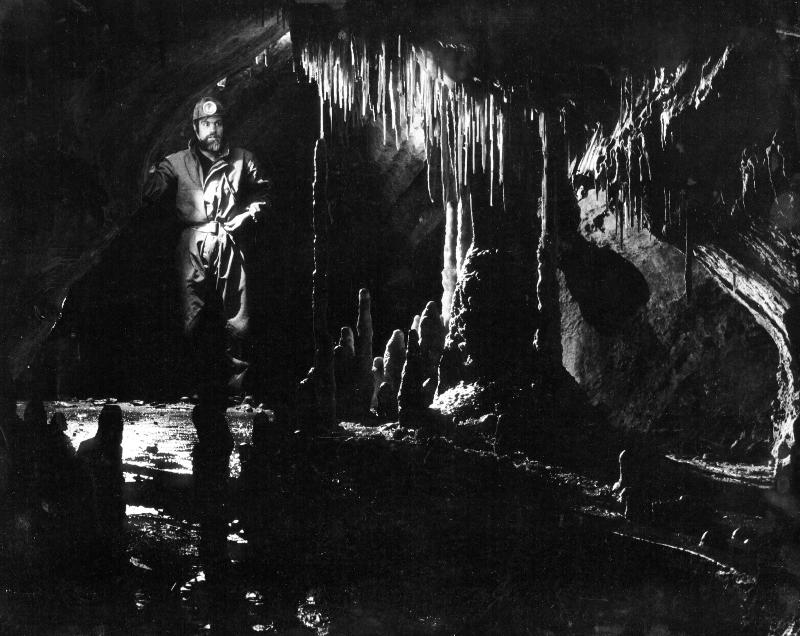 On the way back we had various stops for photographs, unhurried by the very patient Belgian cavers. We also investigated a small side grotto with some very good “streaky bacon” curtains not far from the entrance. Time Underground: three hours.