This was my second year visiting the Black Cullin of Skye – a traditional destintation for the Northern Pennine Club every Whit Holiday week. The Cullin are the most inaccessible of Britain’s mountains, though only the Innaccessible Pinnacle requires actual rock climbing to reach. I remember meeting a big group from some private school, who were visiting the Cullin to prepare them for the exposure they would experience on a visit to the alps in the summer. Having had several alpine seasons myself since this trip, I can honestly say that very little in the easier grades in the alps prepares one for the exposure to be had in Skye !

Having warmed up on the Pinnacle ridge of Sgurr nan Gillean on the first day, we set off from the Sligachan Hotel with bivouac gear for a two day traverse of the main Skye Ridge. A vast amount of time can be wasted trying to find key passages on this ridge, and we had the advantage of a couple of people who had done it before and knew not only the mian route, but various “skulker’s routes” which could be used to bypass some of the more technical or time-consuming obstacles. It’s quite a long walk in just to reach the start of the difficulties, but the first col gace a splendid view of Loch Coruisk and the jagged ridge we would aim to complete on the next day. 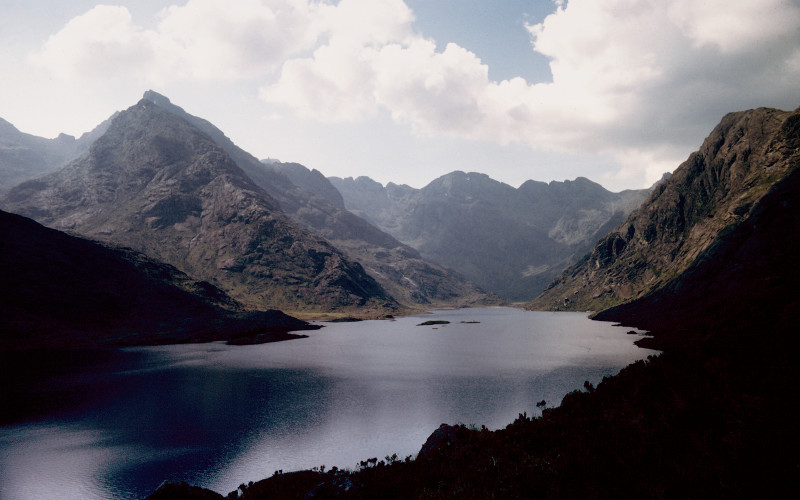 Dropping down, we crossed the outflow of Loch Coruisk and wandered up the shore to the foot of the Dubh Slabs, where we stopped for a picnic lunch before starting the ascent. The shores of Loch Coruisk are hemmed in with high and very rocky peaks wit about half the main ridge visible from our resting spot. Lunch over, we shouldered packs and started up the slabs. Although technically a rock climb, and looking intimidatingly steep, the grade of “Moderate” implies no more than a scramble, and the incredible frictin of the coarse-grained Gabbro meant that we had no need of ropes on the ascent, despite being in big boots and carrying packs. It’s still long way up, as the route starts not far above sea level and ascends to the summit of Sgurr Dubh na da Bheinn, a peak just off the main ridge. 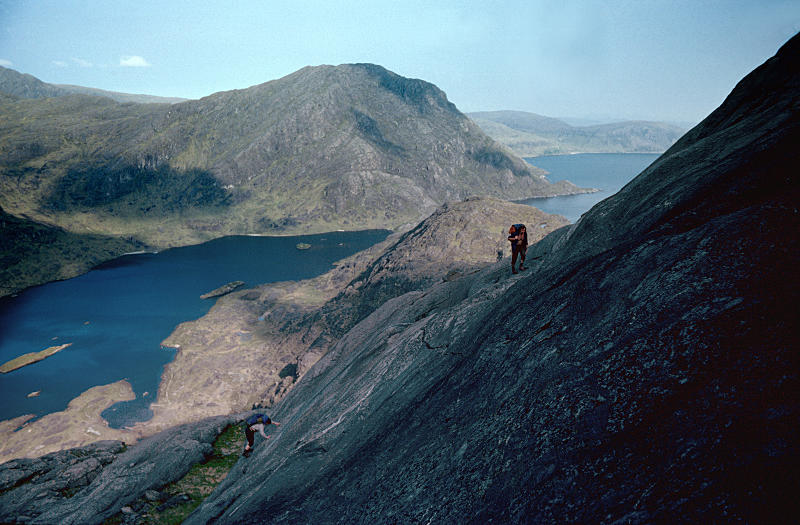 Upper part of the Dubh Slabs, Coruisk, Sgurr na Stri and the sea

As the rock was dry we made good time up the slabs, but from the top there is a gap separating the route form the main ridge and although it is possible to downclimb this, it’s a lot quicker just to abseil, since we did have rope with us, needed for harder parts of the route ahead. 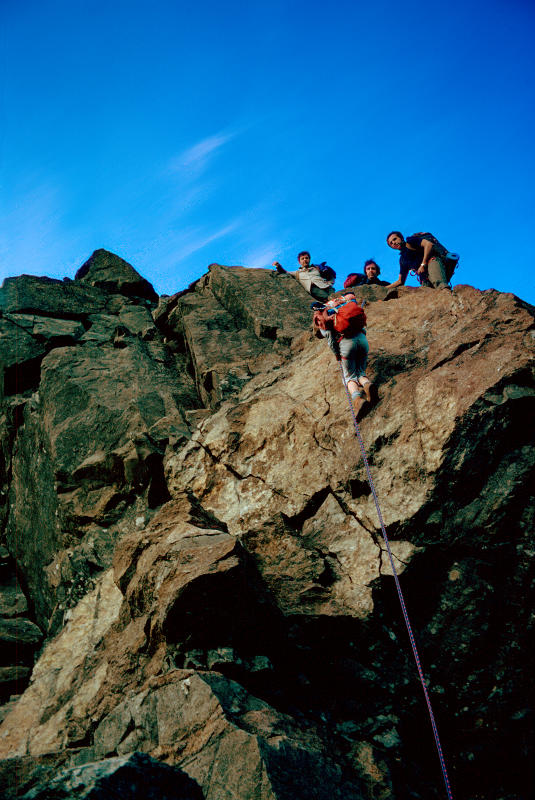 Once on the main ridge, the most significant obstacle is the “Dubh Gap”, a very polished chimney climb up trap basalt (a much finer-grained rock than the gabbro). This tends to become a bottleneck as parties queue to get started along the ridge, so our plan was to get along the ridge and bivouac as close as possible to the gap, so as to be among the first on the rock in the morning. Since this is also a popular strategy, there are lots of little low-walled shelters in this area, and we soon found a group of such bivouac spots with enough space for the group. 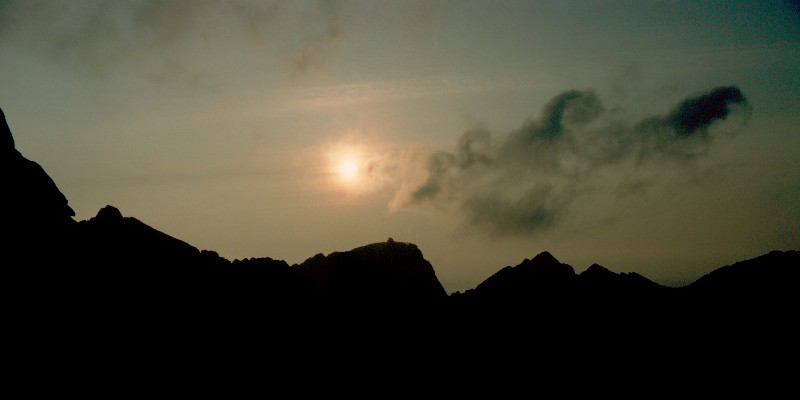 Fading light over the ridge, with Innaccessible Pinnacle below sun

I think we ended up being the second grup at the Dubh gap next day, and it soon became apparent why it was such a bottleneck as we took some time to get the first man up. Once a top rope was established, the rest of the party followed in good order and we were soon on our way. Just as well as the weather started to deteriorate, and route-finding was a little harder later in the day as the mist closed in. Once past the climb, we moved along and took Collie’s Ledge, rahter than King’s Chimney, and it was only some years later when I had started to take Munroing seriously that I realised that we had entirely bypassed the summit of Sgurr Mhic Coinnich. The immediate objective was to climb the airy An Stac and then the Innaccessibe Pinnacle. We did rope up for the latter, though it’s a bit of a token effort as runners are hardly plentiful nad again, it is just a scrmabe, albeit a lot more polished than the Dubh Slabs, and spectacularly more exposed. We were early enough to avoid being held up on the ascent, though there was already a bit of a queue for the abseil back down the steep end. 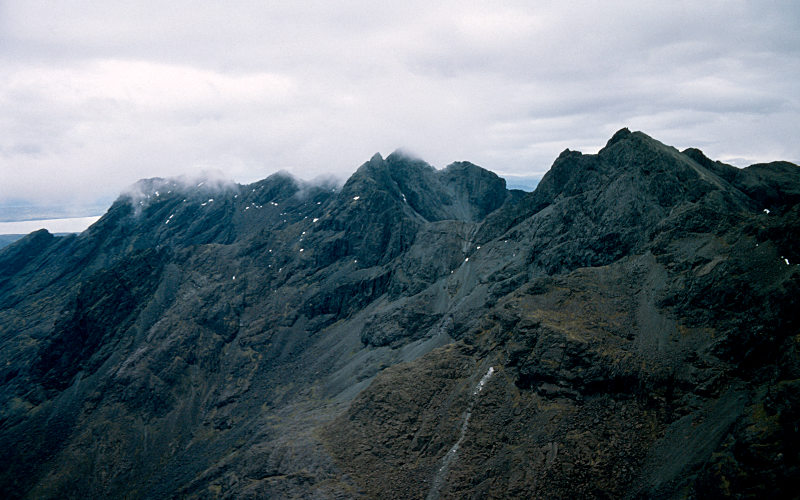 View back south along ridge

We now made good time along the ridge as those who knew the way were able to steer us past difficulties and onto the optimum route which was often far from obvious. One or two points had enough technicality to slow us down, though I don’t recall needing the ropes again. Once on the summit of Bruach na Frithe, we were on terrain we’d already visited two days earlier on our Gillean traverse. Bruach is also the point, late in the second day, when the Sligachan Hotel becomes visible, and the voices of mainy pints crying “drink me ! drink me !” became audible to the group. I don’t think we had seriously entertained the idea of going all the way to Gillean anyway, and from the top of Bruach we made a very rapid descent to the fleshpots below.