Having walked down Bright Angel to Plateau Point and back, I was now able to get a backcountry permit for a four night walk into the Inner Canyon. The number of such permits is limited by the very small number of established camping locations, with only a small number of occupants allowed each night. The desert environment is very fragile, with cryptogamic soils taking many years to recover from disturbance, so I considered myself lucky to get a multiday permit at such short notice on a holiday weekend, even if it wasn’t for quite the route I’d hoped.

The first difficulty was to get along the West Rim drive, which had no public transport, so hitchhiking was the order of the day. I was given a lift by a very pleasant Vietnamese family who handily stopped at every overlook to take photographs, which gave me some limited but useful views down to the trail I would be using.

My target was the Hermit Trail, which meant starting along a dirt road at the end of the West Rim Drive, and soon dropping over the rim. The secondary trail then turns north and traverses for some way in the Supai Formation, where it disappears from time to time among rock slides. The Hermit trail traversing the Supai (which typically forms blocky red stepped terraces like this). One doesn’t have to be far off-route for the trail to become invisible. It’s where the two hikers are heading left-to-right about mid-height in the photograph and maybe a quarter of the way in from the left edge.

I had brought a small bottle of “Chlorox” bleach to purify water, which I used when I filled up at Fourmile spring. The trough into which this water seeps must have been healthy – there sure was a lot living in it ! Beyond this, there is a very steep zigzag descent to get down the massive Redwall limestone, known as Cathedral Stairs. Soon below this the trail becomes a lot more gentle as it reaches the Tonto Plateau and intersects the Tonto Trail, which I followed to the east. Looking from part way along the Supai terraces, the Hermit trail can be seen zigzagging below the SW face of Cope Butte below which it joins the Tonto trail. The very steep zigzags of Cathedral Stairs remain hidden behind the red buttress on the right. The Tonto trail, which looks pretty flat from the rim (where it can be glimpsed at all) actually undulates quite a bit, despite detouring upstream to cross each tributary draw. My designated camp was in Monument Creek, only a short distance away, but I had to follow the left bank above cliffs for some way before I could enter the creek and descend to find a camping spot. Down at the river, early evening

Having set up my tent, I still had time and energy enough to drop down for a look at Granite Rapids where the creek joins the Colorado, getting back up to the tent as the sunset coloured the cliffs of Pima point above As the shadows deepen in the Inner Canyon, the higher walls light up in the sunset – Pima Point

The next day, I once again walked and scrambled down Monument Creek to reach the river, apparently just too late to see a group of canoeists go past. I found a nice enclosed pool from which there was no risk of being washed out into the current, and took a cold bath before festering on the shore, watching passing rafts and the many swifts swooping over the river catching insects. 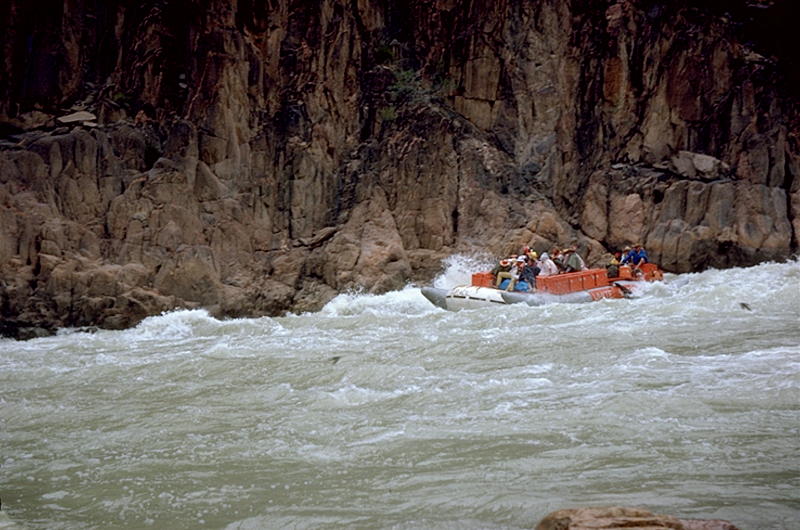 One of many passing rafts. The lack of oars/paddles seems strange, but not as strange as the fact that no-one seems to be wearing buoyancy aids or helmets ! The monument in Monument Creek

Friendly people on one of the passing rafts threw me an orange, which was very refreshing – but then I realised that I would now have to carry the skin for the rest of my walk and out to the rim. After a bit of exploring in side creeks, I returned to the Monument Creek camp for a second night. Last night I’d had it to myself, but now there was a second person here. Striking up a conversation as I lit my stove using my carbide light, he surmised that only cavers used carbide lamps, which I agreed was probably quite right. At this point, I noticed a name inside his hat, which he’d dropped on the ground – ‘Tony White’ – ah! I knew who he was – a fellow caver from ULSA, back in the UK. It turned out that he had been caving in a different area of Mexico from me, and had been exploring canyons there for a few weeks before coming back to the USA. I was to bump into him again in Yosemite, where he related a tale of woe about the Grand Canyon after we’d parted. He’d had his food raided, not by bears, but by ground squirrels. However, on his walk that day, he had arrived at his designated campsite before 9 a.m. and decided to walk out to the North Rim, buy more food, and hike back in, a trek which had not left him particularly tired. Given that the Backcountry office reckon the walk out to North Rim from Phantom Ranch is to be taken extremely seriously and only attempted by the fittest hikers, to have walked both out and back, from some considerable distance away from the river crossing suggested that he was very much at the peak of fitness. 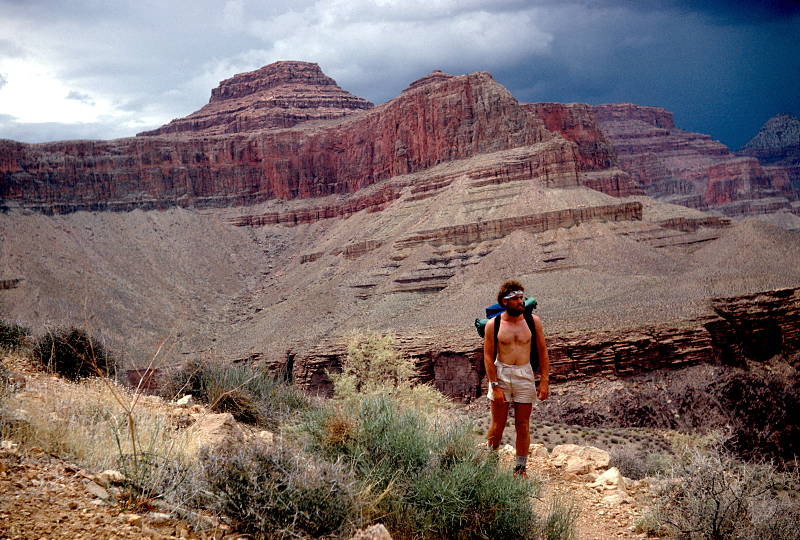 Trekking along the Tonto Plateau, with Tower of Set behind me Walking down into Salt Creek

Next morning I was not off early, as I had only a short distance to go, and I was kept entertained for nearly an hour by a Raven just on the rim of the creek. He was amazingly vocal. I’m sure he never repeated a phrase in all that time. My walk took me back up the creek then along the Tonto Trail to Salt Creek to another camp. The following day was also short, leading in similar fashion to Horn Creek. The header picture for my walking posts (last photo, above) was taken along this section of trail. Dana Butte, which was also a very obvious landmark seen from Plateau Point on my first day, was now very prominent. Dana Butte framed by a dried up Agave on Tonto Plateau

My final day would involve the reascent of Bright Angel trail – but this time with a heavy pack, so I determined to avoid the heat of the day. Accordingly, I was up and off very early, traversing along the Tonto Trail once again, until it met the Plateau Point Trail, about halfway between the overlook and Indian Garden. I turned right and ascended gently enough until the start of the zigzags. Looking down on the zigzag Bright Angel Trail climbing the Redwall Limestone and Supai formation.

I maintained my water intake and steady pace, filling up at both the resthouses which have piped water, and reached the rim by 9:30 in the morning, well before it got really hot, and only on the top section was the walk at all crowded. This meant I had plenty of time to return to the commercial campsite at Tusayan, just outside the park, and get organised to start my journey to Yosemite, initially by bus.

Looking at my huge 1:62500 map of the Grand Canyon National Park, I can see that I had explored only a tiny area, not far from the most popular access road, but had still met almost no-one except on the most populated Bright Angel Trail. There’s a huge amount of the canyon still to explore, much of it far more remote (especially from North Rim), and awaiting my return…. One of the first things I discovered when I arrived at the Grand Canyon South Rim at the start of Memorial Day weekend (pretty much equivalent to our late spring bank holiday) was that you could not get a wilderness permit for a multiday trip into the canyon unless you could convince them that you had some experience of desert walking. It’s a long climb out of the canyon, with very few places to get water, and they have a lot of trouble with people who underestimate the difficulty, so this is not entirely surprising. So my first task was to get the necessary experience on a day walk. It transpired that walking down to the Plateau Point viewpoint and back out in a day (with a light pack) would be entirely adequate to tick this particular box, so that’s what I set out to do.

No amount of seeing photographs and reading guidebooks will really prepare you for the moment you first walk to the rim of the canyon. From only a few paces away you can see very little, but the last few seconds of your approach open up a fantastic vista – at this point the canyon is well over a mile deep and the North Rim (down the Bright Angel, and up past Phantom Ranch and up the Transect) is 23 miles away on foot. The clear dry air, however, makes it look only a short distance across, which if anything exaggerates the depth, even though the Colorado River is not visible from South Rim village.

The trail immediately has to descend a break in the cliffs, which it does by a series of vicious zigzags. Many people turn back within a short distance as the heat starts to make the task ahead seem more daunting (even in May), so at least it gets less crowded within a fairly short distance. Because this is one of the two most popular trails, and is used by mules, there is plenty of ammonia-smelling debris to avoid, but your eyes are mostly on the scenery, which changes minute by minute as you descend. After many sets of switchbacks, a level known as the Tonto Plateau is reached, and the path levels out somewhat, heading past a green vegetated area known as Indian Garden, kept verdant by a spring, feeding a small stream which descends steeply down to the Inner Canyon. Indian garden nestles in a steep-sided draw, whilst the path to Plateau Point (visible on the left) keeps above its left bank.

For my walk, however, I had to keep left, above Indian garden, and up a slight rise to reach an overlook perched high above the cliffs of the Inner Canyon, and granting me my first view of the Colorado River far below. The overlook, like many such spots in American National parks, is protected by a fence and numerous warning signs, suggesting that perhaps the average American has not yet discovered gravity or can’t imagine the effects of a long fall… 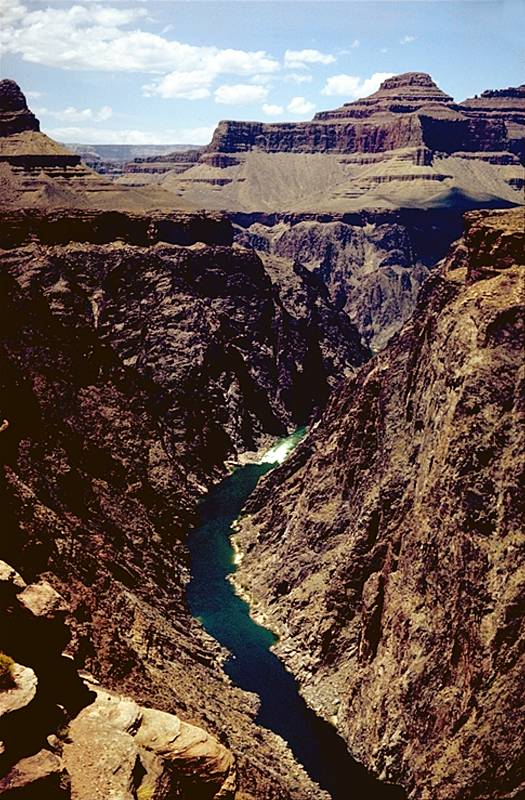 But not far away, the walker seeking solitude can at least get away from the worst of the crowds. Despite its name, the river is not red, as it used to be, but is now a deep blue-green, having had much of the silt settled out of it in the huge Glen Canyon dam, upstream.

Having not really intended to do a day walk, it was inevitable that it would now be later in the day than ideal for a climb out, so I set off at a steady and measured pace to retrace my footsteps back to the rim and to the Backcountry Office where I can now get a permit for something a bit more serious, although not the walk I had originally planned, as the Rangers’ estimates of how far one can walk in a day is rather less than mine.