Having acclimatised with a week at Saas Grund on my own, and a week at Arolla with various NPC/TSG (more blog posts will appear, but scanning dusty old slides is a bit time-consuming), Steve and I moved over to Chamonix to meet up with various other NPC folk who, having seen Mont Blanc from the top of the Midi the previous year, had decided they were going to climb it in 1983. Chamonix being quite a bit lower than Arolla, we immediately started to lose some of our acclimatisation, so were keen to get high as soon as possible, but the sight of spin drift blowing off the tops when we arrived deterred us for a while. However, on August 4th, Steve and I decided we had to go for it, so got the first stage of the Télépherique up to the Plan d’Aiguille and headed out across the glacier. This was a bit of a revelation – we’d not been anywhere remotely as crevassed as this before, so were glad we’d started early enough to reach the Grands Mulets hut with plenty of daylight. 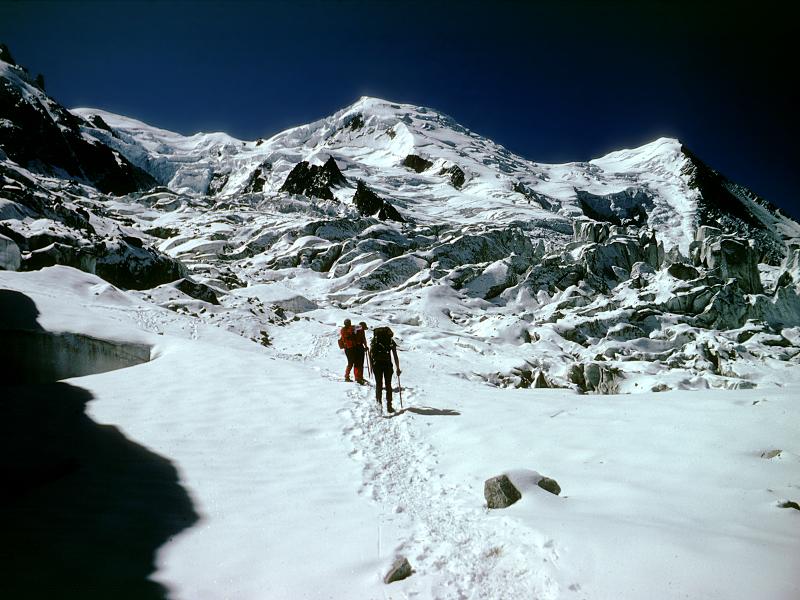 Heading up towards Grand Mulets approaching the heavily crevassed area 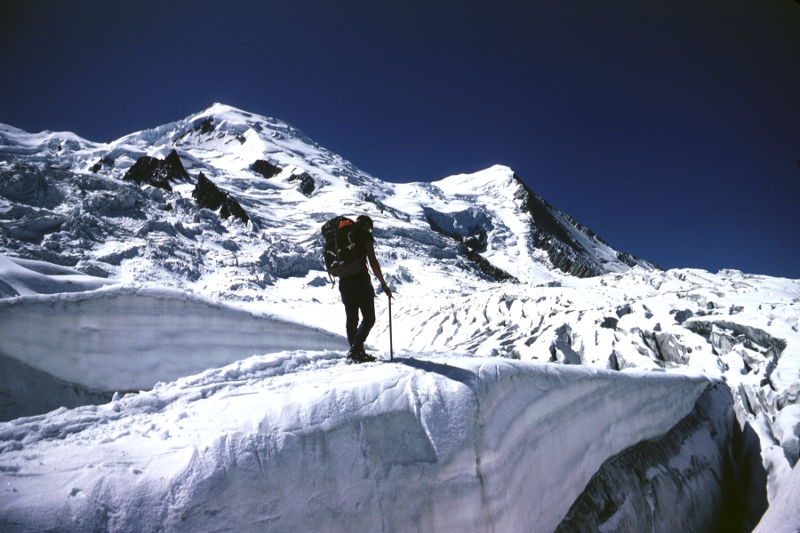 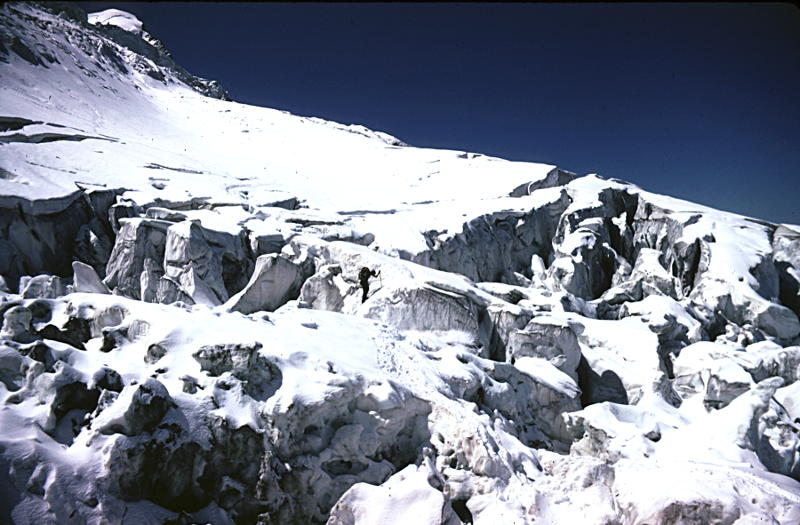 This was probably the crux, once past it got easier quite quickly

Relaxing at the hut, we were surrounded by heavily crevassed glacier, and watched an almost continuous stream of climbers descending off Mont Blanc, most tramping straight on past the hut heading for the valley. The weather was now looking settled, and the Aiguille du Midi towered above us. 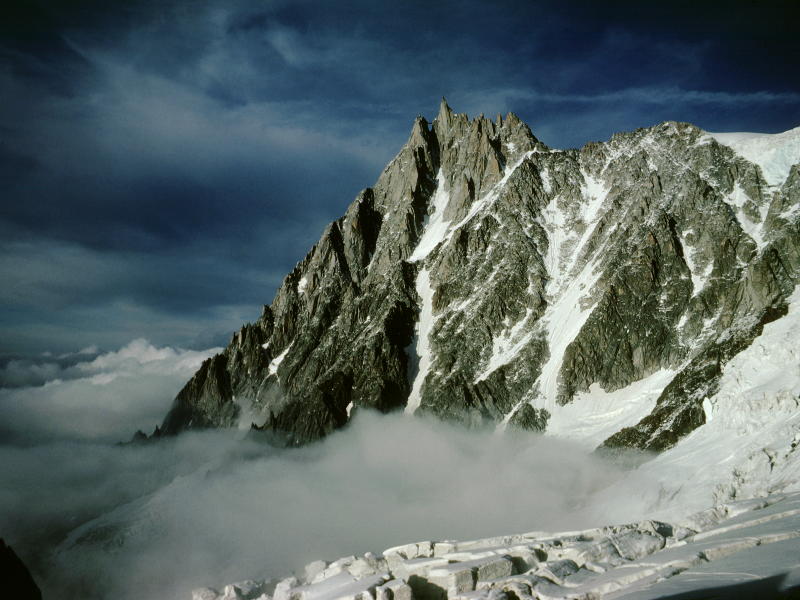 Looking back to the Midi from the hut

The climbers we had watched descending had also by now trodden down the fresh snow to leave a well-defined track which we hoped would not involve us in any trail-breaking in the morning. We opted for the “give your food to the warden and he will cook it” option, which backfired somewhat on Steve, as the warden seemed to think his instant mash was for making soup ! However, as dehydration is always an issue, it probably did no harm at all – just made for a rather odd meal. We were somewhat surprised to see yet more climbers still arriving from the valley as the sun set over the layer of cloud below us – the hut was already overfull, with extra mattresses being pulled out of the attic to accommodate the crowds. 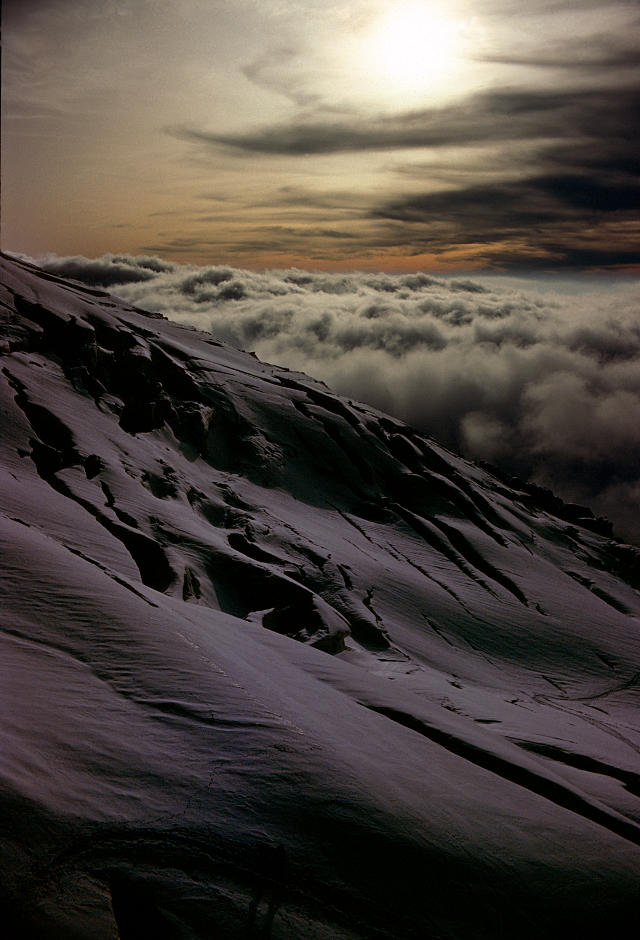 The Chamonix valley was full of cloud at sunset

2 am saw the usual frantic but rather woozy rush to get something eaten and drunk and get outside, roped up for the first section where it was still very crevassed. We had made reasonable progress by the time the sun started to colour the sky, but were clearly not going to be anywhere near the first up the mountain. Above the crevassed section is a very steep pull where we felt we no longer needed the rope, and really preferred not to be carrying it. We made a cache and left it to collect later, which aided our progress somewhat, but we were both feeling the altitude quite badly already. Eventually, as we crested the ridge, Steve pulled ahead as I slowed down even more and we reached the summit separately. 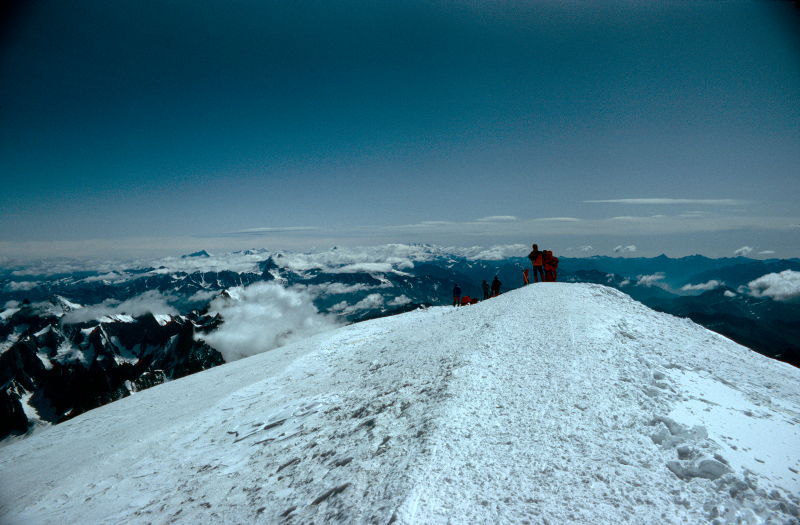 The top (of western Europe)

Descent was much easier, and fairly quick, reunited not far below the top, though we failed to relocate the rope (not a particularly new one, but a bit annoying nonetheless). We paused only briefly at the hut to pick up the gear we’d not needed on the mountain, then plodded on down the glacier – not really missing the rope, as the deep trail led over very few scary snow bridges (it was easier to see the best route in descent, too). I’m afraid we got really quite grumpy in the long queue for the ‘frique down, but having ice axes and crampons strapped on the outside of the rucksacks did make it easy to accidentally hurt bolshy Italian youths trying to queue jump, which we found quite a satisfactory result… The ridge was much quicker in descent

Back in the valley, the NPC contingent never did make it up the mountain, as the weather came in again and time eventually ran out – though not without incident, as they managed to drop Jim Birkett into a crevasse on the Bossons Glacier whilst practicing technique – fortunately he landed on a snow bridge not far down.