The Trisselwand is an imposing two thousand foot limestone face, which dominates the view across Altausseer See, next to which Cambridge caving expeditions have camped for several years. The sight of this apparently sheer face over the lake has been a challenge for some time – a challenge which Wiggy and myself finally took up during this year’s expedition. The weather was generally poor, restricting caving activities, but allowing a reccy to the bottom of the crag during a break in the rain. The guidebook gives our chosen route a III+ grade (around Hard V. Diff.), but describes 500m of climbing in one short paragraph in German, so route finding looked like being the major problem. The advance inspection showed the crag to be more complex, but less vertical, than first thought, and we decided on an early start on the first clear day. 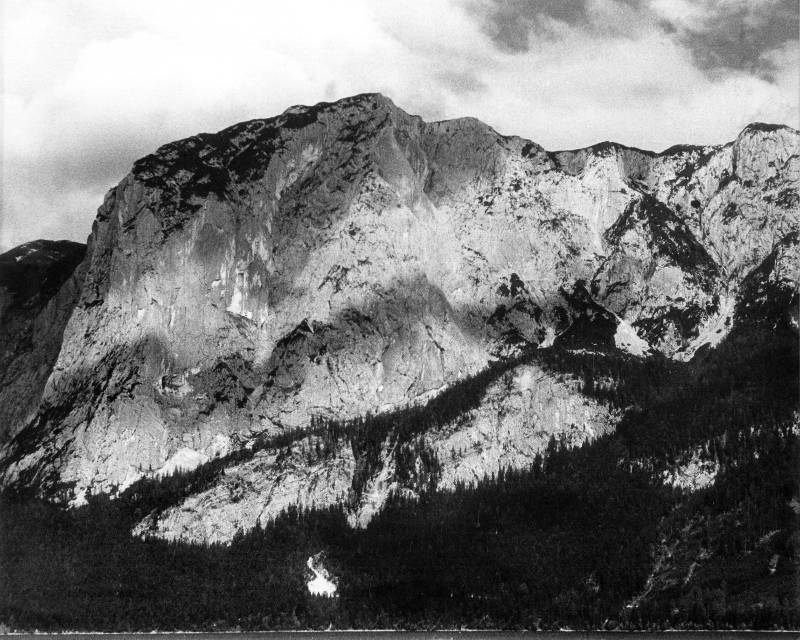 A few days later the sun came out, and our ‘early’ start got us on the rock at 11am. The first couple of pitches were easy scrambling, though poorly protected, and we set out confident that the guidebook time of four hours was reasonable. More easy climbing ( but no more runners ) led to a big ledge which took us into the ‘Hauptschlucht’ or main gully. From a distance this had looked like a steep corner, but once inside, it proved to be a fine clean-washed gully with – sheer luxury – both shady stances and reliable belays. Wiggy led a pitch of excellent bridging to a belay below a huge chockstone – a welcome relief from the now blistering heat. We had managed to pick the hottest day of the entire trip to climb the dazzling white, South-facing rock. The next pitch went out onto the face to the right, becoming suddenly very exposed, and having avoided the direct line with a fixed peg, I became a trifle concerned with the large quantity of unattached rope dragging behind me. I reached for a piton. Since we had forgotten the peg-hammer ( too heavy anyway ), I pulled off a convenient handhold with which to bash in a peg. Any peg. Any crack. Please ! After what seemed an age, one very tinny and insecure piton boosted my confidence enough to step up on small, vaguely portable-looking holds to a better traverse line above. Another peg went in, ostensibly to protect Wiggy as he climbed up to the traverse, but quite good for my confidence too. The next pitch was easy angled – a good job in view of its general mobility, but much looser rock would follow.

The guidebook says to go left for three ropelengths over ‘Plättige Schrofen’, at which stage my dictionary gave up. We assumed it was some sort of ledge system, but hadn’t quite appreciated the amount of loose rock that can accumulate on a five hundred foot long ledge ! I led ten feet up rock, and the rest of the ropelength on scree to a dubious boulder. No other belay for at least a hundred feet, so the boulder it had to be. Wiggy arrived, found somewhere safish for the sack, and led another ropelength across scree to an even more imaginary belay.

At this stage the guide says ‘don’t go too high !’, but there was real rock up there, so up we went. That this was an error became apparent when I reached a steep headwall and had to reverse 140′ down a runnerless slab to Wiggy, who was attached to one of the more esoteric pieces of modern climbing hardware – a Friend – in an even more esoteric ‘crack’. Suffice it to say that we wasted about two hours getting across the ensuing slabs. The fact that it got cooler as the sun went behind the rock didn’t ease the nagging feeling that it was later than it should be at this stage.

Somewhere on the traverse we must have joined the right route again – I found some litter by a belay in a crack with the peculiar feature of a strong outward draught. A bit tight for a dig perhaps, but intriguing nonetheless. Off to our left the world seemed to end, while above was impossibly steep. We knew that round the corner was a steep ramp that would lead us to the summit ridge, but where to go to reach it ? Wiggy thought I should drop down to a notch in the corner, but I could see that this led to thin air, so I tied myself to a rock and directed him upwards. A steep crack provided Wiggy with perhaps the hardest lead on the route, but also with more protection than we had had thus far. At the top were two fixed pegs, and a downward view to infinity, or perhaps a little beyond. I found Wiggy seated comfortably on the stance, and grinning as he pointed out an obvious line out over the drop. To gain the ramp required either a long traverse out to the left, or the ascent of an equally exposed steep little wall. I found a runner placement below the wall which made my mind up. Above the step was easier ground and more fixed pegs.

Route finding on the ramp was a lot easier than below, and fixed pegs made the exposure less unnerving. On the other hand, the pretty pink tinge in the sky suggested that speed would be an asset. Three pitches up the ramp led to a steep looking little headwall, but at the top was the summit ridge. The headwall proved easy, but the ridge was a shock – the wall must only be a few feet thick ! With three thousand feet of space each side, we were glad that the four rope lengths of summit ridge were only a scramble. The final step across to the summit overhangs our route lower down, and makes an impressive finale. We hurriedly signed the summit book as the last rays of sunlight left the sky.

Having taken almost nine hours to climb the route, on the hottest day of the trip, with just two litres of orange juice between us, we now felt suitably knackered. The evening was hot and close, and the steep walk down from the summit soon turned into an epic, with one light failed, and the other absorbed by the inky blackness of the forest lower down. Seldom has a litre of grapefruit juice vanished so fast as when we reached the campsite – and it didn’t spoil our appetite for beer !

Summary: ——– Phil Wigglesworth and Andy Waddington climbed “Stügerweg”, a 500m grade III+ route on the Trisselwand, a limestone face some 50 miles East of Salzburg in Austria. The route was technically no more than Severe but exposed and lacking in protection, and with loose rock in parts. The ascent took almost nine hours – more than twice the guidebook time, but this was mainly due to routefinding problems. The upper part of the route is very fine, with impressive situations.

Adapted from an article first published in Cambridge Underground, 1985.