On the way back from the NPC caving expedition to Culiembro (Picos de Europa), we paused for a while in the Pyrenees. The main objective was Monte Perdido, at 3355m,the third highest peak in the Pyrenees, and the highest one I’d not yet climbed. Mike Thomas drove myself and Ann Riley up to the Port de Gavarnie on a good road which ended abruptly at the Spanish border and a busy carpark. A relatively level walk then took us below Le Taillon to the Sarradets Hut below the Brêche Roland – a dramatic breach in the rocky border ridge. 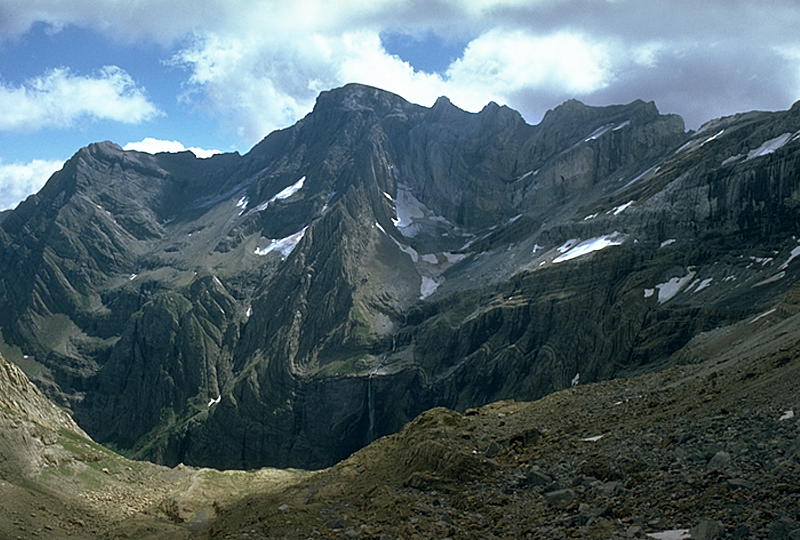 From the Sarradets refuge, there’s a very well-worn path up to the Brêche, rather bare hard snow/ice this late in the season, but pretty safe as the tourist traffic has worn a deep groove up the slope. The guide says “follow the trench in the snow” up to the Brêche Roland, here looking back down the steepest part

The contrast on reaching the Brêche was dramatic. The south-facing Spanish side was hotter, with far less snow, and far less people. The Brêche itself is clearly the objective for most of the people walking up via the Sarradets Hut, with just a few continuing a little further on the Spanish side to the Grotte Casteret, famous as Europe’s highest ice cave. Beyond a section of path secured with chains as a handrail we soon found ourselves alone on the path heading out above desert-like slopes of the Ordesa national park. The plan was to bag a minor objective on the first day, bivouac high up as near to the Goriz hut as park rules allowed, and be up Monte Perdido early on the second day, before the steep bit of that route got crowded with a risk of stonefall. At 3006m, only a couple of hundred metres higher than the Brêche itself, the Casque du Marboré was a rather fine objective above the rim of the Cirque. Ann hadn’t done much climbing, and the scramble up the short ridge, whilst easy ground, had great views (ie. quite a bit of exposure) so she was feeling a little nervous at this stage of the expedition.

This gave an interesting perspective on the walls of the cirque, which I’d climbed on an earlier visit with Andy Nichols and John Bowers via a rather zigzag route making its way up between several waterfalls, being earlier in the season and in wetter weather. The summit view was also pretty extensive, with the much harder ridge direct from the Brêche now seen from above, leading the eye to the Sarradets Hut, and far beyond, the Vignemale, at 3298m, one of the higher peaks of the range.

Looking NW to the Vignemale from 3006m Casque du Marboré

Reversing the route back to the sketchy path, we now continued east towards Monte Perdido, finding ourselves a nice sheltered bivouac within striking distance, somewhere to the south of Cilindre du Marboré, among the bands of limestone. Notes in my guidebook say that this bivouac was about 1.5km west of the Goriz Hut. 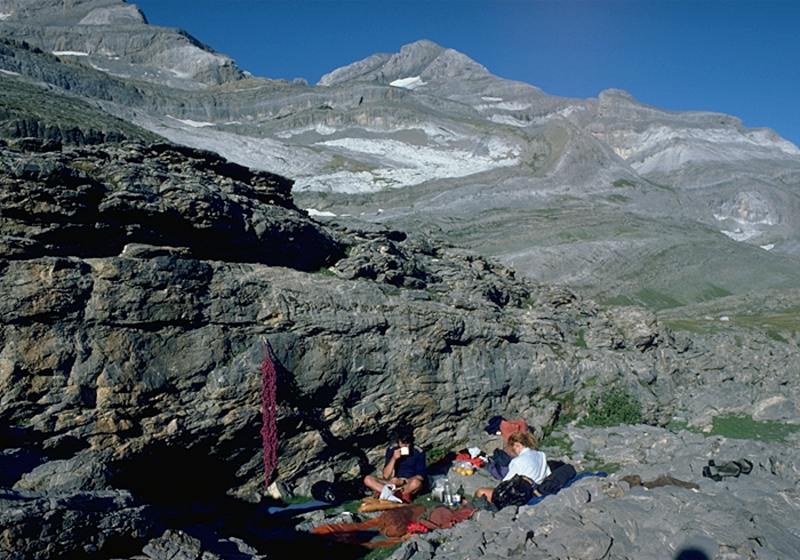 Next morning we weren’t perhaps as crisp as we might have hoped, but nonetheless got to Monte Perdido before it got very busy with people coming up via the Goriz Hut from the Ordesa canyon. This was good, as the wide couloir we’d expected to find ourselves kicking steps up was almost entirely free of snow and consequently very full of loose scree – this would have been quite a dangerous bit of terrain when it became crowded, and we hadn’t brought helmets with us. 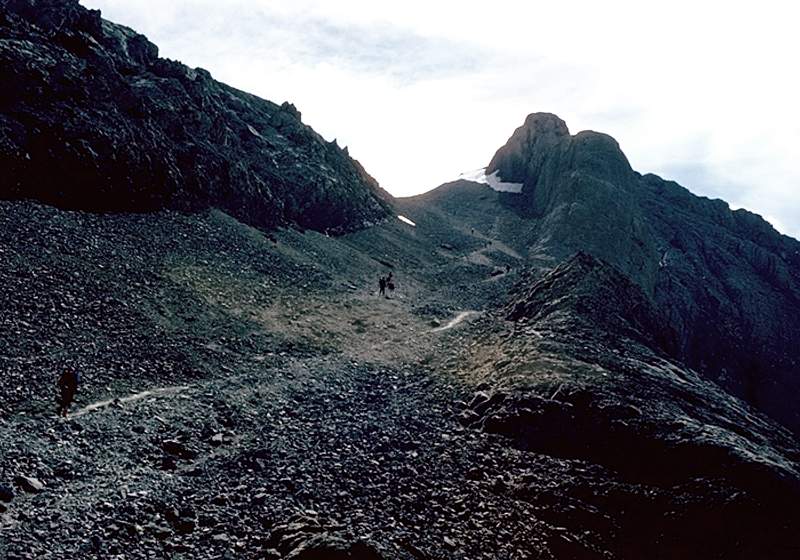 It’s a lot steeper than the photo makes it appear. Normally snow-filled, there’s no path and the scree was very loose

Despite being fairly early in the day, the summit view was a little disappointing as clouds had already started to bubble up, and the highest Pyrenean peak Aneto, with its lower companion Maladetta were already hidden. Not wanting to meet lots of folk on the scree, we didn’t hang around very long before making our way down, and we were soon away from the main paths heading back for the French side. The clouds did have the benefit of casting some occasional shade over us as we made our way west towards the Brêche, which was useful as we hadn’t wanted to weigh ourselves down with more water than absolutely necessary and there were no surface streams in this karst terrain. Very little vegetation in the karst terrain above Ordesa canyon

While glaciation has carved out the spectacular Cirque de Gavarnie on the French side, the Spanish slopes are rather gentler, and only become very steep lower down in the walls of the Ordesa canyon, so we were able to make quite rapid progress along the relatively level path. 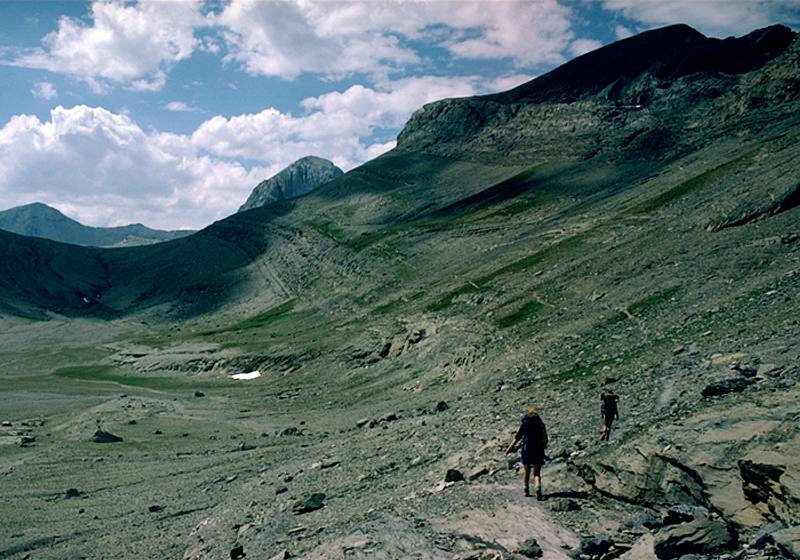 Though we met very few people here, there’s not much growing to obliterate the well-marked path over much easier ground than on the French side of the ridge.

Towards the end, the path passed close below the entrance of the Grotte Casteret, where there seemed to be a group of people visiting. It’s not an extensive cave, only 500m long and 35m deep, but has many spectacular ice formations, and is one feeder to a more extensive system explored from below, emphasising that streams don’t stay above ground for long before plunging underground. Almost back to the Brêche Roland on the Spanish side of the border, soon to be passing below the entrance to Grotte Casteret