Bank holiday weekends provide an opportunity to do a decent length activity getting far from one’s starting point. As the end of the Scottish walking season rapidly neared, daylight lengthened and the weather forecast looked very good, I took on the long drive north from Cambridge to do a three-day walk that had been on my Munro planning file for some time. Sgùrr nan Ceathreamhnan, Màm Sodhail and Carn Eighe are a big mountain group containing three high summits (12th, 14th and 22nd highest Munros) and several lesser peaks. They are a long way from the road system however you approach, but there are long ridges both north and south of Loch Mullardoch which give plenty of scope for collecting peaks en route. The idea was to walk in with camping gear on the north, set up camp at the head of the loch, do a lightweight walk with just a daysack on the middle day, and walk out with the gear at the end. Doing as much as possible on the Sunday would reduce the amount of walking on the Monday, leaving me with enough energy for the long drive back.

Having bivvied at the car at the end of the public road by the dam sometime in the early hours of Saturday morning, I was still up and off fairly early for the first ascent. It seems unlikely that I climbed via Creag Dubh (an extra 100m of ascent), which wasn’t a Munro in 1988 as the obvious route to the first Munro of the 1984 tables was up the SE spur of Carn nan Gobhar (though Creag Dubh was later elevated in the 1997 tables, so I’ll now have to go back). It is certain that the first photos I took were from this summit, 750m above my starting point. Continuing east, 200m of descent took me to Bealach na Cloiche Dhuibhe from where it is another steep pull of over 350m to the highest point of the first day’s walk at Sgùrr na Lapaich, pretty much the same height as Ceathreamhnan – four feet higher on old maps, one metre lower on more modern ones. 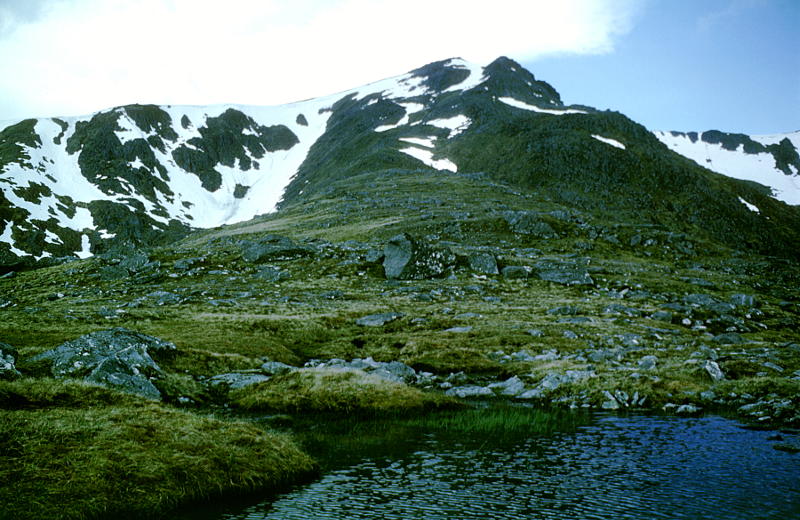 Sgùrr na Lapaich has a number of tops over 3000 feet, but these are all off the main ridge. As I was carrying a lot of kit and not actively collecting tops, I carried on westwards, dropping to c825m at the next col. This meant just over 300m of ascent over Creagan Toll an Lochain to the next peak, An Riabhachan, which is a rather fine ridge. With 1400m of ascent behind me, the views back were getting to be as good as the views ahead… The ridge continues WSW in fine style, dropping rather more gently to the western tops of An Riabhachan, which were definitely en route. The final col of the day, Beallach Bholla, is not much below 900m, which meant that the final weary ascent to An Socach was less than 200m. Arriving at the top was something of a relief – 1600m being the most ascent in a day carrying camping gear that I’d done for some years. Summit of An Socach, view back to An Riabhachan and the east

It was now a matter of a steady descent of 800m to the head of the loch and a river crossing made fairly easy by the dry weather. I didn’t have the energy to carry my kit far along the loch shore before making camp, in a good position for a lighter weight walk next day.

Sunday morning saw me with a much lighter pack, setting off up the northeast ridge of Sgùrr nan Ceathreamhnan, making fairly light work of the 850m or so of ascent over the first three kilometres to Creag a’Choire Aird, Mullach Sithidh and the day’s first Munro, Mullach na Dheiragain. 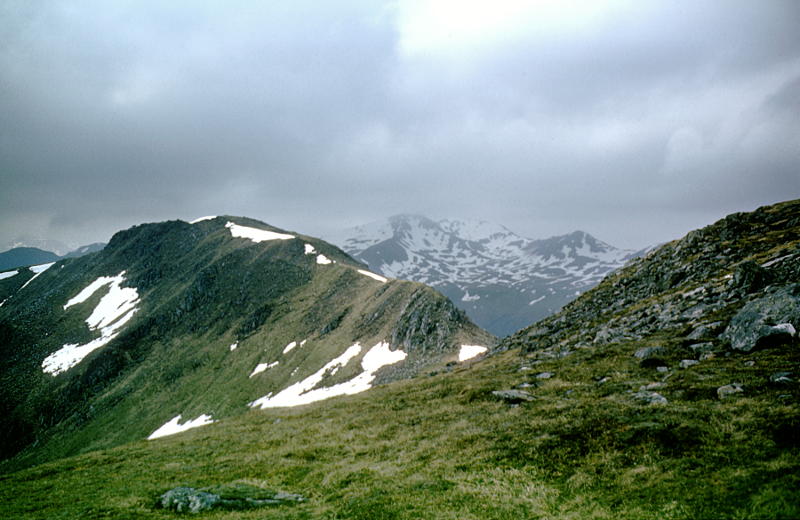 The ridge drops away below the 900m contour, and climbs back 90m to Càrn na Con Dhu, merely considered a top in 1988, but elevated to Munro status in the 1997 tables. There’s a similar drop the other side before the ridge climbs a bit over 300m to the top of Sgùrr nan Ceathreamhnan, which had an impressive amount of snow for the end of May. I was clearly feeling more energetic without the big backpack, since I took in the West Top as I eyed up the skiing possibilities. There was easily 800 feet vertical of good snow, despite the feeling that summer had arrived. It would make an excellent winter trip if it weren’t quite so remote ! The ridge east from here is a fantastic romp of almost 4 km without dropping below Munro height, as I headed over An Socach towards Màm Sodhail and Carn Eighe. But then there’s a steep descent to Bealach Coire Ghàidheil below 720m. This means that there’s really a long way back up to the big hills ahead – 450m to Màm Sodhail, where a path traverses slopes, making a graded ascent, but missing out a couple of tops which would have offered excellent views over Glen Affric. Even without the big pack, I didn’t feel the need to take in all the tops on this side. 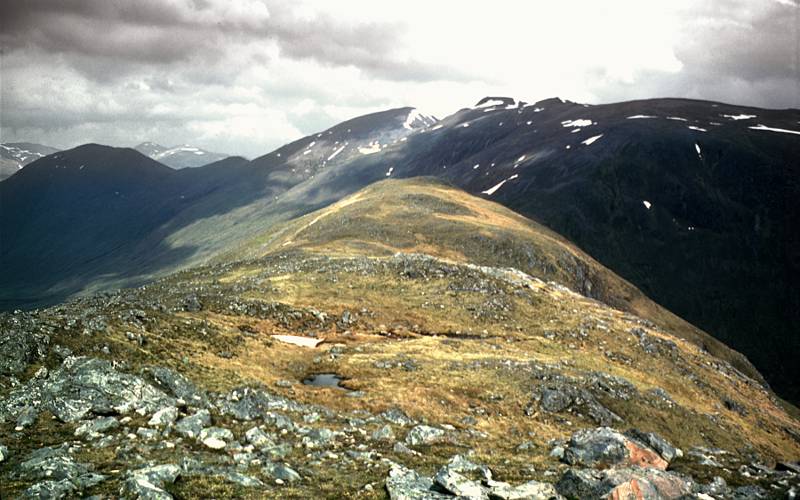 Fortunately, the 1 km gap between the two big peaks has not too much drop, and I was soon crossing Carn Eighe and looking down a long ridge to the day’s final Munro, Beinn Fhionnlaidh. There’s a high top just off to the east of Carn Eighe, which I felt no need to take in today, as it would be on my route back up to the ridge tomorrow. The north ridge took me down to Bealach Beag, leaving a fairly minor climb back up to take in Beinn Fhionnlaidh. Still, the day’s total climb was well over 2000m. It was perhaps a surprise, then, that on arrival back at the tent, I still had enough get up and go to up camp and move it almost 4km east to shorten the final day’s walk. Monday saw me with full backpack once again (at least now I’d eaten most of my food!) setting off up the side of Allt Coire an Lochain, which I crossed a little below the outlet from the lochan, before heading up steep slopes to the Bealach na h-Eige 600m or so above my camp. 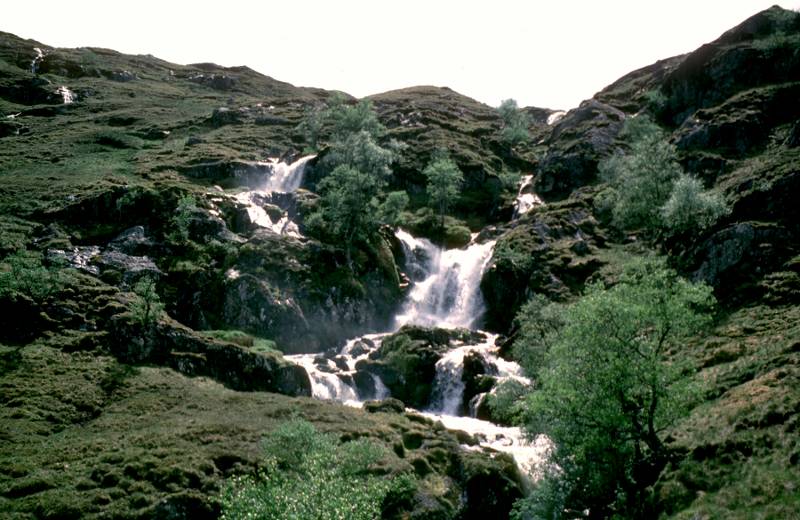 An excellent ridge now led me SW, gaining another 300m of height to the top of Stob a’Choire Dhomhain. Looking down from here, the tiny coire lochan below was still almost frozen over, looking quite out of character with the weather, which, though a little cooler today, was still more reminiscent of summer. It was now a roller-coaster ridge of ups and downs crossing more tops before reaching the day’s first Munro, Tom a’Choinich. The ridge was dry and rocky, though with the occasional patch of snow to cross. The east ridge was steep and rocky, dropping 240m to Bealach Toll Easa. The final ascent of the walk was less rocky. though the summit of Toll Creagach was still fairly rugged. The cloud had been dropping and it was now quite a dull day, but at least the rest of the way was downhill. Easy ! Well, not so easy, in fact, as it would seem that Toll Creagach is more often climbed from the south in Glen Affric. Once down the east ridge to the col below 800m, the way down northeast back to the dam was boggy, heathery and pathless, which, after a brilliant weekend of ridge walking, was a bit of a dire flog 🙁

I haven’t fiddled on to generate an after-the-fact GPS tracklog, but a quick square-counting estimate suggests a total somewhat over 45 miles and 15,000 feet of ascent which has to be quite a decent walk with camping gear for over two thirds of the distance. By the 1997 tables, that includes thirteen Munros and rather more tops (even though I missed plenty). Unfortunately, one of the tops I missed has now been elevated to Munro status – at least it’s near the dam… For pre-digital era, I took a vast number of photos, too – forty have been scanned and cut down to the best twenty here. Years later, several got me geograph (first) points, too !