Fresh from our success on the Matterhorn, despite a severe lack of altitude acclimatisation, Mike and I were now feeling good. A day summer skiing above Zermatt netted us a ski ascent of the Zermatt Breithorn at 4164m, so we had now acquired at least a bit of altitude fitness. Accordingly, we headed up from the valley to the Weisshorn Hutte, noting with a bit of concern the thunderstorm rolling round the Mischabel chain on the opposite side. Although the rainbow was pretty (and did indicate that the sun was shining from a clear sky behind us) we were hoping this didn’t indicate fresh snow on the tops for the morrow. 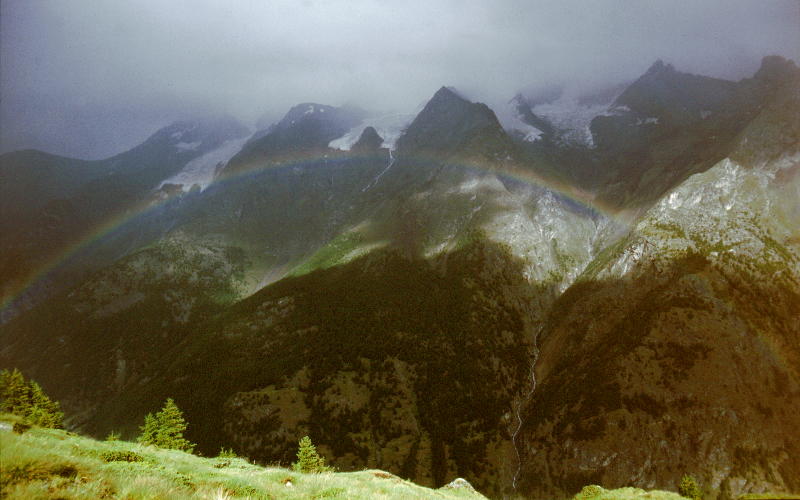 Being less popular than the Matterhorn, and in particular, there being fewer guided groups, the hut wasn’t quite such a chaotic mass of people milling about, so we got a good start. Feeling fitter, and over mostly easier ground, we were moving quite a bit faster this time, and were high on the ridge as the weather gave us a glorious day of sunshine with extensive views, especially towards the frontier ridge and our previous ascents. We found the east ridge fairly straightforward, moving together O.G.Jones style, crossing the rope over between gendarmes and rocks to provide some protection. So much so that we had no difficulty whatsoever in getting back to the hut in good time, and were soon romping back down towards the fleshpots below. 10,000 feet of descent was a bit wearing on the ankles and knees, particularly as we hadn’t bothered to bring light footwear and stomped on down in plastic boots the whole way. The weather held and we were celebrating success by late afternoon on the campsite.

We’d left the UK overnight on the 5/6th August to drive to Randa (one cannot drive further up the Zermatt valley than this, as a tourist, and there is a decent campsite here), arriving on the 8th. As the weather was good and promising not to remain so for too long, several of us headed up to the Hörnli on the 9th. Bernard Smith and his mate had been here for a while and were acclimatised, but obviously we were being a bit optimistic heading for a very high peak so soon. We reccied the first part of the route above the hut in the evening, as we would be on this in the dark first thing. Parties with guides would be dragged up very fast, so we saw no point in trying to get ahead of them – we would just get trampled. But we got a fairly good start and made our way slowly and inefficiently up. We were quite high when we met Bernard on his way back down – he looked at us, looked at the time and reckoned we would make it up and off in daylight – just. I had imagined that the fixed ropes on the top steep section would be the sort of thing you could clip an ascender to, for protection, but in fact this was a huge thick gymnasium-type rope, useful as a hand-hold but no good for clipping. We weren’t fast up that, but at least we weren’t getting a lot of traffic coming the other way, which would have made it a lot harder. We made it to the top, unlike the third NPC group who were slower and did get impeded by descending traffic – when they met Bernard he reckoned they were not going to have time, and ought to retrreat before the top if they wanted to get off the mountain by nightfall. Andy on the summit, depressingly late in the day. Photo: Mike Thomas

Going down was much easier, but it’s high and exposed, and we were not in good condition so could not afford to rush and make mistakes. This meant, however, that we were running out of time and could see that we would have to bivouac in the emergency hut on the way down. We didn’t really have food and drink for this, so it was a pretty miserable night (we were by no means the only folk to be in this state). We set off down after letting the upward-bound crowds pass, calling in at the Hörnli for some refreshment before the long plod down to Zermatt and the train back to Randa, where we met up with Kev and the other group, who were sufficiently grumpy that we immediately felt much better.