I nearly lose my balance as another gust of wind rushes up from the corrie to the south and over the ridge of Seanna Bhraigh. I am skiing uphill on skins, in a wide braking snowplough with the wind at my back and still sliding uphill, jamming the poles in to try and stay put. A few seconds, and the wind drops a little, allowing me to resume my steady plod up the ridge. This is repeated a dozen times before I turn directly away from the wind to reach the summit cairn. It’s important not to overshoot the cairn since it is ten feet short of a 1400′ drop into one of Scotland’s remotest corries ! The sun is still shining as I fight to untangle the camera from wind strewn rucksack straps without losing anything vital. Any odd item cast to the wind would next stop somewhere near Aberdeen !

It had all started normally enough. After a superb day on Ben Lawers, enthusiasm knew no bounds and a reasonable (if not exactly brilliant) forecast for Friday and Saturday led me to plan a two or three day expedition to ski the Beinn Dearg group in Wester Ross. On the theory that it is four hundred miles from Cambridge to the highlands, so an extra hundred and fifty or so hardly matters, I drove up through Inverness to the Dirrie More on the Ullapool road….

The hills of the far north are all arrayed to view, from Stac Pollaidh in the West to Ben Klibreck in the north. Back to the South West, An Teallach, spectacular in the early morning sun, is now being assailed by lowering black clouds. I decide to abandon plans to ski Carn Ban, the remotest Corbett in the known universe, and head back to the tent for a brew. This is easier said than done as the return from Seanna Bhraigh is directly into the still-increasing gale to regain the col.

Only yesterday morning, under a heavy overcast, with three quarters of my first big Scottish river for ages crossed, I had started to remember what this game was about. Hopping from greasy boulder to greasier boulder with a pair of skis and camping gear for three days, which you can’t afford to get wet, I was forced back to a long detour upstream. Yet more greasy boulder hopping and marginal wading finally got me to an hour of peat bog, a further river crossing and thence the lower slopes of Am Faochagach. The snow line was a few hundred feet higher and the skis came off the sack. True to form, the visibility dropped to ten metres.

Perhaps a veil should be drawn over the slow plod over false summits, and the slushy descent to Loch Prille. It was windless, humid and mild. The promised sunny intervals were no doubt all occurring several hundred miles nearer the Met. Office, whose accursed inhabitants have probably never been to Scotland.

Another long pull to the col behind Beinn Dearg found me a “sheltered” campsite at 2800′. Predictably, the sky now began to clear and the wind to rise. Suitably esconced with the tent pegs firmly lodged in frozen snow, it was easy just to make a brew and decide to save Cona Meall and the other peaks for Saturday. Saturday seemed set to fulfil the promise of improving weather as the sun hit my tent at 7.30 from a clear sky. The wind was a little stronger, and from the south, much as forecast, but sooner (why does bad weather always arrive earlier and good weather later than forecast ?). An 8.30 start saw me skiing up Meall nan Ceapreachean, only a six hundred foot climb and offering a fine view of Beinn Dearg in the sun, and, in the further distance, An Teallach looking serious in winter array. 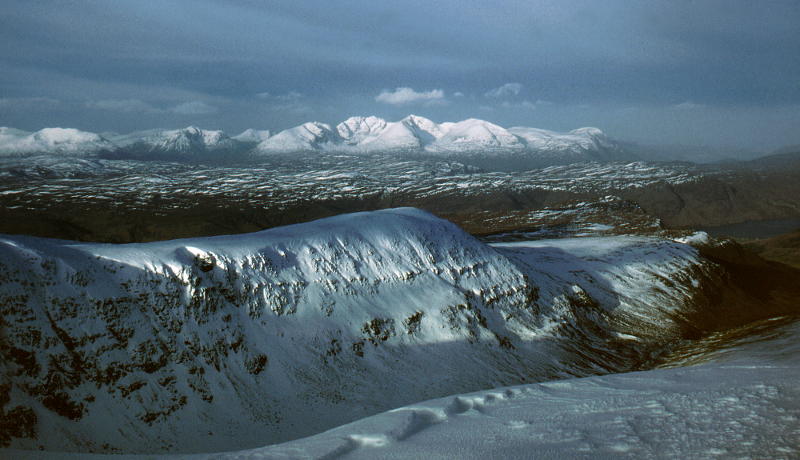 An Teallach from Meall nan Ceapraichean

I hadn’t topped a Munro before 9 a.m. for ages, so I was soon feeling very pleased and self-righteous as I skied north for the subsidiary top and then on to Eididh nan Clach Geala, my second Munro before ten O’clock, and it really was getting quite breezy. 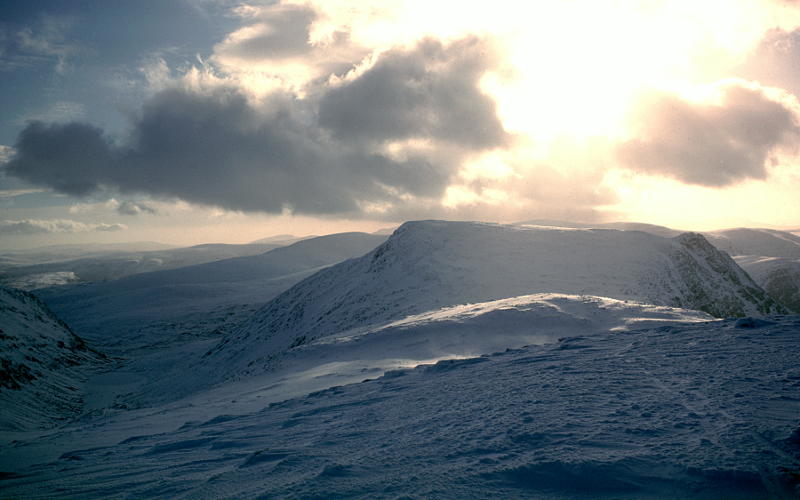 Cona Meall : Loch Prille to left, Am Faochagach to rear

A long descent over superb snow in bright sunshine led to the broad col south of the real target of the expedition, Seanna Bhraigh. 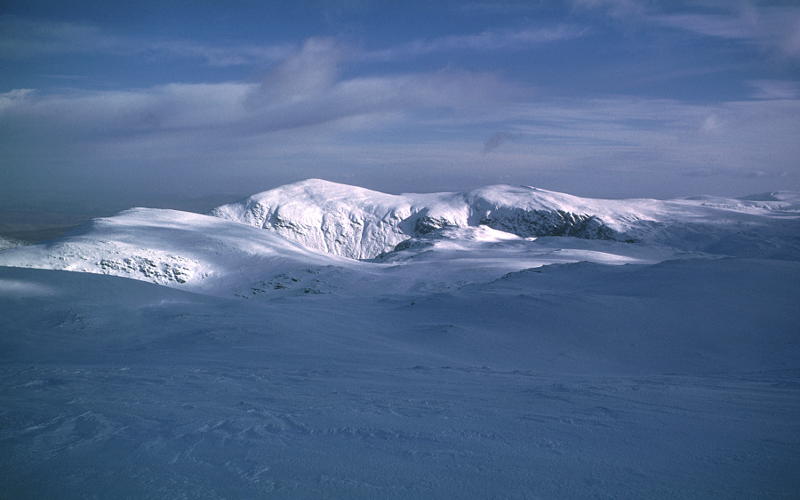 The col was quite a sheltered spot to put on the skins for the final wind-blasted climb to this remote, but impressive summit. 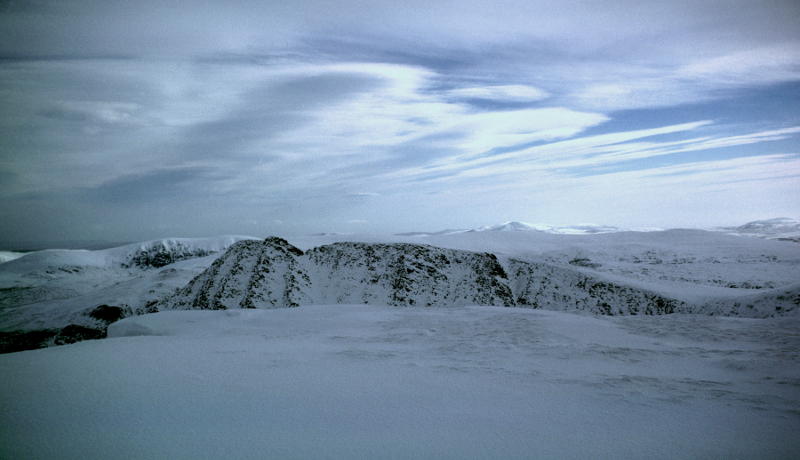 Back at the col: the rapid change in weather is looking more serious as the sky exudes black clouds streaming over Beinn Dearg. A brief stop for tea and a struggle with the wildly flapping map finds me a route following valleys, rather than compass and pacing across the open moor. 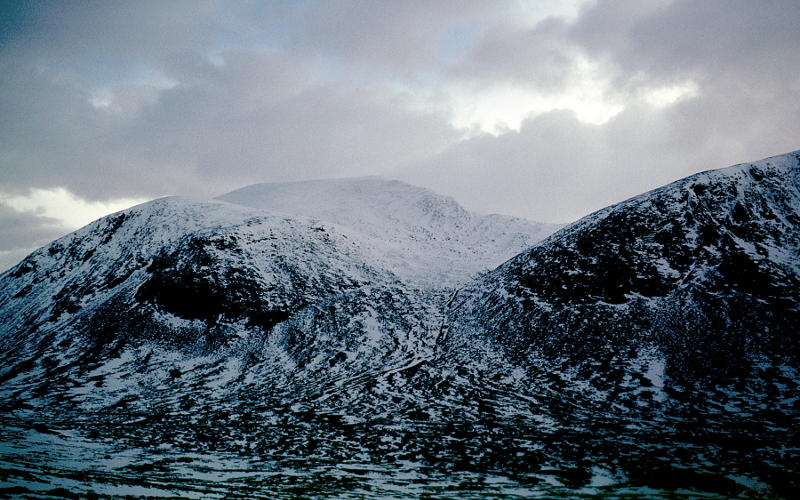 Route back from Seanna Bhraigh as storm hits

Half an hour later, sleet turns to heavy blown snow and spindrift as I climb out of one valley into the second. Up this valley reaches a bouldery area, I recognise from the morning, so just one ridge to cross, but now headed directly into the storm. Slab is building on the smoother slopes, so I thread my way between large boulders, fighting to stay upright as each new gust screams past, until eventually the almost scoured-bare icy ridge appears. 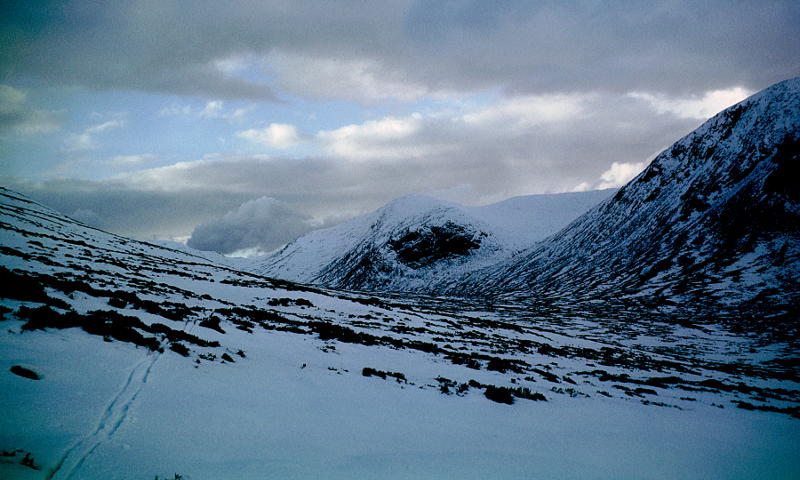 Retreat from Seanna Bhraigh as storm eases a little

Still pushing hard to head downhill I am amazed to see the visibility improve and the col and Beinn Dearg appear. Cona Meall comes clear of the cloud and I wonder idly if I could climb it today if the wind drops. First priority, however, is a brew. Since the tent was carefully placed by a good landmark, I have no trouble in finding the site, but as I approach, I notice something odd in the snow.

A tent peg. Looks just like one of mine. A nasty, sinking sort of feeling assails me as I round the corner. There ahead of me is a stove, a fuel bottle and a pair of crampons. But no tent. Investigation soon reveals pegs which need digging out with an ice axe, and guys. The tent has evidently been torn from the guys. A couple of hundred yards downwind I find another peg, badly bent, but nothing else. Since the route to chase the tent is directly away from my escape route, and time is already limited, retreat seems the only safe option.

Both the direct descents are steep, rocky, and plastered with fresh snow, madness to attempt in the gusty wind, and with the spectre of major river crossings below. The only skiable route is directly over the summit of Beinn Dearg. The one piece of good fortune in this is the “ease” of route finding : just a matter of following an old wall up the sheltered side of the mountain until it turns a corner, then 270m due south to the summit, just below 3600′. This duly materialises, as an icy cairn only just visible in the blizzard. Beyond it, still on a bearing, the descent gets more sporting. Skiing straight down a steep, but almost invisible slope into a gale on a compass bearing is an entertaining activity, best accomplished by leaving the skins on and heading down in a very wide snowplough. Legs like tree-trunks are a decided advantage, and mine are aching pretty severely by the time I emerge from the cloud a thousand feet lower.

The remainder of the descent to the valley is simple by comparison, but still leaves a river to cross. Despite being three miles upstream of my last crossing, it is now swollen by the snowmelt and rain falling at lower altitudes and takes over half an hour of searching and marginal rock hopping to cross.

Just another low ridge, and then down to the road to reach the car shortly after dark. Five Munros in two days, all on ski and a wealth of useful (!) experience.

As I say, I never have epics.

But sometimes life can get quite challenging.