Unlike the groups of peaks on the north side of Glen Shiel, those on the south side lend themselves to a traverse in a single (long) walk, starting up the Forcan ridge of the Saddle and walking east to end up at the Cluanie Inn. This was another of my projects that had been planned on paper many years earlier, so required almost no last minute organisation – just turn up and go ! This was just as well, as by late September, daylight is barely sufficient for a walk of this length. I left a bike at the private road end just east of the Cluanie Inn to return to the car (thinking it was all downhill). The ridge takes in nine Munros and one top, and a single Corbett. It’s 22 miles and 9300 feet of ascent. 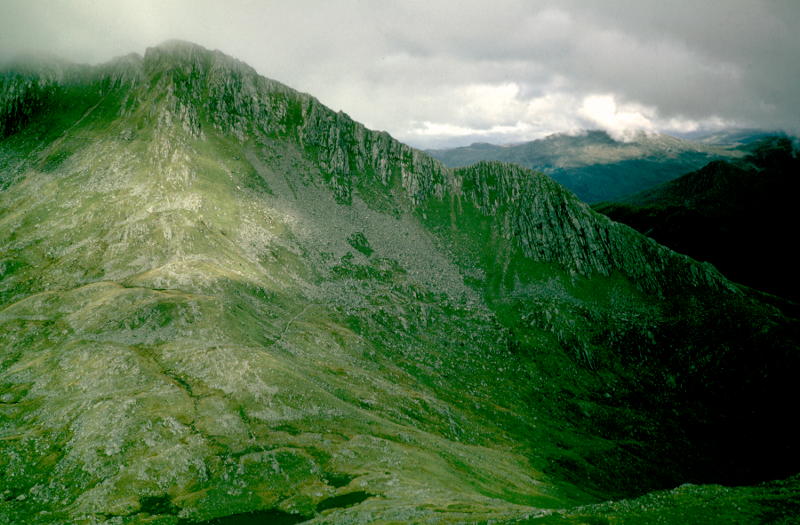 The Saddle and Forcan Ridge from Sgurr na Sgine

It’s often easier to do technical scrambly terrain uphill rather than down (especially if there is any risk of failing daylight), and I prefer my cycle shuttles downhill at the end of a long day, so my logical starting point was at the bottom of Glen Shiel. I parked (and slept) just by the bridge where the main road crosses the Allt Mhalagain, and left the road just to the northwest at all of 30m above sea level. From here I climbed the Saddle via the Forcan Ridge. At 1011m, the Saddle is the second highest point of the day’s walk, so after 980m or so of ascent, one would hope for a great romp along a long ridge ticking summits without a lot more climbing. This is not the nature of the South Shiel ridge, especially at the western end ! Bealach Coire Mhàlagain is below 700m, leading to a steep climb back to Faochag (909m – not quite a ‘top’) and the second munro, Sgùrr na Sgine, 946m. The third peak is a Corbett, which not only means that it is under 3000 feet, but also has a reascent of at least 500 feet on all sides. So it’s another long drop down to the col at 675m before climbing back up to Sgurr a’ Bhac Chaolais at 885m. 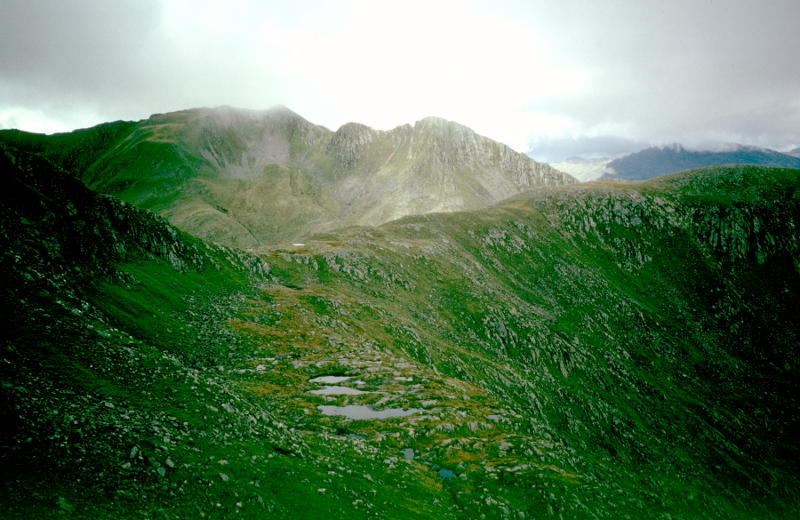 Things do look up a bit from here, with a splendid view ahead of an easy watershed ridge. 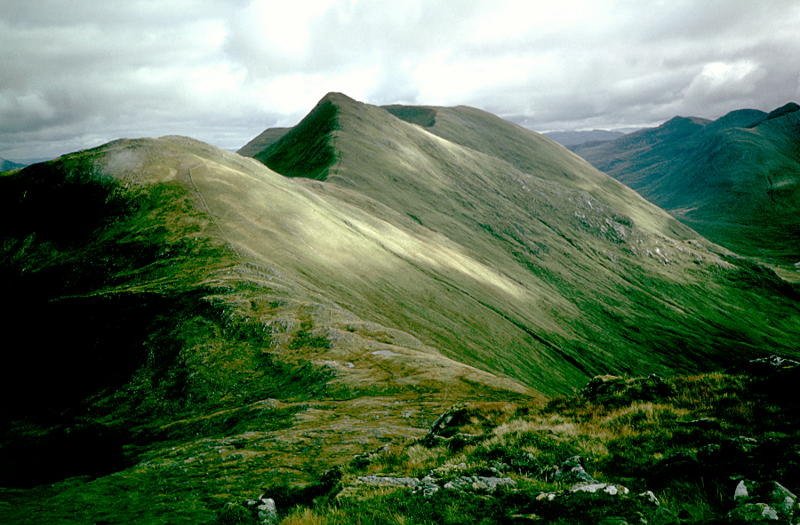 Bealach Dubh Leac is only just low enough to ensure Corbett status for Sgùrr a’Bhac Chaolais, and the reascent to the third munro, Creag nan Damh (918m) is similarly not excessive. A steep descent led to yet another col at a similar height (725m) before climbing to the fine, but statusless Peak of Sgùrr Beag (896m), followed by a minor drop and reascent to the fourth munro, Sgùrr an Lochain at 1004m. The ridge is now easier for some way, with fairly high cols linking to Sgùrr an Doire Leathain (1010m), Sgùrr Coire na Feinne (902m), Maol Chinn-dearg (981m) and Aonach air Chrith (1021m), with a commanding view over subsidiary ridges and smaller peaks. More minor peaks and high cols precede the 987m peak (and eighth munro) at the head of the Druim Shionnach ridge, which name is used in the tables for the summit itself, although, strictly, the summit is nameless as it is not seen from the valley below. The final peak, and ninth munro of the day, Creag a’Mhàim at 947m, has a fine view down to the valley in which lies the end of the walk off, to the northwest, but direct descent is not possible. The way off, rather demoralisingly, as it adds a lot of distance, is southeast down a weary steep stalkers’ path leading to a fairly level track which seems to wend its way for ages back to the Cluanie Inn where I’d stashed my bike. Here, I’d failed to appreciate how far down the eastwards-draining River Cluanie this point was (it all seems level as you speed by in a car) so 50m of ascent over the first 4km of road to the west was a bit of a shock to the system in gathering darkness (and a rather careless lack of bike lights!). Once over the col, it was an easy freewheel back to the car at fairly high speed (240m down over 8½ km) before it got dark completely. After this tour de force I felt it was unlikely that I’d want to do much for the next day or so, so returned back to Yorkshire for a welcome rest !