Yosemite valley in California is well known to readers of the climbing press for its vast granite crags, but the valley is less than twenty square km in the midst of a huge national park covering over three thousand. The park itself is only a small fraction of a mountain range including the less-visited Kings Canyon and Sequoia National parks, and vast tracts of Forest Service lands, much of it designated wilderness. I had visited Yosemite in 1981 and discovered the backcountry in a series of walks of up to six days, and planned to return to explore further, perhaps to walk the John Muir Trail, a long hiking route linking Yosemite with Mt. Whitney, the highest point in the 48 contiguous states. I had acquired a book by Steve Roper, entitled “Timberline Country”, detailing a remoter, and often trailless route, closely following the Sierra crest, and my return visit (with Mary, in 1992) was based on this route.

We only had three weeks, but, as ever, a book is merely a guide, not a prescription, so we formulated our own walk based on Steve Roper’s research. We omitted his northern section of the route, to Mono Village, and shortened the section south of Tuolumne to save a day, adding two days to walk down to Yosemite Valley itself as a finale. In the event, poor weather deterred us from one long, high, pathless section, and we downgraded this part to follow the John Muir Trail (always useful to have an escape route if hard deadlines have to be met), rejoining the High Route as it came down from above cloudbase. You can see our 200-mile (or so) route on this map (it should start up in Open Street Map Cycle map landscape layer, but you can change to Google satellite view as well as zooming in and out).

This was the first trip we’d organised using the internet (in those days, email and usenet – the web didn’t really exist), and had been in contact with a climber who had offered to drive us from San Francisco to Kings Canyon, a valley not that dissimilar to Yosemite, but far less crowded and not served by public transport. Part of that day was spent buying dehydrated food and a few other bits of kit, then we had one day in Kings Canyon to pick up our pre-arranged Wilderness Permit and do an acclimatisation walk with light packs. A very early start saw us on the backbreaking 1700m of ascent (with our packs at their heaviest – approaching 30kg) necessary to reach the high country via the Copper Creek Trail. Most of this day was spent zigzagging through forest, finally reaching tree line in an uncharacteristic drizzle – I’d barely seen a cloud for six weeks in my 1981 visit, so this was a bit unexpected, but at least it made the climb less sweaty. We made camp at Grouse Lake, just below 3200m, below a glowering overcast. Next day dawned clear and sunny, so we spent a bit of time getting kit dry before setting off on the first pathless section, up granite slabs to Grouse Lake Pass, 3368m. The Glacier-sculpted cirque of Granite Basin

The views over Granite Basin and along the knife edge ridge above the pass were magnificent – but by no means atypical of the sort of scenery we would be passing for the next couple of weeks. Although pathless, the walking today was not particularly rough compared with cross-country travel in, say, the Lakes or Scotland. This was perhaps less typical of what was to come, although dry underfoot was normal, and a welcome change from home. The next pass, Goat Crest Saddle at 3490m, was well above the tree line, and we found that bears don’t always use the woods – we’ve always known this as Bear Shit Pass since our visit. The descent to Upper Glacier Lake among drifts of Subalpine Buttercups was very attractive, but the dark clouds building over peaks that lay ahead were ominous.

From the lake outlet at 3240m, the way was down steep slickrock slabs, made more difficult by being rather wet and our being somewhat off-route. We were pleased to reach the meadow below before the weather got too bad, as lightning flashes suggested that heavy precipitation was imminent. We now found ourselves on a trail once again, and climbed gently to the lowest of the several “Horseshoe Lakes” in a hailstorm. We made camp hastily, with the ground white-over. Four days after midsummer in California, with a lightweight single-skin tent, we were beginning to wonder if this was getting a bit too serious. Lingering snow on our single-skin tent – June 25th in California, the sunshine state! 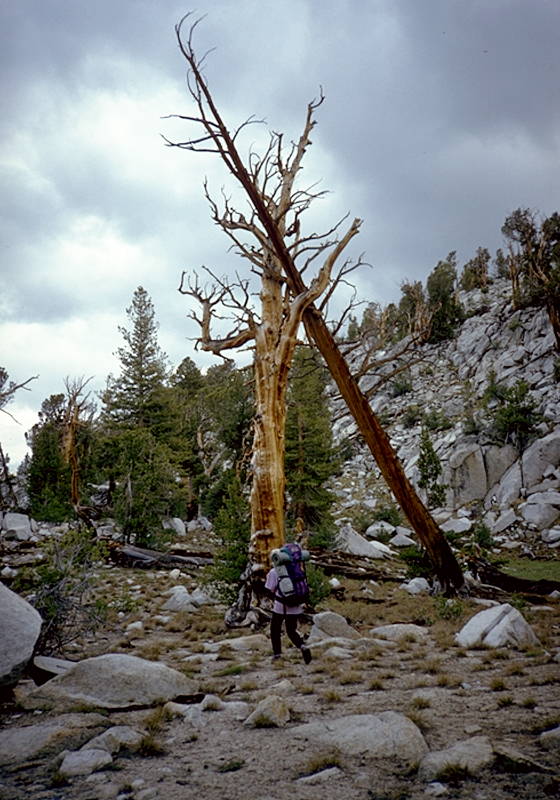 However, the skies cleared before sunset, and the weather looked brighter as we set off for the third day, another largely pathless, and somewhat rougher, trek over four high passes. Although there was much cloud, it was well above the nearby peaks, only the Sierra Crest itself being clagged in. The visibility was easily adequate to pick our way first along a series of ledges high above Le Conte canyon, passing snags as we climbed above the forest. Above treeline, we trekked along bare granite slabs between patches of dwarf willow from Gray Pass to White Pass (3565m) above the south fork of Cartridge Creek. A change to iron-rich volcanic rock saw us descending a ridge to Red Pass, and from there a steep gully led down to Marion Lake where we found enough flat ground for our third camp at 3155m. Our guidebook told us that, in a feat of exploration, a large Sierra Club party brought mules down this gully (without killing any) in 1934 – we found our own evidence of this in the form of a shed horseshoe among the rocks.

We could now drop down into Lakes Basin, a sparsely-wooded wide valley surrounded by high peaks. Wandering gently up, above South Fork of Cartridge Creek, we noted the sound of substantial rock fall. Having visited the alps often, we ascribed this to the usual melting of ice as the day warmed up, but we later learned that we had experienced the effects of the magnitude 6.5 Big Bear earthquake (preceded three hours earlier by a smaller quake at Landers, but we were probably still asleep then).

Lakes basin led ever upward past increasingly bleak lakes until we were confronted by the very steep and rough climb up to Frozen Lake Pass, at 3764m, the highest point of our walk. The north side was even steeper and rougher with big angular and not always stable boulders, but we were at least able to avoid the snow on the steepest part (we were fairly early in the season, but the guide warns that ice-axes may be needed here – we hadn’t brought ours!). We now dropped down ledges and screes into Upper Basin, where we made our first contact with the John Muir Trail. We would follow this for the rest of the day, climbing steeply by zigzags to another high point, Mather Pass, 3690m, then down into Palisade Basin. At Mather Pass, the JMT continues to climb on the north side as it seeks easier ground to descend into Palisade Basin

We took the opportunity to camp close to the JMT high in Palisade Basin – the fourth day had already been a long one, and our route on didn’t follow the trail down into Le Conte canyon. This seems a good moment to drop a map to show where we were. It’s a long walk – you’ll want to zoom in to the SW corner to see this first episode… and the CalTopo (USGS) mapping is not very clear until you zoom in quite a lot. The fifth day soon saw us entirely off the trail, scrambling up golden granite slabs to Cirque Pass, 3690m, with fine views over the Palisade Lakes back to the south. We now had a number of high passes to cross, Potluck Pass, 3710m, being the next, with good views of the Palisade Crest. Andy at Potluck Pass – no the photo isn’t tilted, the rucksacks really were that heavy !

Three kilometres west, Knapsack Pass, 3558m, opens new views over Dusy basin and an expanse of country which will take us to another very high pass on the JMT – Muir Pass. But we still had a long way to go today, as the plan was to drop down to a camp in Le Conte Canyon. Mary at Knapsack Pass, looking down into Dusy Basin

We believed we were not supposed to camp in Dusy Basin (although, in fact, this restriction only applies to those with livestock, mainly because of its previous high usage owing to its accessibility via a trail from the east side). However, the very rough nature of today’s high passes meant that we were running out of daylight. As the next several kilometres would be down the bare granite canyon wall with no camping spots, we had no option but to camp, choosing a spot well short of the trail where the high-impact areas had been. Mary on the Bishop Pass Trail, dropping into the Le Conte Canyon

The sixth day saw us joining the Bishop Pass trail, and a long rocky descent to the Middle Fork of the Kings River, near Big Pete Meadow (the earliest spot we had originally planned to camp). Here we met the only other people we had seen since starting the walk – a group who had come up from a nearer road than our start point and who were on their way back after an overnight camp. We now had our work cut out to make good time up the upper part of the canyon to reach Helen Lake (we had originally thought of camping here but were glad we didn’t) and Muir Pass. 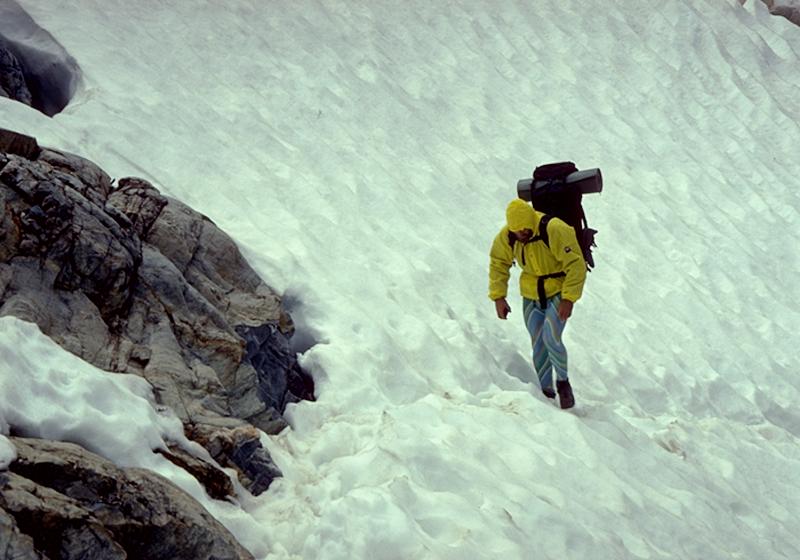 The weather was cool, and we had some significant patches of snow to cross on our ascent, but we reached the John Muir Memorial shelter atop Muir Pass in time to stop for lunch. As we ate, a vicious hailstorm passed over and, though this cleared and we didn’t get wet, there was a strong cold breeze and low clouds scudding overhead as we descended into Evolution Basin. This was a bleak scene indeed, and Mary concluded that it had got its name because it was still waiting for life to evolve. A bizarre incident occurred here as we noticed something rolling along, blown by the wind. As it crossed our route, we saw that it was a hat, making its way towards the Sierra Crest at some speed. Our timing was almost perfect, and as it was briefly caught on a rock, Mary claimed it – we saw no-one else about and heard no voices so it must have travelled some distance! This was a high point in another long day in which we were keen to keep going beyond the end of Evolution Lake to a drop off into the more sheltered valley below before camping. 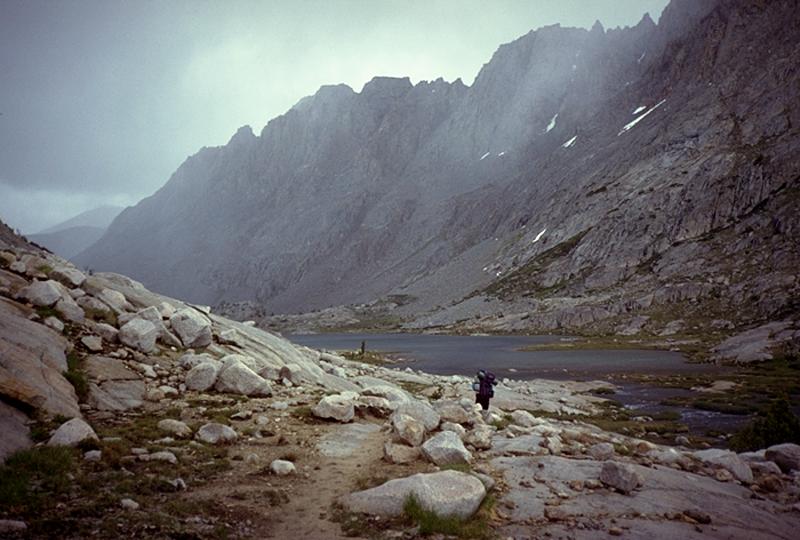 We dropped off into the deeper and more sheltered valley and soon found a camping spot on the edge of a meadow. The weather at this point meant that we went for a change of plan to avoid the pathless stretch currently in thick cloud…

For more photographs than it’s easy to include in a blog post, there is a web page which includes all the images used in my slideshow for the Swaledale Mountain Rescue Team (220, including maps) at a rather larger size (1024 pixels) than the ones above. There are even more scanned, and it must be getting near time to remaster the slideshow to work with a 1920×1080 projector…