We set off about 6 p.m. on the 25th April to drive to the alps, crossing by an overnight ferry. By late afternoon on the 26th we were at the Austrian border, on a relatively minor road. The immigration officer took away our passports to his office, then seemingly forgot about us for ages. When we eventually enquired, he waved us on, but we had to ask for our passports back. This did make us a bit later than we’d planned getting to the Ötztal valley, but we were still in time to get sorted out somewhere to stay.

We spent two days on the glacier at Sölden, not just downhill skiing to acclimatise, but also doing a bit of telemarking to keep in form. We took 14 (fairly short) lifts each day, and I skied 2443m telemark and 7112m alpine over the two days. On the 29th, we had a day off the skis, walking up from Rofen above Vent.

The 30th saw us setting off on the ski-tour proper, walking (and a bit of skiing) up to the Martin Busch Hütte, which proved to be a bit more civilised than many of the high alpine huts we’d used on summer trips, having the luxury of flush toilets, indoors ! Mindful of the fact that I acclimatise slowly, we didn’t head up to the highest peaks straight away, but had a day out with just day sacks, climbing a nearby peak called Kreuzkogel. We could skin up to the col below the summit, but reached the top (at 3360m) on foot. Andy on the way up Kreuzkogel from the Martin Busch Hütte

This day trip gave us a good idea of the sort of snow conditions we would be dealing with, and afforded us an excellent view of the route we would be taking over the next couple of days. We could also see over to the Vernagt Hütte which would be our base for the last couple of days, but our intended high point, the Wildspitze, was well hidden in a cloud cap.

Back at the Martin Busch Hütte, we got an earlier start the next day, heading up Niedertal by the route we’d looked out over yesterday: 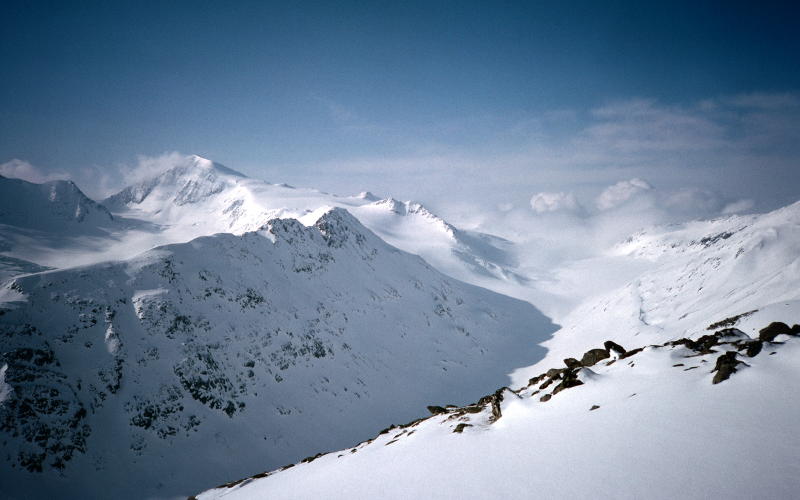 Our target was Similaun, the high peak top left

Niedertal was a long but fairly gentle ascent in the beaten tracks of many other skiers, so not particularly hard work, although we were now carrying our full packs again. Turning left, we had a steeper section to climb up the Niederjoch Ferner with a few zigzags. The top gave us a good view of the final part of the ascent, with a steep section up to the 3606m summit of Similaun. 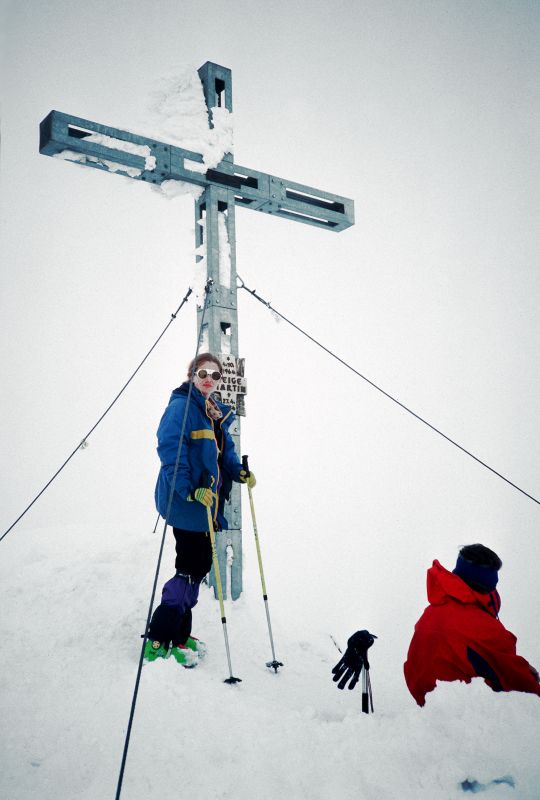 By the time we were on top, it had clouded in

Ah, this article seems to still be a work in progress – there are some more photos scanned and the rest of the story (Similaun, Fineilspitze, Hoch Guslar Spitz and Wildspitz) will be along shortly… 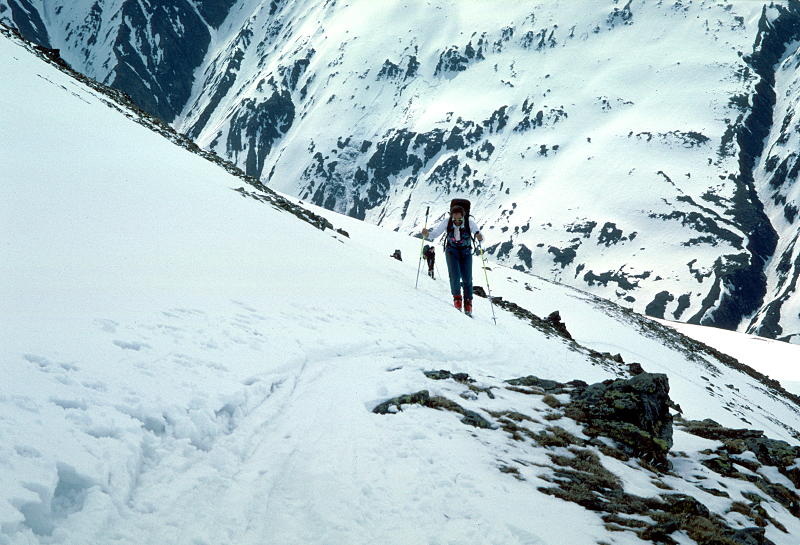 Setting off in marginal conditions (it hadn’t really frozen overnight)