I had driven up to Dalwhinnie on Friday night, and was up first thing to cycle along the track by Loch Ericht, to Ben Alder Lodge and then up over the low pass into the Pattack catchment and along the path by the Allt a’Chaoil-réidhe to just short of the Culra Bothy where I dumped most of my heavy kit and set up camp. 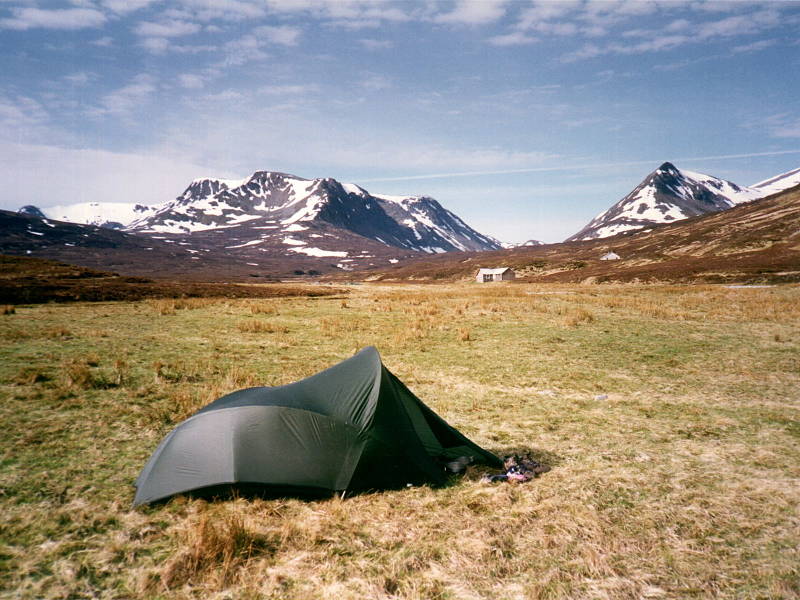 Camping a decent distance away from the Culra bothy,
looking to Ben Alder and Lancet Edge of Sgòr Iutharn

Having lightened my load, I set off along the NW bank of the burn, then scrambled up the Lancet Edge of Sgòr Iutharn – a fine way to gain the height, with views across towards Geal Chàrn – a peak I would traverse much later in the day.

Geal Charn from Sgor Iutharn at top of Lancet Edge

There was a fairly short drop to the col before climbing over a broad 1100m+ top and then up to the main 1132m summit, where fine views opened up into the Ardverikie wilderness to the north. My way was now along a narrowing ridge down to a col just over 1000m, before climbing a steeper ridge to Aonach Beag, a particularly fine triangular peak at 1114m. Dropping down the SW ridge to a somewhat lower col, the ridge curved round over a minor top and then up to Beinn Eibhinn, just above the 1100m contour.

I’m not actively ticking all the tops, but there are two outlying to the west of Beinn Eibhinn which are remote and would be a lot of work to bag if I changed my mind, so I dropped down a kilometre to the west to tick the easier one, then another kilometre south to the minor top above Glas Choire whilst I was here. The detour cost me 250m or so of reascent as well as 4km in distance to get back onto Beinn Eibhinn. More retracing of my steps down to the col and back up onto Aonach Beag, then up and across the broad slopes to the NE ridge, which drops very steeply indeed down to a col below 900m before a short reascent onto Geal Chàrn, by far the most insignificant of today’s four munros, but still with splendid views over Loch an-Sgòir to the Lancet Edge which I’d climbed some hours earlier.

It’s now a wider ridge ENE and only about 170m of reascent to reach Carn Dearg, 1034m, and a fairly direct descent back to Culra. With about 9-10 miles to cycle in, my logbook records 17 miles and 6000 feet of ascent for the day’s walking. Not a bad bit of exercise !

Sunday dawned another glorious sunny day, though perhaps a bit more haze. I crossed the Allt a’Chaoil-réidhe and followed the track heading for the Bealach Beithe, but crossed the stream below the loch to reach the foot of the Short Leacas.

This is a fine scrambly ascent of 300m vertical in half a kilometre, and leads out onto the Ben Alder plateau less than 100m below the summit. The broad slopes offered easy walking, but close to a fine steep coire facing east with big (and now rotting) cornices. 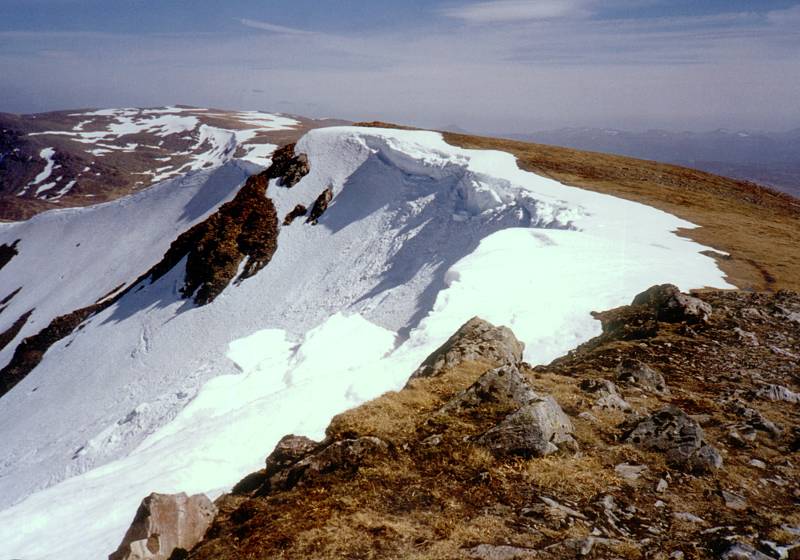 Rotting cornice – keep well away from the edge on these lee slopes !

I was soon on the summit of Ben Alder, at 1148m the highest point on my weekend walk.

It’s now a long ridge curving south around the head of Garbh Coire, then very steeply down to Bealach Breabag at about 835m. The climb back up the far side was not so steep, and went in two stages, first to the 955m top, with a drop back down below ‘the Munro contour’ and another 135m ascent onto Beinn Bheòil at 1019m with steep slopes to the SE down into the huge gash of Loch Ericht. All downhill from here ! About five kilometres back to the tent, then pack up and cycle out to the car.

This is a big block of mountains a long way from the road (which is why Culra is such an important bothy), but combining an approach on private roads by mountain bike with camping and day walks with a light pack made it a very rewarding mini expedition, with six good Munros bagged.