SOC Canoe Section tends to do mostly whitewater paddling in the winter (when there is a reasonable chance of water levels being high) and sea paddling in the summer. With a Foot and Mouth epidemic keeping everyone away from the countryside, there would be no opportunity for paddling whitewater in the summer of 2001, even if it rained. So this was this was an ideal time, one would have thought, to recruit a few new paddlers to the idea of sea paddling. I was certainly one who was attracted to this aspect of paddlesport, as it offered multiday wilderness trips without the effort of carrying big backpacks on foot. With the idea that I would need a sea kayak of my own fairly soon, I’d been to see Mike Nelson at NorthShore, and the result was that he’d lent me the prototype Calypso, which, if I decided to order my own boat (as I did), I could keep it until mine was ready. This astoundingly generous attitude ensured that I was well equipped for my first trip – an early season beginners’ trip out of Runswick Bay, though I would be using my (rather heavy and short, by sea standards) whitewater paddle.

This was Pete Bridgstock’s trip, and a full family affair, as he and daughter Ellie would be paddling the club double, with wife Wendy in her own boat and son Neil in Pete’s. There must have been at least one other person without their own boat, as I can make out the club Anas on photos…. I think there were eight of us altogether, and those in singles were put into buddy pairs to ensure that no-one got left alone. It was a bit of a steep carry down to the beach from the car park, and we cooperated in carrying the boats down (the double, especially, was a pretty heavy boat). The corner of Runswick Bay by the lifeboat station was deceptively sheltered from the northerly swell, but as we rounded the headland, things got a bit livelier. Pete and Ellie in the club double

We paddled a fairly short way past cliffs before our first stop, at Port Mulgrave, an abandoned little harbour only reached from the land three hundred feet above by a decaying footpath. Here I was introduced the the idea that sea kayakers keep energy levels topped up by stopping for a snack whenever the opportunity presents itself – it is not always possible to land and sometimes it can be a long stretch between meals ! On the beach below Rosedale cliffs, just SE of the old harbour, Port Mulgrave

Today’s paddle did not have long remote stretches, and it was only another two or three kilometres to Staithes. This harbour faces north, and waves were breaking, apparently all across the entrance, making it a little intimidating. However, there is a deeper channel which is found by not paddling towards the harbour too soon, but standing off until a clear way in can be seen. With the swell now directly behind (and not really very big) it was much easier run in than had first appeared. As we’d paddled north with the falling tide, intending to paddle back on the flood, Staithes harbour was emtpy, and very muddy. Wendy found a channel to paddle closer to the shore: 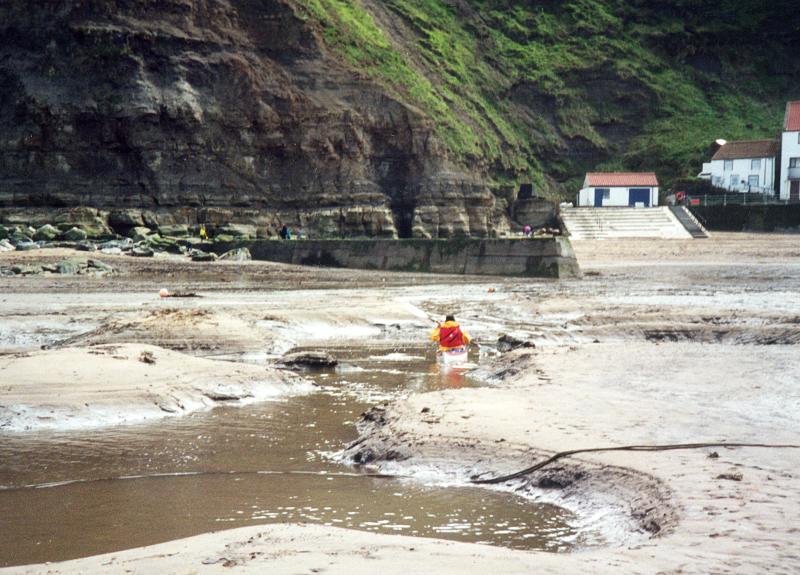 Looking for a less glutinous landing

We didn’t visit the village for ice-cream, as it would have entailed a very filthy trudge to the shore, and as the tide would soon be rising again, leaving the boats could have proved a bad idea. Since the more experienced had now got the measure of the new paddlers, we made the run back to Runswick Bay in one go – paddling out of Staithes facing the swell was very straightforward. In contrast to the very relaxed pace of the outward journey, one person in particular seemed to be on a bit of a mission towards the end and was paddling quite fast, fairly close inshore. I made a real (and generally fairly successful) effort to match Wendy’s pace, and we both arrived back at Runswick Bay a little ahead of the pack. With no non-muddy way of reaching toilets in Staithes, it turned out that getting back to Runswick was a matter of some urgency…