By a bit of deft child disposal, I was able to leave early enough to climb a swift Corbett (Beinn an Lochain, formerly a Munro) on my way north, and still get to Tayvallich before dark. As daylight faded, the still waters of Loch Sween reflected the scenery. A tawny owl glared down at me from the telegraph wire and as the sounds of the last passing car faded, the bird song became almost deafening. As dusk encroached, even this quietened and the silence became almost palpable. Occasional hoots and screams told me two pairs of owls were now hunting the woodland behind me. The near-full moon reflected on the occasional ripples breaking the almost mirror-smooth water.

The faint sound of a quiet splash drew my binocular-enhanced view to a widening wake. At its head, a dark silhouette was clearly a swimming mammal. About halfway across it dived, leaving nothing but the spreading arms of a truncated ‘V’. It seemed an age later when the otter surfaced again nearer my shore, and continued to the rocks about a hundred metres away. Other unidentified noises drew my attention away until, again, a faint splash drew my view back to where the otter had reentered the water maybe fifty metres away and was now heading back across the loch. I made a kissing noise and, like a cat, it turned my way, swimming closer. My orange jacket fully lit by the moon was poor camouflage and the otter soon decided that I was not to be approached much closer. Course resumed, and soon another dive. I saw the otter emerge and scramble round the headland near where I had first spotted it.

As the temperature dropped, I returned to the car and was soon woken from a doze as a car stopped level. “The very people” said Wendy’s familiar voice, breaking my four hour vigil. We hit the campsite where Pete put names to the dark silhouettes of Dave and Anna. Morning revealed their faces, along with those of Nick and Kath, who had arrived a little later. The late night made for a laid back start. We broke camp and as we drove the short distance to a parking spot, Tayvallich was revealed as a classic Western Scottish hamlet clustered around the most perfect sheltered bay. Not that shelter was exactly required under a clear blue sky with not a breath of wind but, amazingly, not a midge in the air. “It’s not always like this”, said Pete.

Much advice on packing a sea kayak flowed from the six experienced seadogs to the sole person being “introduced” on this introductory meet. Eventually all was stowed and away we paddled, Wendy enquiring about our intended stop for the next brew. East across the loch and NE into the broad middle arm soon brought us to the Faerie Isles and a shallow channel with a sandy bottom liberally scattered with brittle stars in the crystal water. 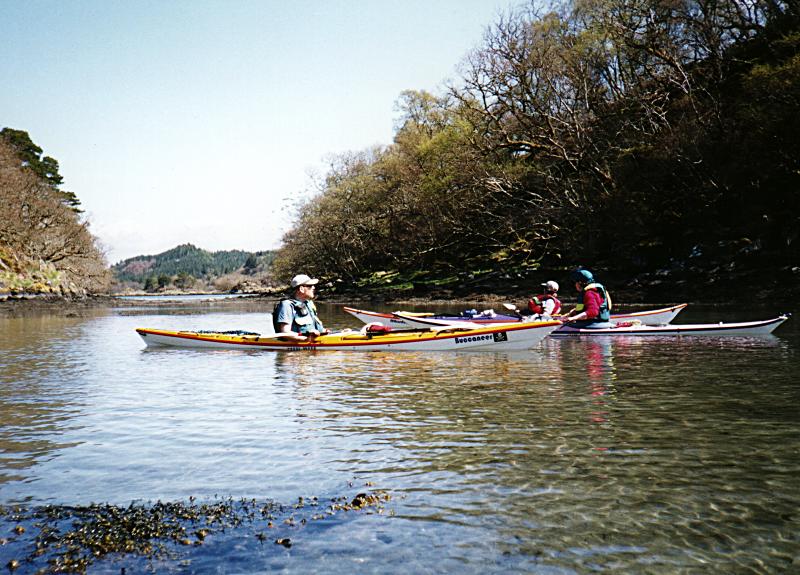 One island proved to be a peninsula at this state of the tide and this signalled a return south to the manicured lawns of Eilean Loan, where a landing was deemed untactful and lunch was taken in a more discreet spot at the south of the island. The afternoon saw us back on the water and a meeting with two other kayakers who told us that the owner of the manicured lawns was known to ask visitors to picnic elsewhere – at gunpoint! A pleasant paddle down the SE shore of the loch for 5 km led to Castle Sween, a rather busier beach and a long brew stop. Avoiding the speedboats and jetskis, we left the clamour behind and crossed the loch west to the Island of Danna. The sea conditions became rougher – waves crashed about us – at times several centimetres high. “It’s not always like this”, said Pete.

Rounding the point into the Sound of Jura, the object was to find a campsite, preferably on an ungrazed island, in view of the Foot and Mouth epidemic. Ellean nan Uan looked good, but was clearly accessible to livestock, so we returned to the tiny Eilean a’Chapuill, which made up for its lack of driftwood with drifts of Primroses. Tents were erected, brews and food prepared and stories told of previous kayak trips. “It’s not always like this”, said Pete, as we watched eider and shelduck in the bay and the sun sank into the cloud caps on the Paps of Jura. 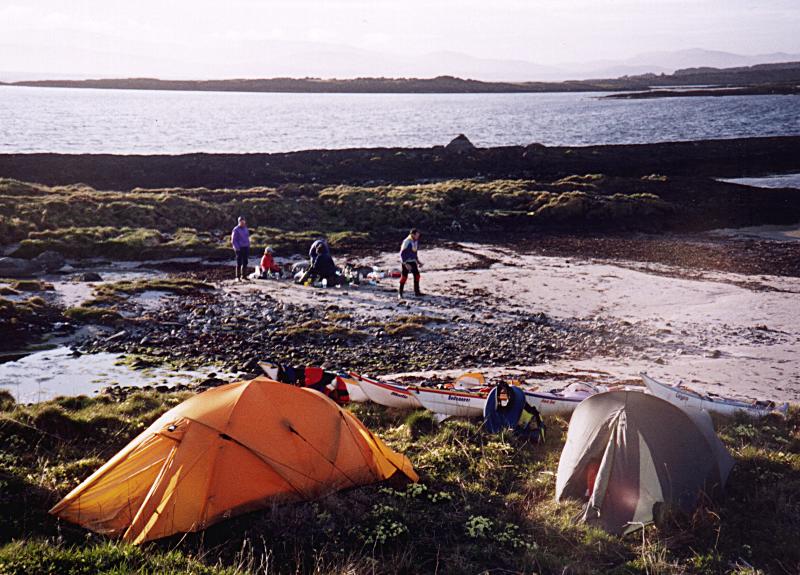 Sunday saw a much earlier start, all on the water by 9.20 and heading out into the Sound. Now I found out how all that water that fills the space when the tide comes in actually gets there as we crossed the eddy line and Pete, ahead, suddenly vectored right. But nothing to upset the equilibrium of the kayak. “It’s not always like this”, said Pete. 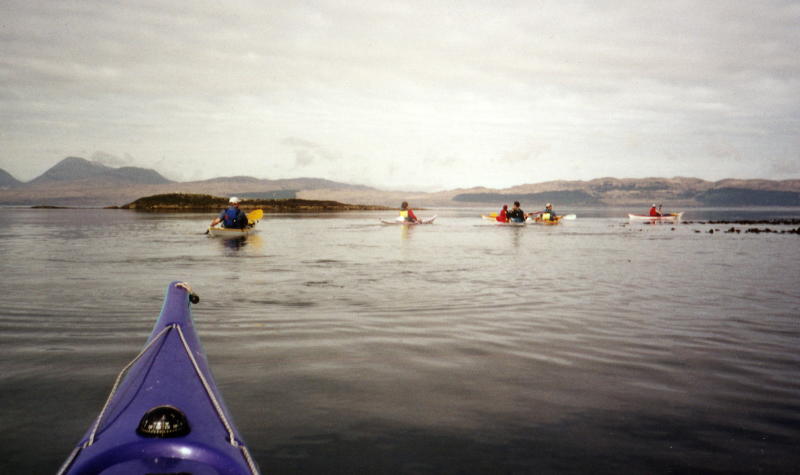 Passing Corr Eilean we soon arrived on the shores of Eilean Mor and paddled right round it clockwise to find the anchorage. Here we practised the “cliff exit” onto the ‘quay’ where Pete, having climbed out first, was rewarded with the pickings. The island proved to be an interesting place, littered with evidence of otters – spraint, broken-open crabs and sea urchins. The cave used as a retreat by monks needing ‘more austerity’ was less than satisfying to a dyed-in-the-wool speleologist on account of its taking about 40 seconds to explore, including the entertainingly thrutchy climb back out. Whilst the monks may have liked more austerity, they had, nonetheless, thoughtfully provided ample convenient seating in the sun for a relaxed conversation during which Pete emphasised that not all S.O.C. sea trips were quite this pleasant.

As the strong tidal stream up the Sound subsided, we eased ourselves back into the boats and caught the tail end for a rapid crossing back to the mainland at Rubha na Cille. By now, the Sound of Jura was starting to look like one of the top ten wildlife locations and paddling became difficult as heads swivelled to spot yet another species of bird or mammal. Pete had to point out somewhere along here that “It’s not always like this”, in case I was getting the wrong idea.

“Bored with seals/cormorants/eider/etc. – I thought S.O.C. sea trips would be exciting”. Moments later a ‘pffft, huff’ and a black shape emerging briefly from the water suggested that relief was at hand. We eased up and soon stopped paddling entirely as hands fumbled for cameras and the porpoise popped up five metres from Wendy. We watched it as it headed down the Sound, and we eventually resumed paddling in a buzz of excitement – although Pete did point out that it wasn’t always like this on S.O.C.trips.

We had a brief look at Port Bealach nan Gail, which proved to be “one of your top five campsites anywhere”, but we really felt we should camp on an island, so on we paddled to Eilean nan Coinean. The south tip of this proved entertaining as we steered between the tide racing away on one side, and rocks just below the surface on the other. Two possible landings on the west led to nice sites on top of the island, whilst two of us circumnavigated in the search for a better landing. Cormorants abandoned their rock as we rounded the north tip of the island. For a few metres, the smell of digested fish was overpowering. The east shore proved to be vertiginous almost throughout its length, and on our return to the others, getting the boats clear of the water was proving impractical and we decided that a camp on the mainland would be discreet enough. Back at Port Bealach nan Gail, the site was indeed idyllic, with sheltered flat sites for tents, running water, plenty of driftwood and a superb rock ridge to sit upon whilst absorbing the ambience which now included three porpoises fishing in the sound. Pete appeared and hinted that perhaps not every S.O.C. sea trip was quite this perfect.

Banks of mist were drifting between the Paps of Jura and filling the Gulf of Corryvreckan, adding an eerie air to the classic western isles sunset. Attempts to eat a meal whilst simultaneously watching porpoises, seals, and, any number of birds through binoculars proved that even the most perfect evening is not without some problems. An otter was to be seen by those who wandered a short way down the coast. As darkness fell, the fire blazed up and stories of past and future trips kept everyone entertained without drowning out the eerie sounds tentatively identified as a nightjar. As I drifted off to my tent to sleep, Pete reminded me that “It’s not always like this”.

I woke early and set the brew going before glancing out to sea. It soon became apparent that any patch of water watched for a minute or so would prove to contain one or more porpoises fishing in the tide. I drank my coffee with one hand whilst watching one just fifty metres offshore with binoculars in the other hand. Later, during breakfast, at least one seal was seen jumping from the water in an attempt to regain the limelight, but to no avail. Pete joined us, pointing out that it wasn’t always like this.

The weather continuing absolutely perfect, we were soon at sea in a complex dance of equipment swapping. “Have you tried Wendy’s paddle?” said someone (not Wendy). Pete, using my river paddle, reckoned if he was putting the same effort in with his own paddle, he would be flying. Basking seals on a small haul-out splashed into the water on our approach. Inquisitive heads were soon watching us from all around. We found our way through the narrow channel between Ellean Dubh and the isthmus Ellean Traighe. But it would all end too soon if we turned right now, so we headed back down the outside of the island and took the channel again. Now into Carsaig Bay and finally up to the beach, 46 km of paddling behind us. Three drivers made the short crossing of the main peninsula to Tayvallich to retrieve the cars. Brew, lunch, pack up and it was all over bar the drive home. We parted to go our separate ways with Pete’s voice ringing behind me: “It’s not always like this, you know.”

Map of the final day’s route

A quick drive to the Rest and Be Thankful and another quick Corbett to break the journey in the Bank Holiday traffic. Ben Donich proved to be a fitting conclusion to a fantastic weekend.