A chilly weekend at the start of January 2004 was my first paddling visit to Scotland (which made a change from the usual ski-touring and Munro-bagging trips).

Thursday night came and it looked as though it might be a weekend at home as various people took anything up to an hour or so to get distances as little as five miles. If it doesn’t melt we won’t get near Scotland, and if it does, the rivers will overflow ! But on Friday it melted here, raising the level of the Tees impressively. Four hours’ drive from Clive’s saw the first car at Crianlarich and a venture out to find the pub.

Saturday morning dawned cold and clear, and we ummed and ahhed over whether there would be any water at all. The non-paddlers went off to Aonach Mor skiing (and had a superb day), whilst Ann, Andy, Andy, Claire, Clive, Pete, Pete, Phil and Simon looked at the gauge on the Bridge of Orchy. “Anything below zero, don’t get on”, the guide says, “anything above two is worthwhile, and above three is stonking”. Two inches above zero. Hmmm. So we shuttled and got on by eleven O’Clock, looking at the crystal clear blue sky and snow-clad hills, and ignoring the landrover marked “Grand Canyon, Zambezi, Chile, Himalaya” disgorging two huge rafts. Clearly, they had had enough big water and felt the need for an interlude on rock.

A bit bumpy, and very cold, numerous small rapids were made technical not only by the low water, but also by the fact that we were paddling directly into the sun, low above the wintry horizon. However, nothing that needed inspection for the first hour. Here an entertaining lead-in to a diagonal slot provided the first sight of Ann trying any way except facing forwards. Finally getting the pointy end facing downstream, she dropped neatly in to the continuing river without assistance, whilst anyone called Andy sidled down the path to one side.

Pete makes a neat job of bypassing the nasty drop

The rapids got a little bigger after this, and a further hour saw us at Easan Dubh – a nasty drop not really feasible for kayaks in levels this low. The rafts caught up at this point and we watched as their leader manhandled the boat to the brink of the drop whilst the clients inside bounced up and down to try to move down the inch deep approach. This might have been more effective if any two of them had managed to bounce at the same time. However, eventually they crashed down over the top of the huge boils, neatly occupying the whole width of the river with no real chance of an upset. Looks a dull sport 😉 Raft bounced enough to make a line that kayakers walked round

Back on the river for Sore Tooth, an interesting rapid with a wide choice of lines, for those who managed to get down the initial boulders. Some discovered a hole into which they plummetted, finding the rocky bed below before popping back up into the sunlit surface world. Others found a sneaky line to the left ending in a flying leap. One found a large pinning rock well above all the interesting bits and it took some while to extricate the boat, after which its owner portaged river right over bog and willow bushes. Somewhere in that process, some Scottish bog or river monster cut a neat slice through the bottom of the boat, discovered shortly later as the paddler started to find that the river level was coming up fast – inside the boat. By this time, our third hour on the river had passed. Lots more sporting rapids followed, with a few short breaks to empty one boat. A last hour or so saw us reach the final drop of our trip, Witch’s Step, which Clive ran on sight, with some aplomb. Pete Ball had popped out to inspect, and waved Phil forwards on the same line “straight down the slot!” This proved not, in fact, to be the ideal line as Phil disappeared into the maelstrom, to roll up among the ice floes a few metres downstream. A more considered approach, after inspection, by four others, saw a line pioneered by Pete Bridgstock avoiding the fatal slot by a wide ledge on the right, powering off the edge to avoid the foaming trap, and bringing a broad grin to Pete’s face as he calmly paddled to the take-out. Pete Ball on the ledge line

Upon returning to the hostel, we learned that the finest skiing conditions in living memory had been enjoyed by those who took that option. Andy decided that a spot of ski touring would be the ideal alternative activity for the Sunday, so as to avoid the perils of paddling with a four inch hole in the bottom of the boat.

Scottish weather being what it is, Sunday morning dawned wet and mild with a forecast for lowering cloudbase, rising temperatures, and elevated avalanche risk. Back to the other, other, plan A, via Nevisport in Fort Bill to buy three rolls of duct tape. Spean bridge saw a gloomy party taping up Andy’s kayak under Pete’s umbrella in the drizzle before shuttling down to the bottom of the Spean gorge to be greeted by the delightful resident of the house by the Mucomir power station who has a refreshingly positive attitude to canoeists. He’s positive he’d like a law against them, it seems. However, in keeping with the positive theme, we assured him cheerfully, as ambassadors for the sport, that we were respectable middle aged home owners ourselves, and certainly wouldn’t be doing any of the things he suggested would typify our type. Except, of course, parking perfectly legally off the road surface just down the road.

If the weather was warmer, this couldn’t be said for the water, which was low and still frigid, as Andy rapidly discovered by falling in right at the start for no discernible reason. Half a mile later he finally managed to warm his hands up by doing a more thorough job of taping up the kayak, having been rendered sinkable once more by a succession of shallow shingle rapids. 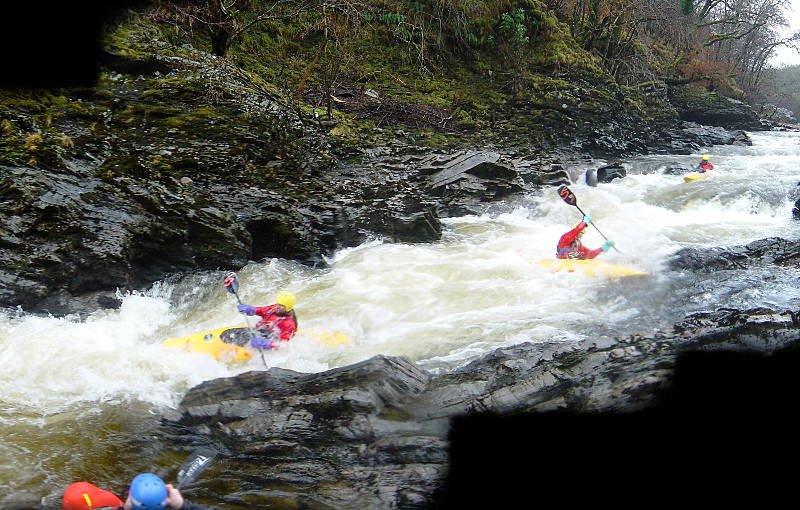 As these ended, the river narrowed into a gorge with a succession of entertaining rapids. Everyone admired Clive as he made a very tight breakout on “Fairy Steps”, rather spoiled by his admission “It was nothing to do with me, I just got ejected into it !” 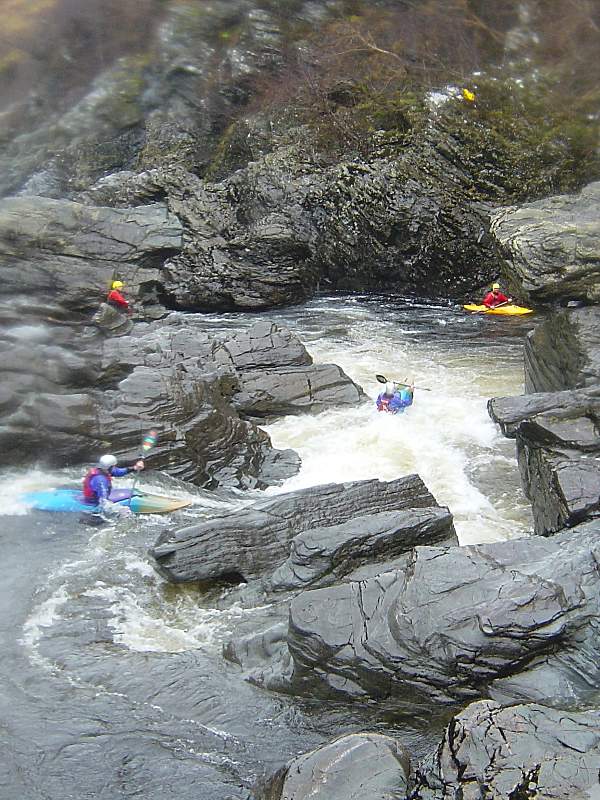 Numerous pool-drop sections with entertaining boils saw several rolls and a few swims. It came down to whether portages or swims looked more likely to cause grief, and some sporting seal launches were the result of compromises between the two options.

Finally, a long flat paddle to the takeout – but no little beaches to empty rapidly sinking boats. A lean forward enabled Andy to know what it feels like to be on the conning tower as a submarine starts to dive, but luckily the end came before total submersion…

The drive home was, if anything, wetter than the rivers. Thanks to all drivers, organisers, and fishers out of the sink-or-swim fraternity.