Although some limited work has begun in 2014 on a boat to my “Borealis” design, the project dates back way longer than that. Here’s the Strongback built for the project, shortly after completion on 2004-04-26. I’ll add a few photos of other more abortive bits of work towards this design shortly… 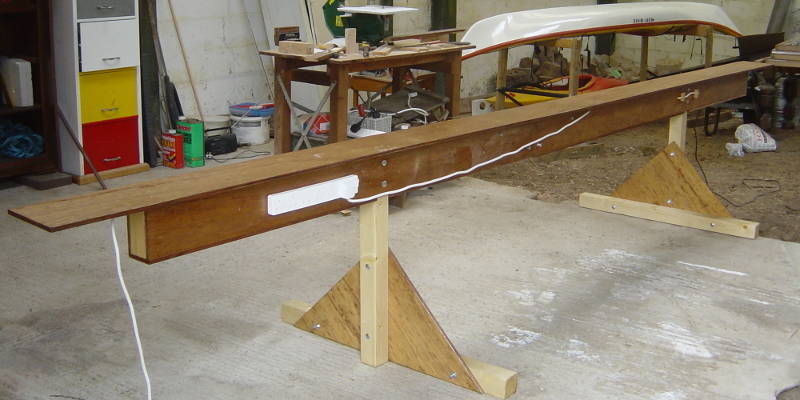 It was still clean then! 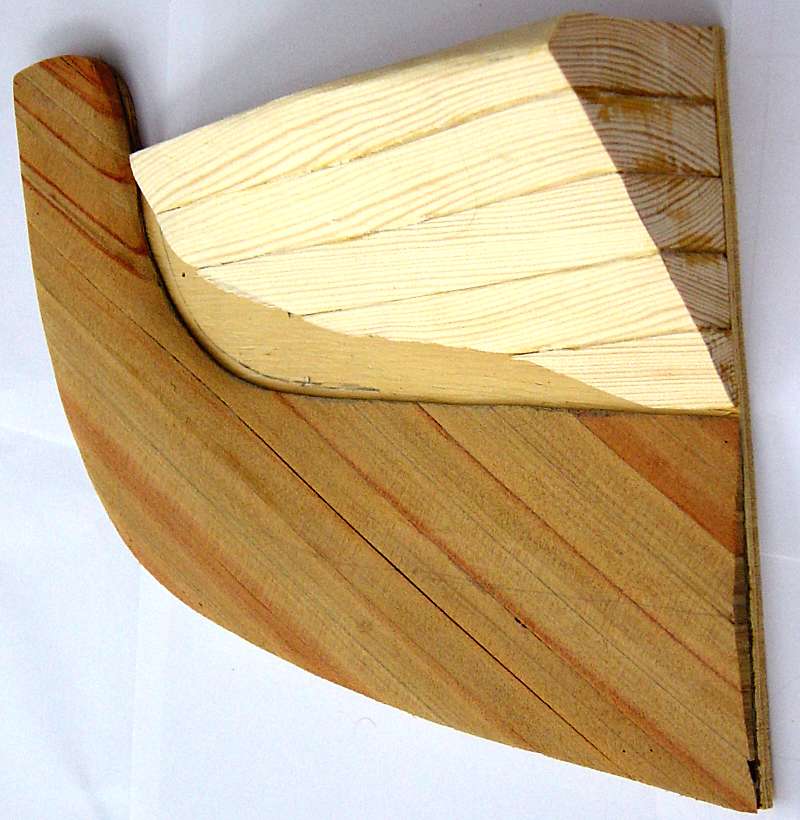 The SOC Easter sea trip – billed as Skye, but our rendezvous would be Mallaig, and whether we crossed to Skye or avoided the open crossing and headed up to Knoydart via Loch Nevis depended on the forecast. Waking up a few miles from Mallaig at Morar, there wasn’t much wind, and the sea state looked OK, so we duly parked up at Mallaig (a small town which is a tourist port of call in the summer and setting off point for the Skye ferry, still used despite the building of a bridge further north from Kyles of Lochalsh). As usual for the first camping trip of the season, extended faffing delayed getting on the water until almost eleven, at which time the tide was falling and the winds maybe two to three off our port bow as we headed out of the harbour.

For those who had not been paddling rivers in the winter, the six mile crossing to Aird of Sleat was perhaps more than really required for a “warm up” and became a little slow towards the Skye coast. A handy cove was soon spotted, and lunch restored everyone’s spirits. Rounding the small headland of Ard Thurinish, paddling quietly over kelp beds, we surprised our first otter of the year, who hastily dived out of sight. Following increasingly wild coast to the southwest, now beyond even the minor road leading to Aird of Sleat, we were torn between two attractive beaches, but soon opted for the one on the last narrow spit of land connecting the Point of Sleat to the rest of the peninsula. 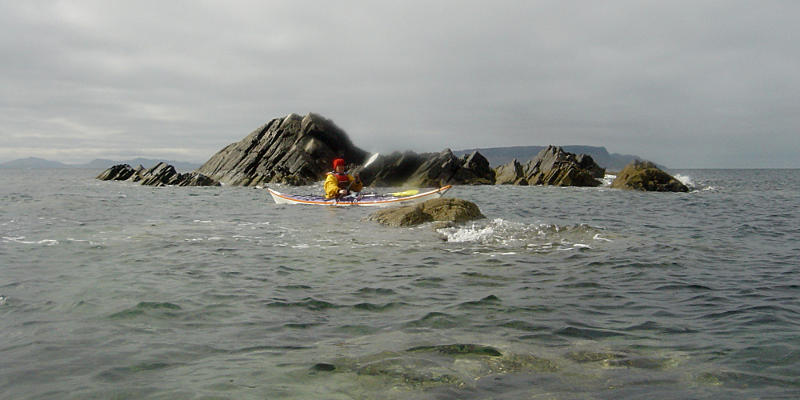 This ensured a good view of both the Sound of Sleat which we had crossed, and the more exposed west-facing coast which we would paddle tomorrow if the forecast continued promising. Saturday’s plan was to paddle up the west side, for half a day, turning back early to seek shelter back into the Sound if the weather blew up, or returning to the same campsite if the day remained calm. On the water by 9:30 and quickly round the point below the tiny automated solar-powered lighthouse, we were again facing the wind, now mostly no more than force two, and with a gentle swell to make rock-hopping more fun. And much fun it was too. This is a riven coast, far from habitation apart from a couple of isolated buildings at its southern end.

Many rocks and narrow channels below the cliffs and the odd cave kept us entertained for some time as we worked our way north with a brew stop in a narrow seaweed-filled cove. 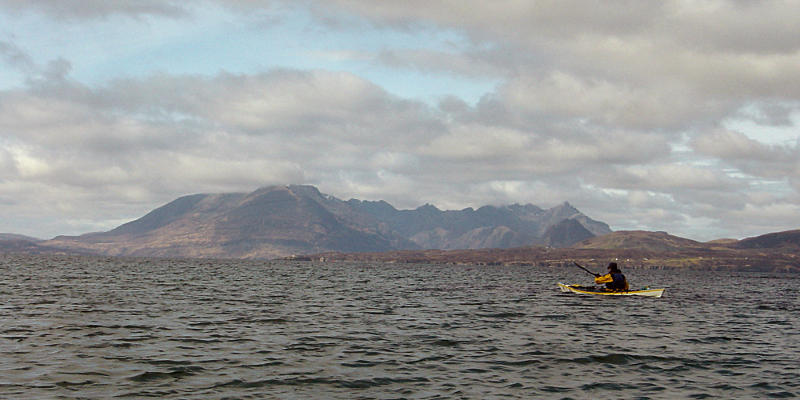 We stopped for lunch on a perfect sandy beach at Inver Dalavil with a splendid view of the cloud-capped Cuillin hills – Britain’s most rugged mountains.

The forecast was for the wind to back SW, which would give us a head-wind on the way back if it happened soon, but the clouds continued to lift until almost all the tops were clear and we had fine views not only of Skye but of the smaller islands of Rum and Eigg, now clear of cloud. With the breeze behind us we had time for further rock hopping on the way back to our previous campsite, which was re-established after a brief inspection of the other beach which looked idyllic but lacked flat tent spaces.

Paddling back down the Sleat coast in improving conditions, with Rum behind

Easter Sunday and the Stornoway coastguard’s morning forecast had put back the change of wind direction for a day. This meant that the Sound of Sleat continued sheltered and we were again off well before ten, heading back ENE, soon passing Ard Thurinish and starting to explore a new stretch of the coast that we hadn’t seen on Friday. This is still a rugged and attractive shore, despite the presence of the minor road 200′ above us. There is an excellent rock arch just before our lunch stop at Sgeir Mhic Eachain.

The plan now was to cross the Sound of Sleat back to the mainland in Knoydart, north of Mallaig and separated from it by Loch Nevis. We paddled north of Armadale, to be sure of not meeting the Calmac ferry with its big wake, but paddling further north would not shorten the crossing unless we went about 4 miles up the coast, which would still knock less than a mile off the width of the sound. So from just off Armadale castle we picked out the buildings of Airor, almost hidden in a heavy shower, and headed east on a bearing. Tidal flow is weak this far south in the sound (being much stronger in the narrows up at Kyleakin), and the spring tides of a couple of days earlier had already subsided substantially, but we expected any drift in the tide to carry us southwards, which would shorten our crossing.

Paddling across the Sound of Sleat between showers

Halfway across, as the shower cleared ahead and another appeared from behind Ornsay, we changed bearing to head directly for Doune, the westernmost buildings on the Knoydart peninsula. This made the crossing just about four miles, with very little wind. The heavy shower appearing over Ornsay was making no progress towards us as we paddled a little way south of the buildings to find a deserted little lagoon and beach for a brew.

The wind was starting to freshen a little as we set off south again, giving a bit of chop and some reflecting waves at the foot of the cliffs to play in the “chuck and suck” zone. Passing between the peninsula of Eilean na Gamhna and the island of Eilean Dearg, we entered the calm waters of Sandaig Bay to be faced with a choice of several attractive beaches. A boat at anchor in the biggest bay, and buildings near others, narrowed our choice, and investigation showed the most promising looking site to have a rather long bouldery carry to reach the top of the beach, where a narrow bealach to the main part of Inverie Bay promised windy camping. The next beach back was all sandy, with just enough flat grass for our three tents, and plenty of driftwood for our fire. We were treated to a classic western isles sunset over the small islets of Sandaig Bay, and only the briefest of showers, despite the threatening skies earlier in the afternoon. Knoydart has perhaps the most rugged mountains on the mainland, which are also among the hardest to reach on foot from the road system. Although there is a road just over a mile from our camp, this is only six or seven miles long, and completely remote from any other roads. However, the tops were hidden from us by both the cloud and intervening terrain. Across Loch Nevis, the brooding crags of Sgurr an Eilein Ghiubhais caught the last of the evening sun.

Monday was to be a short day, to give us time to travel back south to England in the bank holiday traffic. We continued east around Rubha Raonuill to pass the really out-of-place monument at the entrance to Inverie Bay. A brief paddle round some of the islets was all we really had time for, before heading a mile south across the entrance of Loch Nevis to the North Morar coast. This was potentially a more serious crossing than either of the longer ones earlier, as there is a remarkable amount of traffic for such an isolated area, no doubt accounted for by the lack of any road access to any of the small communities on the Loch’s shores. 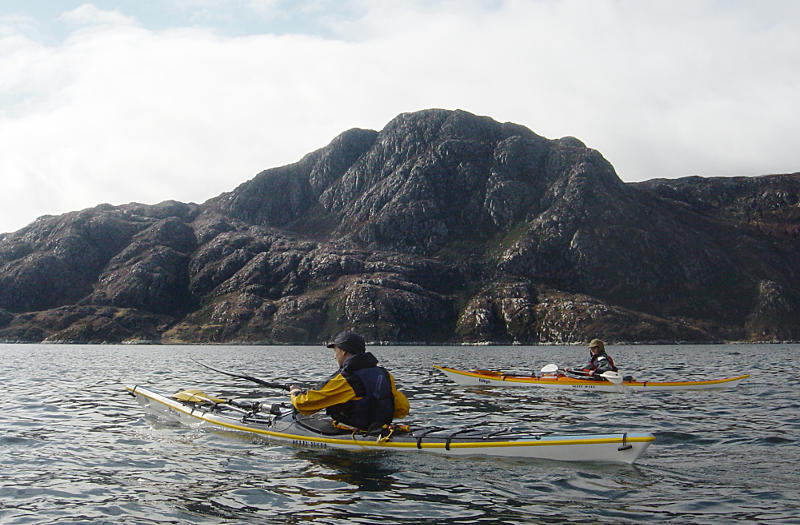 Nick and Kath Bulmer in Loch Nevis, looking across to Sgurr an Eilein Ghiubhais

However the one fast boat powering towards us was clearly keeping an adequate watch, as he slowed to avoid hitting us with too big a wake, and the waves we got were almost perfect for surfing towards our destination.

Another tiny shingle cove at the foot of the crags served for a final brew stop before heading west against an increasing wind towards Mallaigmore where the rain finally arrived. Another mile or so saw us rounding the point, to turn south in bouncy seas into Mallaig harbour, where we arrived a comfortable five minutes before the ferry.

All in all, a satisfying three and a half days and 42 miles of paddling. My thanks to fellow Swaledale Outdoor Club members Pete and Wendy Bridgstock and Nick and Kath Bulmer – and to Clive Hall for the outline trip plan before he had to cry off to work.