Sea kayaking is more about what you do than where you do it, and since the sea can be very unforgiving, it’s often good to learn the ropes in more sheltered places with easy escape routes. Daytrips on English lakes are a good way to start, but they don’t have much of a “wilderness” feel. Scotland has some really big inland lochs that can offer multiday trips, either just for the kayaking, or to reach some remote walking country. Loch Shiel had been on our list for a while and it seemed like an excellent venue to take the kids on their first multiday paddle.

The inland end of Loch Shiel is dominated by the memorial at Glenfinnan as the place where Bonnie Prince Charlie first landed (on a rising tide, a strong team can row up into the loch from the sea). That makes it a bit of a tourist mecca, but we readily enough found somewhere to camp away from the road on our arrival late in the evening. Being midsummer, the midges found it even easier to find us, and we were thoroughly bitten in the short time it took to put up a couple of tents and throw ourselves inside.

They weren’t quite as bad the next morning as we hastily packed up and located a spot to put-in and load the boats. By the Loch shore there was just about enough breeze to keep them at bay, which was just as well, as there is a lot of faff in packing a sea kayak for a long trip, especially with people who haven’t done it before. However, since one of our boats was our fairly cavernous new sea double, we probably had a bit more space to play with than would normally be the case and it only took an hour or so before we were on the water. We also had two single sea kayaks, and set off with Mary in Andy’s North Shore Mistral, Sarah (almost ten) in Mary’s Romany; Andy and Michael (seven) in the double.

Sarah in the Romany, Mary in the Mistral, Loch Shiel

We weren’t planning on huge distances each day and there are no tides to give critical timing windows, so we took a leisurely approach with lots of stops on the way. It didn’t take long before the sounds of the road and the bells in the church fell away behind us, and there was little or no other traffic on the loch, which has no road on one side, and only a forestry track behind a locked gate on the other, very quickly giving a feeling of remoteness. It was still hot and muggy, but a little overcast and misty on the tops. Midges mostly weren’t a problem on the water, but soon found us at each landing, so the kids found an enjoyable occupation in collecting sticks and getting a smoky fire lit very quickly at each pause. 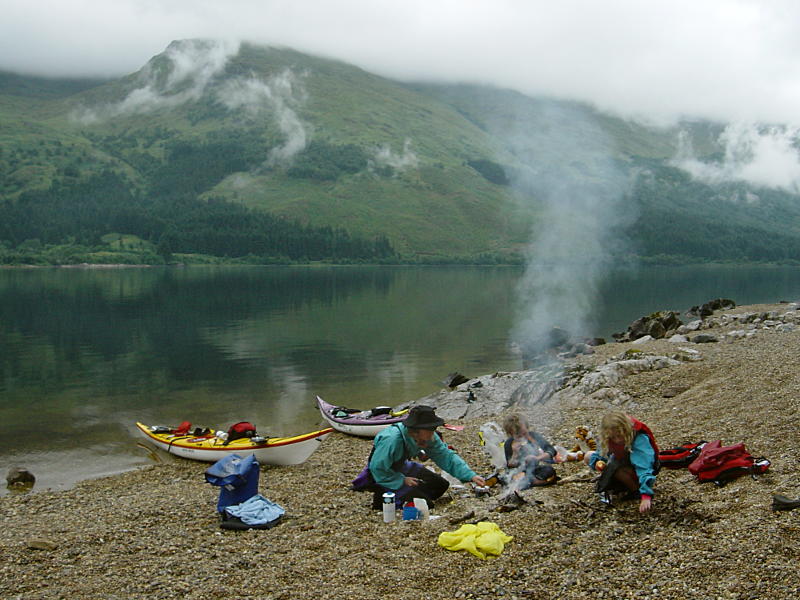 We looked for a camping spot on Eileanan Comhlach, a group of small islands just off Allt a’Ghiubhais, to try to be away from midges, but couldn’t see a good site. We continued on past Camas Grianach until, having travelled about ten miles on the first day, we found a spot on a shingle beach at the foot of Annat Burn. This stuck out from the NW shore of the loch enough to catch a bit of breeze. The fire was soon lit, dinner consumed and marshmallows toasted over the embers. There had been quite a few possible places to camp, rather than a single obvious spot as sometimes happens, so we found no evidence of the place having been used before (and hope we left no sign of our own visit). The second day dawned just as hot and windless, with the cloud perhaps even lower, as we breakfasted and packed up to continue SW down the Loch. We made quite quick progress for 4 km to the bend in the loch, where we paddled close in to Rubha na h-Airde behind which we stopped for a brief leg stretch. Another couple of klicks saw us at Eilean Fhianain, an island right in the middle just beyond a narrows. Here lies St. Finan’s Chapel and an old burial ground, so we had a brief look round. We weren’t planning on going any further down the loch, as it opens out into the coastal plain just beyond, with a road on the north shore at Dalelia. It would be easy to continue to a take-out and get to the main Arisaig road, but there would be a long shuttle !

Having circumnavigated the island, we returned via Eilean Camas Drollaman, then cut across to the south shore at Camas Bhalthain, which proved to be sheltered from the SW by a lot of forest and rather too midgey for a lunch stop. We paddled another kilometre to the outflow of the River Polloch and explored this for a kilometre or so until moored boats started to appear and we knew we were near the public road. We were entertained by a couple of mergansers diving and swimming in the clear water under the boats.

Back on the loch, it was getting less muggy and a bit of a breeze was picking up – unfortunately from the northeast and against us. The water got a little choppy at times, and we made sure we kept as a group and made reasonable speed by doing a bit of towing. We passed our previous night’s camping spot to get on and make the final day a little shorter. A brief look at a small island before choosing a camp at Seilag on the SE shore, another place which stuck out into the breeze a little.

Another nice beach, with a view up Loch Shiel to the next day’s finish

There were a number of small islands here, and we were curious to note that one seemed to be rocking backwards and forwards in the waves. As we set off, we paused for a look, and the “island” proved to be a large block of expanded polystyrene, covered in soil held on with chicken wire, and supporting a healthy bit of vegetation including heather and a small birch tree. A good nesting spot safe from land-based predators which is presumably why it had been put there, but it did seem a little incongruous. 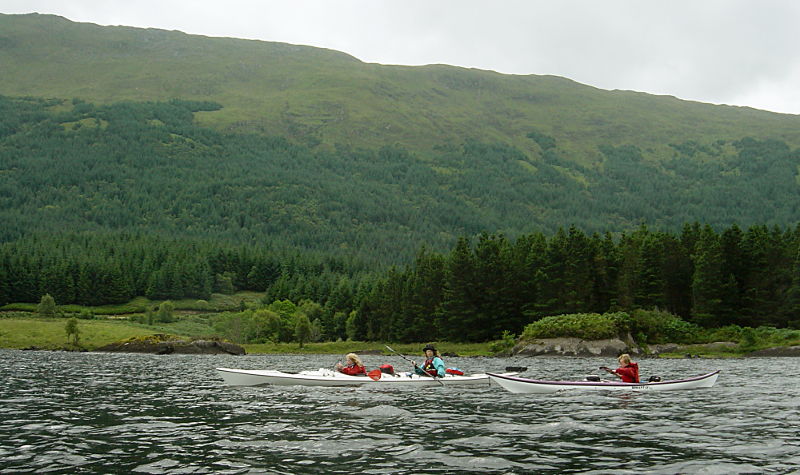 Setting off for the third day with a bit of personnel swapping – Michael in the Romany, Loch Shiel

Our final day was to be about eight miles and we wanted to make reasonable progress so we could pack up and relocate to Arisaig, so we set off at a fair pace, with some more towing to avoid tiring the kids too soon. This just gave them more energy to play around at our elevenses stop on a beach below Creag a’Bhlair. Another burst of progress took us to a small beach just a couple of kilometres from Glenfinnan, but tucked behind a small headland out of sight. It was then only a short paddle to the noise and bustle of civilisation and the car in the tourist car park. The last beach of the trip, Loch Shiel