A family outing to the alps, how delightful. Sarah wanted to take her playboat, but the rivers dictated that a river-running boat was going to be a must for some trips. If she gets to take two boats, then I want to too ! So we ended up in a car with six boats on the roof (balanced on specially-extended roof bars), towing a caravan with four bikes inside … eventually arriving in Argentière. We can’t say the week with Canoe Control was entirely a success, as we had rather anticipated that the four of us would paddle together. Having been split, one half of the family did not get the paddling they had hoped for and were really unhappy with the result. However, for our second week, we were on our own. 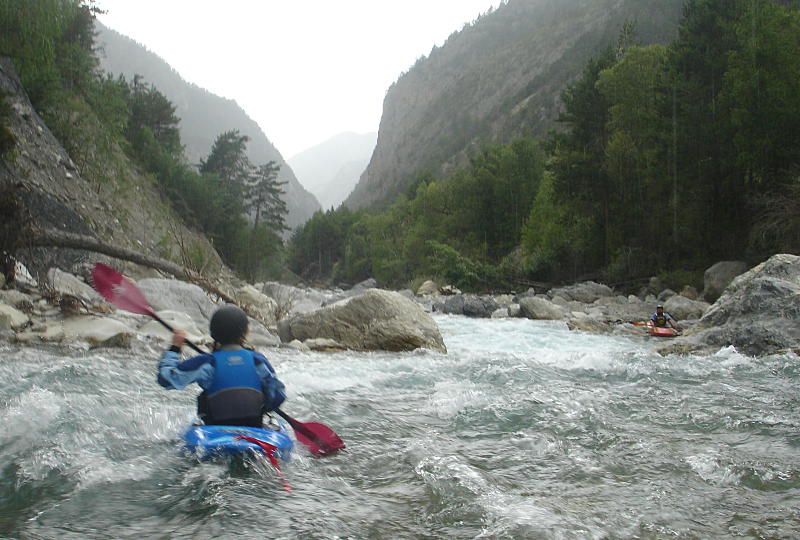 Sarah on the Middle Guil

The first morning, doing a bit of confidence-rebuilding at Argentière, followed by a short river trip in the afternoon, a voice suddenly called out “That’s Michael!”, and another SOC contingent materialised from the campsite. The West family had been going to Wales for their summer trip, right until they saw the weather forecast (about Thursday) at which point they replanned everything and drove to the alps where they had just arrived as we met them (Dave was definitely looking a bit blurred after the long drive). Since they had not brought boats, they obviously thought they would get away with not doing any paddling. Since we had a surfeit of boats, we couldn’t be doing with that, so a couple of days later we had everyone paddling on the lake, and soon got Dave into Andy’s H2 and onto the river at the top of the slalom course. The H2 is not a lot like Dave’s boat, so it was not entirely surprising to see him looking a bit nervous in it (this is quite big water with some big waves and eddylines). However, having survived that, we soon popped Alistair in Sarah’s GTS (having scrounged an extra spray deck from a random stranger on the campsite). Since the last time we’d been paddling with Alistair had been on the Keswick Greta on a wet and windy winter weekend, during which the river (already quite full) has risen a lot, giving rise to a minor epic, it was not entirely surprising to see him too, looking a bit nervous. Luckily, as I made another run down the slalom course, nobody saw me capsize, and unusually, this time I rolled up !

The Durance down from the slalom site is wide and fast, but not technical, so we were soon all looking a lot happier, with everyone making breakouts and splashing in the sun (how unlike the rather less child-friendly rivers at home in January!). A bit of tree-avoidance and a few waves soon saw us down to Roche de Rame rapid, a half-kilometre of steeper river with a lot of boulders, waves and plenty of play potential, but still a straightforward line, mostly down the middle, for those who wanted. There is a fun spot at the bottom of the rapid where a series of ferry glides, breaks-out, breaks-in and eddy hops means that a circuit can be paddled round until your arms drop off. At this level, the infamous mid-river pourover (nasty in high water) also makes a fun spot for practice boofing. The shuttle was followed by a barbecue and tales of trips past …

Linking up with a couple we’d paddled with earlier, and a large party of their friends, we found ourselves on the Lower Guil, paddling down this easy river with lots of playspots. This runs into the Durance, a much bigger river, which took us down to the St. Clément slalom site. At one point Michael misjudged a break-in and looked like being the next swimmer, but as the heroic brace was applied, the grin spread across his face until it reached his ears as the boat came back upright ! There was no getting him off the bottom surf wave at the slalom site after that. Paddling on down the sunshine run, there was also no way he or Sarah were going to miss out on the cliff spot worn smooth by hundreds of jumpers. One lad in the big group went for a seal launch, and avoided Stuart’s fate last year – there are some places not to boof if you ever want a family ! 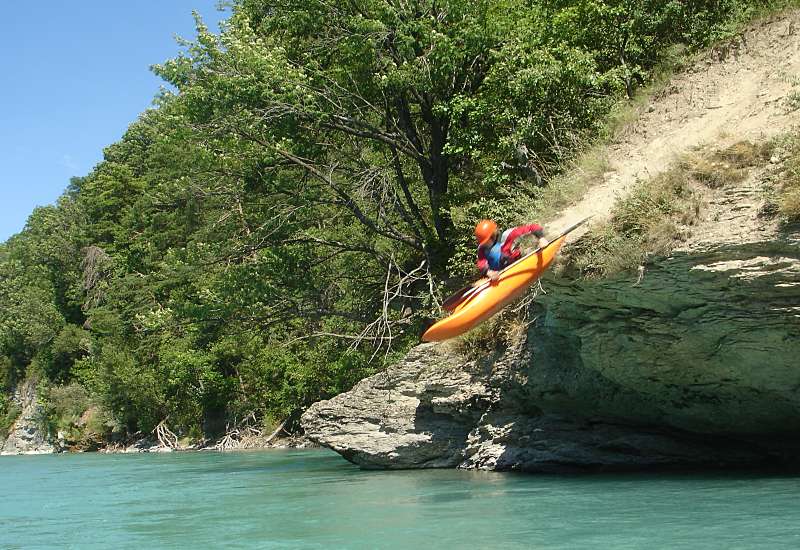 Getting the right angle for the big seal launch

At the Rabioux there were three options. Get out and walk; get out and inspect before running it, and run it blind. Sarah (and several others) hastily opted for the third option whilst Andy rushed down to video the result. The group ran on the left through the biggest hole close to the rocks. Seeing a two-metre wall of foam ahead caused Sarah to blink – just enough to end upside down. But then the paddle tapped its way along the rocks until it reached the eddy, at which point she rolled up and broke out all in one smooth motion.

Mary and Michael walked, so Andy went back to put on and run it on the right. Almost missing the boof, I teetered on the foam pile of the stopper for a moment, feeling the boat being sucked left towards the boat-eating hole, but a couple of swift paddle strokes pulled me clear to a cheer from the crowd.

With the sunny Durance behind them, I’m sure we’ll be seeing Sarah, Michael and Alistair on more trips this autumn, but I wonder how long Dave can resist the allure of a new boat ?