Easter, with two bank holidays, has always been a good time for longer sea trips, but it’s early enough in the year that the weather is not always wonderful in Scotland. In 2009, an Easter trip circumnavigating the Isle of Wight provided a southern alternative, but was sufficiently hard that the participants vowed never to do it again. However, with characteristically short memories, an elite trip for a limited number of people (the possible camping spots are very restricted, and a larger group is difficult to keep moving fast enough) was planned once again, avoiding the “misery” of a weekend up north.

Those who didn’t fancy the trip south, or who were too late to join, planned a trip to Scotland anyway. As the forecast materialised and the trip south was blown away on the winds of the English channel, the Scottish trip was advertised to those who were expected to be all packed up and raring to go, but we got no takers.

Thus three of us (Richard, Mary and Andy) met at the Corran Ferry to cross to Ardgour early on Good Friday in bright sunshine with little or no wind. We rapidly found a place to put-on, unloaded and packed up the boats and did a short shuttle north to the southern shore of Loch Sunart, where the minor road led to a small beach with enough parking space not to get in anyone’s way. This gave us a fairly ambitious minimum of 95 km to paddle round the shores of Morvern in the three and a half days.

The tide was with us down Loch Linnhe, and we were soon passing the unusual beacon on Sallachan Point. Richard and Mary stopped to talk to a fishing boat, while Andy nipped to shore to adjust his footwear which didn’t quite fit in the boat. This proved to be a bad idea as the bay was in an eddy, and it was something of a struggle to paddle back out against the flow to catch the others who were still having a relaxed paddle with tidal assistance.

The A-road turns inland at Inversanda, leaving us with quite an isolated stretch of coastline where we had camped on a previous trip in much windier conditions. On that occasion we had pretty much surfed the fifteen miles to Mull, but today the benign conditions continued as Andy detoured to get geograph photos of some of the skerries just offshore. From Sgeir nan Gillean we cut in across Camas Chil Mhalieu to pause for lunch on a beach below the beetling cliffs of Druim na Maodalaich.

With very little traffic, the minor road to Kingairloch was almost invisible and soon disappeared entirely as we reached and crossed the mouth of Loch a’Choire. From this point on the coast is only approachable by boat, and we would not encounter a shore with a road for another fifteen miles. However, the shore certainly is approached by some extremely big boats, as the Glen Sanda super-quarry up on the hillside was discharging its product on noisy and dusty conveyor belts directly into a 100,000 ton bulk carrier registered in Nassau.

We were past this and back into peace and quiet surprisingly quickly, passing small headlands and shallow bays with wooded hillsides. There was no sign of life at Eignaig – an isolated house in a bay reached only by sea or by 10km of rough track from Lochaline over the hills.

Richard had a specific bay in mind for our evening’s camp, but we were not entirely sure how to identify this, and as the day grew longer and wearier, and the tide no longer helped, we began to wonder if we had somehow missed it. Rounding Rubha a’Mhothair, a small headland, we had a view forward of almost continuous rocky shore to the southern tip of the peninsula. A small beach presented itself, at the foot of the wooded defile of Allt an Dhoire Dharaich, and a quick inspection suggested that there was enough of a grassy platform for this to be a good place to stop paddling. 35 km for a first day, early in the season certainly seemed more than we had expected to do – so much so that a campfire never materialised and we retreated to bed disappointingly early.

Cloud late yesterday and overnight meant that the cool evening had not been followed by a particularly cold night. Saturday dawned a bit grey with the occasionally drizzly spot of rain, but still a calm sea and no wind. Back on the water, it was only a couple of kilometres until we rounded Rubha an Ridire into the Sound of Mull. We weren’t expecting much tide here (the ebb had just started and would be against us for hours, but is usually very weak close inshore), but a strong flow against us between the headland and the island of Eilean Rubha an Ridire almost brought us to a halt. Crossing the narrow sound to the north shore of the island we were soon free of this and able to paddle across Inninmore Bay towards the wooded cliffs of Aoineadh Beag and then on to Ardtornish Point with its ruined castle and small lighthouse. 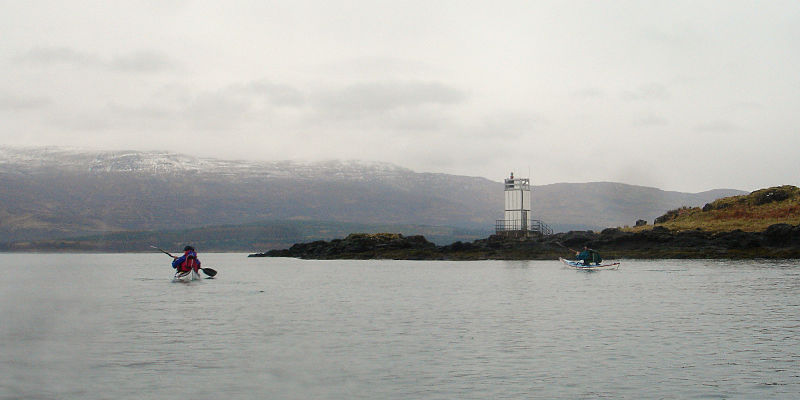 Rounding Ardtornish, we could see Lochaline ahead, and crossing the narrow entrance to the loch whilst the ferry was away on the Mull side of the Sound, we landed on a sandy beach to wander up to the Lochaline Hotel for elevenses and a bit of a warm up, as it had by now become quite cool. A small coaster on the quayside was noisily being loaded with a cargo of logs as we set off to continue northeast up the Sound of Mull. Although a minor road follows this shore, it is a short way inland and the coast is very quiet. Over the next few miles we saw several otters – who are usually more active at dawn and dusk, but are often out during the day if it is dull and overcast.

12 km on and a lunch stop was called for on a rather muddy little beach, but trees at the back kept us out of the freshening breeze and we were now pretty much halfway round Morvern. This was good, as the weather forecast was suggesting that Monday could be a bit rough, so we were planning on finishing by Sunday evening if we could. Another few kilometres on and the road comes to an end, giving us back wild coast as we came opposite Tobermory on Mull. Soon we spied other paddlers coming towards us, and this turned out to be someone Mary and Andy knew from a week in Shetland last year, which made a pleasant surprise.

The gap between Mull and Ardnamurchan Head opened to our left, and this allowed a slight swell to reach us as we headed up and round Auliston Point, into the mouth of Loch Sunart. By now we were keen to find a campsite, but the pair we had met had suggested that Loch na Droma Buidhe had some good spots, and the coast we were now paddling past was steep and exposed, so we continued until we could pass through the narrow gap at Ceann Garbh between Oronsay and the mainland. Inlets on the north looked to dry out rather a lot, which would give us a long way to carry boats above the high tide. A beach on the south side looked better and we soon landed here and got a brew going – much needed as we had managed over 37 km on our second day with no tide to help !

The shortest route now depended on getting to the eastern end of the Loch close to high tide, as a channel just allows small boats through, which would save us paddling back west and all the way round Oronsay. We were on the water in plenty of time, in bright sunshine and a mirror-calm sea. 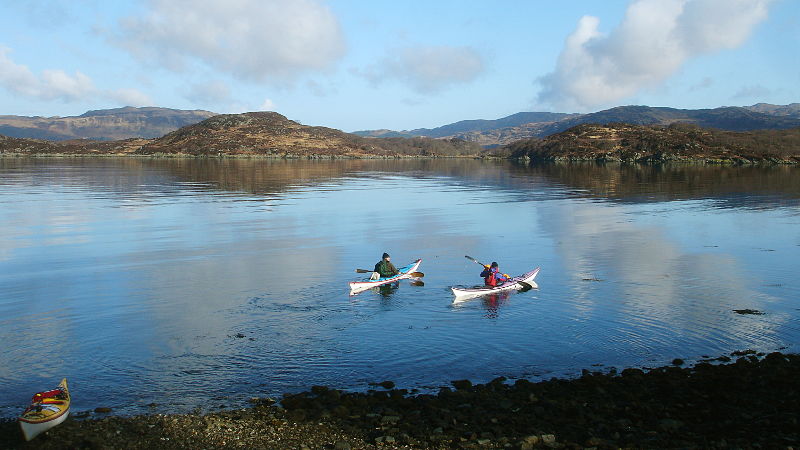 We threaded our way through the shallows, then turned to pass east of Eilean nan Eildan, site of our first night’s camp on a rainy Mayday weekend in 2003. Skerries here are a favourite haul-out for seals who find the hunting in the narrow channels either side of Carna is good when the tide is running. Rounding the southern tip of Carna, the tide was not yet running through Caol Charna, and we were easily able to paddle to the wider expanses of Loch Sunart itself, where the ebb tide would not be strong as we paddled against it.

Loch Sunart is much occupied by fish farms, mostly along this southern side where we were paddling, but tucking inshore of these kept us away from the considerable traffic of small boats in the Loch itself. Fluffy clouds and long sunny intervals made for great light highlighting snow on the tops of the hills to the north and east. A succession of small headlands hid the eventual turning point of the Loch until we were quite close, then, passing the rocky spit of Rubha Aird Earnaich, a new vista opened up ahead towards the narrows through which the ebb tide was now flowing fast against us. After passing a few islands dotted with Scots Pines, we paused for lunch to fortify ourselves against this final challenge. 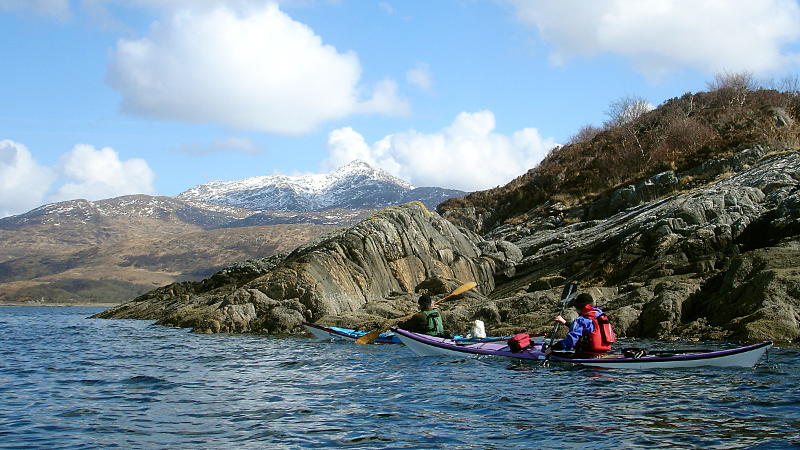 Andy scrambled around taking photos, and managed to cut his finger moving a vicious bit of grass out of his view. Back on the water, he hoped the traces of blood he was dripping into the water wouldn’t attract any sharks ! Keeping close to the south shore, we were out of the fastest flowing stream, but had to move out as the water got too shallow. A few minutes of hard paddling saw us into a wider bit of the Loch and deeper water, just in time to be pelted by a brief hail shower. The sun was soon out again, and only a kilometre or so remained before the car hove into view and we were off the water very early afternoon after a short day of only 22 km.