Five weeks after the last trip here, it was the Lune on the programme again and perhaps we’d have gone for a different river so soon after. But another dry week meant that not much else was likely to go, except possibly the Kent as a final fallback. As it turned out, the Lune was a little higher than last time (0.41m at Killington) and whilst this made no perceptible change for the shallow and wide bits, it was enough to make a significant difference in the narrower passages. This time, Andy, Pete and Ann met up at Bowes, whilst Doug and Gail, Stuart, Richard and Terry had all made their way from different directions. Water temperature was still cold, but at least today was sunny and the air temperature a bit more like spring.

The initial scrape went quickly enough, and soon we were having fun in the gorge. Lots of narrow frothy channels, boulders to avoid, and tight breakouts to make. Some of these were made harder by paddling directly into the sun, making obstacles harder to spot. We were surprised to notice that the jumping bridge had had its girders repainted during the last five weeks. A little more water meant a slightly less intricate run-in to Crowders Leaps, but Pete got almost exactly the same line as Gail last time, giving him a cold wake-up call and just enough room to roll up. Doug chose to avoid the V-notch and boofed from the right, which seemed to work very nicely, so Ann and I followed suit. Gail portaged this time, and we had no more incidents. 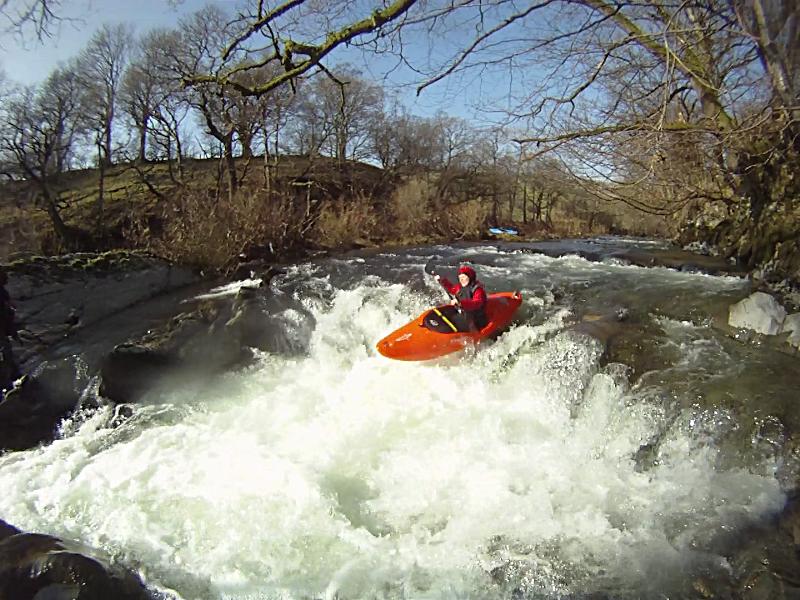 Boofing off the right-hand rock over the aerated pool

Down to the Strid and all out for a look. To our great surprise, the tree stump has vanished and at this level, it looks as though it might just go. Terry gives it a try, and seems to make a neat controlled run, so I set off. Down the first little drop, which is unexpectedly narrow, then I realise I haven’t turned the video helmetcam on. Frantic attempts to make too-small breakouts results in a severe wobble, no chance to turn the camera on, and I’m now heading into the key section backwards. Some very frantic paddling got me turned round and lined up tight to the right wall, where the water is slower, so approaching the drop, doing this slowly and making the very sharp right turn in the aerated water all works better than I had hoped for moments earlier.

Doug and Ann now set off, but Doug came in too fast, giving him no chance to get over to the right, slow down and line up. The bow hits the rock and the stern swings rapidly round to river left. Down the even narrower slot backwards, and soon upside down. Stuart on the rocks grabs a buoyancy aid strap and yanks Doug upwards, exit the boat and an easy swim to the eddy river right. Ann is already putting on and sees none of this. The approach looks good and she gets nicely over to the right, slows right down and makes the drop. Bow close to the left wall, but a steering stroke gets her lined up for the last bit before Stuart can grab the bow to help and looks good through the last narrow constriction. 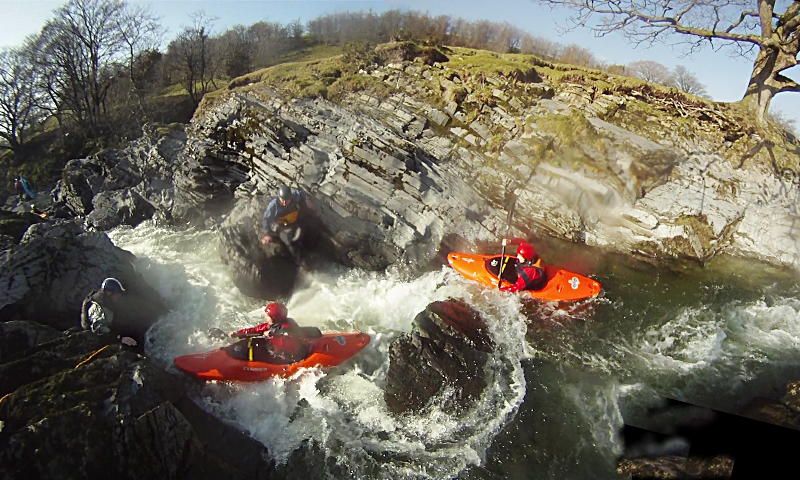 Ann lining up, and making the turn in the flow

Annoyed about failing to turn on the video, I set off to portage back upstream, meeting Pete and Stuart who have now decided to give it a miss (Richard and Gail have already portaged down). I am soon back in the boat and realise that the video has been running since watching Ann’s run, so no chance of failing to have it on this time. It’s inevitably easier second go, and I break out in the minimal slack water river right above the key drop. Hmm, now facing upstream again, with not a lot of room to turn, but this goes easier than expected and it’s very simple to sidle slowly towards the drop. A slight boof and a quick stroke to make the sharp right turn and off we go – a second successful run, and this time its a wrap. 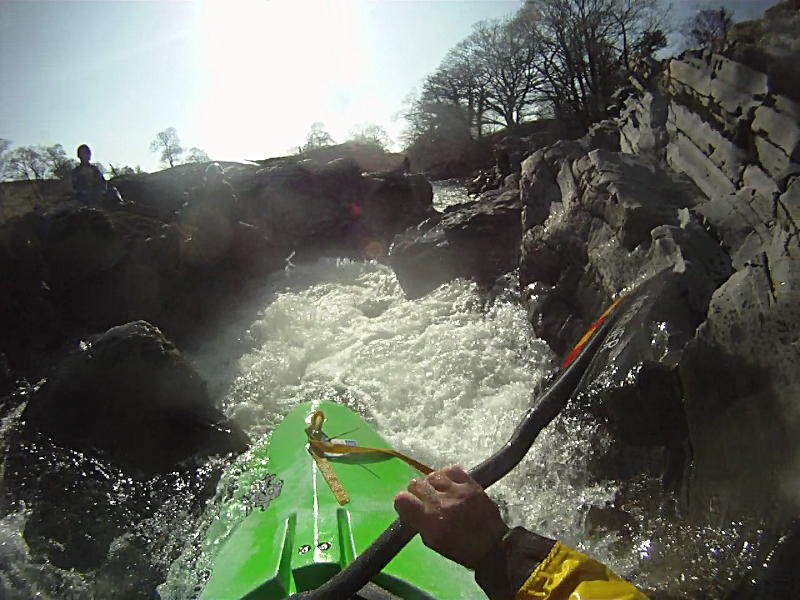 Hands-free photography – the tight drop in the Strid, 2nd go 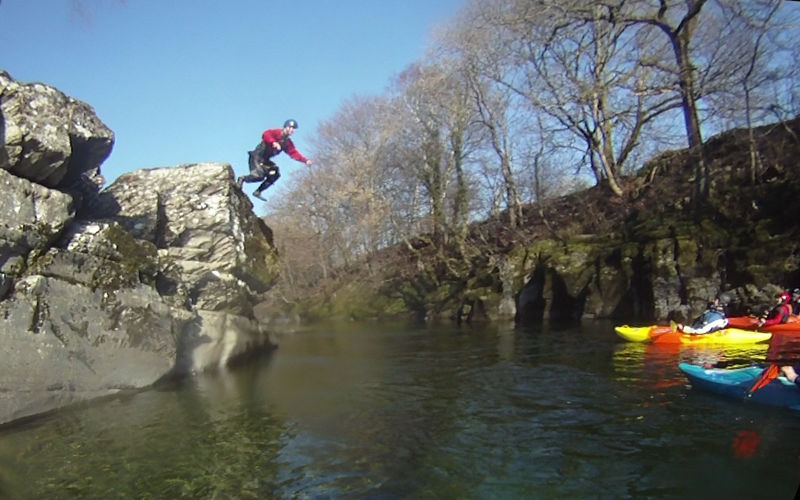 More gorge, and a few entertaining alternative channels, and once again we are soon at the take-out, pausing only for a bit of jumping from a high rock river right, encouraged by the sunshine and warmer air this time. Maybe next time we’ll catch it at a nice level again – we had 0.65m on the last day of the Boldron Paddlefest back at the end of October, which worked really well.