After a successful five days of paddling in 2010, we decided to invite a load of friends up to paddle with us again this year – but over New Year this time (as we were away, paddling of course, over October half term). Friends include many SOC paddlers, as well as several from farther afield, so we had some big groups on the river and needed to split up most days to be able to fit into the eddies ! The advantage of New Year was that lots of people were available to paddle, but the disadvantage was that it was very cold.

30th December, River Lune, Crook of Lune to Killington New Bridge. Despite some communications difficulties resulting in one member being cut off from the rest of the world who knew where we were going, we still managed to arrive at the put-in with nine people, and a bit of frantic texting located another at the take-out, and shuttled back to join the group. The level was better than on some of the trips earlier in the year, about 0.7m at the Killington gauge. This meant that the flatter sections went fairly quickly with no knuckle-mashing struggles over shingle banks. 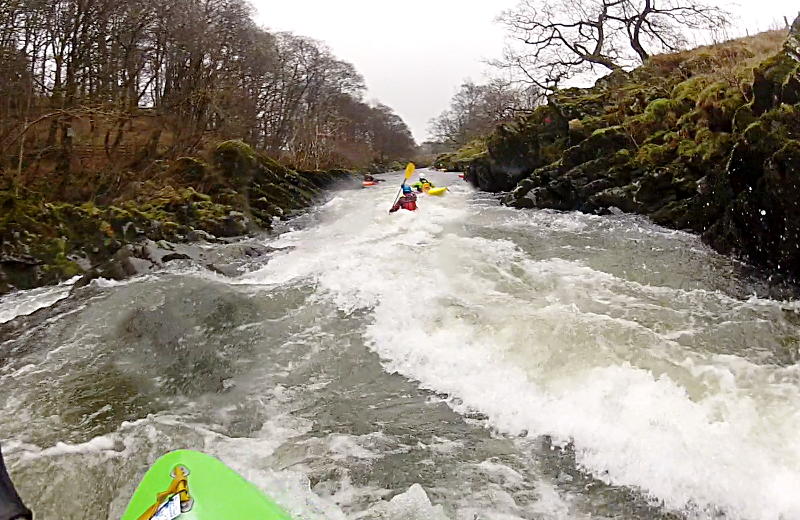 Paddling down Howgill Loups, one of the shallow gorge sections

The gorges were at an easy level – not too tight, but not fast and boily, either, so we soon arrived at Crowders Leaps, which is no more than a bouncy rapid at this level, though fast. Under Lincoln’s Inn bridge and quickly down to the Strid, which provided a few rolls, but no swims. 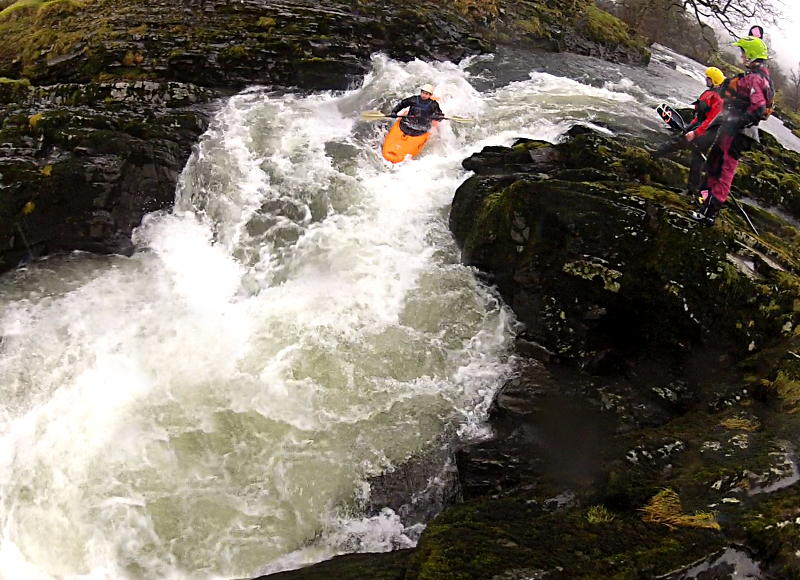 Dave Peel on the Strid

Being near base, we had an unhurried and well-organised shuttle, putting most cars at Winston Bridge, then putting on at the old mill picnic area, river right above the county bridge. The river looked distinctly crowded with no less than eighteen of us, so we split into two groups. Abbey was looking fairly intimidating, so a few folk walked round – wisely, I think, as the big stopper at the bottom chewed up and spat out several victims, most of them swimming.

Whorlton offered a choice of a sneak down the right (almost a seal launch) or a fast ride keeping hard left through big stoppers to reach the drop-off at the end. The Grafts Farm playwave/stoppers were also meaty and claimed the odd victim, but after that, the big slides and ledge drops at the end went almost without incident. Overall, a very fast trip despite the size of the group.

With almost everyone driving over to Weardale from Boldron we thought the shuttle would be well sorted, but at the take-out found that everyone had driven on past and not left a car at the bottom. At the top, some decided not to paddle, some wanted to do the top waterfall, whilst others preferred to put-on at Wearhead. The latter group thought the shuttle had been sorted so that those putting on lower down would shift a car to the end, whilst those doing the waterfall would not get involved, but this turned out not to be the case. A bit of a communications/organisational cock-up really, so some of us (having timed things to put-on just as the shuttle was being completed) got rather cold before the upper group of eight arrived, bringing the total number to fifteen. We then sensibly split into two parties, but it turned out that everyone who had done the trip recently was in the first group leaving the second short of one or two critical bits of knowledge (but realising this too late to catch up). The trip went surprisingly well considering all this ! 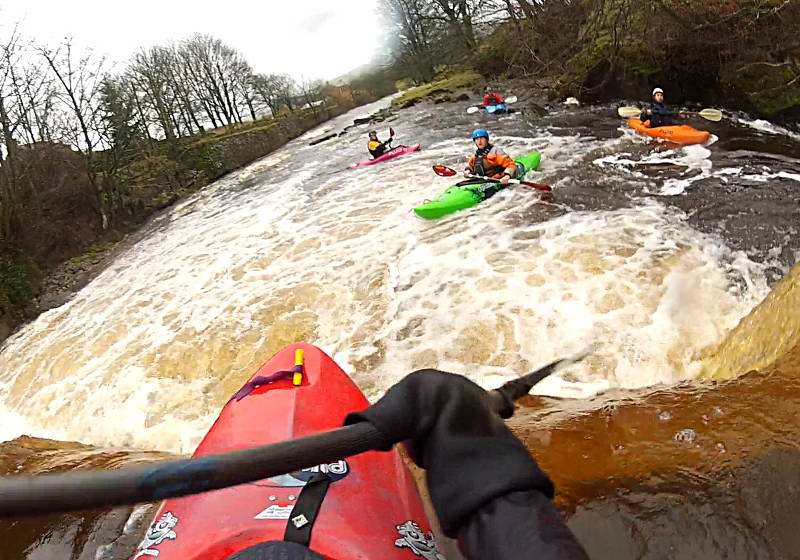 Dropping over the final ledge on the West Blackdene rapid

Apart from the top waterfall on Killhope Burn, the first excitement is at West Blackdene, with a complex ledge drop which needs a bit of careful routefinding when low, but was fairly straightforward today. Ireshopeburn Ford provided the odd bit of rolling practice and there are innumerable bouncy rapids, stoppers and fun ledge drops on the way. The two weirs at Eastgate have now been removed (one of them very recently), so the river was somewhat different here. The last railway bridge is a marker for the Stanhope gauging weir, which those in the know took without incident down the right chute. The second group didn’t fare so well, and one ran down the centre and signalled “pile down”, which soon proved to be a bad idea – the very fast water in the gorge down to the road bridge is not the most fun place to swim… 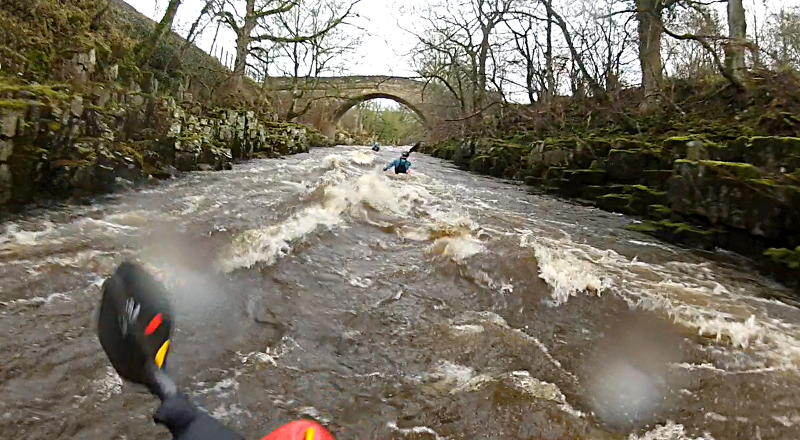 Bouncy fast water in the gorge down to Stanhope bridge

With lots of folk wanting to finish reasonably early and head off down the M6, the initial plan had been for something in the Lakes, but with a big Leeds-based contingent, and a certain lack of water in the west, we replanned for something a lot more local. We were also almost down to a sensible group size, twelve, again split into two parties.The Tees certainly had enough that the Racing Stretch was worth doing all the way from Middleton, so we put on to the bottom of Hudeshope Burn, upstream river left from the Middleton bridge. There are still a few shallow spots, but generally we travelled quickly, with only a minor near-miss on the big corner wave (there’s a vicious hole here at high levels, but merely a good surfing spot today).

Beyond Egglestone bridge, things speeded up, but the chutes, ledges and stoppers were not giving anyone any trouble. Then Andy set off to run the long rapid on a left bend, hoping to get an eddy on the outside to take video. Catching an edge, he missed this, got across the current and capsized, finding a lively rock/helmet interaction below water. Unusually, hanging in for eight seconds, he then surprised everyone by rolling up ! Unfortunately, the video camera had been smashed off the helmet by said rocky interaction and was now dangling by its safety leash, right at eye level. Unable to see that he was right on an eddy line, the river gods found him easy prey to a second capsize… The water was extremely cold !

Woden Croft, by contrast, usually the place for upsets, went well for everyone, and we were soon at the take-out at Cotherstone, marking the end of another successful Paddlefest, this time with at least fifty five person-river-trips over four days. Thanks to Dave, James, Ellie, James, Marie, Mark, Clive, Ann, Mary, Sarah, Michael, Doug, Rosie, Nicky, Nikki, Lizzie, Carwyn, Jim, Iggy, Nigel and several more !