I’ve got a big backlog of video to edit and put up, but at least I’m making a bit of progress at the moment. First up, Swaledale Outdoor Club’s publicity officer, Sarah Bridge, was after short clips for part of a club publicity video. With 250 hours or so of raw footage to sift through (even though it’s all indexed, so I know what not to look at…) it’s taken longer than it would to prepare footage for a single-trip video. I managed to get a sea kayaking trip to the Farnes down to 27 seconds, but that’s not really worth watching on it’s own (I’ll try to do a slightly longer and more watchable version later), but the remit to produce 20 seconds of whitewater on ‘local’ rivers has resulted in a draft of just over two minutes. Some of these clips will hopefully make it into the final club video, and a later version will probably make up into a similar type of ‘what the club offers’ video for just Canoe Section (still needs more work) but, for what it’s worth, here’s the draft so far …

Meanwhile, watch this space as I’m in the final throes of doing several videos – I’ll add links to the posts as they are added. First, Whitsundale Beck April 14th 2013; then Oughtershaw Beck, May 18th with the Upper Wharfe; still to come, the River Garry from our Scottish Easter trip (no titles, not sure about the music…) and an Etive video from our November Glenmore Lodge trip (definitely needs different music, tighter cutting, and a few more clips so it doesn’t look as though Mary was the only competent paddler, which is how is has been edited so far:). As always, the reports go under the dates of the trips concerned. There’s still more footage from two or three Scottish trips, a “ditches” compilation and possibly some older (720×576 TV resolution) videos that need to see the light of day (particularly the Lofoten footage). Lots of catching up ! I also have video of 24 river trips from our summer trip to Austria (this includes multiple runs on several sections, so won’t be 24 videos) which is taking up 400 Gb of my hard disc !

Meanwhile, I’ve also been working on a title logo. Need a bit of movement (which might need some new software), but the sort of thing I’ve been thinking of is along these lines… 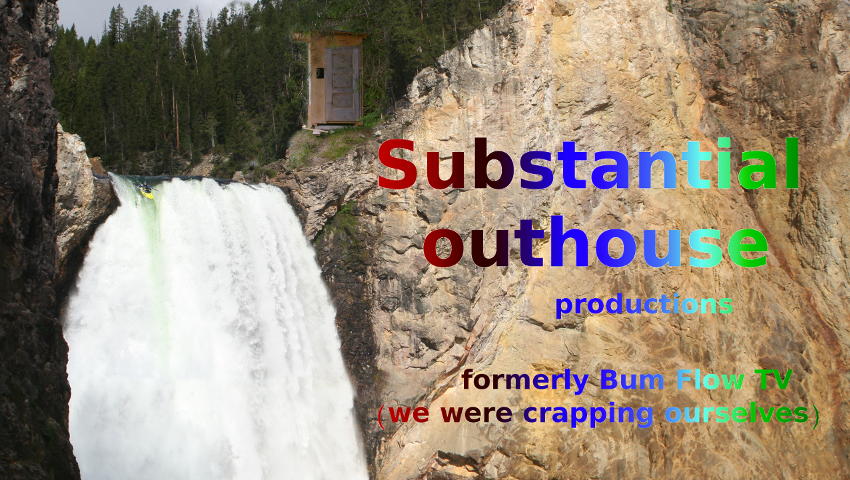 I’m sure Tony Hammock would indeed have been crapping himself had he taken to breaking US law by paddling over the 600′ Yellowstone Falls, but in fact, he was merely dropping Low Force, whilst the outhouse isn’t that substantial – it was by the Lech on a recent paddling trip to Austria (and is actually a hide for watching birds, I think). But it’s more of a sketch for an idea than a finished logo…

With the weather promised very wet, we’d decided it would be a good opportunity to head south to Wharfedale in the hope of catching the Upper Wharfe at a good level. Crossing the Greta at Rutherford bridge, we saw a large group looking a little unsure about getting on, and the weir looked to be above 1 metre, which is chunky. We later learned the group had paddled, and had a fast trip, as the level came up to 1.2m and more. The Ure at Aysgarth, however, didn’t look that high, but we knew it would be on it’s way up, so continued up Bishopdale and over the top into Langstrothdale.

The Wharfe didn’t look that high yet, but we assumed it would be rising and popped in for a look at the confluence. Greenfield Beck hadn’t yet come up enough to paddle (it’s got quite a long catchment, much of it afforested), but Oughtershaw looked to be at a good level. I’d only seen this paddleable once before, on a Wednesday evening trip with John Wootton just over a year ago, when we really didn’t have enough daylight to head up there, so this would be a first time for all of us. We knew there was at least one tree down, which allegedly came up on you quite fast, so we took it fairly cautiously and didn’t get too close together in case there weren’t enough eddies. There wasn’t much warning of the first livestock fence, but it sagged enough that we could just paddle over it – with a bit more water you wouldn’t even see it. The second one was easier to spot, but a definite portage, and most of us got out river left well above it. It was only a couple of rapids on before we came to a narrow little gorge with the fallen tree across it. You could possibly sneak under this – certainly as it starts to rot and the side branches get broken off in a few years, but for now, it too is a sensible place to walk.

Since we were out, we reccied downstream, to find another narrow section, leading to an awkward drop, with a slot in the middle, and a big undercut river right in the run-out. Dave and Michael quickly decided to portage, while Ben and Charles ummed and aahed whilst setting up some safety river left. Anthony ran the drop on the right hand side, hitting the eddy left, well away from the undercut. I set out to stay on the shelf left of the slot and boof. I didn’t quite give it enough vector left, and hit the edge of the slot, but a brace kept me upright and away from any potential nasties. The throwline crew decided to walk…

Back on, it’s easy for a while and the valley opens out, so we could see we were nearly down to Beckermonds. Another narrowing was menaced by overhanging branches on the left, but a bit of effort to stay right cleared them fairly easily, and the run on down to the confluence was straightforward – once I’d tried to blink my lens back in place and finally had to reinsert it in an eddy….

By now, Oughtershaw was starting to drop off, but Greenfield Beck had come right up – higher than when we’d run it back in December 2011 (as seen in the previous video). This meant that the Wharfe was still at a decent level, though far from massive. We headed down this quite fast, not needing to scout, so Mary, who had decided not to paddle, but was trying to grab bank footage, struggled to get from one vantage point to the next in time. With no incidents, we were soon at Hubberholme and the take-out. The way back revealed that the Ure was now huge, and the Greta still looked pretty big, too.