After last year’s very successful three-or-more-day trip (various people went up early) a number were keen to return in 2013, either to repeat their success or to do the bits of the Moriston they skulked round last time. There was a drought in Scotland (surely not still the same one we ensured at Easter?) but, of course, the Wet West copes with this by having dam releases on both days. The result was a very pleasant sunny day on the Moriston, with lots of water. We weren’t all staying at the same place this time, so arrived at different times (and there was some confusion over where we were going – we turned into the Gun Club, only to find that this year it was a shooting venue, not a paddling one…) The result was that Andy and Mary paddled with Nicky and Rosie and others, whilst Sarah and Michael paddled with Dave, Anthony & co.

The run proved to be very crowded, and the eddy before the top drop, in particular, was a traffic jam of epic proportions, making it effectively impossible to leave the eddy at the upstream end, which is the best place to get a good line down the left hand side. The result was that we all got a suboptimal line. Mary had a bit of a swim, I took three goes to roll up (and had a broken paddle blade, yet again), but Sarah did at least keep her deck intact this time. After the first drop, I managed to get cut up on another small drop, resulting in another roll (first time, this time). It was starting to seem more like a boater cross event… 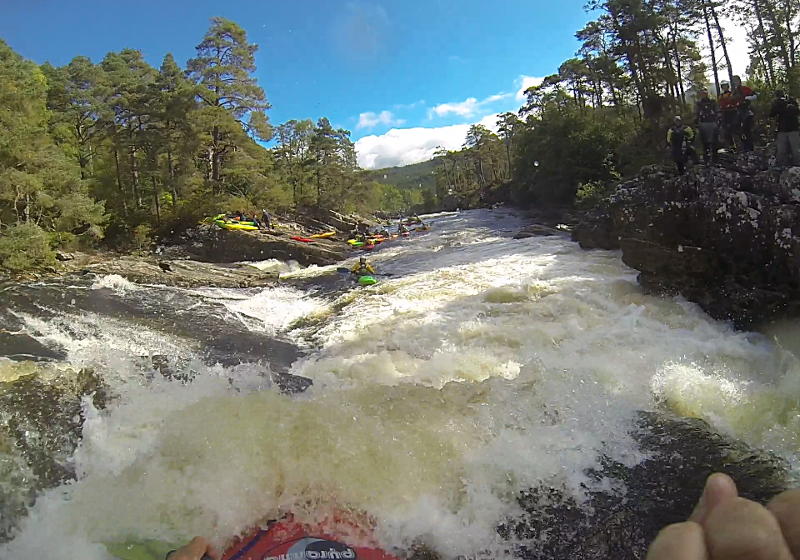 But on the biggish drop where I’d had to roll last year, I got exactly the line I wanted, landing with the bow up and pleased with myself. We then hopped out for a quick inspection of the most difficult rapid. When I came back, I found an SCA official trying to drag my boat away, as he seemed to think it was one that had been pinned and dragged to the side, rather than just parked awaiting my re-entry ! Fortunately, he hadn’t carried it too far. I got a better line on the rapid than last year, right down to the end, where I relaxed a little early and neither committed to the eddy, nor to paddling straight on down. This took me far right, into a cushion wave, and paddling off that, I found the Boater-Cross situation again, as my line was interrupted by someone who had set off allowing what he had no doubt thought was an adequate gap… I hit the wave too slow, and had yet another roll, but this time even swifter back up. Mary, on the other hand, had failed to roll up at the same spot, owing to there being another kayaker parked on top of her upside-down boat in the stopper. We’re planning a return match on a less crowded occasion! 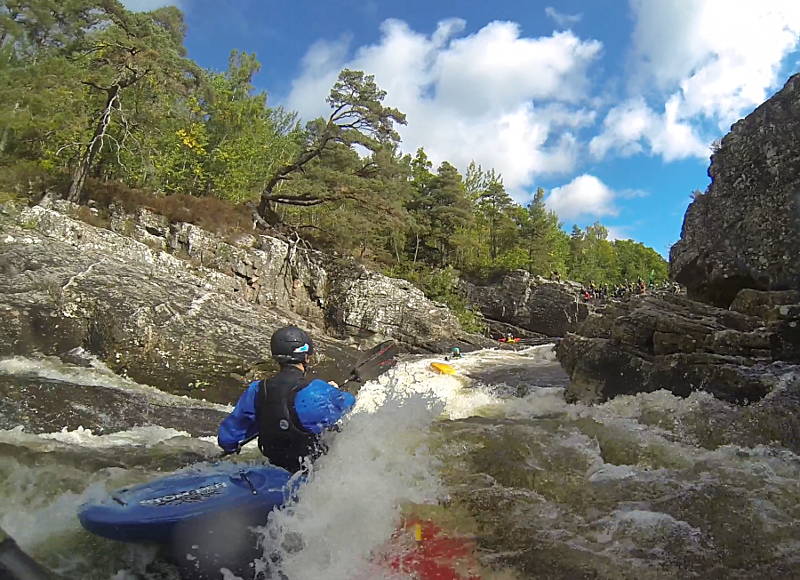 The remarkably fabulous weather also made for some good photography – here looking back up that final stretch. The yellow boat near the centre of the photo is about where I was where the previous photo was taken. 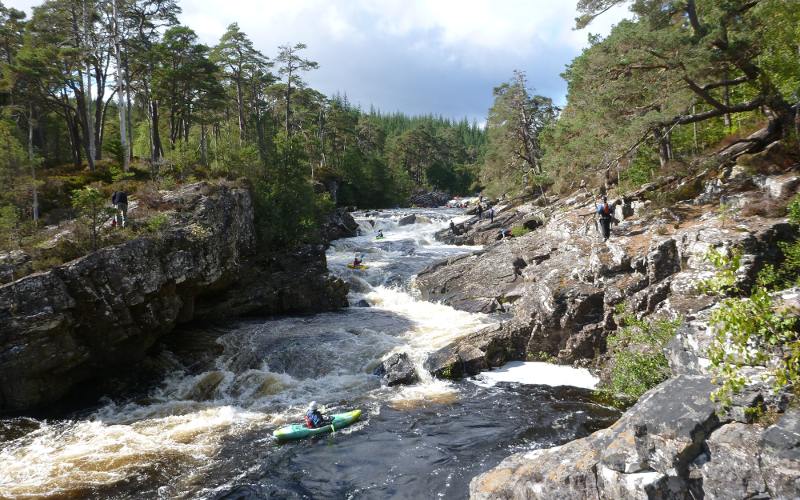 The Saturday night party was perhaps a little dull (the dress theme of “Old School” didn’t seem to have meant anything to most people, so everyone was looking very conventional), but was followed by rain of the sort that you really do have to visit Fort William to experience. Needless to say, harder paddlers spread themselves across Scotland grabbing descents of rivers that need this style of climatic excess, while the more mortal of us looked for something easy that might not be too scary. We thus found ourselves looking at the Loy, which is mostly graded three and had been a shade on the low side last time we did it. Today, however, it was epic – huge river-wide boat-eating stoppers abounded, often just upstream of large overhanging branches just clear (or not) of the water. Eddies were well into the trees. We drove some way up the valley, not so much because it was hard to find a turning space as that we had a morbid interest in seeing one water fall which had been too low to run last time but now had true “Bomb Flow” character.

Dave Peel and others ran the Arkaig – the flood being buffered by a large loch, meant that, just as it stays high for some time after rain, it also stays tolerably low as nearby mountains wash away… The sun even came out briefly whilst I was taking the dog for a walk and getting a few odd geograph squares by the river.. Sarah had a look at the last drop on the Chi-Aig (a thoroughly epic run higher up) which she’d video’d various people almost seal launching off earlier in the year. This was truly brown and stout – most impressive, but definitely not a venue for boating in those conditions !