The freshly laminated hunks of wood from yesterday have seen some sawing, planing and belt-sanding, to get them looking roughly as the design intended, though there is still a bit of work before they can be put into place on the strongback. However, getting this far was easier than I’d expected, and quite a bit of what has to be done will not be possible until strips are in place. 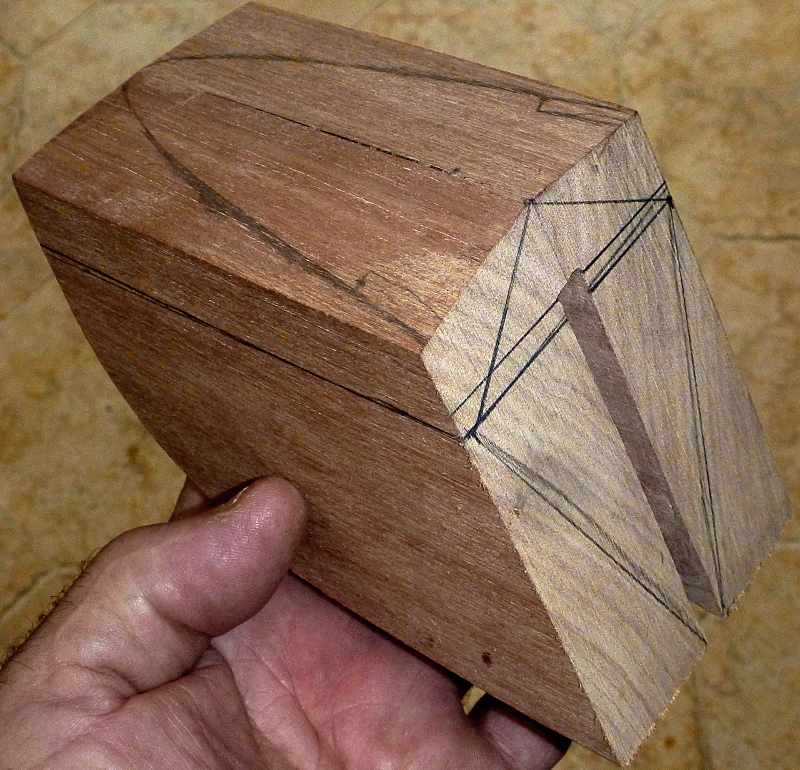 The lower bow piece is still not quite the right shape – there is a thin lamination (probably American White Ash) to apply to both the upper and lower edges, and at the moment, that wouldn’t quite clear the upper bow piece – there needs to be a clear gap, both to look right and to stand any chance of glassing the bow properly. The lower part also needs tapering quite a bit more, but this will wait until after stripping. The upper edge needs a bit of rounding over, which will be done after the ash is laminated in place and before stripping, since sanding this shape will be a lot easier without the upper bow piece in the way ! The upper bow piece needs a rebate for the strips to be glued into, and the critical flared shape needs more sanding – currently it’s convex, which needs to change. The main aim of getting this far (before the forms are set up on the strongback) is to reassure myself that I am on the right track. Need to do the same thing with the stern next. 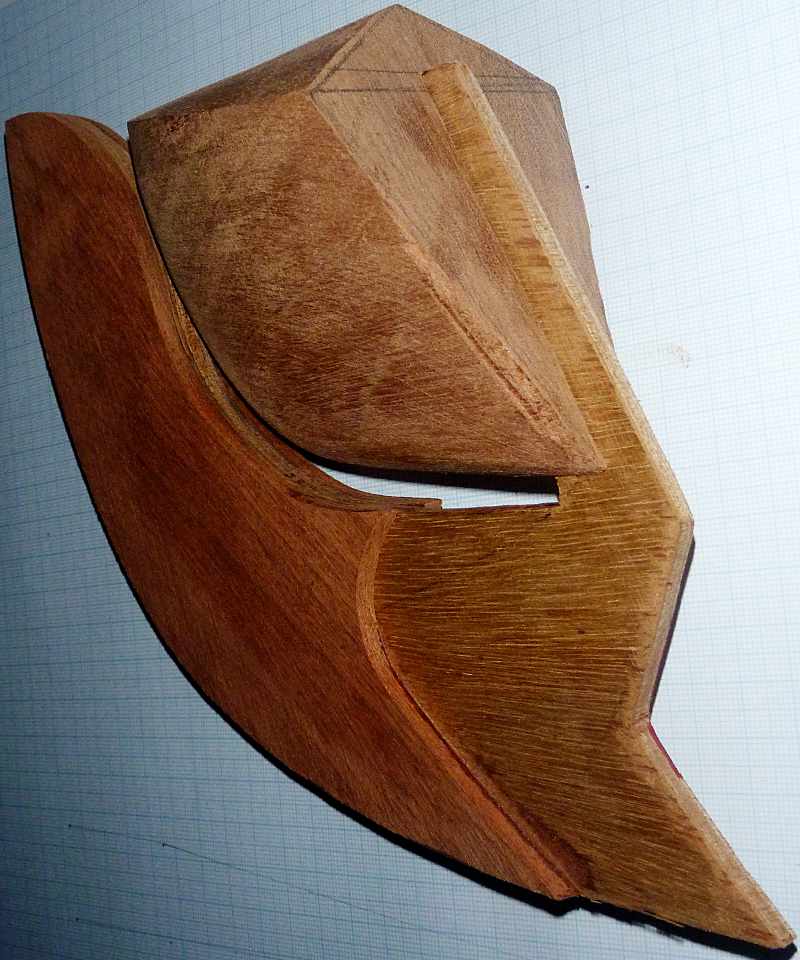 Another view of the bow assembly

It is twelve years since I finished building Geyrfugl, and soon after that project, I started work on a project of my own design, which I called Borealis (the name of the design, not of the boat I intended to build to that design). Inspired by reading George Dyson’s book “Baidarka”, and by Rob Macks’ elegant North Star design, I wanted to build my own hardshell interpretation of the Aleut Baidarka, a boat evolved in the open north Pacific Ocean. The name is Russian (the Aleut word is Iqyax) and the form reached its pinnacle during the period of Russian enslavement of the Aleuts in the late nineteenth century when sea otter were still abundant before the fur trade caused them to be hunted way beyond sustainable levels.

My starting point was a baidarka collected (a very neutral word avoiding saying whether the boat was given, bought or taken) from Atka Island by Margaret Lantis in 1934 (and therefore one of the last of its kind). This went to the Lowie Museum under its accession number LM 2-14886 (now the Hearst Museum) where it was surveyed by David Zimmerley in 1978. A number of people have built replicas, both skin-on-frame and hard-shell boats, and others have used it as a starting point. I wanted a boat suitable for long trips with lots of food and gear, and I’m probably heavier than the Aleut paddler for (and probably by) which the boat was built. Zimmerley’s drawn waterline is based on a 68 kg paddler with no extra equipment, and I’m 85kg. With camping gear and food for two weeks and typically water for two or three days, I was going to want to take up to 30 kg of equipment, too. The boat itself would weigh maybe 20 kg, so I was looking for a displacement of more like 130kg. Having faired out the lines, I lengthened the boat to 5.5m, and increased the beam in proportion. Initially I also increased the depth, which gave me a huge volume boat. As I refined my ideas, it became clear that a boat that was too deep would float too high, catch the wind, and also be a poor fit for knee-bracing and rolling. Accordingly, I revised the depth downwards among a lot of more minor changes.

I now had a design which was sufficiently different from the original that my confidence in it’s being what I wanted was a little thin. I wrote more software to calculate centres of lateral resistance and wind resistance and other naval architecture statistics to help me see if the design made sense. In the meantime, I decided to build another boat entirely, which became my fast (but none too stable) Greenland-style kayak based on the Squeedunk Cormorant design with a stitch-and-glue hull and stripped deck. Experience paddling that boat fed back into my ideas about the Borealis design. I reduced the deadrise a little by filling out the bilges. I sought to reduce the risk of lee helm by deepening the keel over the forward two metres of the boat, as I had already raised the foredeck to get a raked cockpit to ease entry and exit. I ended by re-scaling the boat to 5.4m with the idea of building a stitch-and-glue prototype which, at the shorter length, I could build with only one scarf joint in the panels – 5.5m was just too long. But about that time also, I built an external strongback, as a plywood box-beam. On this I set up stations for forms at the positions appropriate to the 5.5m strip-build design. I experimented with a few ideas for construction of the bow and stern, none of which were going to make it into a final boat. 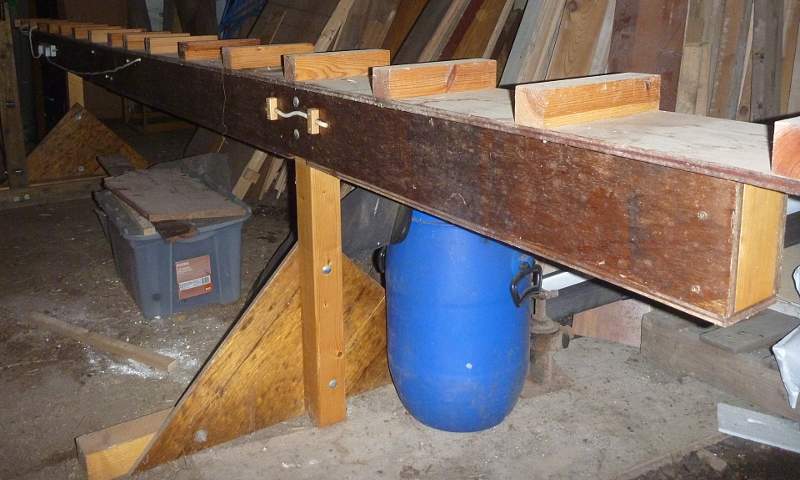 The strongback patiently waiting with stations set up…

Since I was now paddling Piqqalujamik takujumavunga and also still had my North Shore boat, the urge to get on and build the Baidarka was rather less and the strongback lay gathering dust in the barn (5.5m is too long for the workshop in which I built the first two boats). Meanwhile I worked on other designs, and contemplated a Yost-style folding boat based on the Anas Acuta, but found some of the materials difficult to source. I got as far as building another small strongback for a whitewater playboat design based on the Fluid Flirt, but as I then acquired a real plastic Flirt, and building a strip playboat looked quite difficult, this didn’t progress far, either.

Ten years have now slipped away and I’ve done a lot of whitewater paddling in that decade, but not a great deal of sea kayaking in the last couple of years. 2014 is the year Mary will retire, and there are some big sea kayaking plans to come. We are already committed to going to St. Kilda in the summer and I don’t want to do that in the Cormorant. The Mistral will need a bit of work (hatch seals have been damaged over the years I’ve owned this boat) and perhaps I’d like a more distinctive kayak for such a location. After returning from Uganda, I had the Cormorant at a pool session and thought that the aft cockpit rim was a little too high for a comfortable roll on the back deck. I reviewed the Borealis offsets and made a few decisions, one of which was to lower the sheer by 3 cm amidships to enable me to have a cockpit recess low enough to get the aft rim down. Another was to abandon my usual “ocean” style short cockpit and go for a more modern keyhole style, which would make self-rescue and re-entry easier. In January, work has actually started on the boat. I’ve lofted about half the forms, and I’ve cut various wood for the bows. Today saw the first bit of epoxy mixed (only 8 ml of it) and material for the upper and lower bow pieces laminated together. There are other important bits and pieces for the build in the post, and a new table saw is in place to cut strips. Aside: I cut all the strips for both the previous boats on a small bandsaw. This cuts a much thinner kerf than a table saw, so wastes a lot less wood, but produces a finish on the strips that requires a lot more planing/sanding. As I have enough salvaged Western Red Cedar board from ceilings removed in the house to build six or eight boats, and I’m unlikely to live long enough for that, I decided that wood wastage was less of a concern than was keeping the sanding work to a minimum, so a table saw is the solution. More sawdust will just make our paths a bit less muddy … 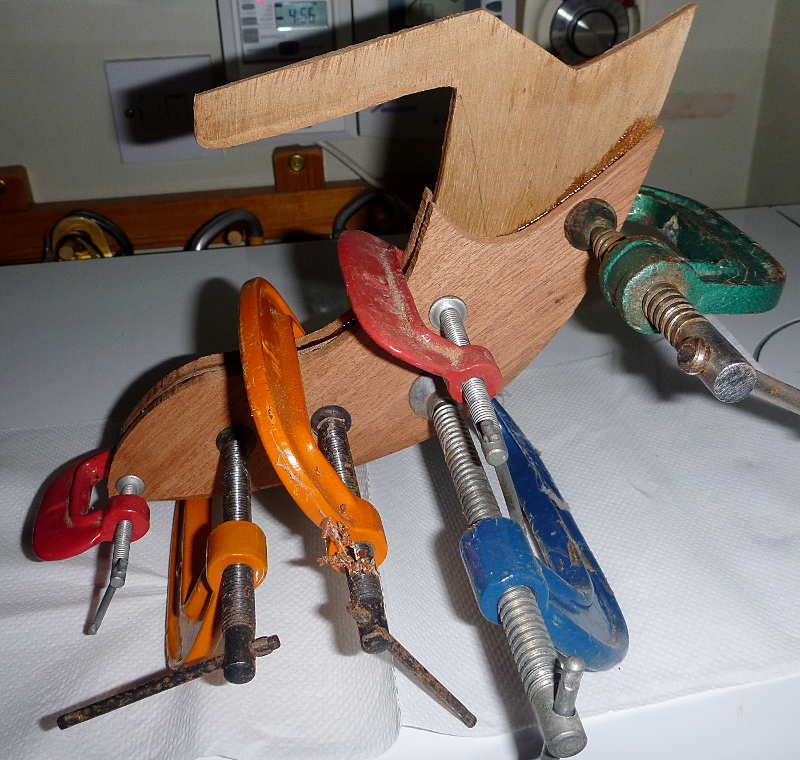 As usual, I am using salvaged wood – the 6mm ply is left over from another project, whilst the mahogany used to be part of the window or door frames in the conservatory, before this was rebuilt when its double-glazing was reaching end-of-life. The laminations were cut to shape from a thick piece of wood (24mm or so) and then cut into two thinner pieces on the bandsaw. The pieces were still more than thick enough, and will need to be reduced, but they are very hard to hold, and I decided to laminate the bow piece to give a bigger lump to put in the vice. The upper bow piece is laminated from two pieces of mahogany

The thickest piece of old-window-frame was not going to be enough, so I cut two pieces between old screw holes, and routed a 3mm deep rebate in each one so that, now the pieces are epoxied together, there is a neat 6mm slot into which the ply from the lower bow piece will fit neatly. There will be a bit of ugly bodge clamping to do at first, but once strips start being laid, these will hold everything in place. There’s a lot of material to remove before the upper bow piece has the right shape. The surface to the right in this photo will eventually be the deck. My workshop is not (yet) heated this year, so the epoxy is curing on top of our oil boiler. This will produce a rising temperature, but outgassing from the wood isn’t an issue as it would be if I was applying a sealing coat or glassing – here bubbles would not really matter in the epoxy, but air can escape from the other wood surfaces anyway. For some later steps it will be necessary to have the components and epoxy warm to start with and cured in a cooling workshop. Can’t leave it until summer though, as I will want to be paddling this boat by the end of May if I’m to take it to St. Kilda in July. Thinking about the future – which wasn’t going to include running this !

We’re on our way back after a pretty successful trip to Uganda, with five runs of Day 2 – and I’ve now run every rapid upright at least once ! Unfortunately, after a swim-free 2013, New Year’s day might have gone better as I swam both below Kalagala and on Vengeance immediately after. By the bottom of that, I’d got one watershoe and no socks left, so I was a very loose fit in the boat for the rest of the day. The last day was a lot better, starting off down the (very) bottom section of Itunda, and continuing down Day 2 with my first roll- and swim-free run of Vengeance and continuing upright all the way back to Hairy Lemon. Holiday total, thirty two rolls, three swims (I got myself caught on the eddy line after rolling up on Superhole).

We were up (slightly gratuitously) at 5 a.m. to be ferried across the back channel from Hairy Lemon Island to meet our airport shuttle. The traffic was nowhere near as bad as on our arrival before Christmas, so we got to Entebbe a bit early (four and half hours before the flight). Currently in Doha airport, with a seven hour wait for our final flight to Manchester.

Should be home mid-morning. Probably won’t make it onto the river…