This was the inaugural Upper Tees Creek Race – organised by Rory Woods as a pilot for what is hoped to be an annual event. Low water perhaps deterred a number of people from traveling a significant distance but there were still over forty racing on the day and it attracted quite a lot of interest both from passing walkers and spectators who had come specifically to watch the event. It was also great fun!

The format was an initial time trial from just above Dog Leg down to the bottom of Low Force (it was originally intended to end under the Wynch bridge, but this clashed with other river users doing a WWSR course, so this bit was shortened slightly). The times from this provided seeding for a series of boater-cross heats from just below the island below Dog Leg, to the same end point. 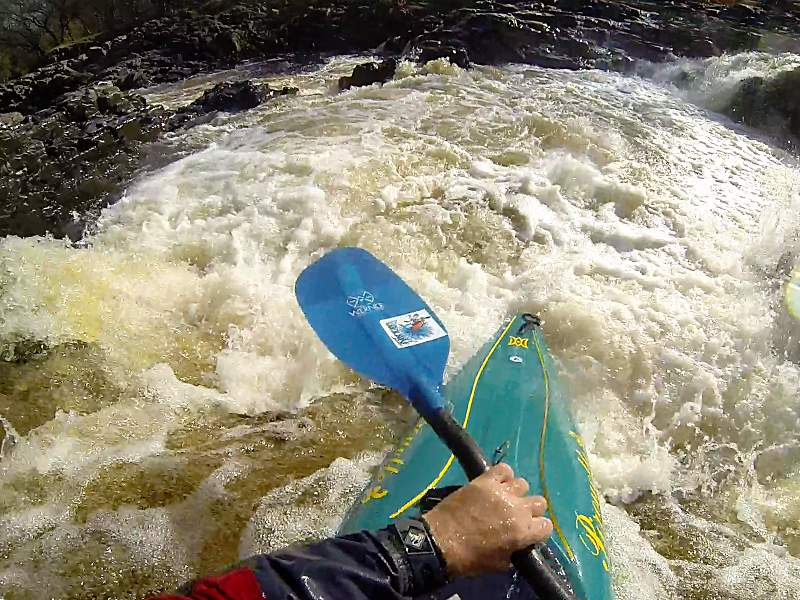 The first heats had five paddlers and subsequent ones (mostly) four. The main classification was for typical creek boats (maximum length nine feet) paddled as kayaks. There were a couple of long boats (although Andy took a foot off the back of his ancient Pirouette in practice on Low Force last week, it was still over nine feet), one playboat, and one boat paddled as a C1, but as these classes were too small to be useful, everyone just competed together. There was also a separate boater-X for ladies in addition to the main ones. Of the SOC members, Andy was, remarkably, the only one to progress to the quarter finals in the Boater-X part of the race, mainly down to his traffic cycling experience giving him the ability to barge people onto rocks and shallow spots and cut them up without worrying about manners (this is how boater-X works, as well as city cycling). This (and perhaps a faster boat) got him over Horseshoe in second place. The paddler behind him took Jacuzzi chute, which was proving to be a much faster line, and seemed likely to get ahead, but he cocked it up and Andy was fast enough down Low Force to be able to cut him off and get to the banner first. He couldn’t quite get a hand on it, though, and was technically pipped by the fourth place paddler who sneaked in and got a hand to the banner while Andy was trying to make frantic draw strokes to get there… However, after he tried to concede 2nd to Andy, it ended with both taking part in the quarter-final (coming fourth and fifth, and thus eliminated).

For those not too knackered, there was then a Le Mans-style mass-start race over the same course. The people who led this by a large margin almost to the end were those who avoided the delay of putting spray decks on. However, understandably they chose not to take the line down Jacuzzi chute so the first three places were taken by those that had got a slower start by taking the time to put decks on. I was amazed at how many people successfully ran both Horseshoe and Low Force without spraydecks and stayed afloat! “Remember to leave plenty of space between paddlers on the harder bits…” – this is not a photo-montage, they really were that close together. Mass start boater-X at Low Force – note lack of spraydecks on first three boats!

Although water levels were on the low side and there was a bit of a breeze, the sun shone a lot of the time, and I think everyone enjoyed themselves, even those who swam. We think Andy was the oldest contestant and very definitely had the oldest boat – older in fact than at least two of the paddlers!

Not the equipment that immediately springs to mind when someone says “welding”, but patching the sort of hole that losing a foot off the end of an old school boat leaves does need a bit of “plastic volcanics”. A pool test tonight will see if it is remotely waterproof, or just drops off at the first attempt to launch… and the verdict is that it remains my driest boat – hardly a drop of water inside after fifty or so rolls. Yeah… it’s kind of untidy, with sticky out corners. If it survives the first test, I may have a go at melting the corners down to a more rounded shape that will leave the inevitably brittle plastic a little less vulnerable. I reckon it will be OK to paddle the Tees again this Sunday, but may not cope well with a boater-cross.

Following on from last week’s first go in my original Pirouette for twelve years, and since levels were at a rather friendly just-below-0.6m, I ventured forth onto the Upper Tees. I was very much in two minds about whether to run Dogleg, or whether, perhaps, to put in at the eddy part way down for a first run. In the end, I decided that the main reason why I go wrong here is in trying to catch all the eddies (particularly the very top one) on a first run down. Since all I really wanted today was to see if I could hit a racing line, and could live without a lot of carrying the boat backwards and forwards, I went for it. Past the first stopper and heading for the middle drop Out from the eddy, and straightlining past Pinning Rock

Since I’d stayed upright, Michael wanted a go in the long pointy boat. For the first time in (longer than I can remember) he seemed to be having more difficulty than me running Dogleg – but he did stay upright and get his line sorted before the middle drops. Michael making a strong recovery after an exciting wobble

With Dogleg behind, everything else was going to be easy, and indeed , I got a pretty good boof on Low Force, landing flattish pretty well out to the left, a fairly ideal line. So it came as a slight surprise to find family and friends advising me to get to the bank with some urgency. There, it became apparent why: Ooops – I always thought it was a brittle boat, but that was a shock !

Still, it does now drain very easily. After a bit of thought about the amount of buoyancy packed in the back (two 18-litre airbags and four 3-litre wine bags) I reckoned I wouldn’t actually sink even if I let the boat fill up completely, so I carried back up to run Low Force a second time. Another fair boof, and I didn’t take any more off the back of the boat. Meanwhile, other family members were having a more successful time… 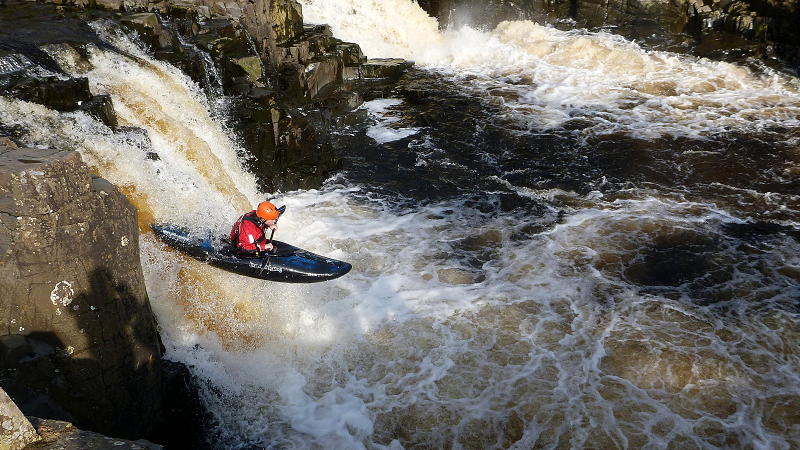 Michael on about his fifth run…

A bit of Duct Tape and I’m sure the Pirouette will be as good as new (which perhaps isn’t saying that much). However, there’s another problem. It seems that there may be a limit on the length of boat allowed in the Tees Creek race next weekend, and even with this drastic attempt by the Pirouette to shorten itself, more surgery may be needed… or I may have to use the Acrobat – the only plastic whitewater boat I own that I’ve never run the Upper Tees in. Drat !

Since my H2 has a hole, and more and more I’m disliking the Ammo I originally bought as its replacement, I’ve been casting about for other boats to paddle. In time, Michael is planning on a new creek boat, and I am seriously contemplating his Stomper 80 which I got on very well with on the River Garry. But until that’s available, I’m reluctant to buy another boat just as a stop-gap. So, out came my very first whitewater boat, holed more than twelve years ago, and amateurishly welded, with a fibreglass layer over the top. I’ve had the boat 18 years, but only ever paddled seven rivers in it, so it is remarkably unscratched (it’s done three days on the Spey paddled by someone else, but apart from that, it’s only been used on lakes).

The boat (as advertised). Mine’s a sort of bottle green…

Perception’s 1995 catalogue (helpfully scanned on their website – that’s good customer service, which I appreciate) says: The Pirouette challenges even the whitewater experts to discover what they can do. It’s an ultimate playboat that accelerates like a shot across eddy lines for a “must” ferry. Turns on a dime. Loves to surf, do 360’s and pop-ups. And yes, it pirouettes like crazy. and Paddler profile: Gung-ho intermediate, advanced. Hmm, I’m sure I gave the impression of being beyond absolute beginner stage when I was out buying my first boat, but I did make it clear that it was my first boat and I’m quite sure that I didn’t claim any extensive experience on moving water, so I suspect that nowadays that would be considered a mis-selling scandal ! Maybe that’s why I swam twelve times on the Wear and thirteen times on the Keswick Greta… Looking at what are considered to be good playboats today (my Flirt is 1.9m long, and at the “good river runner” end of the playboat spectrum) it’s interesting to see that a 3.4m long boat was considered an “ultimate playboat” less than two decades ago ! Breaking out, bottom of Tree Rapid

So after cleaning off a decade or so’s Starling crap and other muck, I had an hour in Richmond pool and found it really easy to roll. I was almost tempted to venture straight out onto the Upper Tees on Saturday, but (perhaps fortunately) felt really awful first thing in the morning, so just spent the day taking photos and videos of Michael among a large crowd of Durham Uni freshers. Sunday was to be a beginners’ trip for SOC and the Cotherstone-Barney venue on the Tees was as safe a place as I’d ever find to go and see how the boat handled before taking it anywhere challenging. A long, slow trip demonstrating and/or practicing ferry glides and breaks out/in proved to be more fun that you’d expect. It’s a heavy boat compared to a modern playboat and didn’t accelerate anywhere near as well as I’d expected. But it did cruise effortlessly faster than all the Burns and Remixes, etc. so I can see it’s having value as a creek racer when there are flat bits between the rapids. It does need to be driven quite fast if you want it to snap into eddies, and to turn quickly, a lot of edge/lean is handy, but I found it a lot more stable than I remember it and playing on the one high energy feature of this stretch of the river, did find that it was easy to roll (oops). I think I’ll take it out again 🙂 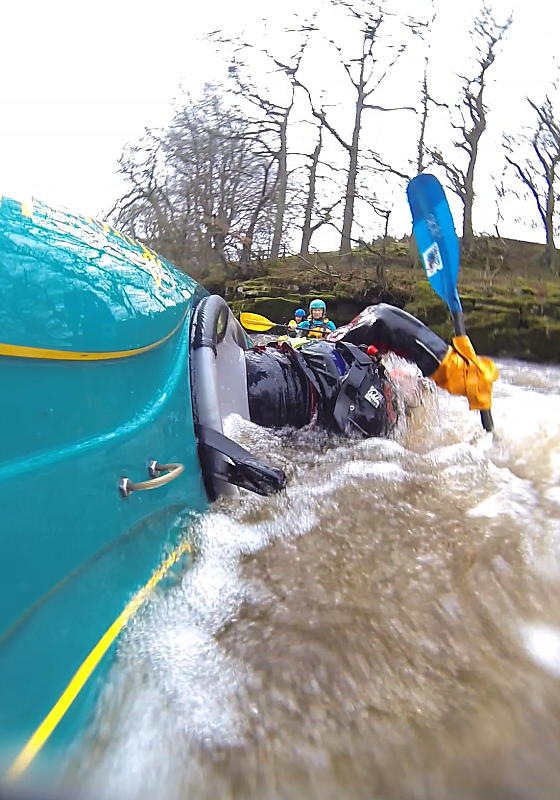 The boat-mounted camera was on a small sucker-mount (it’s actually one designed for putting mobile phones or mp3 players on your windscreen – inside) and the only smooth-enough and wide-enough patch of plastic was further away from the paddler than ideal – out of reach in fact. This gives a lot more view of the river than the usual spot, but I’ll have to work out a better way of operating it than getting out of the boat every time. Yes, the GoPro3 does come with WiFi, so maybe I’ll try that, but the WiFi reduces battery life considerably – even with the camera powered off.