The date for this trip was chosen not only to be during the good wildlife viewing season, but also to be as close as I could get it to a spring tide. The Farnes have various narrow channels and reefs, over which the tide rushes, producing overfalls if opposed by the wind, and some waves and breaks even if the weather is calm. The swell refracts round the various islands and can produce some very changeable sea conditions even on the apparently straightforward crossings (Inner Sound and Staple Sound).

There were lots of potential takers for the trip, but as the weather was forecast a bit damp, with force 3-4 onshore winds, a number of folk dropped out, leaving us with a group of six. The wind was actually pretty minimal, with just a bit of swell, fairly short at around 5 seconds, and just a little bit of surf at the beach. I duly decided to paddle in Piqqalujamik takujumavunga (the narrow and slightly tippy wooden kayak) with a decent amount of ballast. This would be my eighth time paddling out to Longstone, and the fourth of those trips in this boat.

Although the cloud was low and at times the A1 was in fog on the journey up, at sea level, visibility was good (unlike last time when we’d set off for Megstone in fog, on a bearing) and the weather dry when we put on. The sea got a little more exciting as we approached the northern tip of Inner Farne as swell was coming round the island, opposing the building tidal flow in a stream going south. We’d let ourselves drift a little low on the tide and had a bit of a fight against the race to get into the calm water north of the Kettle. By contrast, Staple Sound was almost glassy smooth, but with a gentle up and down from the swell. This lulled us somewhat into a false sense of security as we made our long ferry glide across, and at a little over halfway we suddenly became aware that we were again dropping down towards the breaking waves at the south of the sound, where the tide accelerated over shallow water. Quickly steepening the angle of our ferry, most of us made ground up to Gun Rock and then dropped into the eddy by Staple Island. There were a worrying couple of minutes when it looked as though one of the group was not gaining enough ground to avoid ending south of the island, but he dug in hard and stayed ahead of the break, to hit the west of the island high enough to make the eddy.

From here, we stayed up-tide of the remaining islands and reefs, with a quick scoot across the two channels that wanted to suck us down either side of Brownsman. As we sneaked up in the eddy behind North Wamses, we were surrounded by a really big crowd of seals, all curious for a look at the kayaks. Then the first three took Craford’s Gut quite high, aiming well left of the Longstone light and having a fairly easy time. The second three went a bit lower and again looked as though they might get drawn down over the breaking waves and out to the south. But once more, a burst of paddling hard avoided this mishap and we all reunited for lunch in the shelter of a small building. There really is a lot less of Longstone when visited at high tide, so there was no need (or possibility) to wander to see the quite exciting looking waves between Longstone and Knivestone. 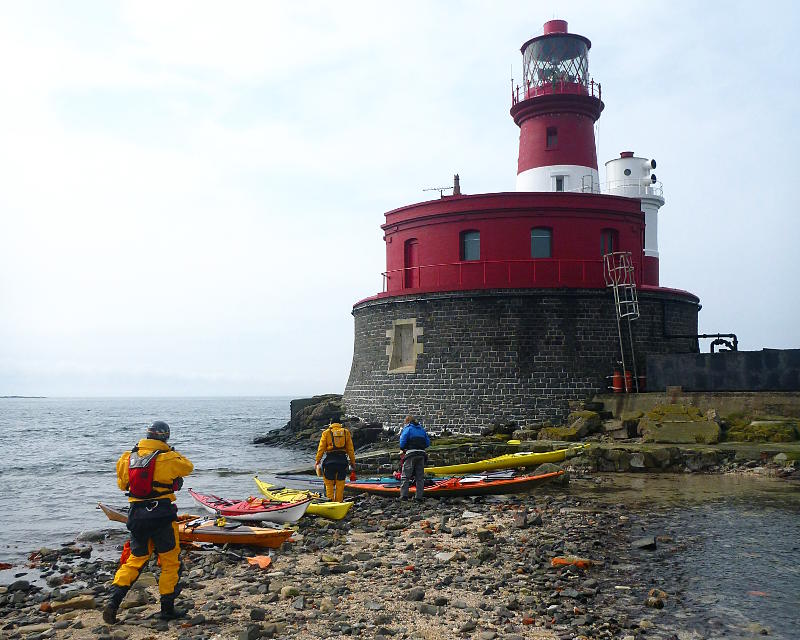 Returning to the boats at just about high tide – not much of Longstone to see!

The tide was still running fairly swiftly as we got back to the northern end of Brownsman and it seemed a shame to lose a lot of ground by dropping down to look at the stacks south of Staple, so we took an easy angle across Staple Sound, aiming for the buildings on Inner Farne. Towards the end, it was clear that our line would take us through some big breaking waves over Knoxes Reef, so we dropped down a bit through a calm channel then weaved past another bar (which some of the seals were using to get more height for a better look at us) to enter the calmer waters of the Kettle. There wasn’t much enthusiasm for a landing, but as the tide was now slackening off and the more time we wasted the less it would oppose us on the slog back to the take-out, we headed round the south of Inner Farne below the bird-crowded ledges and cliffs. Some folk found themselves needing to cower behind a paddle blade as birds dive-bombed the group, but at least they weren’t deliberately aiming at our heads the way the terns do on the island itself ! 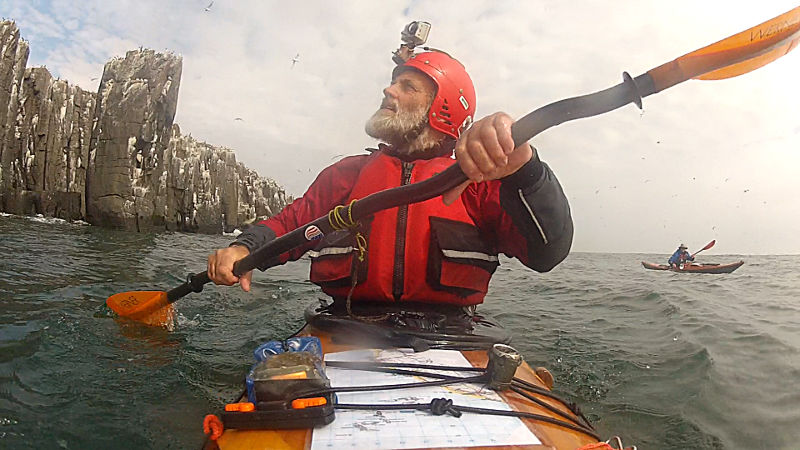 Plenty to look at and pleasant weather at Inner Farne

Using the put-in and take-out at the Wyndings does make for a much longer crossing than the main Bamburgh beach, and the tide still hadn’t turned, so we cut across close to the shore before heading up the shoreline. This meant we were within constant sound of the surf breaking, which is never good for the nerves, as it is always hard to tell exactly how big it is from the seaward side of the break. In fact, it was fairly small, and all made it to the beach without mishap, despite it being the first surf landing for at least one of the group.

The tracklog says 18.5 km and shows some distinct kinks and wiggles where we met the faster and rougher bits of water.

Gauges were up, and we had a small but viable group, so we were looking for small rivers that would be in condition. First choice was the Rawthey (again ? so soon ?) but it had stopped raining and by the time we were near Sedbergh it was clear that this had dropped off a bit too much. However, there still seemed to be quite a bit of flow at the take-out, which encouraged us to go and have a look at the other feeder, the Clough. It wasn’t huge, but the book said certain rocks needed to be covered and they were, so we went for it. At this level, we certainly had plenty of time to look ahead, even if some eddies were a bit small, and we didn’t need to get out of our boats at all. The last drop (which had been river-wide with a lot of aerated water at the bottom when we ran the Rawthey two months ago) was a neat boof on the left and very straightforward. I then took the opportunity to get a last bit of video on the run down to the Rawthey/Clough take-out to make a workable ending to the Rawthey video. All good stuff !

It was now still quite early, so we cast about for ideas and decided we could recce the Swale on the way to something more likely in Teesdale. Despite me going a rather bizarre route via the Tan Hill (there’s a road in my mental image of the area which doesn’t seem to exist where I expected it) the Swale was still at 0.65m by the time we arrived, so it was a no-brainer that this would be our second river, and a second new river for Alex ! Interestingly, this is the same level on the gauge as on my second trip, but comparing videos shows that it was definitely lower on all the waterfalls and rapids on this trip, which perhaps explains why we seemed to bump and scrape in one or two places that I hadn’t expected.

We put on at Wainwath, as the section above that did look a bit scrapey, and we wanted to get to the drops before it dropped off any more. Mike and Alex ran Wainwath twice, whilst I faffed about to ensure I had enough battery power for the GoPro and only ran it once, but it was a sweet run. On to Rainby where the others both got perfect lines, and I was on line, but with the boat on edge slightly which meant I landed a bit sideways, but still upright. A quick inspection of Hoggarth’s Leap (aka “The Rapid” as it is almost the only bit which isn’t actually a waterfall) and we all made neat lines down this too, mine with a boof off the ledge on the right, the others more in the corner.

Catrake went on the right hand side without too much of a bump, and there was still enough water to get on down to Kisdon without scraping (though there were one or two bumps). Michael didn’t trouble to inspect Upper Kisdon, so Alex followed his line, and I was not far behind. None of us fancied the centre line on Lower Kisdon, and there wasn’t enough water for the right hand side, so we struggled up the bank and walked out from here.

Two separate videos from one day, and uploaded to youtube the same week ! That must be a record (for me, at least). I’ve also managed to finish editing and titling (and in one case voicing over) three more videos which are now embedded in older posts – “Old School on the Upper Tees” (from Tees race practice), The Rawthey and the Etive from November 2012. There are still several more videos almost finished from the alps last summer, and at least one from North Wales ages ago (still way too long) – I am trying to catch up on all these (but not next week, as we will be skiing).