Today’s sports programme was really about driving the Stelvio, which at 2757m I think is the highest of the alpine passes I had not previously driven, and conveniently nearby. So I headed off up the Inntal and hacked left over Reschenpass and into Italy. The Stelvio proved a fun drive (if a little busier than one would like) but the weather turned pretty foul, with sleet at the top. 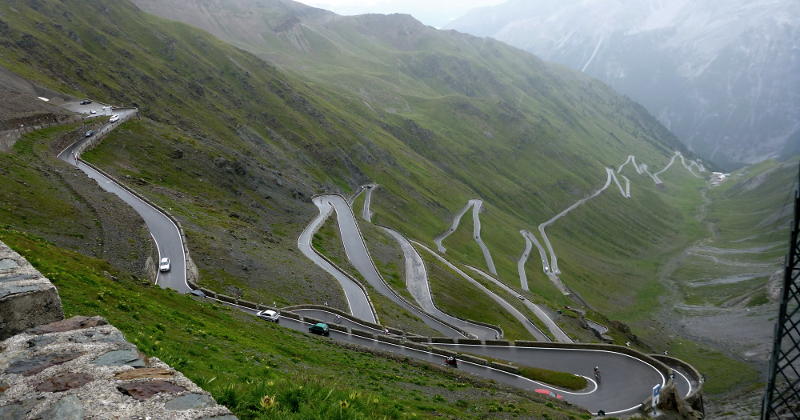 The east side of the Stelvio Pass, a fun drive despite the rain and traffic. Looks mean for those cyclists…

I dropped over onto the easier western side, then took the first right, dropping into Switzerland, then heading up valley towards the Pass dal Fuorn, a mere 2149m, which would take me back to the Inn Valley. The weather quickly brightened up on this side of the crest, and by the time I arrived at the pass, looked like a nice day for a walk. Unfortunately, the only accessible 3000m peak was back at the border in the clag, and Piz Daint was the obvious choice if I wanted the sunshine. The distance was not that great at 4 km, but it is well over 800m of ascent to its 2968m summit. Starting fairly gently on a good path, a shoulder is crossed and a bit of downhill ensues before a lesser path heads off left and soon reaches rockier terrain. A long section of zigzags was eased by the sight of a couple ahead on whom I was gaining ground – these ascents always go faster with a bit of competitive spirit. The route reached a bit of a col where a path continued down the other side, but my way was left, on up the ridge, and this soon reached a levelling where the view ahead showed me exactly what I had in store to reach the top. Unfortunately, another group who I was hoping to overtake on this stretch decided to stop for a break, giving me no competitive incentive on the final steep ascent. This proved to be quite exposed, with very steep sides and loose stones underfoot. Not really that hard going up, and I was soon at the top, just outside two hours, but well under the time signposted at the start of the walk. 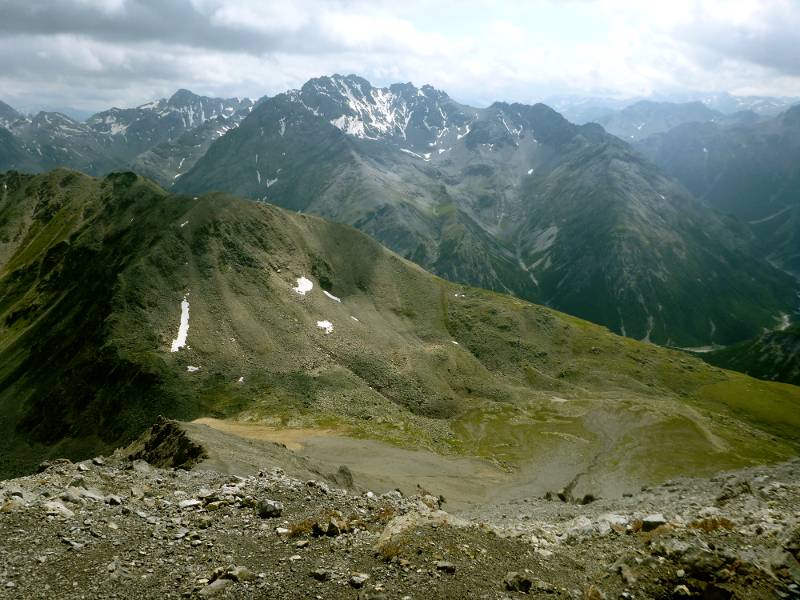 The summit view was really very extensive, with no higher peaks in the foreground, so although the quality of the walking was nothing to write home about, and it’s always annoying to be so close to the 3k mark without hitting it, this was rather reminiscent of climbing a Corbett back home – never as high as a Munro, but almost always a better viewpoint. The view can only distract for so long, however, and soon I started the descent, which, as expected, proved a lot more delicate than the way up, with the exposure very much more apparent looking ahead and down. All went well, and from the shoulder, progress became very quick indeed, getting back to the car in under an hour and a half. The drive down into Inntal showed a river, the Spöl, that was not in the guidebook, but looked paddleable but a little inaccessible at the bottom of a steep V-shaped valley. Looking at the map, however, it seems that a dam steals the water and directs it to the S-Chanf hydro, so maybe it never gets enough water to run. Once back at Zernez in the Inn valley, the route was familiar from having paddled various sections of the river and didn’t take long back to the campsite at Prutz.

Sarah and I drove up what proved to be a very entertaining single-track road from the back of Roche de Rame, unsurfaced from soon after leaving the village. There seemed to be a highish population of kids and dogs at the bottom end of the Plan de la Loubiere where we planned to start the walk, so drove a bit further to find a parking spot out of the way, then headed back to cross the bridge and onto a forestry track. This was pleasant enough, though steep, and mostly shaded by the trees. As we gained height, the track curved round and started to traverse into a valley. Suddenly, and rather unexpectedly (I hadn’t studied the map quite closely enough) it dropped rather steeply into the next valley to cross the stream. Hmm, that’s quite a bit of extra reascent, then…

We now plodded steadily up valley across a south-facing slope, still mostly shaded, but quite steep. This eventually broke out into pasture and rock scenery opposite a nice waterfall, traversed round past a rock face and up some more into a wider valley where the ascent was a bit more gentle, but we were in the sun. Grassy pasture with lots of flowers alternated with patches of bare limestone and the path wasn’t always distinct. Thus we missed the way to the largest of the lakes (which was hidden by the slope above us) and headed round more easterly towards the two smaller lakes. With no path now visible at all, it was very pretty, and we headed towards the outlet valley from the smallest lake, aiming to avoid too much up and down. 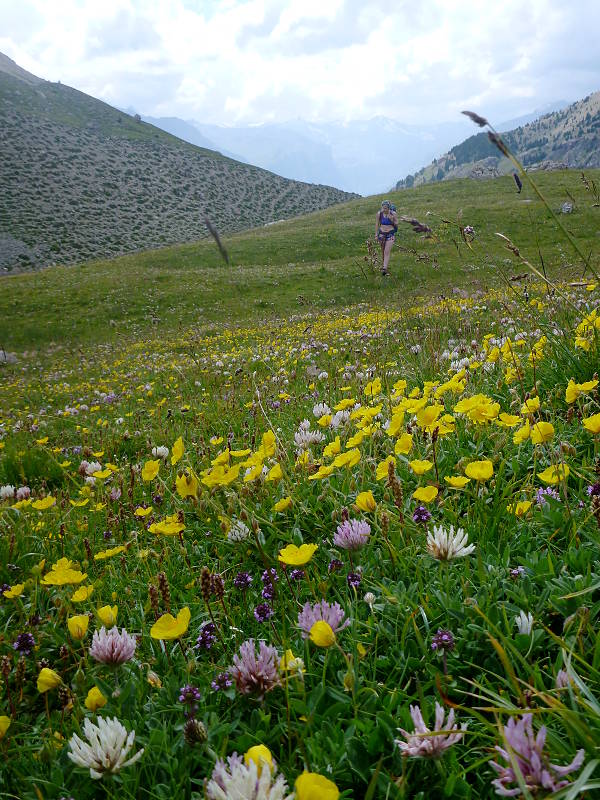 Sarah walking through flowery pasture below the three lakes cirque

We were now finding that the walk was proving a bit longer than we’d hoped and, seeing the steep ascent yet to come, curved round right, missing out the lakes and heading over more stretches of bare rock towards the col. Although this last bit was a little loose and rocky in places, it proved less strenuous than perhaps we had feared and we were soon rewarded by the view from the col. 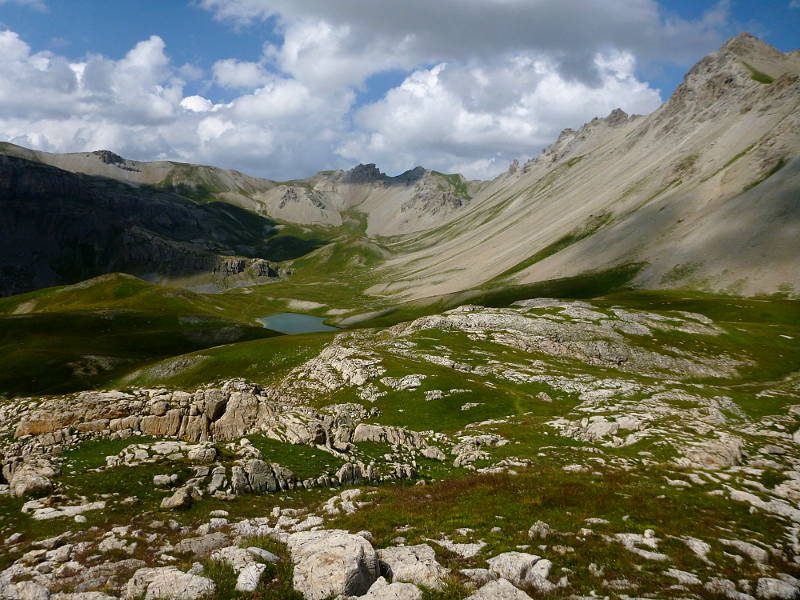 The south side of the col was a little steeper with a lot less vegetation, and bits were loose enough to require a bit of care, but soon we were down onto a more gentle area (with Marmots) in a bowl draining into the valley where we had parked. However, the stream dropped into a deep V-shaped gully with much loose stuff and clearly wasn’t the way down. The path was very vague around the top of this, but once we’d skirted west, it became quite well-defined again and took us right back to our upward track where we turned sharp left and headed down. By now, the lowering skies had given rise to rumbles of thunder. Crossing the bridge, we upped the pace a little along the now-level track, and reached the car just as the first quite big spots of rain started to fall. Excellent timing ! The walk proved to be about 13.5km with 800m of ascent. We drove down fairly carefully, as the track was a little slick in one or two places over polished stones.