Every picture tells a story. Not quite sure what story these ones tell, though… I can almost imagine someone trying to run Dogleg on an inflatable crocodile in July or August, but November ? And what happened to the people who were driving these air-filled reptilian toys when they got punctured ? Did they survive ? Someone must have, as the herpetological basket cases were placed well out of the water, both on the same bit of rock. Anyway, it seemed irresponsible to leave such litter by the riverside, so I rescued them. Heading down Salmon Leap having rolled on Dogleg

Well, OK, I say “rescued”, but the less torn one had its tail rolled up and stuffed up the front of my buoyancy while its head got a good view of proceedings from the top of my spraydeck. It may have taken exception to being taken down Dogleg like this, especially as I had to roll… 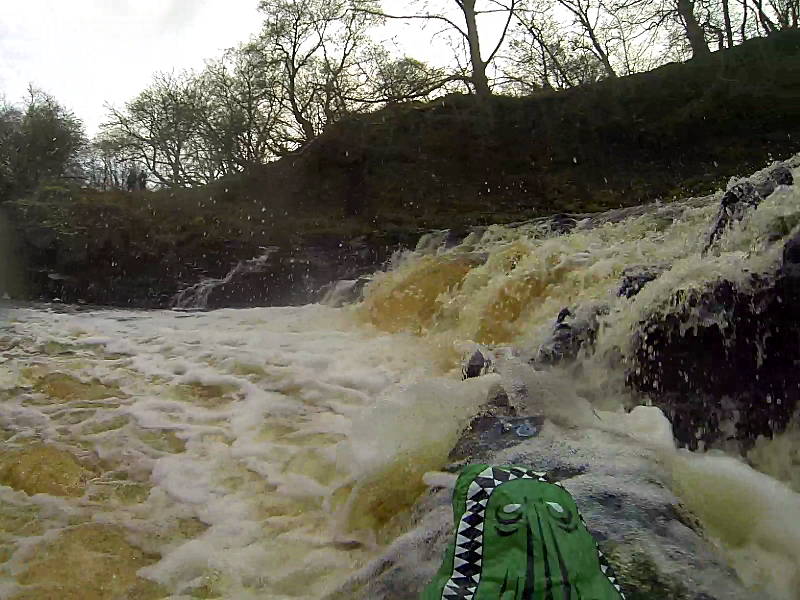 Wrestling the Croc at Wynch Bridge

The crocodile proved no obstacle to a run of Horseshoe or Low Force, but as I sunk the boat in a stopper on the Wynch bridge drop, it started to look as though I was running it with just the toy…

Just ten years ago this coming Thursday, we were in Dumfries and Galloway looking for water. We were not having much success, but took a look at the River Doon, which is supposed to run on the compensation flow from the dam. We walked away, and found water in Carsphairn Lane which was being released from the other end of the dammed loch. We’d wasted so much time driving around that we finished that run in the dark, with ice forming on our buoyancy aids.

This weekend was shaping up to be very similar, as despite huge levels on Friday, we found no water in the first two rivers we’d gone for. So once again we found ourselves at the top of the Doon, on its 2½ cumec compensation release, with only a couple of hours daylight left. A check had shown that Carrick Lane would also run, but the forest road was closed. No-one fancied either a 2km walk-in or the risk of benightment on the river, so this time, we decided to put on the Doon, which a quick inspection of the first few hundred metres showed to be a reasonable proposition. 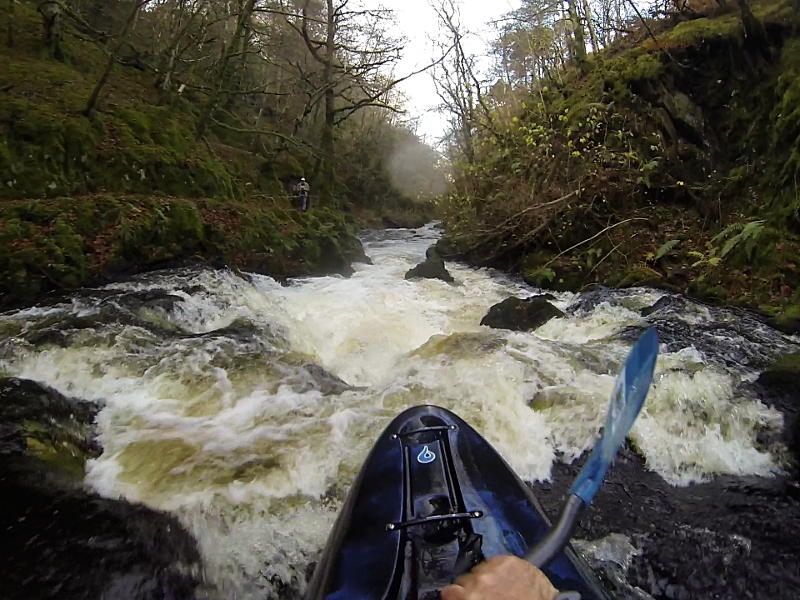 Grade 3, the guidebook says, and with comments like “this guidebook tends to overgrade things” we set off expecting a technical but not too demanding run with the main hazard being odd bits of timber. It soon proved steeper than we’d expected, and quite narrow in places with plenty of rocks to get hung up on. With a group of seven and small eddies, we made quicker progress than might be expected, with a few odd pins and some drops not done entirely elegantly. A footpath followed the left bank, providing us with spectators who also thought it an entertaining day out… and did provide some scope for inspection or setting safety Mary on the only actual drop on the Doon.

The gorge ended soon enough, and the river opened out, flattened out and became a little tediously shallow in places, with even more overhanging branches. The final part was deeper water but very encumbered with willows before we came out into a shallow loch with plenty of wildfowl and just about enough daylight to get the the take-out bridge at the far end.

Just like the trip ten years ago, we elected to head for the Nith on Sunday. This was just over two feet at the Drumlanrig bridge gauge (0.75m on the SEPA gauge) which is a fine level – enough water to keep moving well and provide a few boils, but quite technical in the gorge. 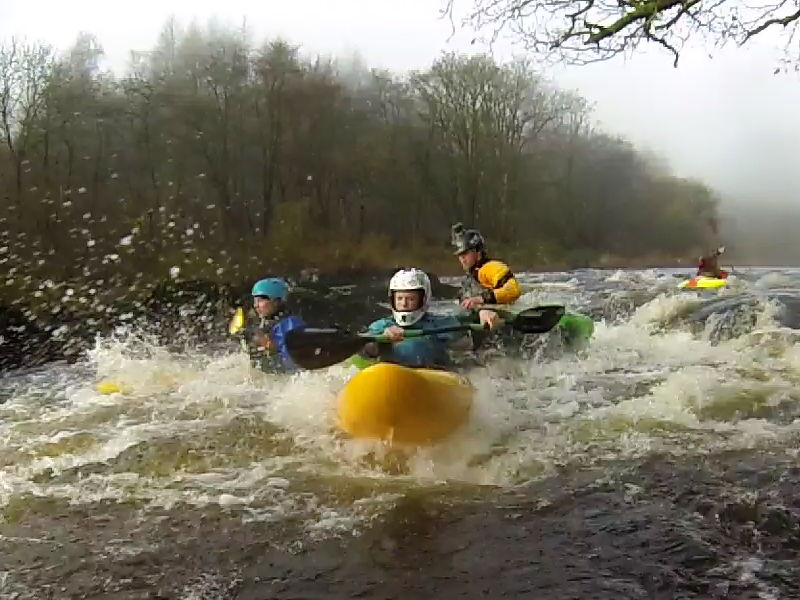 No-one seems to have told them it isn’t a Boater-X !

We met up with the other SOC group putting on just ahead of us, having done the same trip the previous day with a foot or so more water. We soon overtook them, intent on a mission to see if we would have time for the Border Esk as a second river. The gorge proved to be read-and-run all the way, with the tree that blocked the entry rapid last time we were here (in low water at Easter 2013) nowhere to be seen. Mary had a successful roll, and we were at the end well ahead of the other group. However, by the time we’d shuttled (still only 12:30), enthusiasm for a second river had waned somewhat and we got changed.

After such a dry start to the paddling season locally, it was great relief to get some rain. I’d been offered a chance to paddle the Upper Swale, but I thought it would probably drop off too soon, and I possibly hadn’t done enough paddling recently to be confident of paddling at that level, so I declined. Shortly afterwards, Sarah phoned to say that she was looking for a trip with friends from Leeds and the Tees Greta seemed to be coming up. It was to be a late start owing to lectures and travel time, and by the time we got on, the river was at 0.6m (top end of “low”) and starting to drop off. However, showers kept it up and possibly it rose a little towards the end. Perhaps a bit far right running in to the slot drop

A lack of recent floods and a certain amount of riverside tree felling means there is quite a lot of small timber in the river (an ever-present hazard in such a wooded valley). Pretty much everything can be sneaked, and the big tree which was right across the river shortly before Hell Cauldron last year has been swept aside and is now easily passed. But one branch on the left of the first island caused us to stop and do a bit of clearance work. We made pretty rapid progress, as I’ve done the river thirteen times before, Sarah had done it before in bigger water and all were happy to read and run. At this level, visibility ahead and plenty of eddies mean that there were no surprises coming up at speed… Lots of boulders to flare off at this level

Hell Cauldron itself, and the run in, seemed to have more water than we’d expected from the rest of the river experience, but the section down to Greta bridge seemed low again, so maybe this is just a fault of my memory for the levels. This was a freshers’ trip with Durham University Canoe Club, and a video featuring some new paddlers was requested. There wasn’t time to do lots of bank footage (at least one person got pretty chilly just with the trip we did) and I hadn’t brought a DSLR, so what bank footage I did take was just with the waterproof compact (which at least has some zoom) at Woden Croft. The rest was all headcam with the Hero 3. Since the video is rendered at 720p (the most the compact camera will do), that left me a bit of scope to do some digital zoom in post-production from the original 1920x1440p48 footage. Hope it’s useful guys !

I’ve only showed the classic Racing Section, though we actually paddled all the way from Middleton. At 0.65m, the first section down to Eggleston Bridge was unexciting, and I have form for running out of battery on the Racing Stretch, so I was being careful not to shoot video until we got to the more photogenic part.