For some time I’ve been wanting a more expedition-orientated sea kayak capable of carrying gear for longer trips than the Mistral (no more than a week) and the Cormorant (five days is definitely the limit). I paddled a Cetus for the ten days in Alaska, and whilst conditions were never challenging, I definitely felt the boat was very pedestrian. The received wisdom is that if you don’t try a Nordkapp, you will always have nagging doubts about whether you missed out on the best possible expedition boat. Nordkapps have a reputation for being unstable and unforgiving, but this arises largely from people paddling them empty when they were designed to carry a big load – up to 90kg – and were never intended for casual day trips. The boat has also suffered from “genetic drift” over the years since the 1975 original, such that even Valley describe the early twenty first century versions as a “caricature” of the original design. For this reason, in 2015, they introduced the Nordkapp Førti, with the benefit of an original boat repurchased and measured. This is widely acknowledged to be a far better boat than the models which preceded it. Of course, two and half grand is a lot to pay out for a new boat to see if you like it, and even enough trips in a demo boat in increasingly challenging conditions is going to set one back by more than the cost of an early model boat on ebay.

Hence, I’ve been watching ebay for a while, and when a 1970’s Nordkapp HM came up fairly locally, I was definitely in there bidding. Remarkably, no-one else seemed to be keen, and the boat was mine for a song, and seems to be in remarkably good condition. As with many of these old boats, the pump behind the cockpit has either failed or been deemed useless and removed, replaced with a rather ugly metal plate. The bulkheads are in positions which leave a huge volume of cockpit to fill with water in a rescue, and the old failsafe footrest is still in place. The boat (which appears to have been originally orange like a lot of these older kayaks) has been thickly painted white above the sheer, and red below. I’m in two minds as to whether to go to the trouble of removing this paint (which would save a bit of weight) and restoring the gelcoat. Much of the other work is already decided and some of the bits and pieces already ordered.

New aft bulkhead
There’s a huge dead volume behind the cockpit. A new curved and sloped bulkhead will reduce cockpit volume by over 25 litre, and a dayhatch will rather more tidily fill the space where the old Chimp pump was removed.
Modern footrests
Removing the fibreglass plates which support the old-style footrest will be a pain, and whilst I’ve done this job before, it was in an old McNulty Seaglass double which had a lot more space in which to work. However, I very definitely do need either a bulkhead footrest (if the boat is just for me) or more modern adjustable footrests (if I decide to retain the flexibility for others to use it – or, of course, to sell it on). Since I have two sets of footrests not used on previous projects and one set removed from Mary’s Romany, there’s no excuse not to fit one pair of these. I don’t want, however, to bolt through the hull, so I’ve ordered glass-in studs from Fyne Boat Kits which should enable me to fit footrests without making holes. Always assuming I can find the space to work, of course.
New forward bulkhead
The forward bulkhead is far enough forward for a paddler of seven foot eleventeen, which I’m not. Even if I fit adjustable footrests and allow enough room for a taller paddler, I can have a bulkhead much further aft than the one fitted now. This will both reduce cockpit volume and increase cargo space. It’s a bit more committing than adding an extra aft bulkhead, as the existing bulkhead will need to be removed.
Foot pump
Many years ago I bought a Henderson foot pump and fitted it into a bulkhead-shaped piece of glassed-over marine ply, with the idea of putting it into my Mistral (whose forward bulkhead left me a couple of inches to play with). However, I never got round to deciding where to place the outlet pipe and this piece of kit languishes in the barn awaiting a home. If I’m fitting a new bulkhead in the Nordkapp, this would be an obvious opportunity to add the pump. The problem still remains, of course, of deciding where to feed the outlet pipe…
Seat and backband
The original seat has already been replaced, and I can’t say I like the one now in the boat any better, so I’ll be removing this and adding a foam seat with hip pads. I will also be seeing if it is possible to add an adjustable back band with ratchets – although the small sized Ocean cockpit may make this impractical.
Knee tube
Ocean cockpits don’t really go well with the sort of thigh braces seen in keyhole cockpits. The Nordkapp was designed with the intention of a more straight-legged paddling position, and there is evidence that a foam knee-bump was at one time fitted in this boat. A knee tube is generally a more solid support for bracing the knees as well as useful storage space, but does make getting in and out of the boat (particularly for deep water rescues) more difficult. I’ll tack in a temporary knee tube to see if this makes the boat too hard to use, and if not, this will become a permanent feature.
Skeg
The “M” in the model name reflects the Modified hull shape in response to the rather severe weathercocking of the very first boats. The HM has a deep extension to the keel aft, which reduces weather helm, but can make the boat hard to turn without radical edging. Modern practice is to fit boats with a drop skeg, and a number of people have trimmed down the HM fixed skeg and retrofitted a retractable one. I’ll paddle the boat for a while before deciding whether to take this step – it is clear that a retrofit to this boat is difficult without removing the deck. I would hope to be able to fit a skeg offset from the keel line (like the Islands Kayaks Expedition) to reduce the tendency to jamming. If this looks practical, then I’ll probably fit a conventional wire-operated skeg. If the space available only allows a skeg on the keel line, I’ll have to consider options to avoid the usual risk of a jammed skeg and a kinked cable.
Compass and video
The compass recess doesn’t accept any of the kayak compasses currently on the market, though Sestrel models for which the recess was designed are occasionally available secondhand. However, it became very obvious the first time I sat in the boat that the recess is in almost the perfect location for a GoPro mount, whilst a compass would usefully mount further forward, possibly in a newly built recess.

I’ve not finished editing the video from last year’s trip yet, and here we are, generating more footage. The weather is blisteringly hot, the Rainex is fresh and I’m getting better quality on a lot of stretches, especially the Bunker section (which we’ve run twice) where the critical bit at the entry to Canyon 3 last year was spoilt by a big drop of water on the GoPro. This year I have clear 4k footage from both runs (and good lines both times). 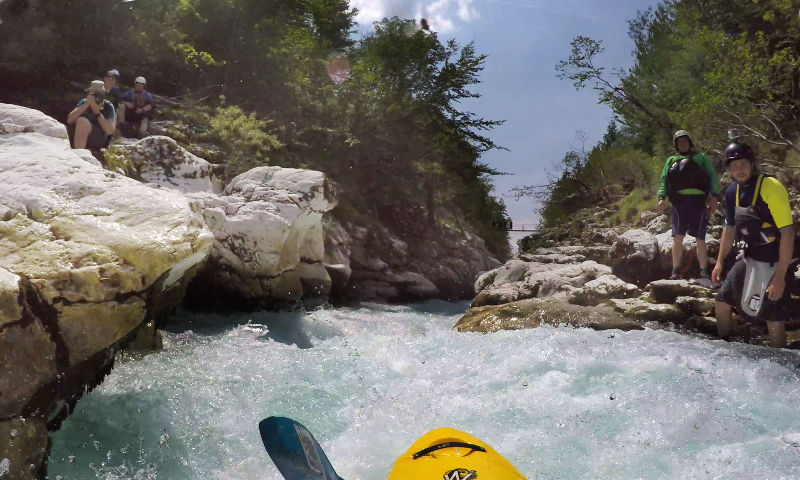 Dropping into Canyon 3 on the second run. 0.13m on the gauge.

The penalty for the hot weather and a low snow pack is, inevitably, low levels. The Koritnica ran at the start of the week, but is looking pretty empty now. The Bunker section is probably now out unless the thunderstorms we saw over the Austrian side last night return and drop some water a bit closer. The classic sections lower down are still fine, of course, and we’ve been having plenty of fun around Srpenica. Not sure if we have the group to do the slalom section, but there is talk of doing the Otona on Friday which is the only section (apart from Siphon Canyon which no-one sane runs anyway) I’ve not done. 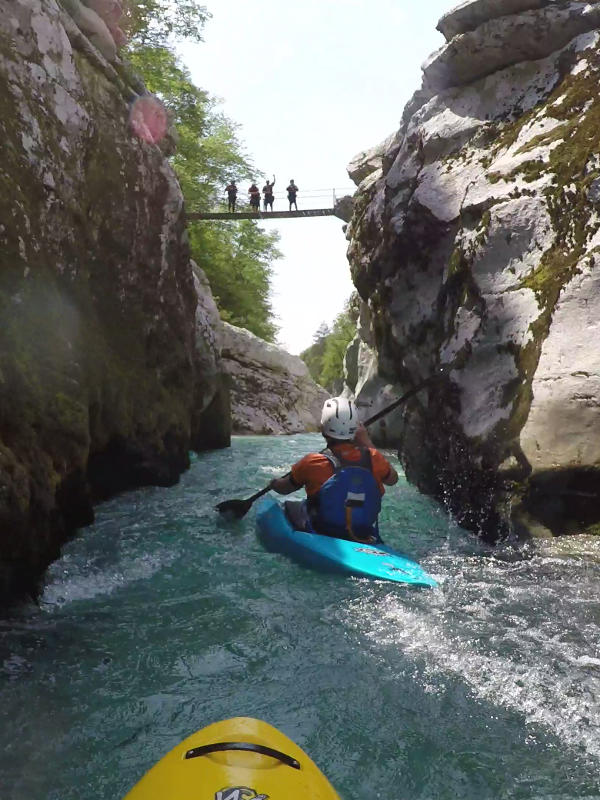