If you have been following the blog, you’ll no doubt notice that the boat shown on the Bute trip is the Nordkapp I bought in June last year. I haven’t posted about any of the trips this boat has done since the “New project” post, so I guess an update is in order. 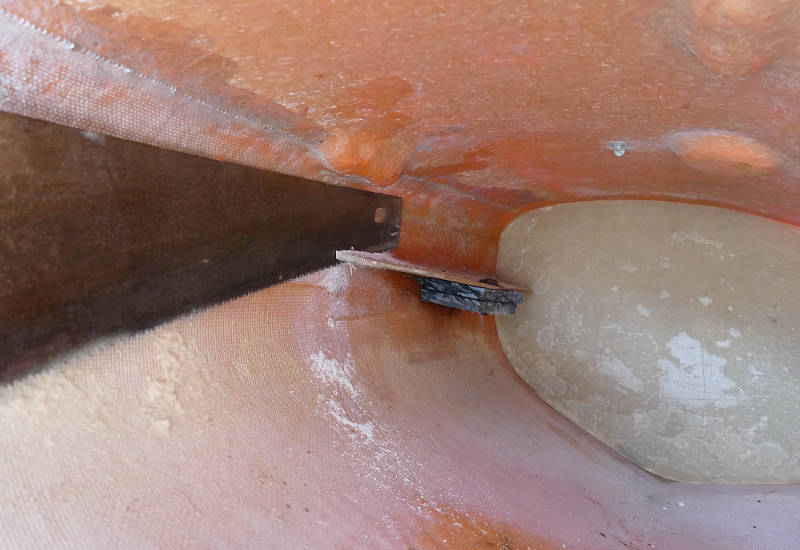 As expected, removing the existing footrests was an awkward job, working with a saw at arm’s reach inside a small cockpit, generating fibreglass dust. Taking out the forward bulkhead was even harder ! With both of those jobs done, the boat was no longer seaworthy, so adding a new front bulkhead was the next priority. Not being able to sit in the boat and measure to my feet via the front hatch simultaneously, I was a bit conservative about the placement of the new bulkhead, and it is an inch or two forward of the ideal. However, it still adds several inches more cargo space forward. With a two-inch thick piece of foam added, the boat is a nice tight fit for me, and could be sold on to someone a bit taller. I had decided not to add adjustable footrests as this would not increase the forward cargo space by as much, and I was wanting this boat to carry more kit than my others. 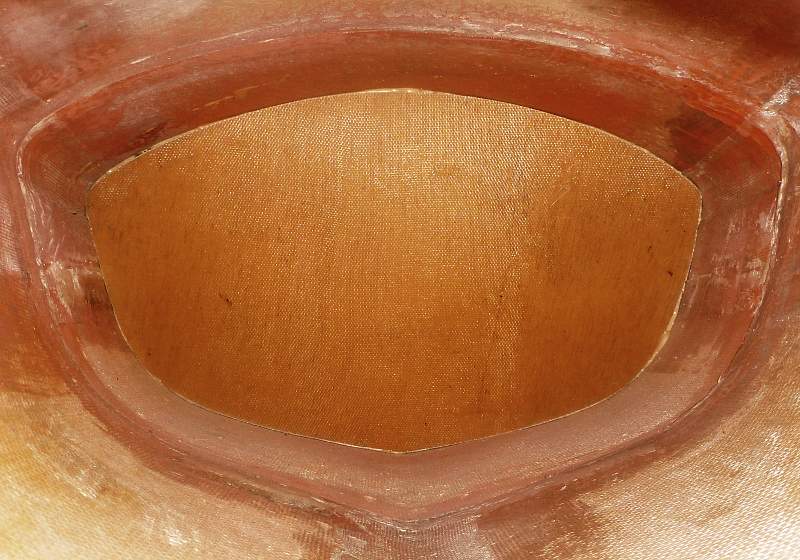 The new forward bulkhead seen beyond traces of the original bulkhead

I removed the seat and added a foam one, then put some little cleats at each side of the cockpit to add a backrest from an old whitewater boat and be able to tighten this up once in the boat. This is effective, but the amount of space to get your fingers in once sat in the tight cockpit wearing full drysuit etc. makes it very fiddly. Closed cell foam knee bumps, currently Gorilla taped in place to see if I have got the position right (the left one isn’t quite right yet), do ensure that the paddler is well-connected to the boat (which is easy to roll) and will eventually be made into something more robust and permanent. Current experience getting in and out of the boat has slightly put me off the idea of a knee tube, but this partly relates to the shoulder injury skiing last year, so if getting out of the boat gets easier the idea might resurface. The next job was to reduce cockpit volume by adding a bulkhead behind the backrest (and adding a day hatch to make that space usable for kit). There is a deck fitting in the middle of the deck which made the space available for hatch rather small, and as the deck is quite curved, I needed to fabricate a laminated wooden annulus, sanded to a curve on the underside, to provide a flat surface on which to mount the hatch. This proved a little time consuming, but did produce a visually satisfying result. Unfortunately, the hatch is not big enough for some of the stuff you’d naturally think to pack in a day hatch. It also seems to leak rather a lot, which seems to be that water is getting past the O-ring because I didn’t get the mounting surface flat enough. Some trips it hardly seems to leak, others it is quite annoying. That may relate to how much the boat get cooled down (reducing pressure inside the compartment) when putting on the water. More work needed here – the central deck fitting is really not doing anything useful, so I may decide to start again, build a recess, and go for a bigger VCP hatch like most modern boats have here. 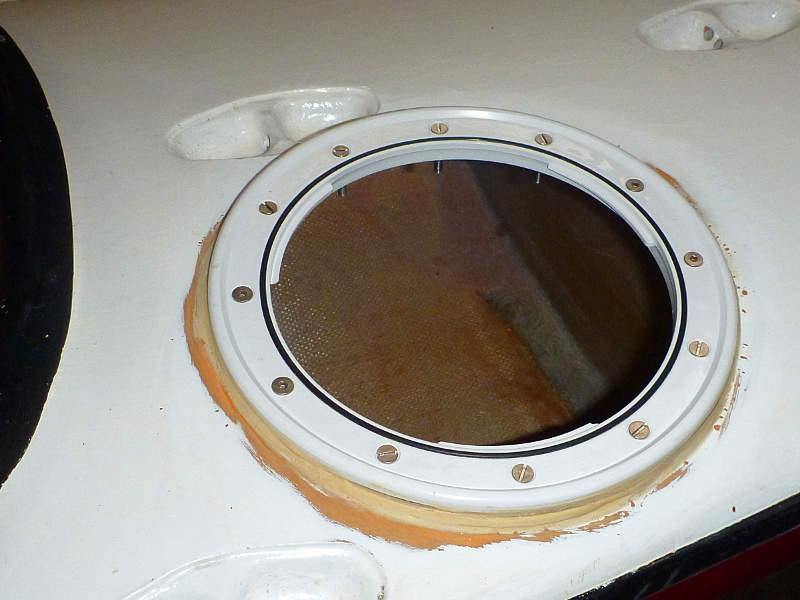 The forward hatch seems to stay almost dry, but the aft hatch also leaks a little. It is far from clear if this is a hatch cover not fitting tightly enough or if there is some leakage in the hull. As the hatch covers were supposedly almost new, a bit of testing is going to be needed here. I’ve decided that there isn’t space to fit the footpump. I’ve not converted the existing compass fitting into something for a GoPro, as I have just managed to obtain an old Sestrel Junior compass (for which the recess was designed) and will be fitting that once I figure out a way to keep it removable so it doesn’t get scratched during transport of multiple boats on the car roof.

It became clear when the seat was removed that the boat had a history of seating mods. Along with some paint removal inside, I also got rid of a lot of glass and resin which was not contributing to the structure and eventually sanded well down into the final layer of the original fibreglass. Then, when the bulkhead went in (made from three pieces of 6mm ply with 4 oz glass on the back) it was covered with a single piece of 6 oz glass that extended right over the seat area, compensating for any structural weakness that had arisen over that history. However, the boat is in a fully usable condition (as one would be packing stuff in drybags anyway) and has had a few trips out. First up was going to be a three day trip from Lochaline to Loch Sunart, so this first test was with the boat loaded up with a lot of kit. Conditions were windy, but there is not a lot of fetch in the Sound of Mull, so waves were small and choppy. Unfortunately, one member of the party wasn’t able to make enough progress into the headwind to get us to our intended camping spot. The wind was forecast to change the next day (which would give us a following sea and then shelter once in the Loch), but we were very uncertain of being able to complete the trip in time to meet another participant’s on-call commitment the day after. So rather than continue under time pressure, we aborted and headed back to Lochaline. The wind did indeed change, as forecast, so this was once again straight into a headwind. The boat was great, but not really very tested as the distances were short and the pace quite slow. I was now confident that the boat was stable when fully loaded, but knew that its reputation for being wobbly and difficult came mainly from people paddling them empty.

2018 saw a sea come-and-try-it day at Runswick Bay, so I took her out with no ballast at all. There wasn’t much wind, but there were waves and a little surf to play in, all of which she handled fine. I then noticed that a group of paddlers had decided to head across to Kettle Ness, and promptly gave chase. This demonstrated that the boat can be paddled quite fast, as I caught up with the group well before they reached the destination. Conditions were never really lumpy though, so not a great deal was proved here. The next trip was to be from Amble to Boulmer, via Coquet Island if conditions suited. The boat wasn’t quite empty (I took lunch and a few bits and pieces of kit) and conditions were quite windy, so were not deemed suitable for the addition of Coquet Island. However, we did get a surf landing (and launch) at lunchtime. Playing among the rocks after lunch exposed us to some surprise waves and a bit of reactive paddling in addition to the wind, and the boat continued to prove easy to manage.

With the addition of the Bute trip, I’ve now had the boat on the sea for eight days, two empty, six loaded, one solo. Despite not having an adjustable skeg, the boat is consistently close to wind-neutral, though she seems hard to turn up into the wind when loaded. The big fixed skeg at the back makes her track solidly when you want to go in a straight line (I’ve found it very easy to keep on a transit) but a lot of effort to turn when playing among rocks. She turns to a lean well when going at speed, but less so when moving slowly. Compared to say, the P&H Cetus which I paddled with a very heavy load in Alaska, she needs a lot more edge to turn, and doesn’t turn noticeably more easily on the top of a wave. So at some stage I think I am going to start paring away at that fixed skeg. Whether I then feel the need to fit a drop skeg will be an interesting experiment.

One of the ideas behind buying an old Nordkapp in the first place was to take the lines and use those as a starting point for my own boat design, to strip-build, assuming I liked the Nordkapp itself, of course. Despite the 1970’s description of the Nordkapp as retaining the rocker of the Anas whilst adding volume, I don’t think that really stacks up – the sheer line is really rather straight and the keel not as rockered as the earlier boat. Adding rocker will add stability, but also fore and aft windage, which makes wind-neutrality more trim-critical. I guess that if I derive a boat based on the Nordkapp but putting back (some of) the Anas rocker, I will end with a design which does need a drop skeg, but should be a bit more manoeuvrable among the skerries and a bit more stable for photography whilst still being able to pack gear for a long trip. Whether that also proves capable of handling the really rough conditions under which the Nordkapp is known to excel will depend on my acquiring the skills to get the most out of the Nordkapp and then tweaking the design successfully. Many hours of fun ahead !