Mountain biking has, to me, always been a form of transport – a way of getting to the end of a private road to start a walk or ski tour, a way to drag a trailer load of caving gear up to Gaping Gill, or simply a way to get somewhere. What I haven’t really done is ride a mountain bike as an end in itself. As an actual “sport”. So, apart from a bit of play-cum-training at Greenclose I’ve always gone the easiest route, rather than sought out difficulty or gratuitous excitement.

So it was with a certain amount of trepidation that I and Sarah met up with Johnny, Dave and Ant at Hamsterley, with a view to doing “some red runs”. The day started well when I walked to the pay-and-display machine, expecting to part with a significant fraction of my (so far untouched in 2014) annual ten quid budget for parking, when a passing motorist leaving the carpark handed me his now surplus to requirements ticket. Annual budget still intact !

After some faff we were off, first to the “training loop”. Here I ignored the seesaw – no relation to a natural hazard and definitely not something I approve of. The rest of the loop seemed reasonable enough, and after a while I thought it a good idea to turn on the GoPro. Thirty seconds later we appeared to have reached the end, with nothing interesting actually recorded for posterity. Ho, hum. Off to the other end of the forest then.

Despite the twenty year old rigid framed bike, I had no trouble in keeping up, or even staying ahead of these “young, fit” folk. The fact that I use toe-clips was no doubt a great help on the uphills… These seemed to be regarded as a bit dubious by the others, but as I had no intention of doing anything that might cause me to fall off, I had no qualms whatsoever. The fact that there were a lot of knee and elbow pads in evidence was just an attempt to intimidate me, I’m sure. Sarah seemed to find that they made excellent sweat retainers !

So, once up the long hill, we set off down the first of several sections of red run, linking the main forest tracks via steeper and narrower little trails. These seem to feature lots of constructed obstacles with the sole purpose of making the run more enjoyable / scary / difficult. At “red” standard, few, if any, of these were serious problems, but I did note that cyclists in other groups seemed to be taking them at considerable speed. Having spent quite a while gaining height, I didn’t wish to find that the more fun part of the ride was over in no time flat, so I rode at a much more sedate pace – no more speed than required to remain upright and on-line. This did mostly mean that I got plenty of time to see the nature of the track ahead as it wound between trees and round bends. I guess most of those haring down at some speed had an idea of what to expect from doing the run before. Or in Ant’s case not … At one point I came round a bend to find Sarah off her bike at the side of the track, having decided to portage this bit. It looked OK as I approached, so I headed on down without mishap. Further on came another rocky stretch, this time with a bit less warning, and it proved to be quite narrow. But, once committed, stopping and putting a foot down was always going to be a problem, so, toes in clips, off I went, staying pretty much on-line to the end, though I can see that a tiny bit more speed might have been an advantage here. 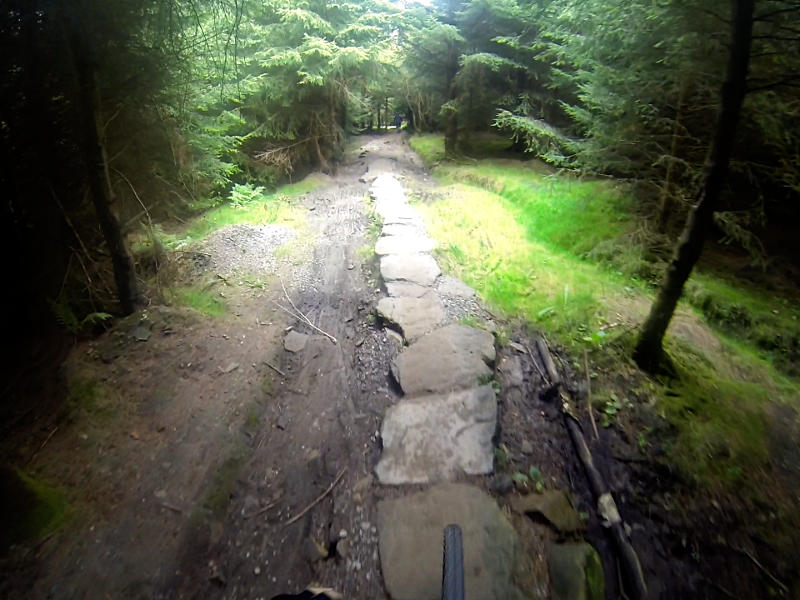 The only thing which caused any great grief was the boys’ tendency to stop to let everyone regroup. The trees always seemed just that bit too far off the edge of the trail to get a hand on, meaning that I was faced with getting a foot back into the toeclips each time we set off again. That’s not terribly easy on a narrow, non-straight, and somewhat bumpy trail and I think I’d prefer if we simply didn’t stop until on a forest track or equally easy bit. There was one bit where the only way to get my toe in was by leaning on a tree right above a steep rocky descent and I simply couldn’t get up to a safe speed from a standing start, so reluctantly portaged about ten metres here. However, we were soon at the end, and back to the carpark, with time to spare from Ant’s three hour hire period, so off we went for another lap of the training loop – this time with the GoPro running.