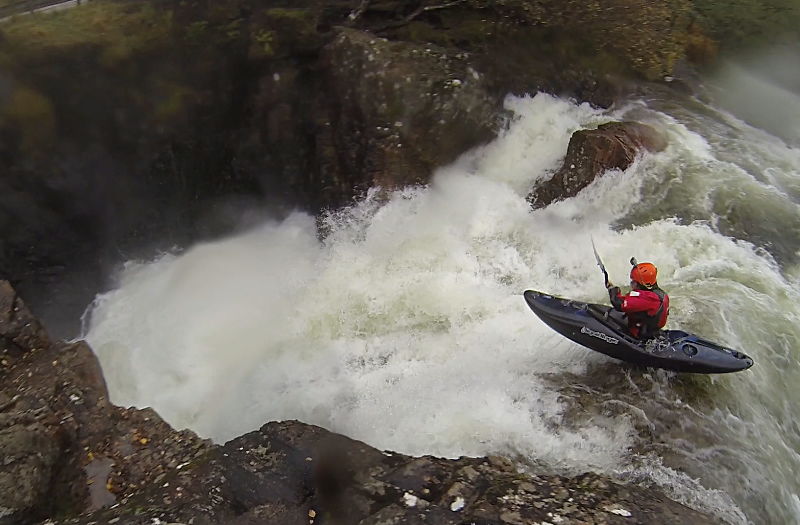 Michael got an excellent shot of me on the third step of Triple Step, near the start of the trip. 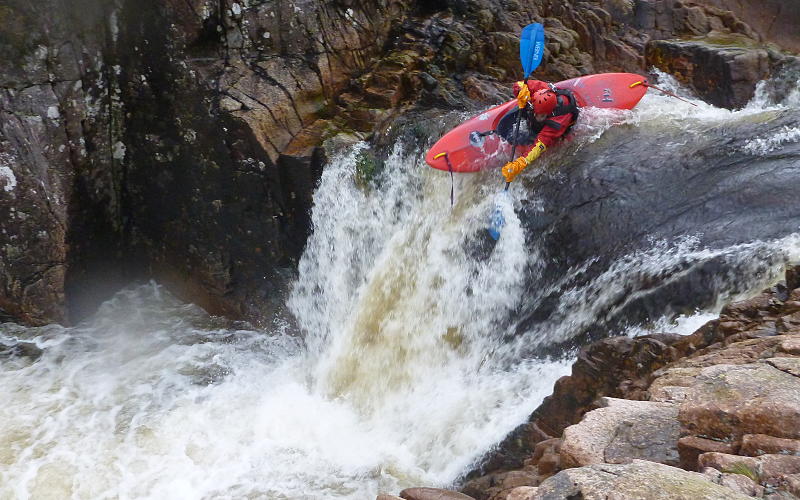 Mary was not having a good time, and got off after Triple Step, whilst Izi left us before Crack of Dawn. The rather surprising (and apparently very recent) addition of a car to the river does nothing for the scenic value – at least it looks removeable – this isn’t the Swale ! 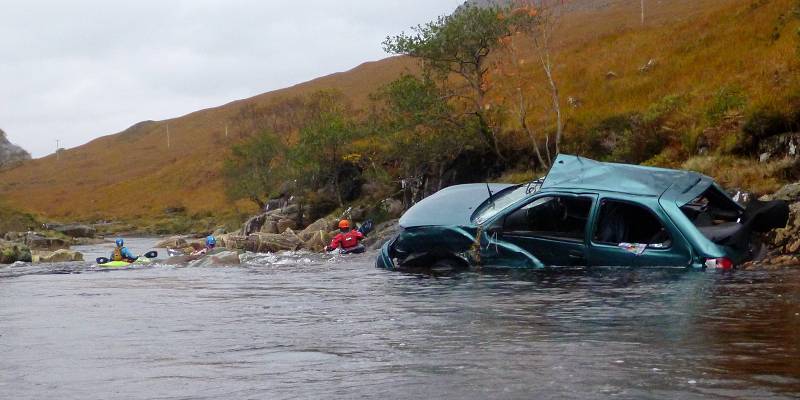 Both Michael and I were pleased with our runs of Letterbox and Ski Jump, but Michael decided not to paddle the first half of Crack of Dawn, and Lowri walked to put on in the middle to provide safety, so I found myself being the only one to run it. No pressure, then. However good line advice from Lowri, and getting exactly the line and paddle strokes I’d visualised resulted in success ! Crack of Doom was unfortunately not up enough to run, but had enough water to make the seal launch a little awkward, though we all survived, despite a bit of rock bumping. I’d forgotten about Rockslide until we arrived, but as the level was not massive, the hole halfway down held no unwanted retention problems and we all splashed down gleefully.

The weather being particularly foul, the level was rising as we paddled and Right Angle was at a ‘difficult’ level. Mike’s demonstration of how not to get round the right angle resulted in him going backwards over Big Man Fall separately from his boat (but remembering to brown claw) and me deciding to walk (well scramble) down. Then, on his second go when he nailed it from a seal launch into the eddy, I had not yet got the video running 🙁 I managed to miss the line on the last drop and slam very hard into the rock on the left. It’s sore, but I did roll up (eventually) ! We inspected the last rapid, as there was so much carnage last time (when I was videoing, not paddling), but we all got down this upright, and only I did any of it backwards… It was good to be at the end – the weather was now especially unpleasant – but that’s what fills rivers :-).

As the Etive was still likely to be bigger than our taste, and the Moriston release starts on Tuesday but not until 12, we first diverted ourselves with another run down the Arkaig, this time mostly in sunshine.

Then we headed across to Invermoriston to find the put-in layby at the Dundreggan dam quite busy. But a packed layby still provides a lot less river traffic than Wet West, and the boater-cross quality was thankfully missing. However, we did note that today’s release was more substantial than when we’ve run it before, on Wet West. This made the line on the top drop somewhat harder to hit, even though we could exit the top of the eddy which ought to have made it easier. Not quite my intended line on the top drop Michael now seeing the Moriston as a playground…

The big rapid towards the end was possibly easier at this level, but faster and no less intimidating. Lowri did this chasing Izi (who had joined us today) whilst I took a line chasing her boat (it wasn’t giving me a lot of choice). Michael eddied out to let the debris clear a little before styling his way down. The final few chutes and waves were also quite a bit more powerful, as we both chased Izi’s boat to river right opposite the take-out where we got it emptied. Tragically, I had pushed the wrong button of the forward-facing helmet GoPro for this section, and all I’ve got is a single still shot, in an eddy 🙁

We ran north to escape the storm, being mildly buffeted on the M6 and M74, then seriously rained on as we got into the highlands – this looked promising ! The Leny looked little bigger than when we ran it last year, but other things looked big until it became too dark to see. SEPA gauges were telling a mixed story this morning – lots of rain, but apparently patchy. We drove to the Pattack, which proved to be a good guess, as this was at a nice level, but probably no bigger than we’ve run it before. Mary on the drop, middle of the Pattack 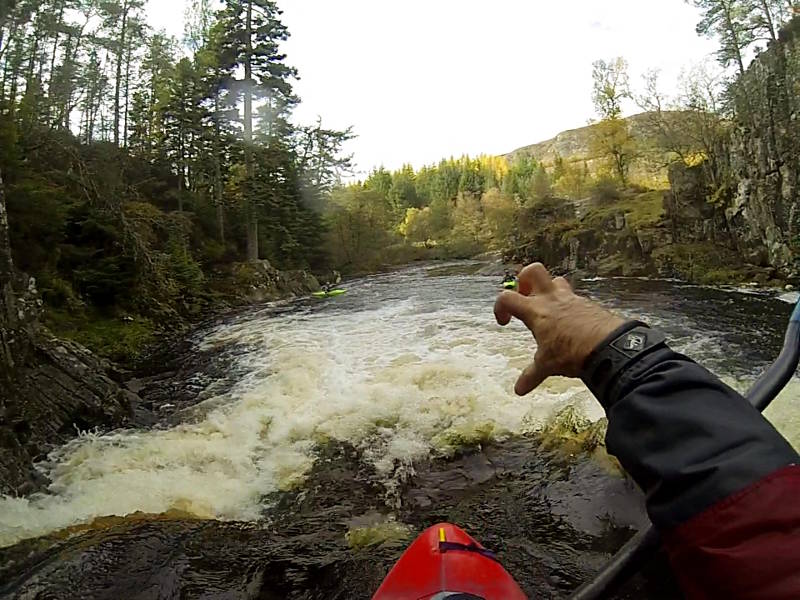 A brown claw on the final fall of the Pattack (OK, yes, so I had to roll up…)

Since the Pattack’s quite short and there was still time/daylight, we next headed for the Arkaig, which was well up (though the Chia-Aig was running clear and a lot lower than on the Sunday of the Wet West). As I’d reccied a lot of the Arkaig whilst taking the dog for a walk (whilst we were studiously avoiding paddling) back in September, I thought I’d seen the main rapid(s). However, just out of sight of our furthest point, lurks a good long, bouncy rapid with a drop at the end and, today, a lot of volume. Since I wasn’t expecting anything like this at this point in the river, it came as a bit of a surprise, and I had no real idea of line. I took a middle course between what I understood Lowri to have advised and where I could see Michael heading. Nudged by various stoppers and waves, then suddenly indecisive about what lay ahead, the line kind of picked me, rather than vice versa. Sliding sideways towards what looked like a big hole had not been part of any plan … but in fact dropped into water going very fast downstream which duly shot me out grinning and upright. Andy being submarined through, second run

So good, in fact, that we reccied it properly (from an island, which you can’t get onto until you’ve run the rapid once) and did it again. I took a different line this time, dropping from the highest point of the ledge river left and going deep in the aerated water, popping up upright and still paddling, grinning even wider ! Dropping in to the last drop on the big rapid (2nd run), Arkaig