So I arrived in Chile, made it all the way to Santiago airport where I met MaryKatherine, Isaac and Eric at the gate, after a long queue for immigration, and a difficult conversation with a woman at the baggage pick up, because my paddle bag (also the bag containing ALL my clothes) was still in Madrid!

We then flew into Pucon, where we met Dave and John at the airport, loaded all the bags and kayaks and kids into the trailer and car, before heading to base!

We arrived at Pucon Kayak Hostel and after being shown our rooms and some kayaks we’d be using (until ours arrived) we hit the water! We paddled the Lower Trancura, which although (in retrospect!) a very easy stretch, has big wave trains and I was extremely nervous. I was super tired because of jet lag, so after tea I headed straight to bed!

I woke up ridiculously early the next morning, and spent time writing and reading my book. Eventually other people appeared to show me where breakfast was. 🙂

We then kayaked, talked about how our lessons would work, learnt how to tie boats on the trailer and threw throwlines. A busy day of learning how things worked around the hostel before we started school.

A couple of days later we headed up for our first run of the Upper Trancura, which was pretty exciting, but also scary, as it was a new river again. My nerves were up, but I had a good run, and ran Garganta and Feo first time after scouting.

I’ve now (nearly two weeks later) run this run a LOT of times! The Upper Trancura is like our training ground, and today we (we being the development group consisting of MK, Will and I) even ran the bottom half of last laugh! Fun times!

In the time between getting here and me (finally) writing this first blog post there’s been a lot happening. We start the day with a morning workout, followed by breakfast. We then normally have lessons in the morning, and then go kayaking after lunch. We’ve also been having salsa dance lessons twice a week, which is actually really fun, but most of the guys seem to hate. We’ve got the bus into Pucon lots, and we even drove to get firewood from a local farm as one of our Spanish lessons.

So far the development group has only run the Upper and Lower Trancura, the Leacura (which flows into the Lower Trancura) and the Upper Palguin down to above the crack drop. We have only paddled the Palguin once, and the trip resulted in Will going over a waterfall upside down and making a hole in his lower lip (all the way through!) and having to go to the hospital. 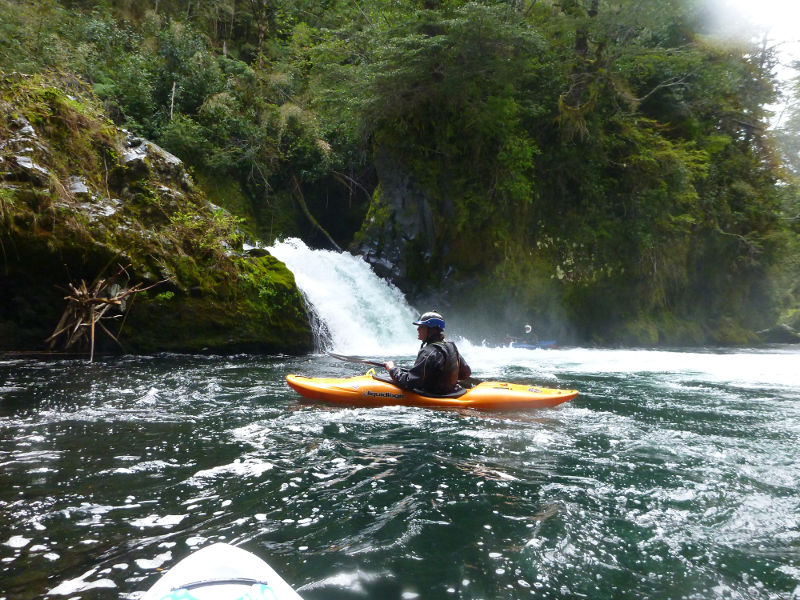 Bottom of the first drop Bottom of the 20ft waterfall

We are planning a trip to the Fui this weekend, with video lab en route! Getting back in time for Dance class on Monday and an Ensada (BBQ?) thing with some Chilean ‘English students’ afterwards.

So Dad managed to fix my blog so I could log in and out properly again, since I managed to delete half my links and things (oopse), and added a link to his own blog. Having been writing stuff for longer than i’ve been alive, it didn’t take him long to make his blog span back a VERY long time. Since I wrote all my last post at once, and it’s supposed to cover my entire life, it was a bit brief in places, luckily, Dad was there for most of it, and for more of my earlier adventures such as Utah, sea kayaking and walking in New Zealand, there is plenty of detail over there, so go check it out!

I started Kayaking when I was pretty young. I’d like to think I’d been doing it forever and ever, and I guess I have been on the water or in the outdoors since I was born, seeing as no longer being pregnant the first thing mum decided to do was travel to the Pyrenées with me, strapped up in a rucksack on her back, whilst dad carried the heavier but quieter and less wriggling food and tent, where me and mum were Avalanched! (Oh shit man! But we were okay… I mean I was probably asleep and everything…) Shortly followed by a holiday to Utah! Being a very tiny child I was in all honesty, too small to paddle around in the large plastic things those big people (adults) called kayaks, and so I would be bundled up in fleeces, hats (my favourite hat was a little strawberry hat… very cute!), gloves and coats. I was then put in the front of a large open Canoe, whilst mum paddled me around and, most of the time, I just slept.

I have been asleep in the front of an open boat or double sea kayak in some of the most incredible places!! If only I was awake to see them! 🙁 Beautiful scenery but half asleep!

When I was finally deemed big enough to be allowed my own kayak, dad had conveniently been busy making me a strip built sea kayak! WOW, what an amazing christmas present! However, sea kayaking obviously wasn’t my thing, even from a young age. I wanted big waves, waterfalls and adrenalin! (Well, actually I just didn’t like feeling sea sick or the wind), and so my adventures in the realms of whitewater began.

In the beginning, I was carefully introduced to plastic kayaks, along with my little brother Michael (who was big enough to keep up with me by then), with dad holding on to the end of a throw line, ready to jump in whilst we took it in turns to paddle around, having a whale of a time! (despite ill fitting kit) 🙂 Loving kayaking from an early age

Already the family was becoming more enthused by kayaking, and so we were off on a family trip to paddle the river Spey in Scotland by the time I was 9 years old. We also headed out to the Ardêche Gorge in the Massif Central in France in the summer of 2008, literally a river of plastic there were so many tourists! But we still had an amazing time, and I even did one of my first whitewater rolls! Rivers of plastic and people?

Since then we have been out to the French Alps 3 summers in a row, the first year staying with Canoe control (not our best experience, but we won’t be mentioning that), but despite difficulties, we did however meet Bill and Nicki Norman, possibly now some of our closest paddling friends! Who have both been massive influences and provided ample encouragement throughout the time I’ve known them. The second two summers we met Lowri Davies out there for some awesome coaching, and spending the summer with amazing people, these have been some of the best times of my life.

I’ve slowly been increasing my grade of paddling, and that third summer we finished off with the Lower Guisane, a lovely continuous grade 4, not too difficult but just lots and lots of places to trip you up! It definitely pushed my concentration, without being so scary we even needed to get out of our boats, read and run grade 4… fantastic stuff!

Learning to surf on lovely blue water in the sunshine

This summer, our crown jewel of awesome family kayaking holidays (so far 😉 ) we spent two weeks paddling on the Nile with Lowri to look after us. BIG BIG BIG!!! HUUGEE in fact! The Nile’s beautiful warm water and massive waves (and boils!) were a fantastic experience, and we all had an amazing time, learning some freestyle (mostly just flat spins to make you dizzy though) and dealing with the totally different style of water. Huge waves on the sunny Nile

I then spent the next several weekends paddling in Wales with my mates Nicky and Andy, mostly on the Tryweryn, but one wet weekend we got on the Cwm Llan, it looked pretty steep and scary, but after carrying my boat half way up snowdon there was no way I wasn’t getting on that river!! So having watched Nicky paddle it, minus the very top bit, get stuck in a hole and finally make it down to the top of the bottom drop which is pretty nasty (so we weren’t paddling that bit), Andy got on, in the same place, he managed to get all the way down, avoid getting stuck where Nicky got stuck and got to the second last drop, and fell in, with rubbish hip pads and a wee bit of panic because of being above the nasty drop he had a quick swim, with Nicky promptly fishing him out. 🙂 It was then my turn, and, having watched them both have problems I was still feeling remarkably calm, so I got on, following Nicky down again, aaaand instantly got myself stuck in one of the first (small, but retentive) stoppers, sitting in it for quite some time, with several rolls, I finally managed to get myself out without going for a swim! 😀 and continued to paddle down the other drops, having to roll after most of them :/ but staying in my boat and actually surprising myself with a good boof on the last drop to get myself quickly into the eddy and hop out. The boys then went and paddled a pretty full Aberglaslyn Gorge, but I decided not to get on due to chunky holes and owning a little play boat, I decided I’d had my fill of getting stuck in holes for the day and proceeded to walk down the road and take rubbish photos. 🙂 Falling off the side of Snowdon The beautiful sunset over Llyn Celyn

It was then almost my 18th Birthday!! (YAYY… I was about to become an adult… meaning I could do things I’d been doing for sometime and it would actually be legal!) So after a pre- birthday party the weekend before, we were headed up to the Wet West Paddle Fest, for an awesome 5 days of paddling rivers: The Spean Gorge, Arkaig, Pattack, Moriston and the Orchy. Sick birthday!!! 😀 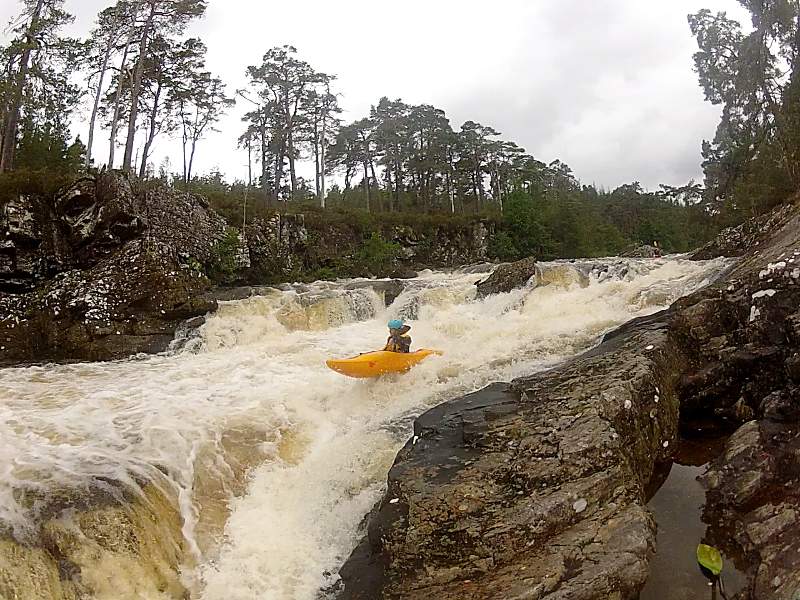 Blasting down the Moriston on the Saturday of the wwpf!

I have tried several times to make a blog, and remember to keep updating it and actually writing things, anythings!!
So far I have failed in epic proportions, but hopefully i’ll actually remember to write stuff on this one!!

But you know, since i’m going to Chile and everything at least i’ll have lots to write about, and if I get round to it before I go, I might even put some stuff from my summer in Uganda, or my birthday weekend at the WWPF on! 😀