Knoydart has been on my list for years – isn’t it on everyone’s ? But every time I’ve planned to go there the forecast has been dire and the couple of times I’ve driven towards the area without having heard a forecast, the heavens have opened as soon as I got close.

This time we were committed by having booked Kilchoan Estate’s Druim Bothy for three nights, along with the Inverie ferry to get us in and out. It was rainy on the way up to Mallaig, quite dismal while we were having our Friday night meal, and it started to rain heavily as we were on the way back out on Tuesday, but the three days in between were as good as one could reasonably hope for. It’s a five kilometre, fairly level walk in to Druim Bothy, so just a stroll, even with heavy packs (for the second weekend in a row, I’d taken far more food than I could actually eat). Once established and unpacked, three of us (myself, Mary and Linda) decided to bag a peak, whilst the other three (Chrissy, Ursula and Kath) opted for a valley walk. Starting at 2:30 in the afternoon, we were trying to push the pace a bit to avoid being back late, and perhaps the ascent was a bit too rapid, but we got ourselves up the pathless SE slopes of Sgùrr Coire Chòinneachean and onto the 796m summit in 2¼ hours, well inside our turnround time. Taking things a little more easily, we trooped on down the splendid SW ridge, with Inverie seemingly directly below our feet (700m below and 2km away in the photo above). Like many Corbetts, this was a really fine viewpoint with Skye and the Small Isles ahead of us, Ben Nevis away in the distance to our left, and many more high peaks in almost every direction. We’d slightly misunderstood the Corbetts guide description and thought a deer fence was pushing us too far to the West, so we crossed this and dropped down some rather unpleasantly steep pathless terrain to the Allt Slochd a’Mhogha, but once by the stream, it was a short and easy hack along the bank to the main track, and saved us over a kilometre compared with finding the correct path, so it worked out for the best. From here the just over 3½ km route back to the bothy was the same as our earlier walk in, so was dismissed in a short time, getting us back soon after seven, and before the valley walkers returned from Mam Meadail. Our numbers were made up by the late arrival of Pete who had sea kayaked in to join us.

There is no shortage of Munros in greater Knoydart, but even with a base in the area, most are long walks. Ladhar Bheinn was being kept for an approach by sea, so that the round of Coire Dhorrcail can be done, whilst a group in the east were too far to do from here (and the bridge over the River Carnach was out) so I have a paddle-in plan involving Loch Quoich for those. That left us the two central ones, Meall Bhuidhe and Luinne Bheinn. Whilst one pair set out to do a more leisurely version of our walk of the day before, the “A-team” set off at a cracking pace to bag the pair. Mary and I followed at a more sedate pace, being quite sure we could bag the first, but not convinced we (well, I) wanted to do the longer version. 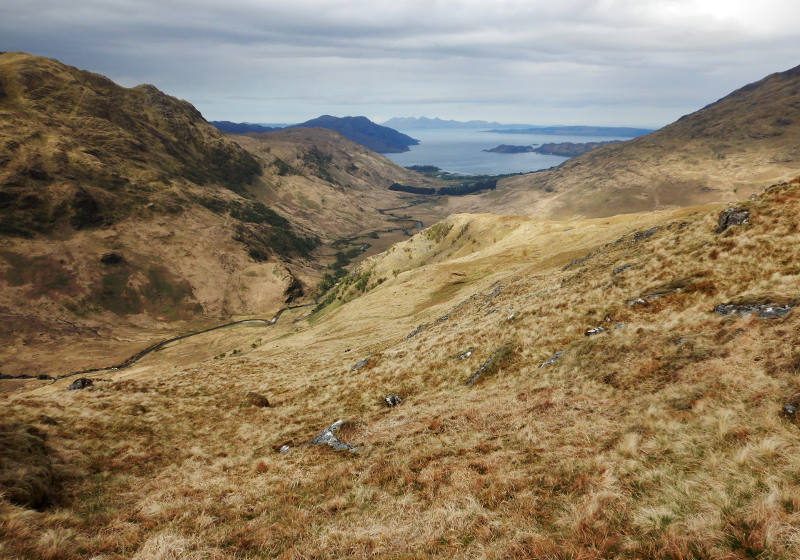 Looking back towards the bothy from the slopes of Meal Bhuidhe

The ascent was pathless, but not too rough or wet, and soon enough, we were on the 826m outlying western point, by which stage a decent, if at times faint, path had appeared – and we could see the A-team on the final summit ridge about half an hour ahead of us. 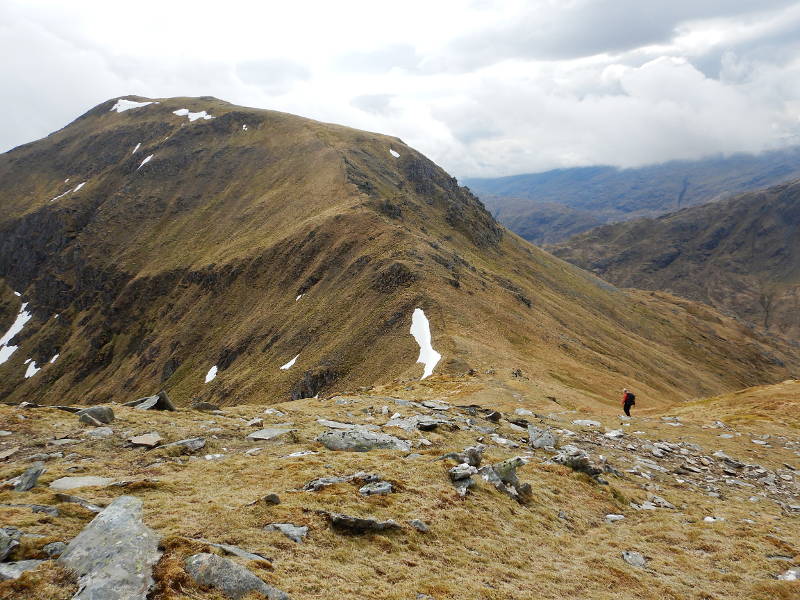 The 60m loss of height in the bealach was not appreciated by everyone, but the path improved and three hours total saw us on the summit. This, at 946m, is barely higher than the eastern top (942m) which we visited next, and which is craggy enough to look almost as if it was the “real” Munro. The short ridge between the two tops of Meall Bhuidhe

Beyond the last top, we parted company from the longer route – a distinct path headed northeast towards the Bealach Ile Coire, and the others were long gone along this. A much fainter path could be seen heading southeast towards Sgurr Sgeithe, and we threaded our way down this way until the crag-encumbered slopes to our south became tenable. We avoided all scrambles and odd Haggis traps to reach a traverse back to the Mam Meadail with essentially no height loss, and then headed down the good path, 5 km or so back to the bothy where we arrived first.

Having taken the easier option on the second day, I was definitely up for the big Corbett to our south, Beinn Bhuidhe. Since Linda had found a guidebook description of a shorter route than the full west-east traverse, it turned out that everyone else was up for this walk, too (except Pete who was sea kayaking out today). We took a fairly direct though possibly not optimal route up towards the ridge. Not optimal in that we crossed a deer fence easily at the valley floor, but then had to cross back out in the coire where there wasn’t such an easy way over. There are no paths at all here, and it turned out that this area was so little visited that I was able to claim a geograph (first) point which was an unexpected bonus. As a big mixed group we took our time up Coire Gorm, and eventually reached the ridge via a small snow patch, about half a kilometre west of the main summit, which was then an easy ascent. Approaching the top of Beinn Bhuidhe from the west.

Despite a little more cloud today, the ridge provided splendid views over its entire length – which was a little more up-and-down than some had hoped for, with a very well-built cairn on one rather random point not much higher than the ridge either side. 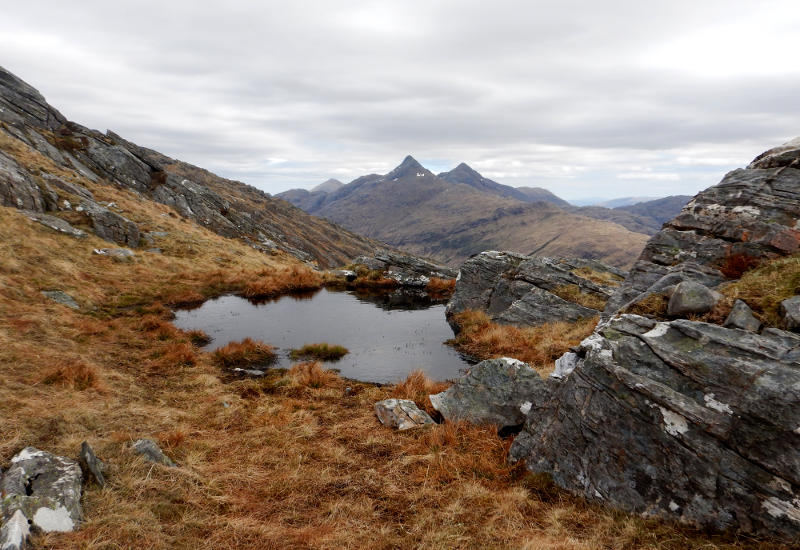 Looking east to Sgurr na Ciche from a little lochan along the ridge.

From the final point, Meall Bhasiter, steep ground dropped to a little lochan with a choice. Mary took the left whilst the rest of us decided it looked easier to traverse right, avoiding what looked like rather rough ground. Mary won this one, but we were soon all reunited at Mam Meadail, with the same descent to the bothy as yesterday. My legs had definitely taken the hint to get fitter, and made double the pace of the previous day despite a longer walk overall. In fact it got a teensy bit competitive at the end as Mary tried to out-sprint me the last 50m. The others took a somewhat more leisurely approach and arrived in two subgroups up to half an hour behind.

We walked out to Inverie Tuesday morning, and the inevitable rain came in as we were crossing back to Mallaig. Perfect timing for our weather window !