Famed for midges and incessant rainfall, Scotland was an obvious destination for early in the whitewater season. We had confidently planned a weekend at Pitlochry for September, after the midges had retreated and when the first autumn rains were expected to be building on the minimal respite of the summer.

Driving up early, in time to get a look at some rivers in daylight, it soon became apparent that our confidence was unfounded. The Braan had only a trickle – not enough for the proposed hydro scheme surely ? As other paddlers arrived and squeezed into our chosen hostelry, Penny reckoned that Rannoch Moor never dried out and that the oozing peat kept the Garbh Ghaoir paddleable even in a drought. Failing to consult the guidebook in enough detail, we believed this and in the morning drove the vast distance up the Tummel, and on to Rannoch station – pretty much on the west side of the Highlands. At no point could we see our river from the road, since the take-out involves a paddle across a loch at the end, and the put-in is reached by some remote trekking across the moors. Dragging boats for some considerable distance over the peat and heather, we eventually arrived at some water, where we cooled off a little by putting on to a lochan and set off to find its outlet. This proved somewhat elusive at first, but eventually we found a very small stream leading away in the right direction. To suggest that this was a bit of a scrape was akin to describing sandpaper as less than perfectly glossy – and the effect on boats was not dissimilar. We could see where the lines would be – if the rocks were a little wetter…. Soon we reached the first of a number of pools where the was enough water for at least a small amount of paddling on the flat. However, many anglers had also found that these were the only places deep enough for a fish, so we thought it tactful to portage most of them. The result was a splendid walk, spoilt only by the burden of dragging kayaks and the tedium of the flat paddling on the lochs. At least it wasn’t windy – ah, but that did mean that the midges had not hibernated yet…

At this point, desperately in need of some cooling water, we drove round to Grandtully and played on the slalom section of the Tay. Some of the group went upstream to Aberfeldy and ran an easy section of river down to Grandtully, but most just did park and play, doing two or three runs down. 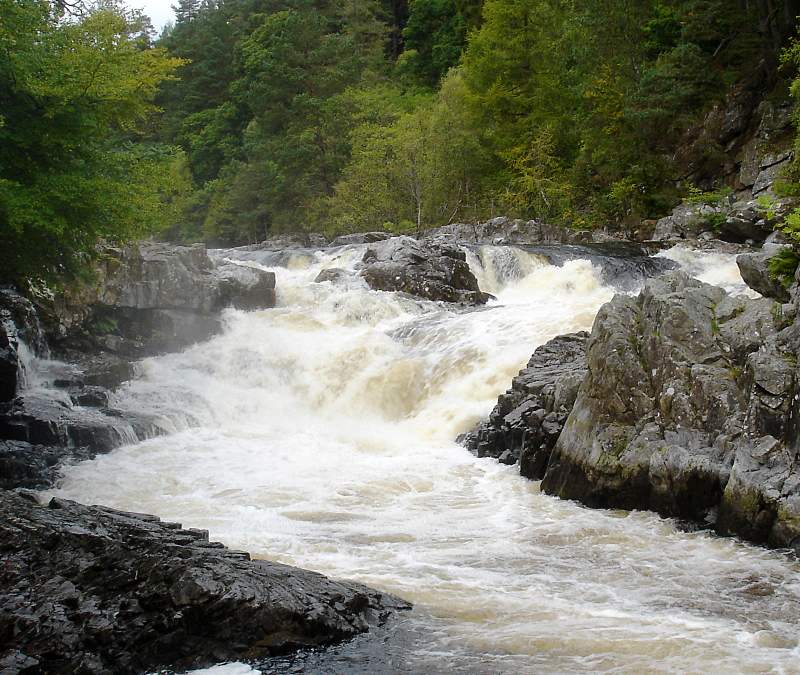 Dam-release can save even drought-stricken trips – Linn of Tummel

Fortunately, for Sunday, we had a more reliable scheme, as we had found that maintenance work was causing a continuous release on the lower Tummel. Whilst less than a full release, this was nonetheless sufficient for a decent paddle, as long as we could dodge the rafting companies, both on the road and on the water. With some bank inspection and safety cover, this took time enough to feel longer than its reported 4 km. We got overtaken by three rafts on the first section, but then watched them portage Sawtooth rapid which we were able to run, although at least one kayak managed to find the eponymous pointy rock in the middle. Not everyone fancied the final drop at the Linn of Tummel and eventually, only Pete Ball ran it, so with no-one else on the water below it is perhaps fortunate that he had no bother in rolling up in the loch !

The Tummel provided footage for one of my earliest videos – DV tape in a not remotely waterproof camera means there’s only bank footage, and the big rapid early on doesn’t appear, as we didn’t get out of the boats.